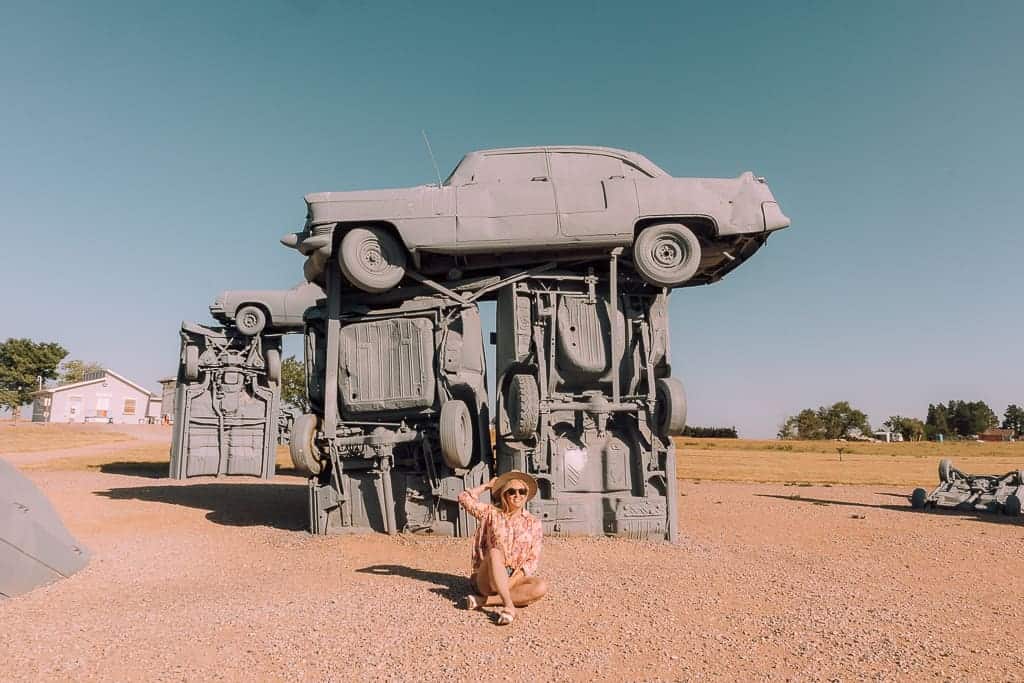 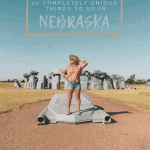 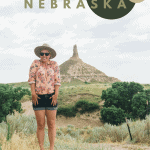 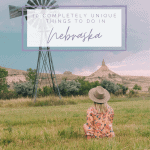 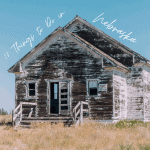 What is typically referred to as a “flyover” state, I refer to as one of the most underrated states in the USA.  Nebraska is a unique destination that hosts a variety of things to see and do whether it’s visiting a quirky Nebraska attraction or driving along some of the most beautiful countrysides in America.  In the summers spend your time in Omaha at the College World Series, an annual 2-week baseball tournament.   In the fall spend your time at Vala’s Pumpkin Patch & Apple Orchard, a family-run establishment celebrating all things fall.  In the winter head to downtown Omaha to ice skate on the outside rink in the Capitol District.  And in the spring complete the beautiful Sandhills Journey drive.

And while Nebraska is smaller and less recognized than many states across the US, I don’t doubt that it is still one of the most uniquely fun and beautiful places in America.  When you visit, come with an open mind and an open heart; realizing before that it is certainly no LA or NYC.   Instead, it’s a down to earth place full of incredibly friendly people waiting to show you around and brag on their cornhusker state.  No matter when you choose to visit, here are 10 completely unique attractions that Nebraska offers (that you won’t find anywhere else)! 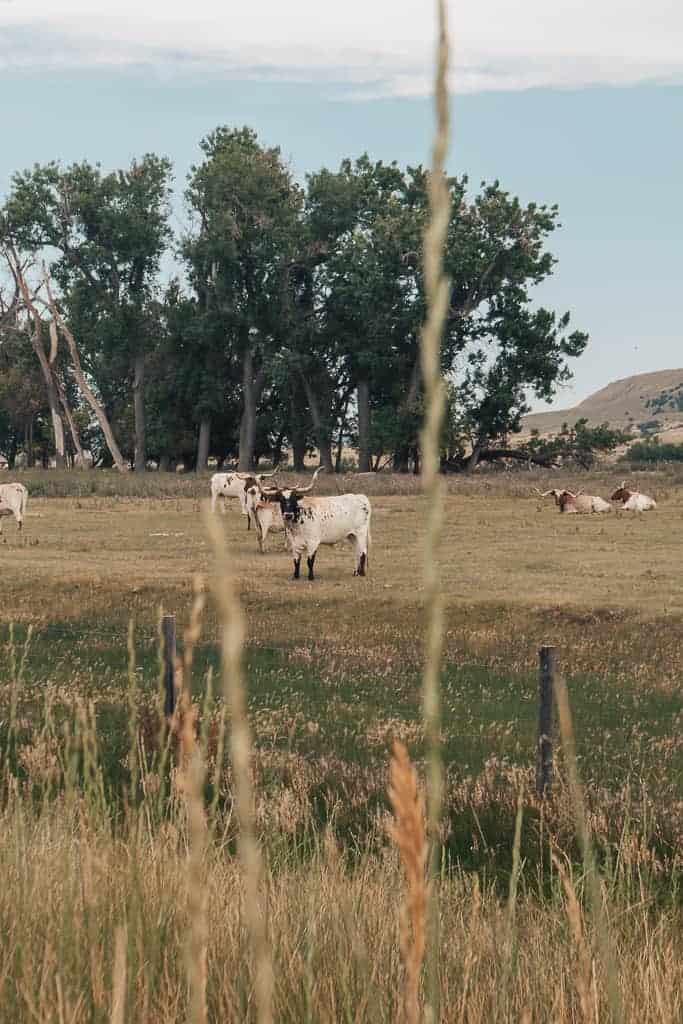 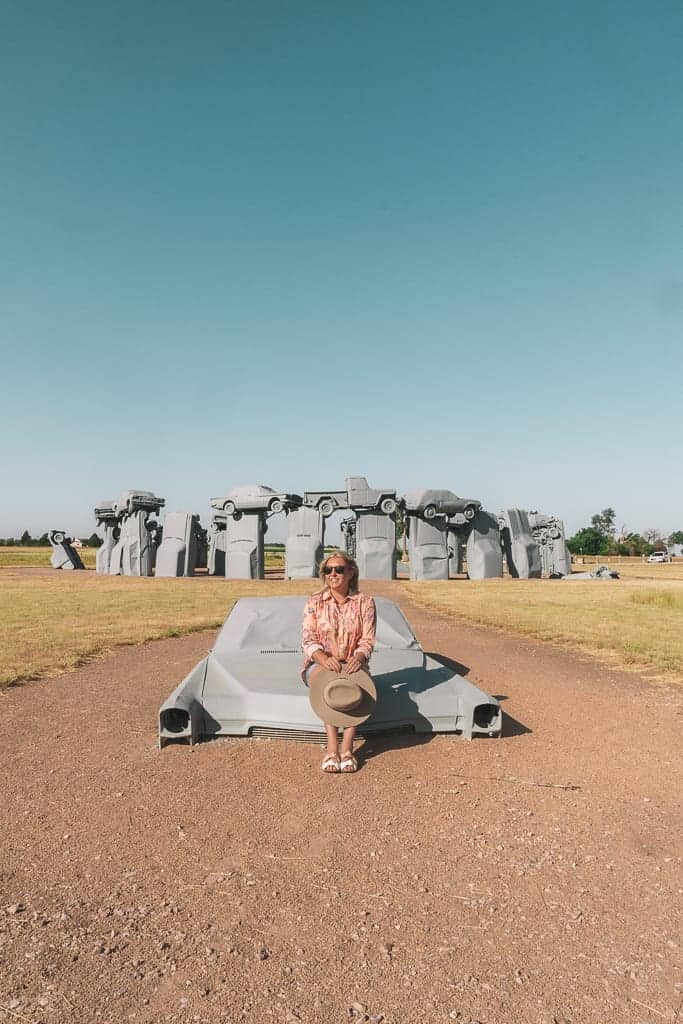 The highlight of the small town of Alliance, and also what draws most people to town, is the bizarre attraction – Carhenge.  Carhenge is a monument made out of vintage automobiles and replicated after Stonehenge in England.  The monument was built by Jim Reinders in 1987, who has studied Stonehenge for years.  He built the monument for his father and made sure that the cars were sized and positioned exactly how the stones are at Stonehenge.  Entrance to Carhenge is free and it’s open year-round.  In 2006 a tourist information center was built outside of the monument where you can buy kitsch souvenirs and learn more about the sculpture.

When:  September-November (dates vary each year) 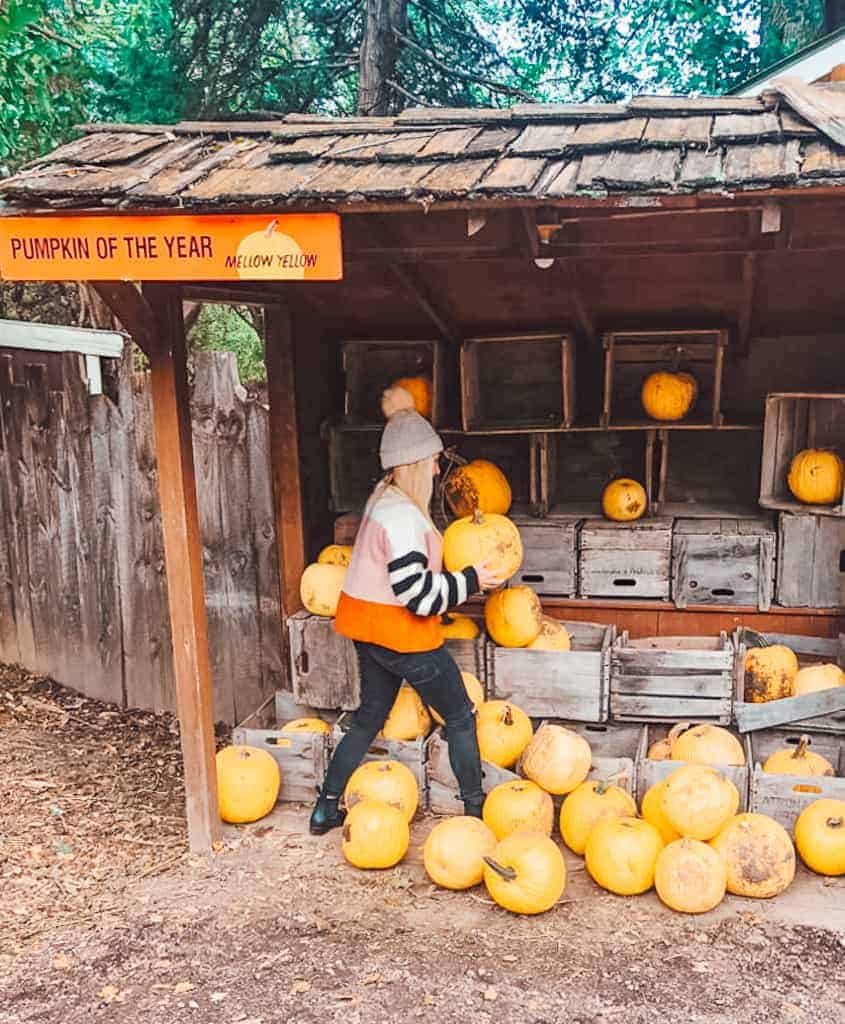 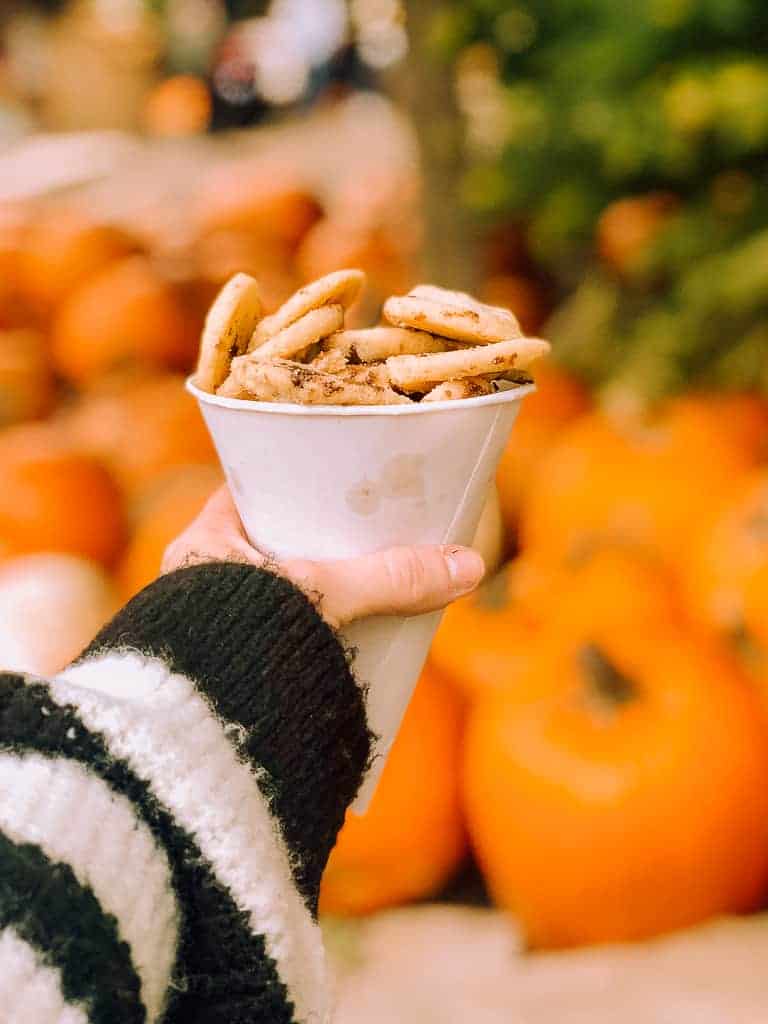 While you can visit a pumpkin patch in almost every city and town these days, there aren’t any quite like Vala’s Pumpkin Patch.  A family-run patch and apple orchard, Vala’s has continued to grow and thrive for 35+ years.  With haunted houses, corn mazes, pumpkin picking, fall treats, warm cider, and fire pits; you could spend hours at Vala’s walking around the 55-acres of land.  To enter Vala’s you’ll pay a fee, which varies depending on age and when you’re visiting.  The patch is open in the fall around September-November, but dates vary each year.

3. Be in Two Places at Once on the Bob Kerrey Pedestrian Bridge 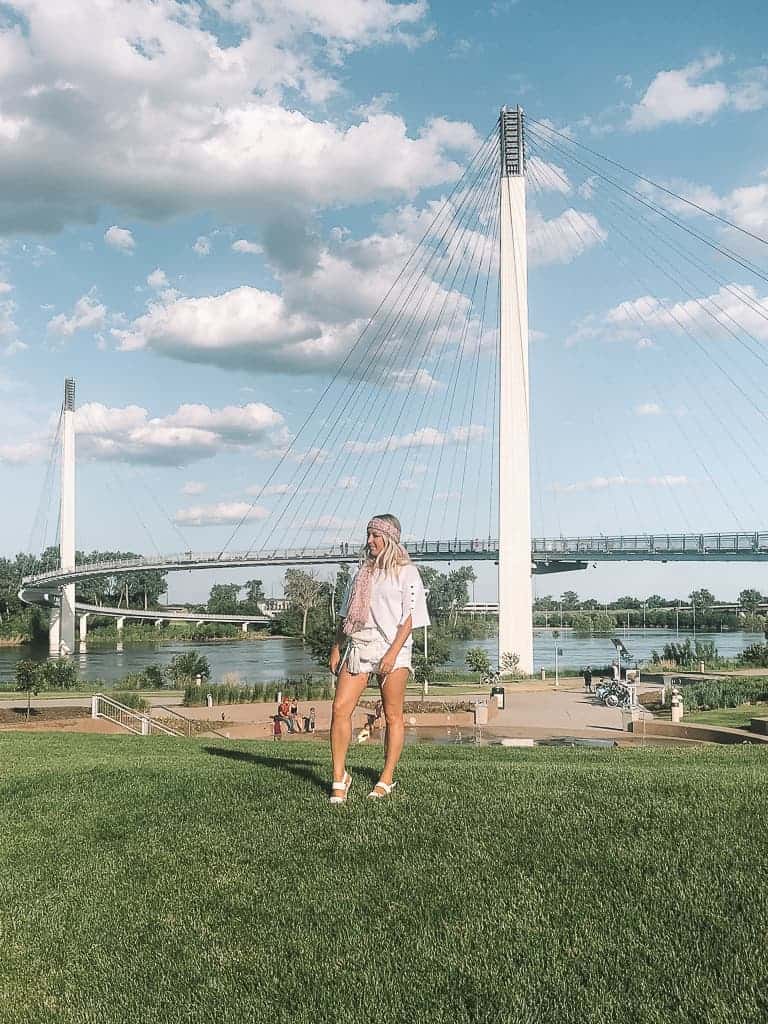 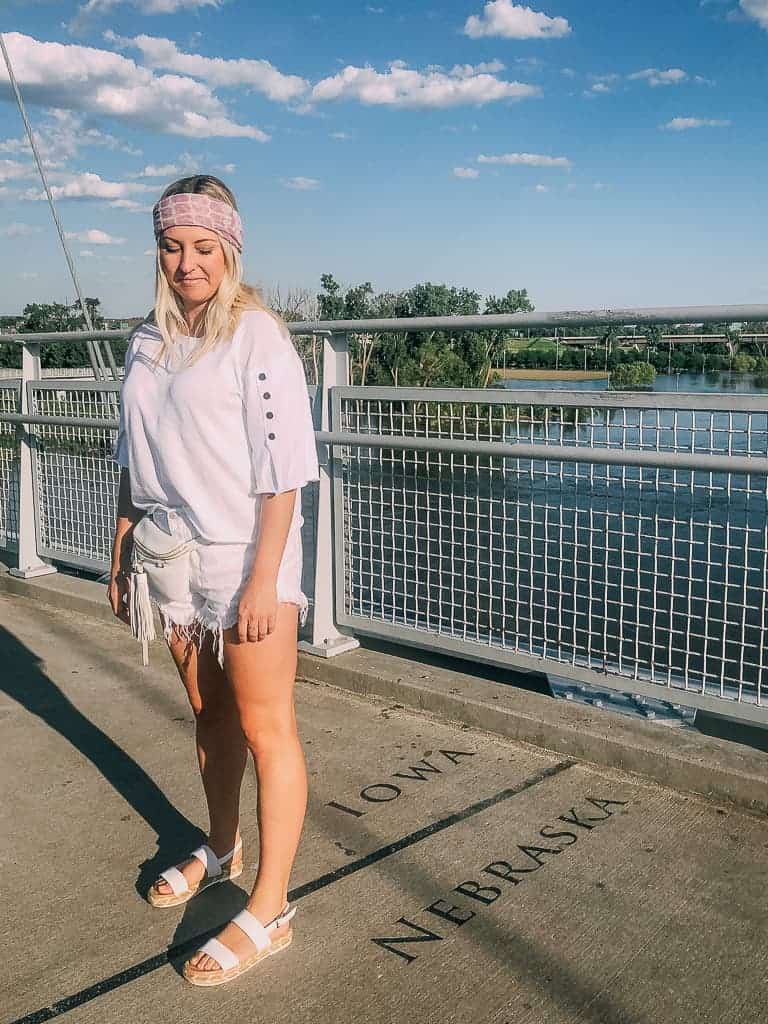 A 3,000-foot footbridge, Bob Kerrey spans across the Missouri River connecting Nebraska and Iowa.  You can walk the length of the bridge crossing off two states – at once!  There is a marking on the bridge to let you know when you cross states; by putting one foot on each side you can truthfully say that you’ve been in two states at the same time.

4. Learn How America Came to Be at the (Creepy) Pioneer Village 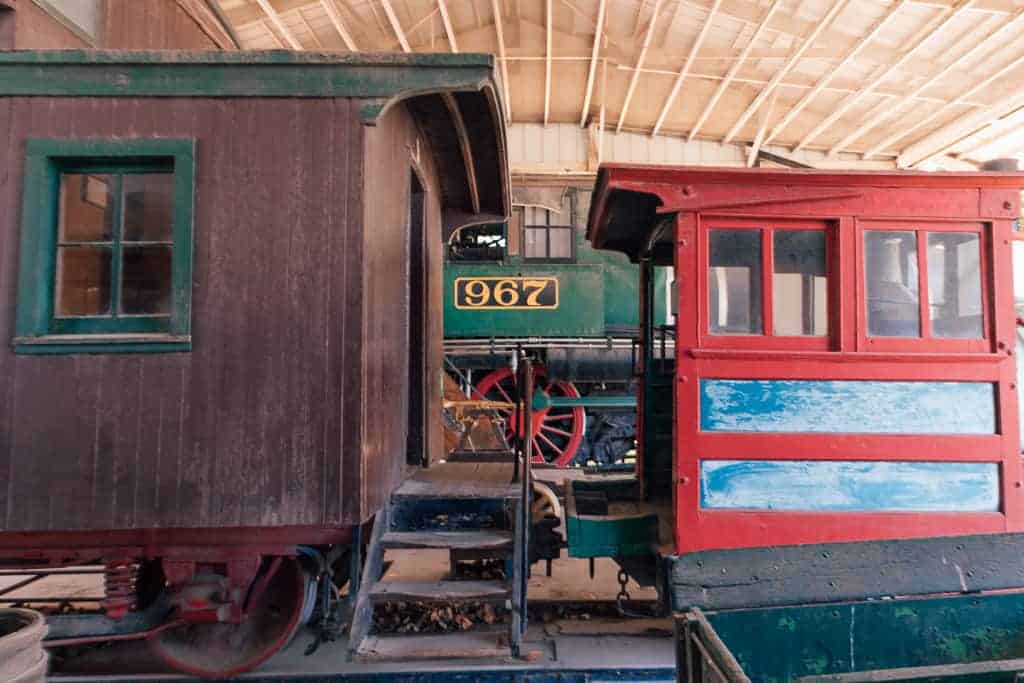 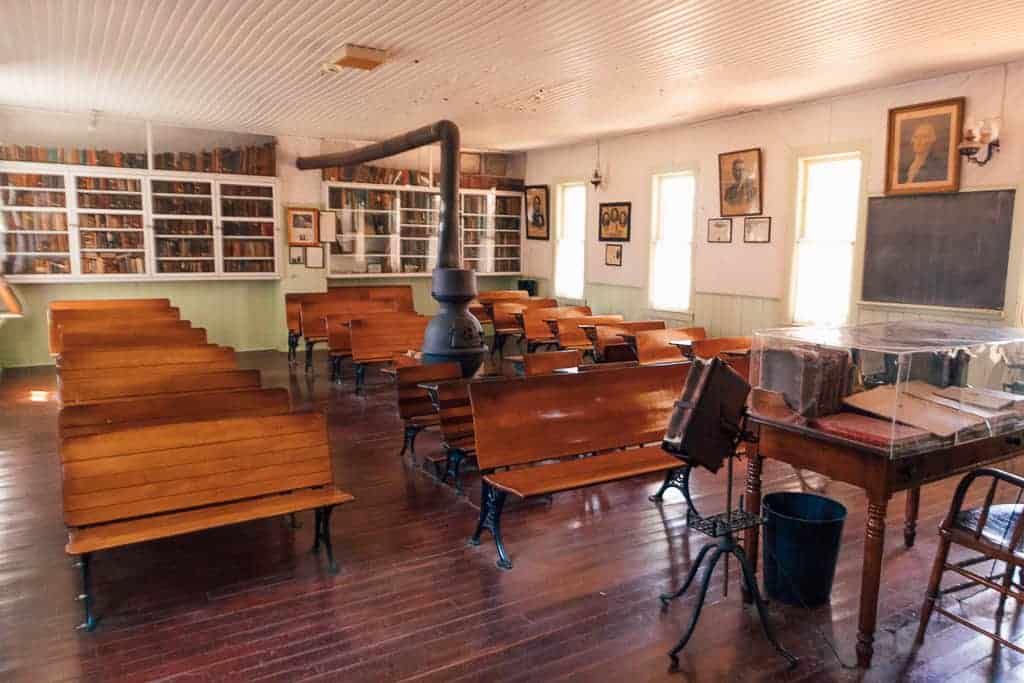 One of the most expansive museums I’ve ever visited, the Pioneer Village details what it was like to be a settler in America.  Built-in 1953 by Harold Warp, Pioneer Village sits on 20 acres of land, has 50,000+ artifacts, and is made up of 28 different buildings.  You’ll be surrounded by replicas of clothing, cars, room décor, and more; giving you a very real feel for life from the 1800s to the 1900s.  Not only are there tons of items to sift through in the museum, but there is an outdoor village you can walkthrough too.  The village is made up of a house, classroom, church, diner, and more.  All of the buildings in the village are made to be interactive, allowing you to walk through and learn what life was like back in the day.

Expect to spend at least 2 hours at the museum.  Entrance to the Pioneer Village is $14 for adults, $7 for kids, and free for children under 5. 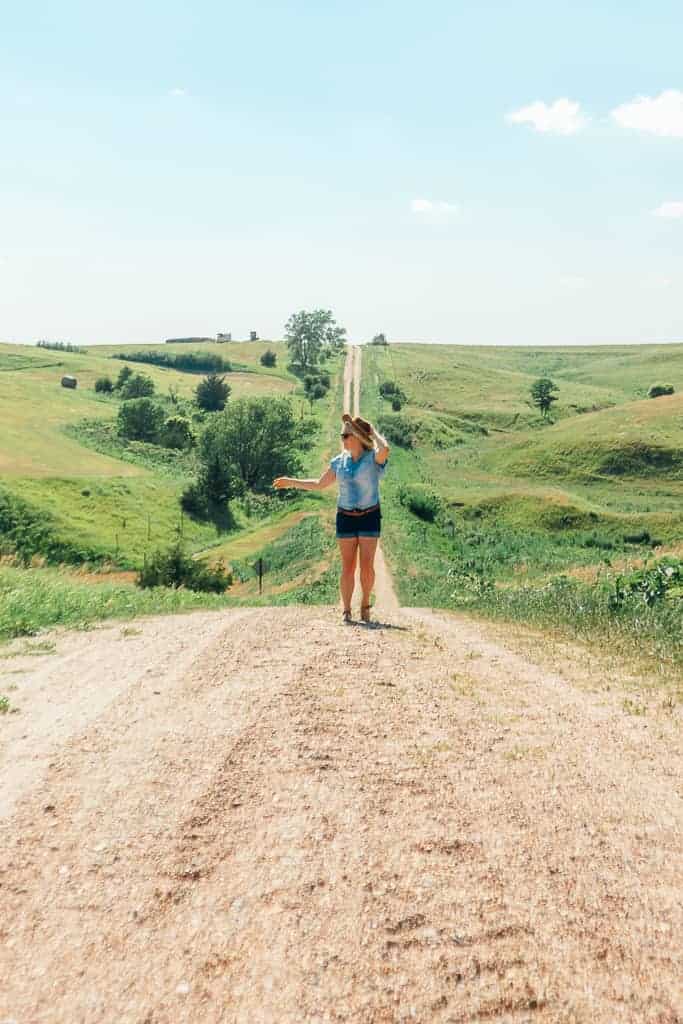 The Sandhills Journey Scenic Byway is known across the country for its open and limitless landscape, making it one of the most beautiful drives in the Midwest.  To begin your sandhills journey you’ll start in Broken Bow where you’ll drive west towards Alliance by Highway 2.  As you drive you’ll notice vast stretches of open land with cows grazing, tractors plowing by, and lush green hills that kiss the blue skies.  The Nebraska Sandhills is a mix of grassy prairies and dunes covering the north and west part of Nebraska. The dunes were created by strong winds during the last ice age. Grassland plants began taking root in the sand but not trees; eventually, the grass stabilized the dunes which is what we see today. While the soil is unsuitable for crops, ranching is popular in this area thanks to the invention of the American windmill and barbed wire.

6. Visit One of the Most Famous Rocks in America – Chimney Rock 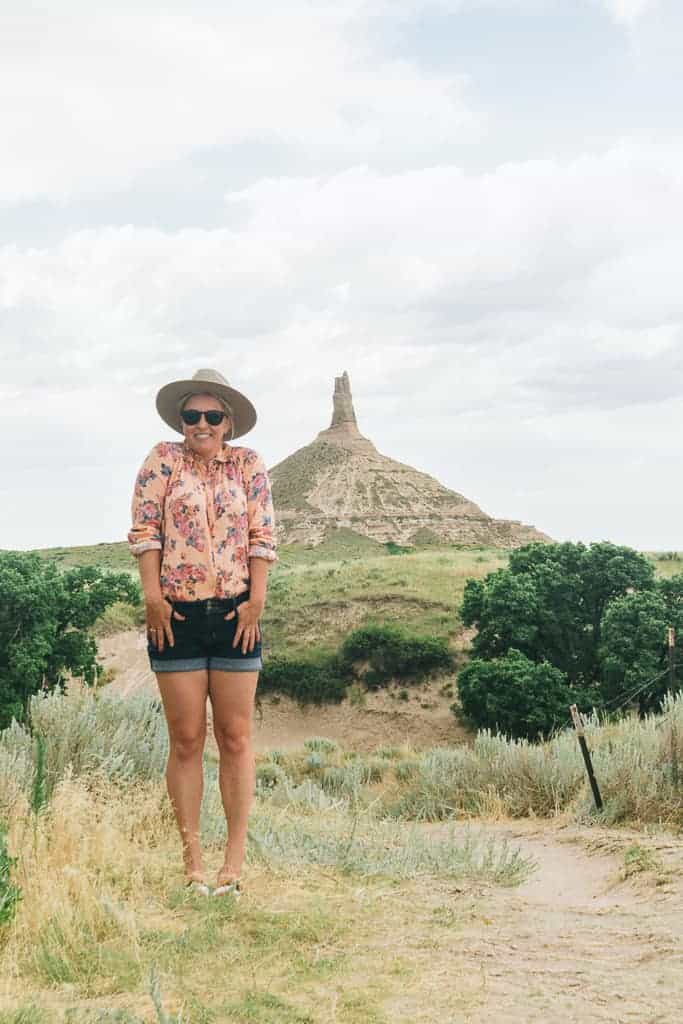 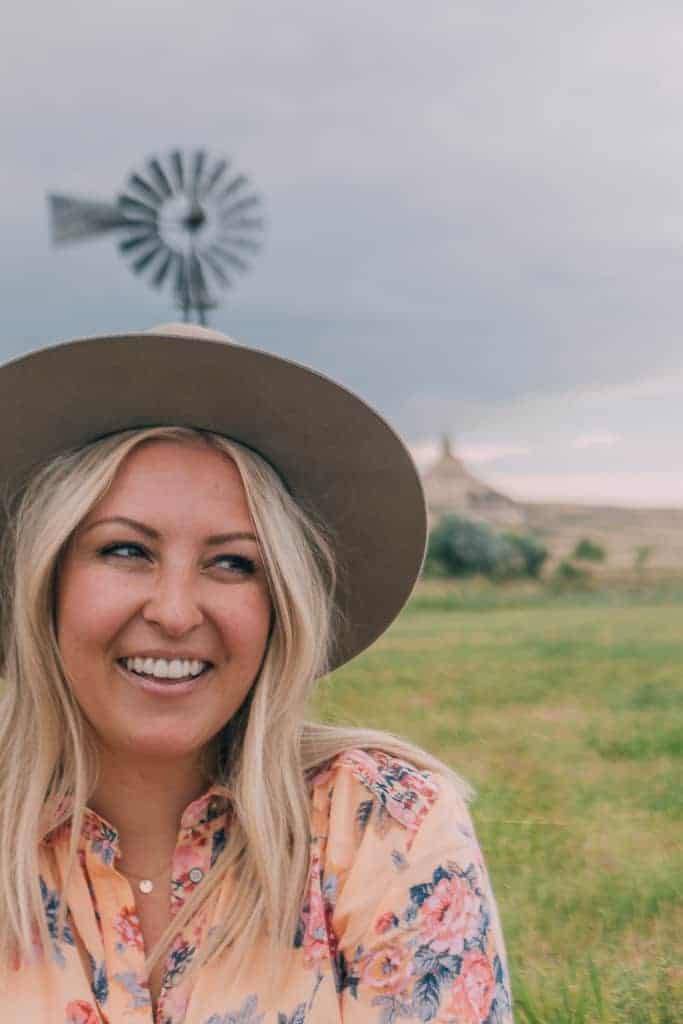 Chimney Rock is recognized as one of the main landmarks on the Oregon Trail guiding pioneers west.  It stands 4,228 feet above sea level but was thought to be even taller when first seen by settlers.  Unfortunately, the rock is shorter now due to lightning and erosion.  Chimney Rock is open year-round and you can drive up near it for free.  If you want to get even closer, there’s a small gate that you can enter on foot.  If you want to wake up at Chimney Rock you can also spend the night in a camper or rent the small cabin that sits on the property.  The cabin is available from May-September, does not have WiFi or a toilet, but has an incredible view facing Chimney Rock.

7. Take a Stroll Through a Fake Town 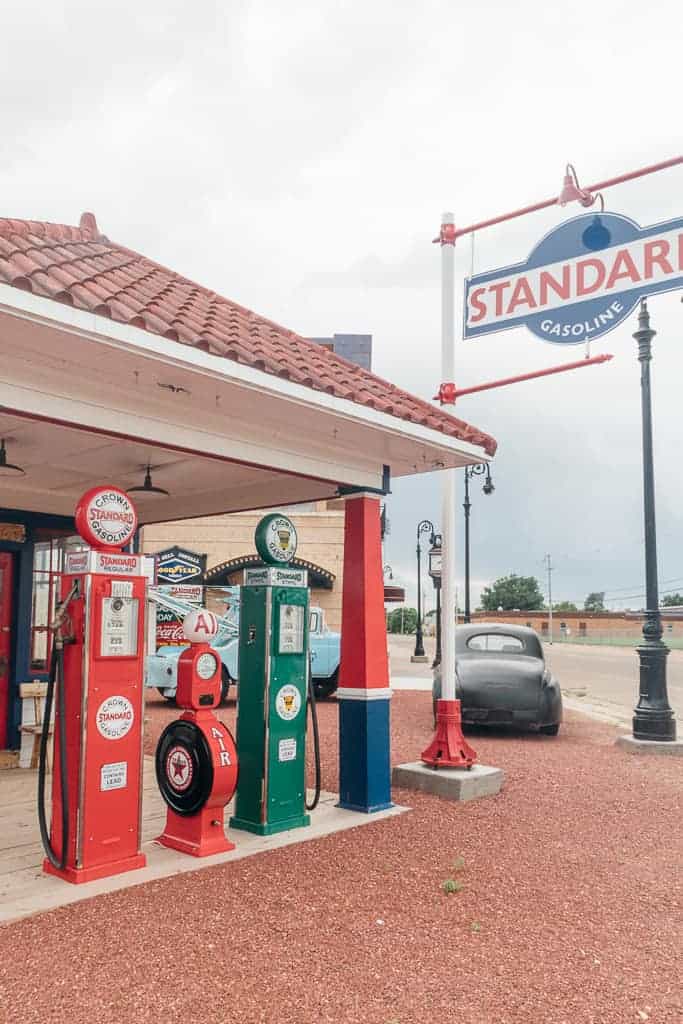 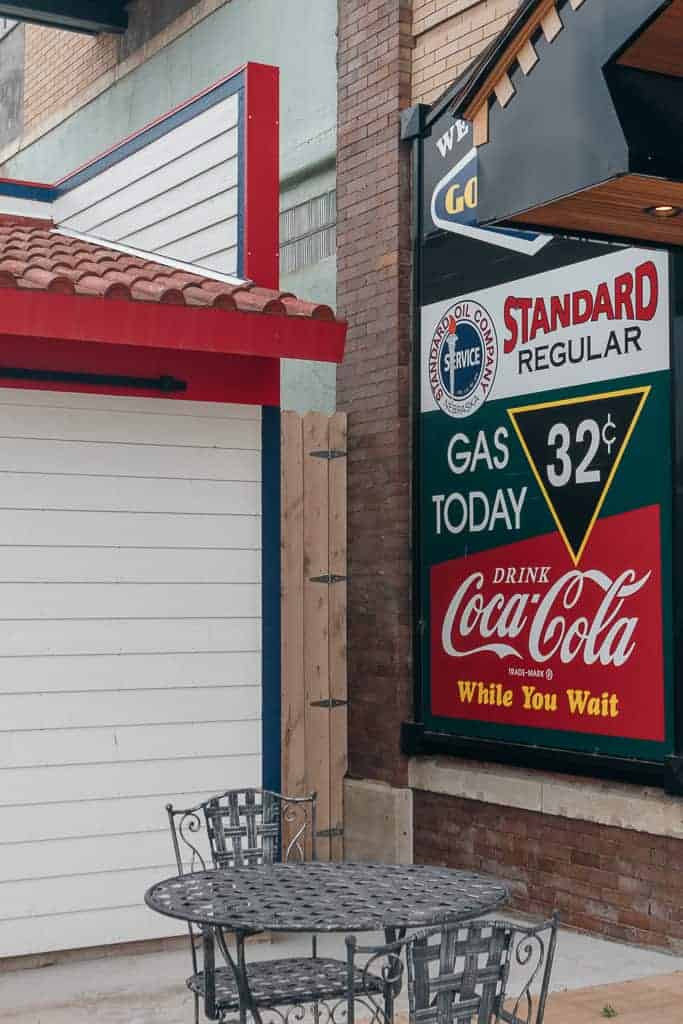 By far one of the most bizarre attractions in Nebraska seems to be one that nobody really knows about.  A man named Tom created an entirely fake town in Gering, Nebraska off of 7th and S.  Here you can stroll by shops, a gas station, and more.  But please be respectful, Tom asks that you call and ask permission to be shown around the property; his phone number can be found on signs near the gas station. 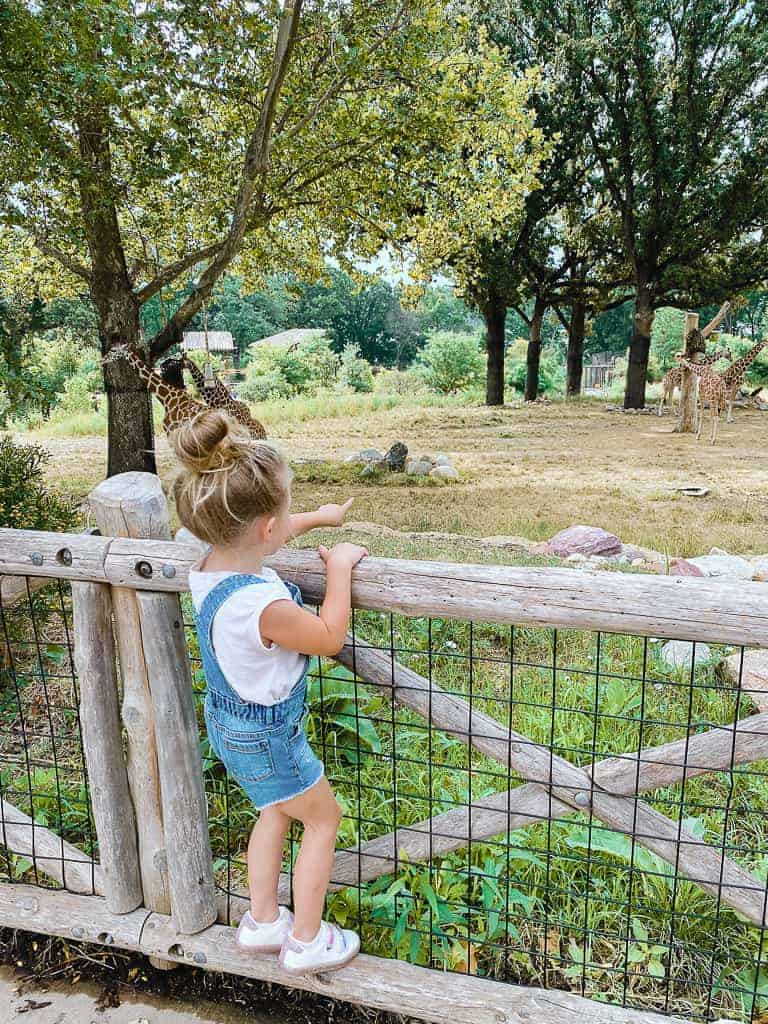 The Omaha Henry Doorly Zoo is one of the biggest, most expansive zoos in the world.  It opened in 1895 with only 3 animals – a bear, mouse, and a fish – and has now grown into over 15+ exhibits containing 962 different animal species.  It’s unique because it has been built to reflect the habitats of animals.  For example, there’s a desert dome (the biggest indoor desert in the world), emulating 3 different desert habitats; the Namib Desert, the Red Center of Australia, and the Sonoran Desert.  There’s also an aquarium, jungle, butterfly exhibit, and more.  While the zoo draws families from all over, there are designated adult-only times if you’re looking to avoid the crowds of children.  For complete information on what’s going on in the zoo and the price of entry, make sure to check out their website.

9. Cheer on the Cornhuskers Football Team

When:  September-November (dates vary each year) 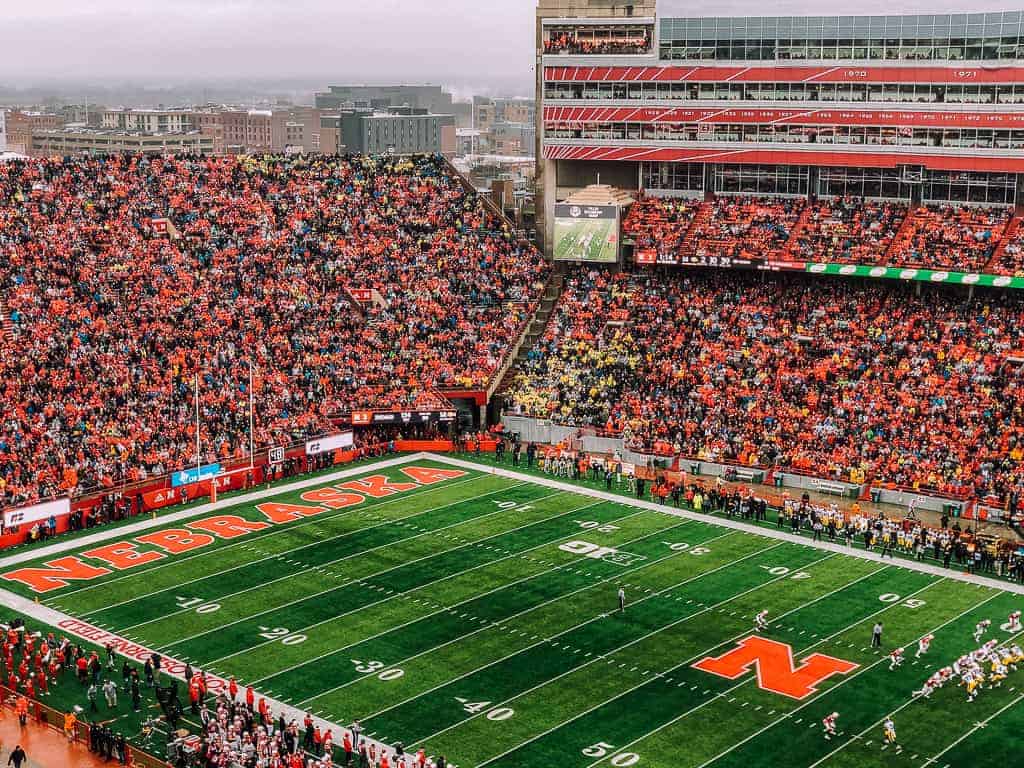 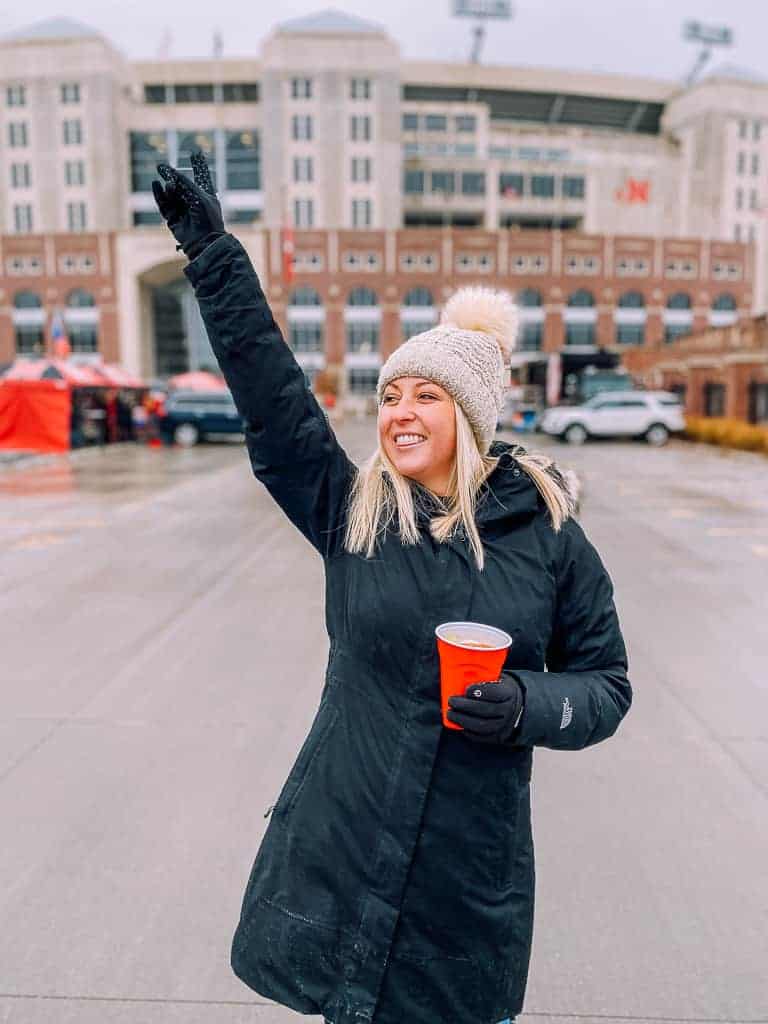 With no professional sporting teams in Nebraska, the Cornhuskers get all of the love from Nebraska natives.  In fact, the Nebraska Cornhuskers hold the longest sell-out streak in the nation, with 90,000 available seats.  Although the Husker aren’t notoriously known for being good, the atmosphere of the games is unbeatable.  Make sure to come early or stay late to see Lincoln transform into a sea of red and cheer the Huskers to victory!

When:  June (dates vary each year) 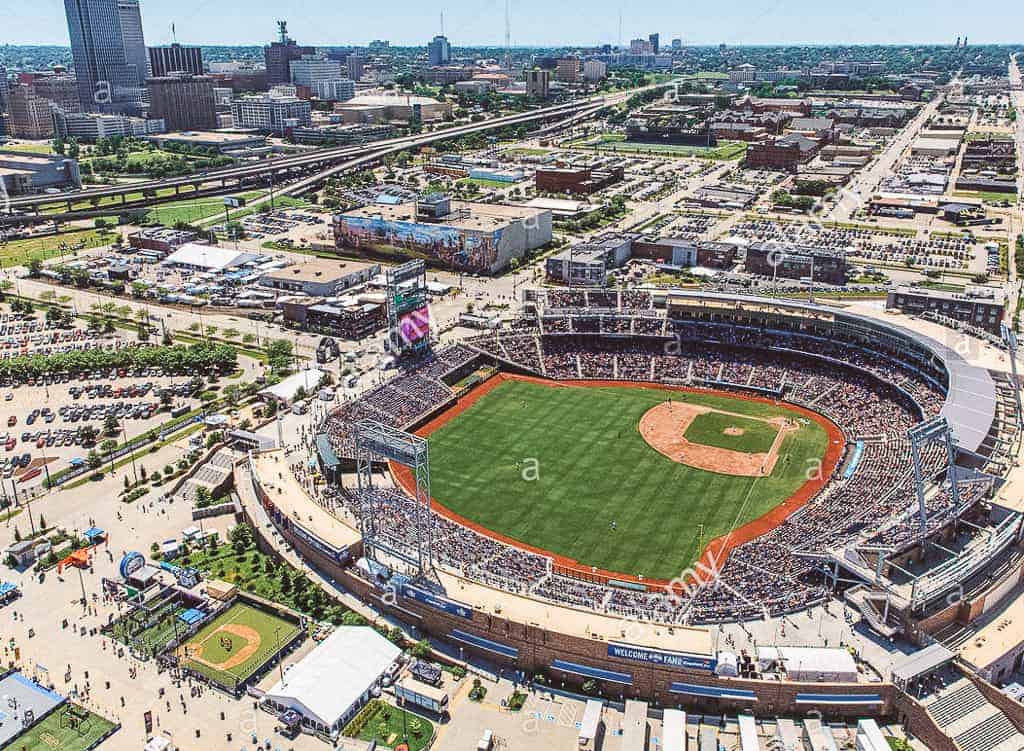 Stock photo – was taken from Alamy

Each summer, for 2-weeks, Omaha gets bombarded by baseball fans coming to watch the annual College World Series played at TD Ameritrade Park in downtown Omaha.  In fact, the CWS itself brings in the most visitors to Nebraska than any other time of the year.  Because you can’t find this tournament anywhere else, I highly recommend booking a trip to Omaha to experience it for yourself.  If you like tailgating, grilling, a friendly rivalry, and a fun atmosphere, you’ll definitely want to be in Omaha during part of the series.  The city completely transforms into a fun and lively town, packed with people tailgating, crowding the bars downtown, and filling up the hotels.  The CWS is one of the most unique sporting events I’ve been to and full-heartedly believe that everyone should come to try it out at some point.

So, I get it.  Nebraska isn’t for everyone.  And it might not even be for you.  But before you brush it off like an annoying fly landing on your food, come give it a shot.  These unique and quirky Nebraska attractions aren’t going anywhere, but I still encourage you to come before more people get in on the secret – Nebraska’s pretty great after all.

If you’re looking for more information on Nebraska, make sure to check out these posts:

From Omaha:  A 2-Day Road Trip to Western Nebraska

10 Reasons You Should Want to Visit Omaha, Nebraska

For more Nebraska inspiration make sure to check out my Instagram page/highlight reel by searching #ppinnebraska or finding “Nebraska” or “Omaha, NE” in my highlights. 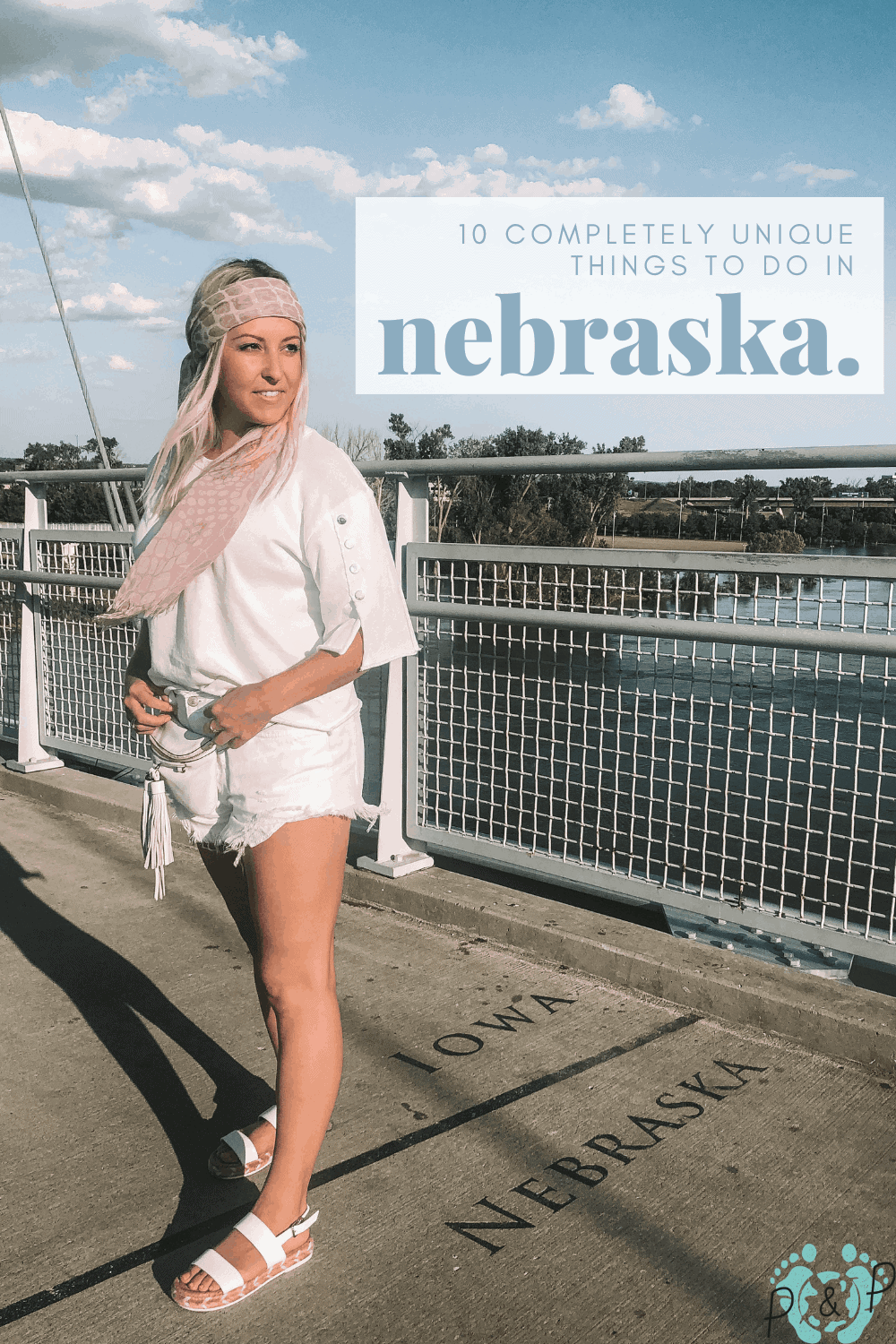 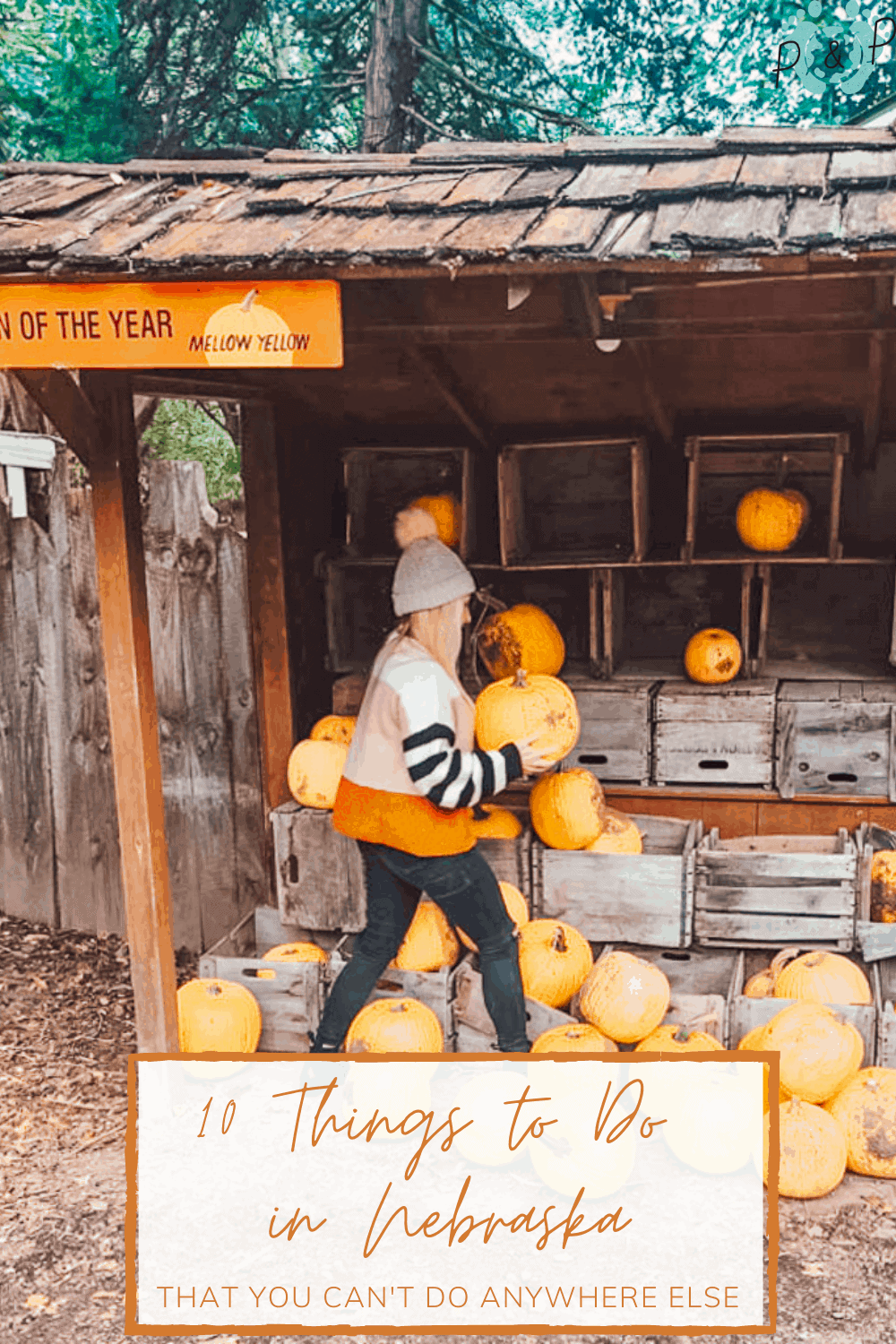