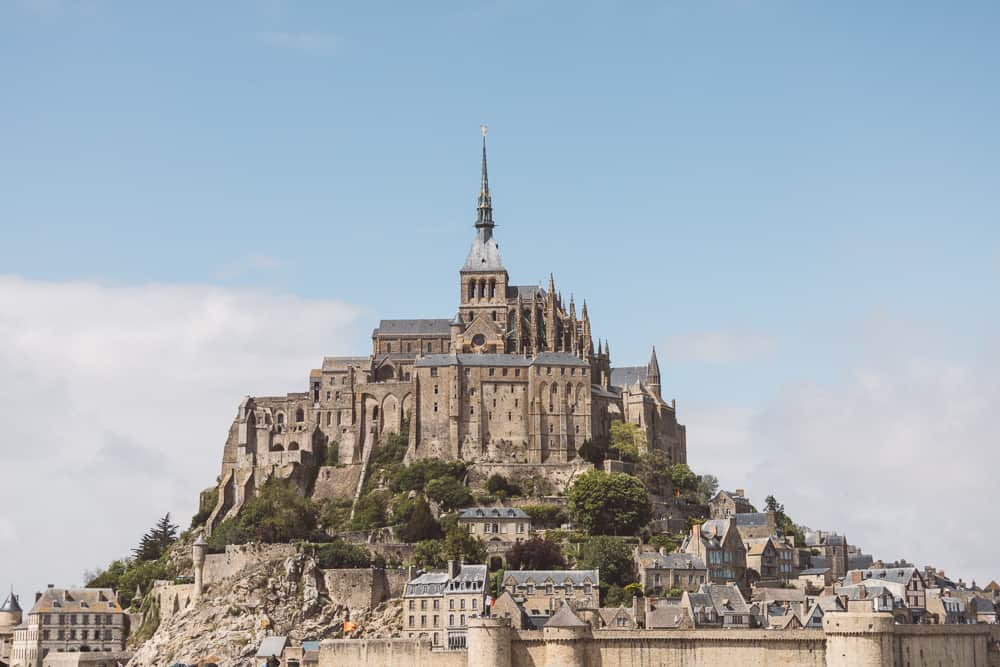 A town on the west coast of France, where the Atlantic meets the coastline, sits the dreamy, mysterious island of Mont Saint-Michel.  Chances are you’ve seen it splashed all over social media, as the island is quite intriguing with a huge abbey having been built on sheer cliff side in 1523.  This magical island is located in France’s Normandy region, four hours west of Paris; and it’s the perfect weekend trip from Paris as it’s much quieter, smaller, and can easily be explored in a day or two.

While this region in Normandy is quite popular for tourists who pop in for the day to tour the abbey, staying for a weekend and exploring off of the island is well worth it.  A chance to get away from the crowds, visit with the locals, and see the French countryside.  If you’re looking for a beach retreat, fun in the sun, or a party vibe – then Mont Saint-Michel isn’t for you.  Instead it’s for those who are looking for a quieter retreat, who don’t mind misty, cloudy mornings, and are content with a book in hand or a good board game after the sunsets and the restaurants close their doors.

Officially, Mont Saint-Michel is a “tidal island” meaning there’s a piece of land connected to the mainland by a causeway.

From Paris:  A Weekend Trip to Mont Saint-Michel 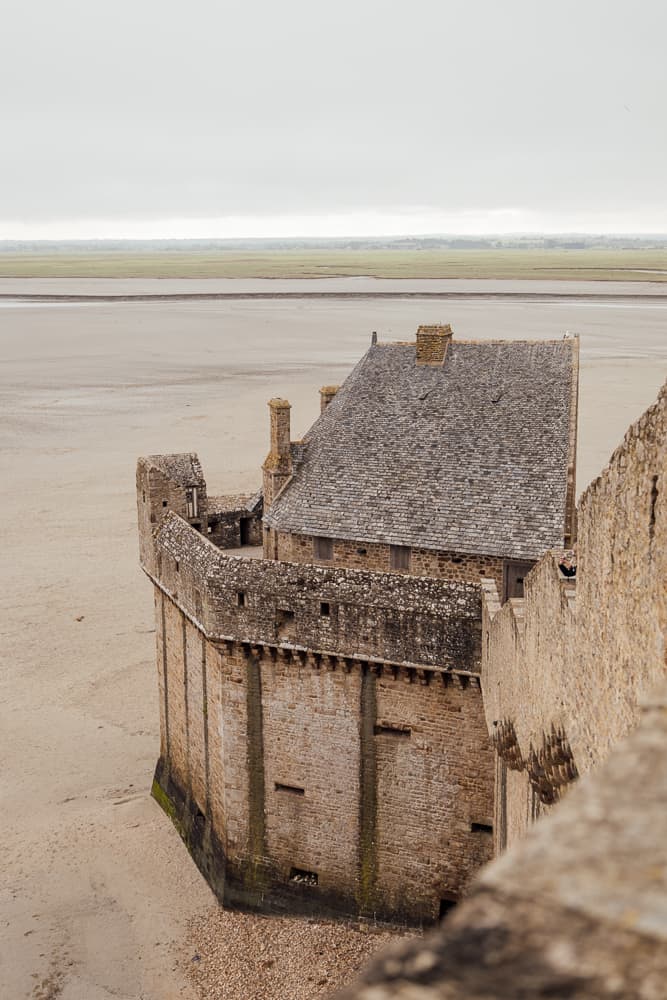 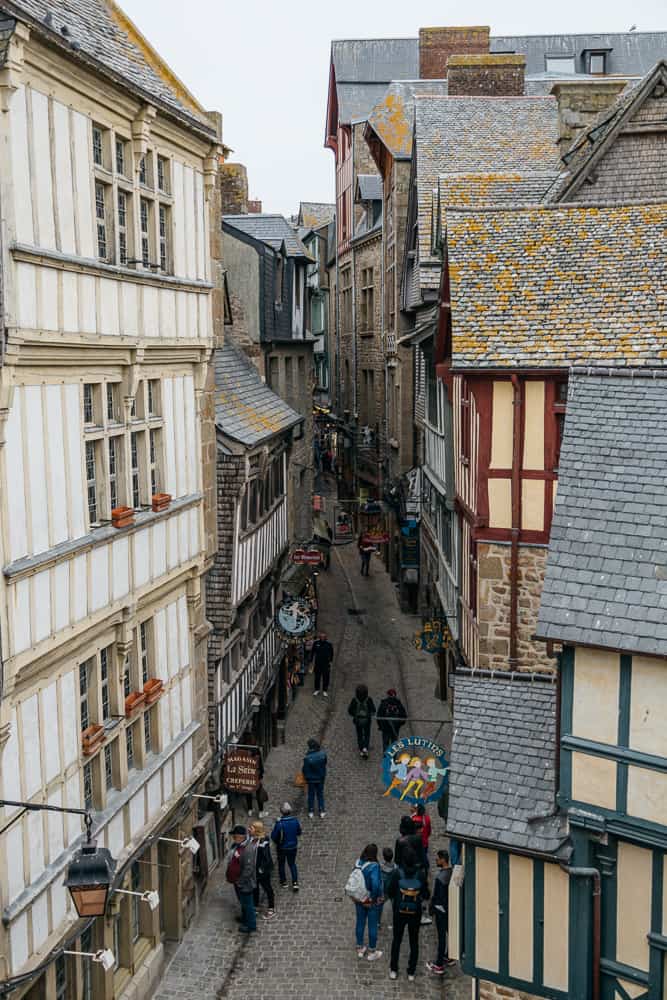 When to Visit Mont Saint-Michel 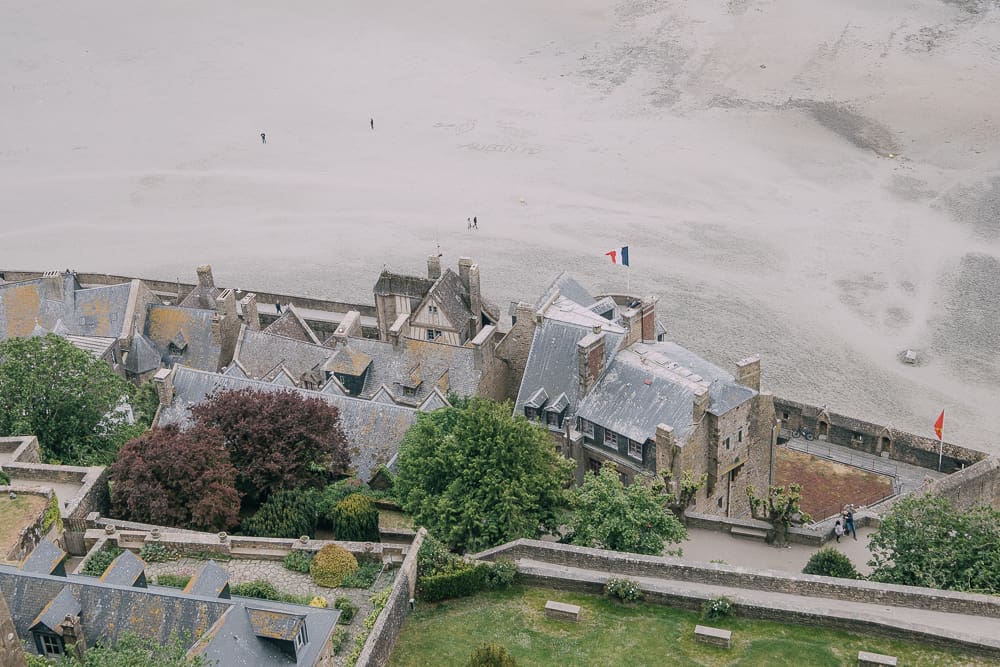 Temperatures in Mont Saint-Michel are pretty temperate, ranging from 40-70 F.  The warmest months are June-September, and the coldest months December-February.  The island tends to get pretty quiet in the winter, so although you’ll be fighting other tourists, I recommend visiting in the summer months.  But even then, I recommend bringing a light jacket for those cool, overcast days.

How to Get to Mont Saint-Michel from Paris 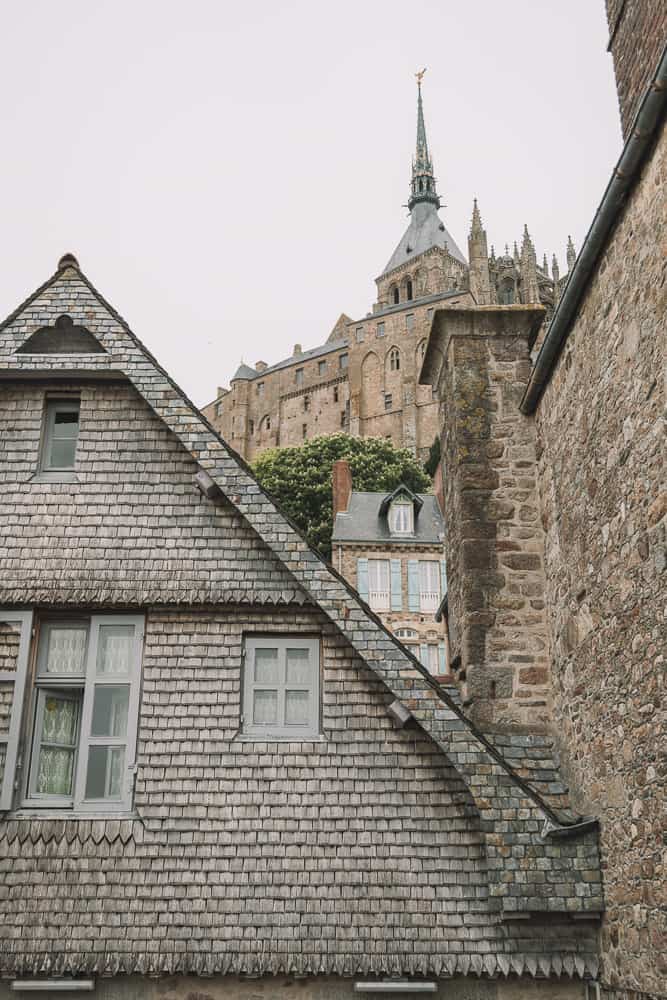 Taking a car to Mont Saint-Michel is a good idea if you’re looking to further explore the Normandy region.  It’s also a bit less fuss than the train because you can go at your own pace and not only is the drive beautiful, but it’s quick clocking in at only four hours.  However, if you’re staying on the island, parking may be difficult to come by so make sure to check in with your hotel what the parking options are before you arrive.  (If you’re planning on just exploring the immediate area of Mont Saint-Michel, you certainly don’t need a car to get around as everything is pretty walkable).

If you’re renting a car, make sure to compare prices on several different sites to get the best deal.  I tend to gravitate towards Kayak to compare prices, and book directly from the rental company.

Train travel in France is a beautiful thing!  The trains are clean, well-kept, spacious,  and French people tend to keep to themselves making the overall experience quite peaceful.  While there are still some things I have yet to figure out about train travel in France (I always have trouble finding my assigned seat), overall I’d highly recommend taking the train from Paris to Mont Saint-Michel.

Unfortunately, there isn’t a direct train from Paris to Mont Saint-Michele, but the journey is still quite fast at 4-6 hours depending on your route and number of stops (don’t be surprised if you have to change trains along the way).  To get the best ticket price, I suggest comparing different websites, although I seem to continuously gravitate towards RailEurope.  When searching for a ticket your departure should be “Paris (any location)” and your arrival should be “Mont St Michel”.

Where to Stay in Mont Saint-Michel 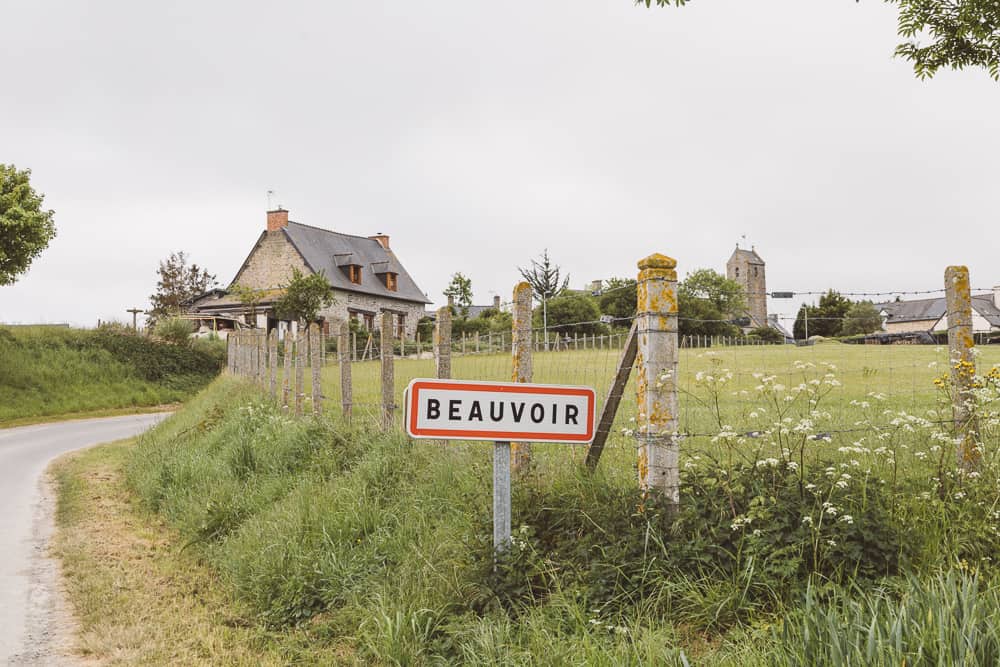 There are hotels on the island of Mont Saint-Michel, but if you’re looking for a more affordable option and a more “local” option with less tourists,  I recommend staying off the island in a smaller town nearby.

When I visited Mont Saint-Michel, I stayed in the town of Beauvoir at a simple (but dreamy) bed and breakfast inside an old converted farmhouse, which can be found on Airbnb.  This option was more off-the-beaten-path, less touristy, affordable, and still walking distance to Mont Saint-Michel.  It’s the perfect choice if you’re looking for a quiet getaway.

*The following itinerary is for those who have decided to stay off the island in Beauvoir, versus staying on Mont Saint-Michel island* 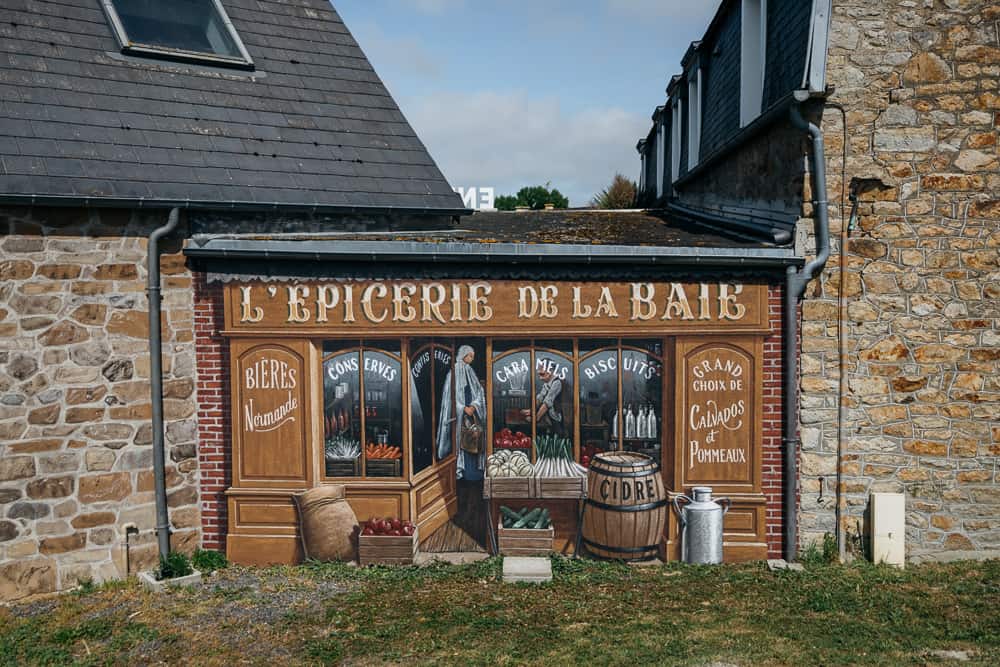 By the time you arrive to Mont Saint-Michel and check into your hotel, it’ll be afternoon/early evening.  I suggest grabbing lunch and renting bikes to explore the area.

If you’re staying in Beauvoir (recommended above), head to L’Epicerie de la Baie to grab some picnic supplies, wine, and head outside to enjoy your meal on one of the tables or park benches.  If you’re craving dessert, you definitely have to try the famous dessert of the region – crêpes.  You can find tasty crêpes at La Restaurant de la Galette.

If you want to see the beautiful countryside, I recommended doing so on bike, which you can rent from BIK’INBAIE for the day or the weekend.  For a simple dinner, head to La Bisqu’in for fresh seafood.

Day 2:  Exploring On and Off Island 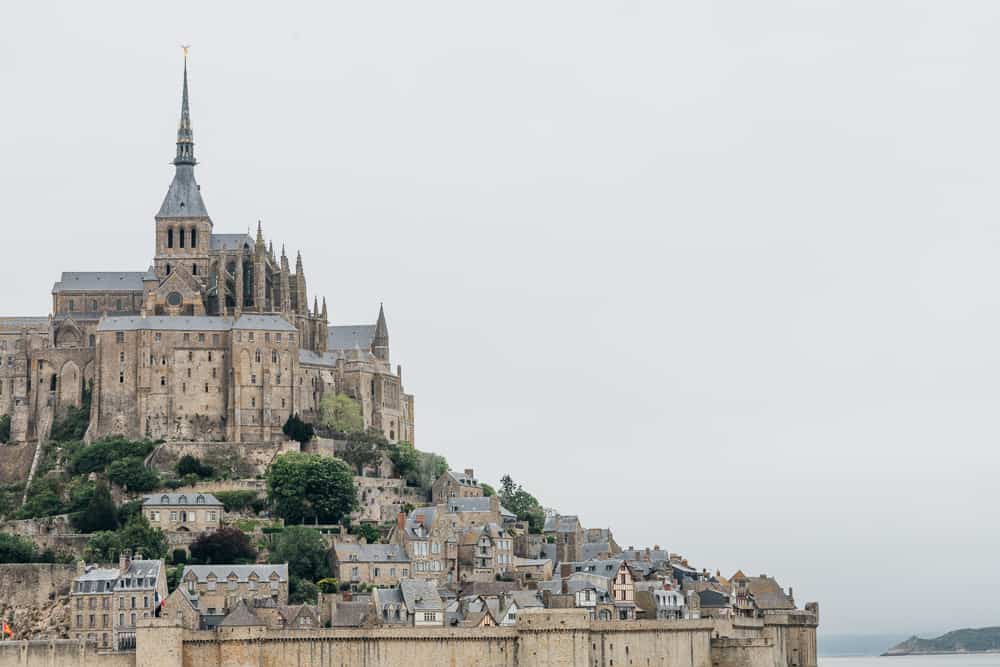 Start your day off bright and early by heading to Mont Saint-Michel first thing in the morning.  I highly recommend arriving by 9 am at the latest (that’s when the abbey opens), as later in the day the crowds show up and it’s nearly impossible to walk through the narrow streets.

Once you arrive to the island, purchase tickets to visit Abbaye du Mont-Saint-Michel (I also recommend getting the audioguide for an extra €3), the main attraction in Mount Saint-Michel.  The building of the abbey began in 708, and it took 1,300 years to complete due to its ornate structure and being built on inhospitable land such as rock and granite.  When you walk through the abbey not only will you be impressed with its size, but of the detail that went into creating such a magnificent place of worship on such an interesting landscape.  It’s truly a wonder!

After you finish your tour of the abbey, head to lunch in town.  I suggest eating at Les Terraces de la Baie or La Mère Poulard – a restaurant famous for a puff omelet that has been a secret recipe for 130 years.

Before leaving the island, walk outside, around the town walls, so that you can see how impressive Mont Saint-Michel is from all sides.  If you want to venture further away from the island and walk in the sand, you can hire a guide to walk with you.  Hiring a guide is absolutely necessary because there is quick sand around the island and it isn’t advised that you wander around alone.

Day 3:  Traveling Back to Paris 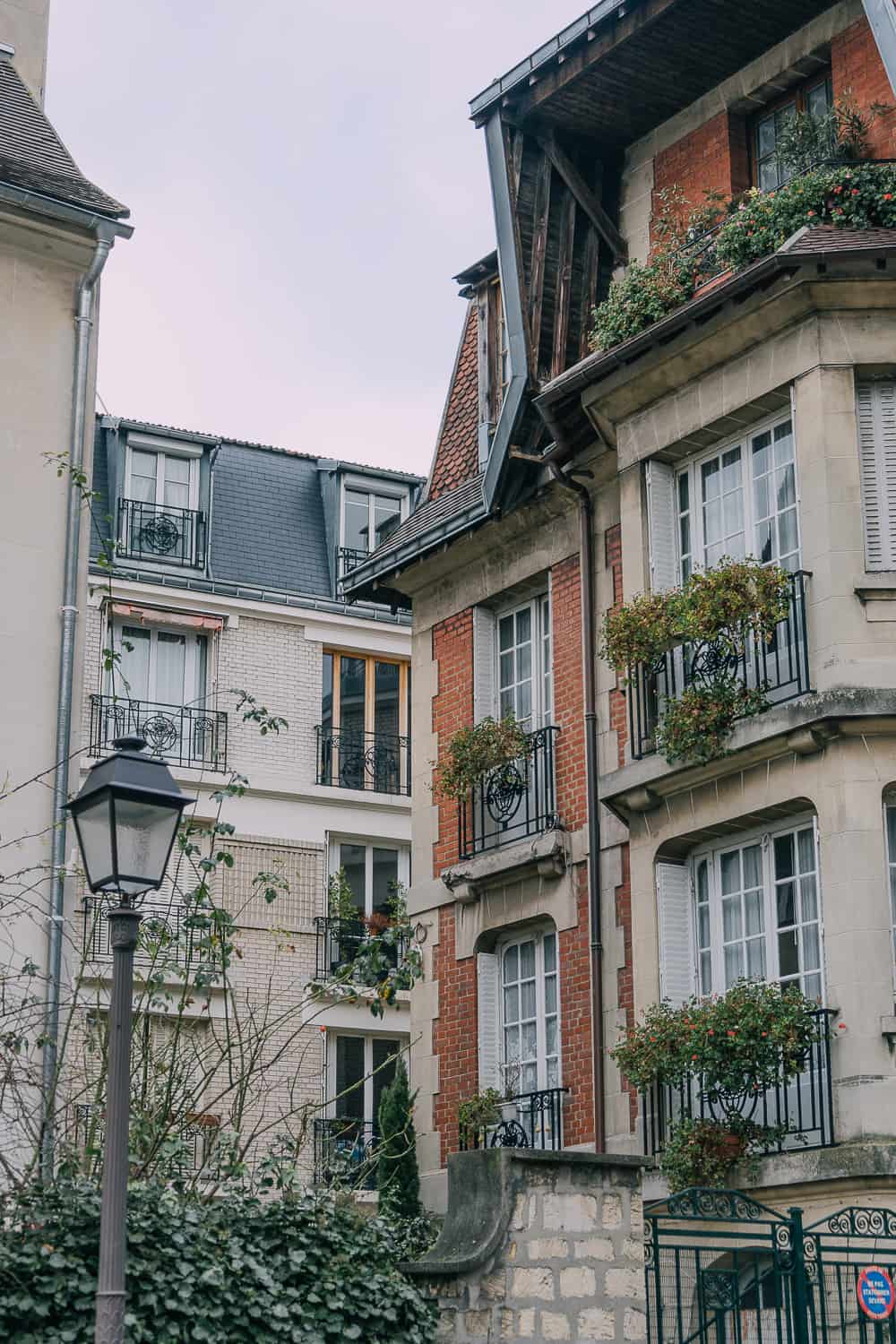 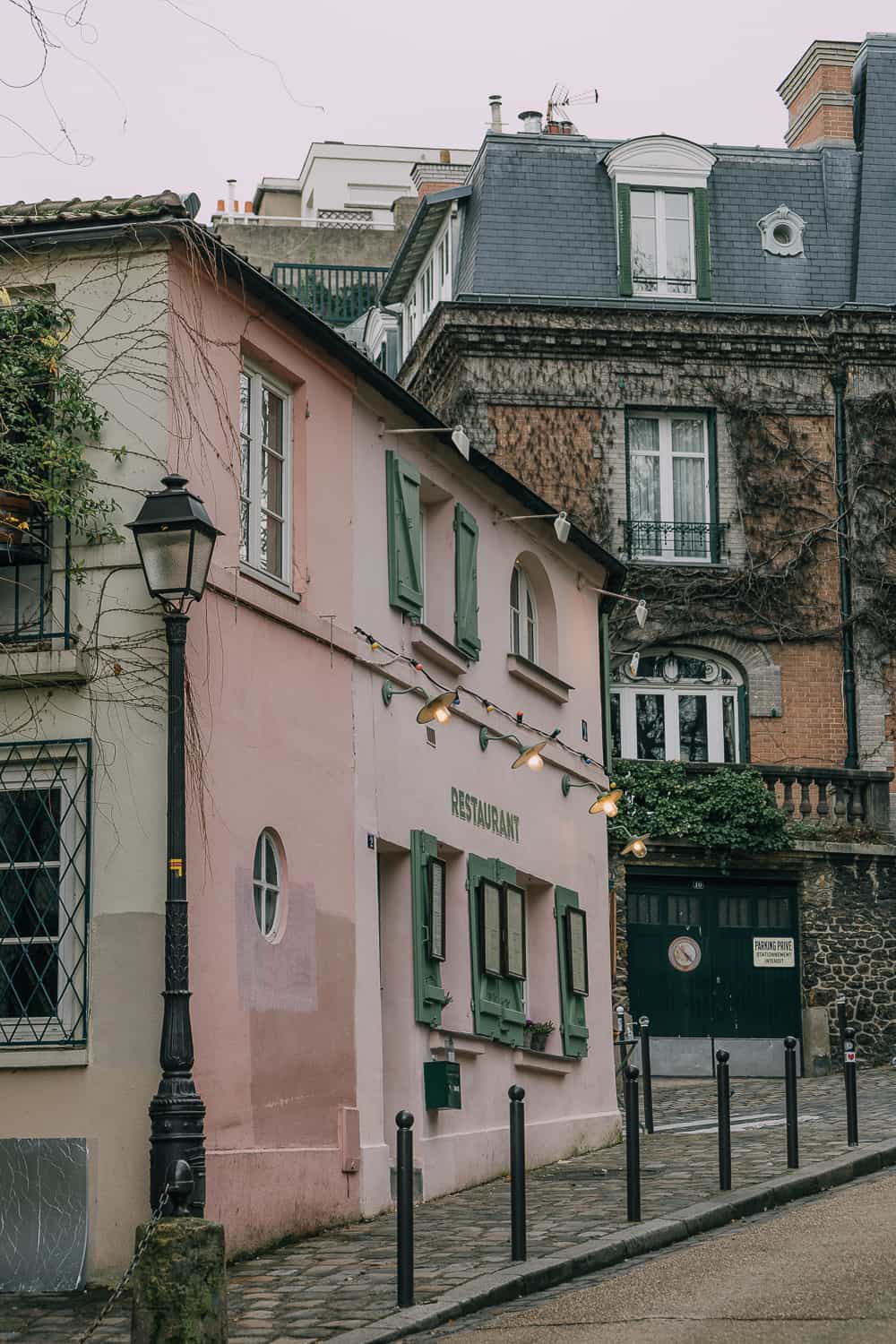 On your final day in Normandy, wake up early to walk through the French countryside before heading back to Paris.  While this area in Normandy is quiet, I hope that you got a taste for the uniqueness of Mont Saint-Michel, and appreciated the slow pace at which the town operates.

If you’re looking for other trips to take from Paris, don’t miss – From Paris:  A Day Trip to Versailles 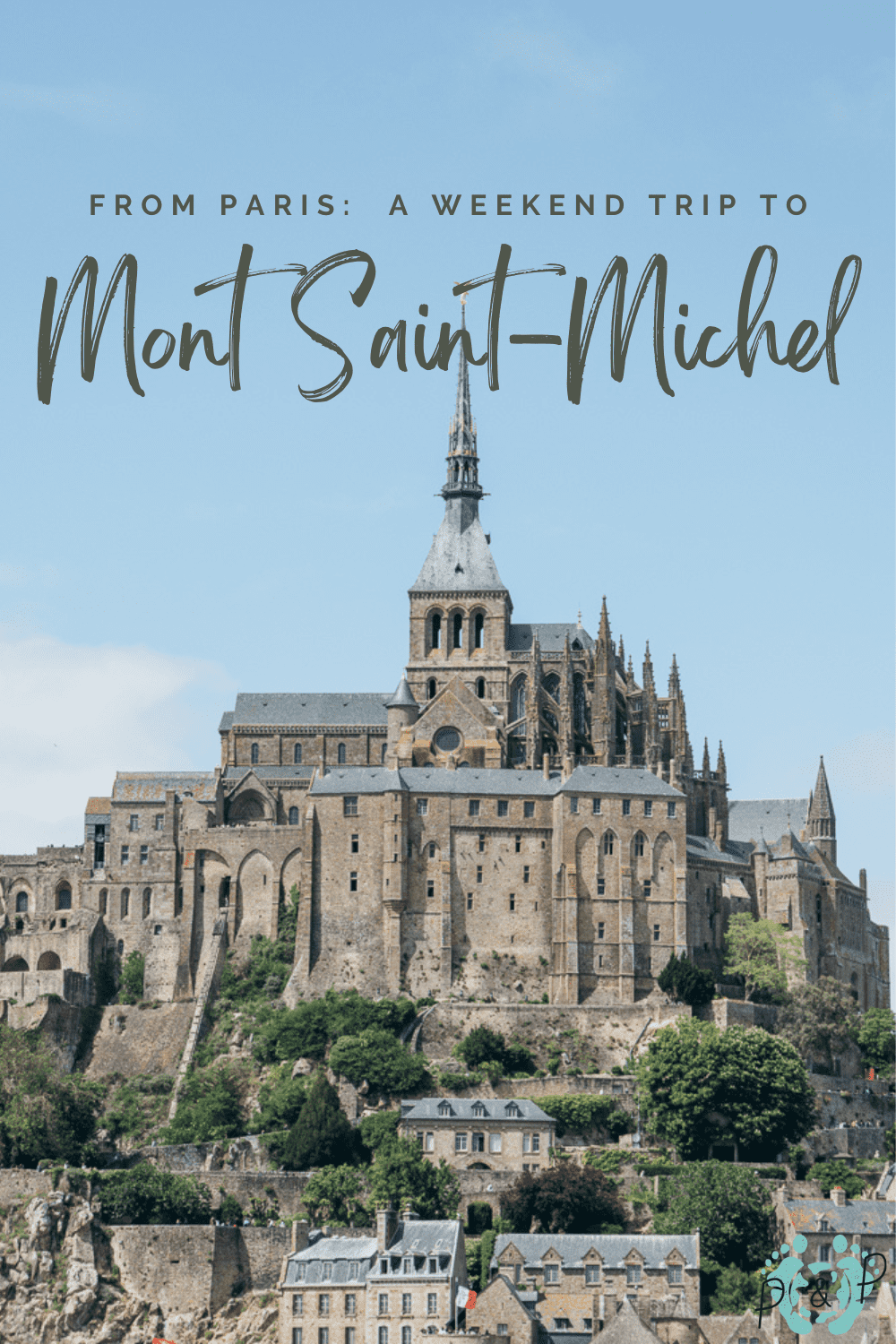 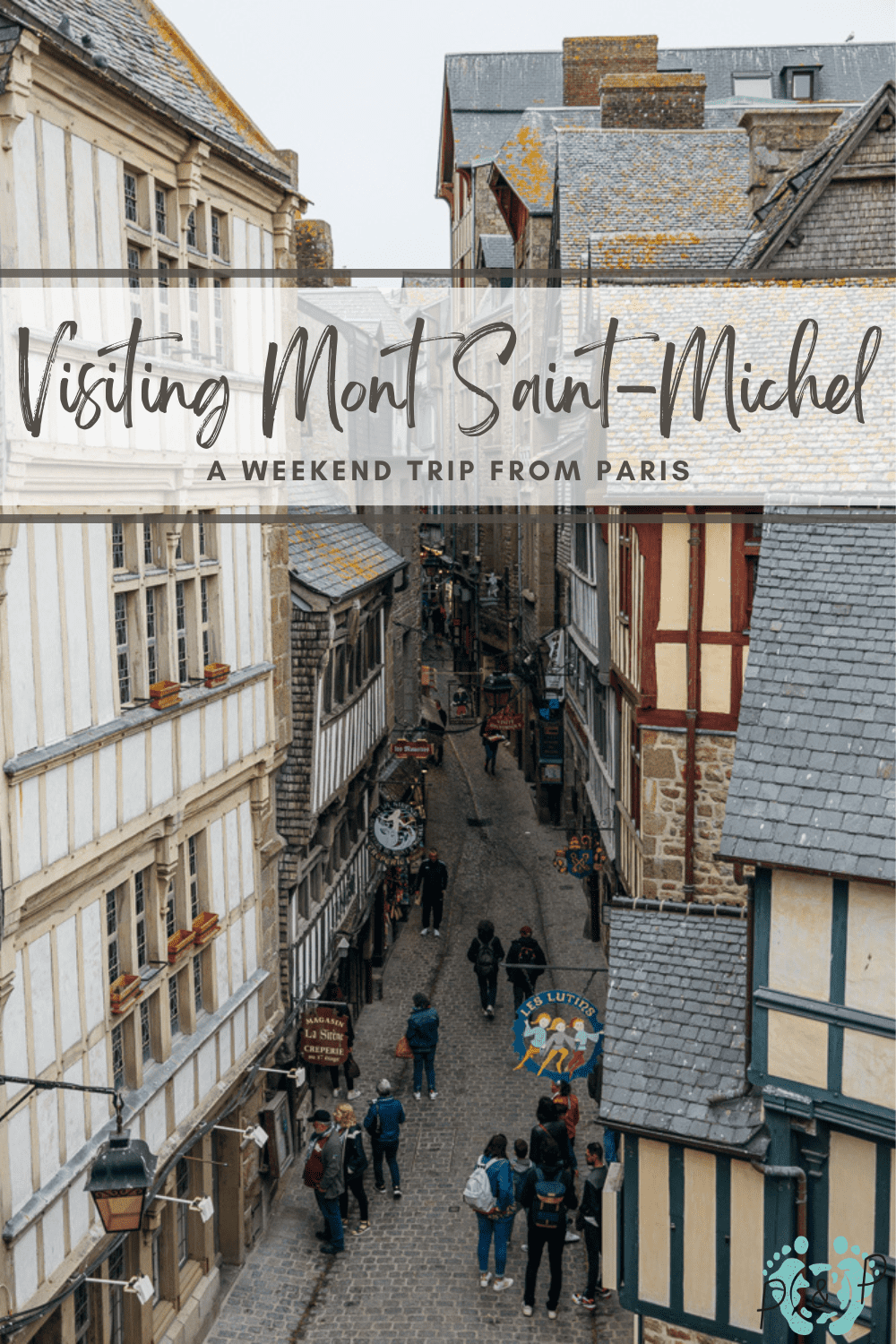