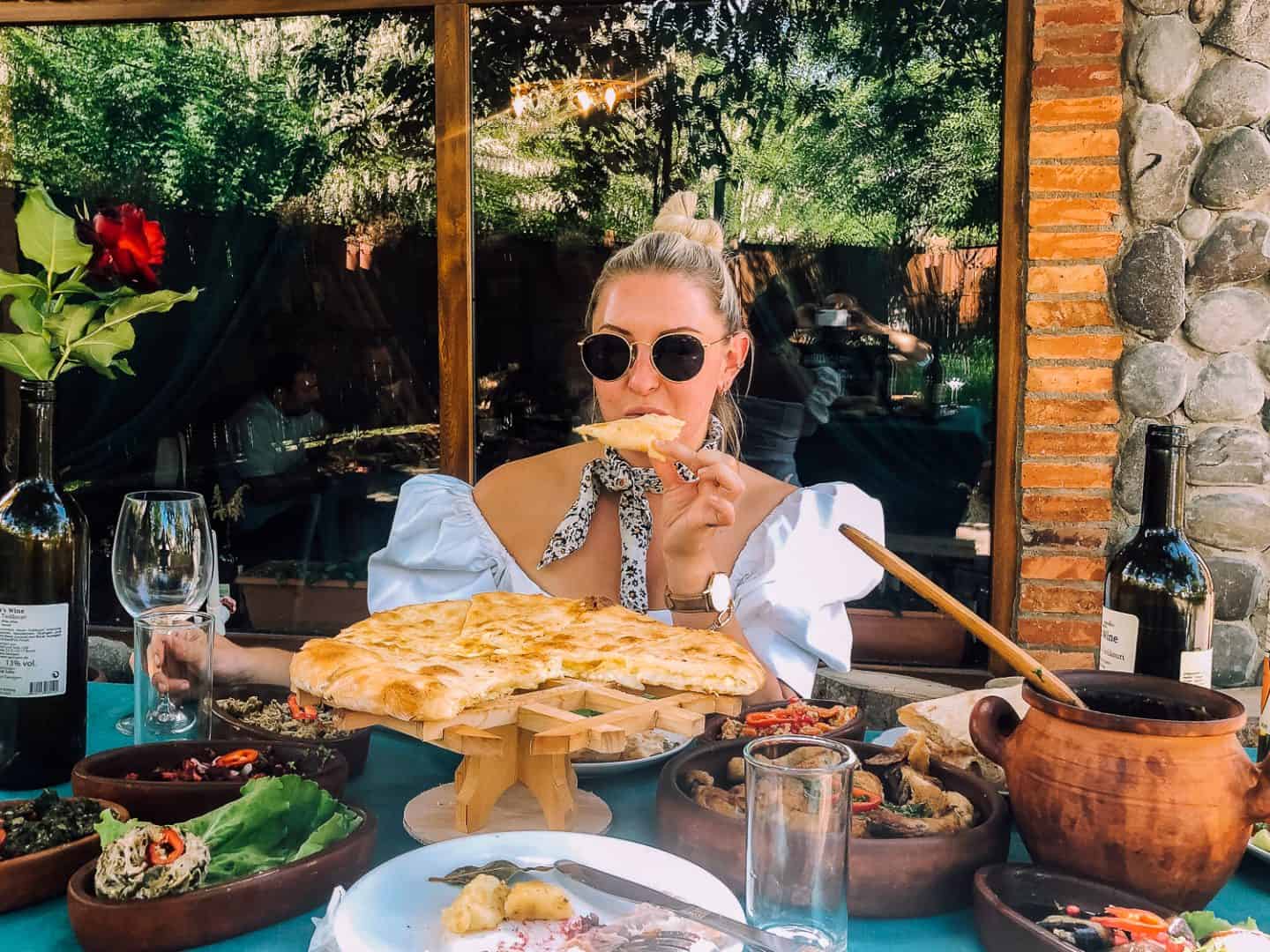 One of the best things about traveling is diving into a different culture.  And what better way to get to know people from through their food?  Now, before going any further, I just have to say – the food in Georgia is the BEST.  Georgian foods are typically carb, cheese, and butter heavy.  The portions are huge, and most importantly the food is made with such love and passion for the Georgian culture.

20 Georgian Foods You Have to Try When You Visit Georgia 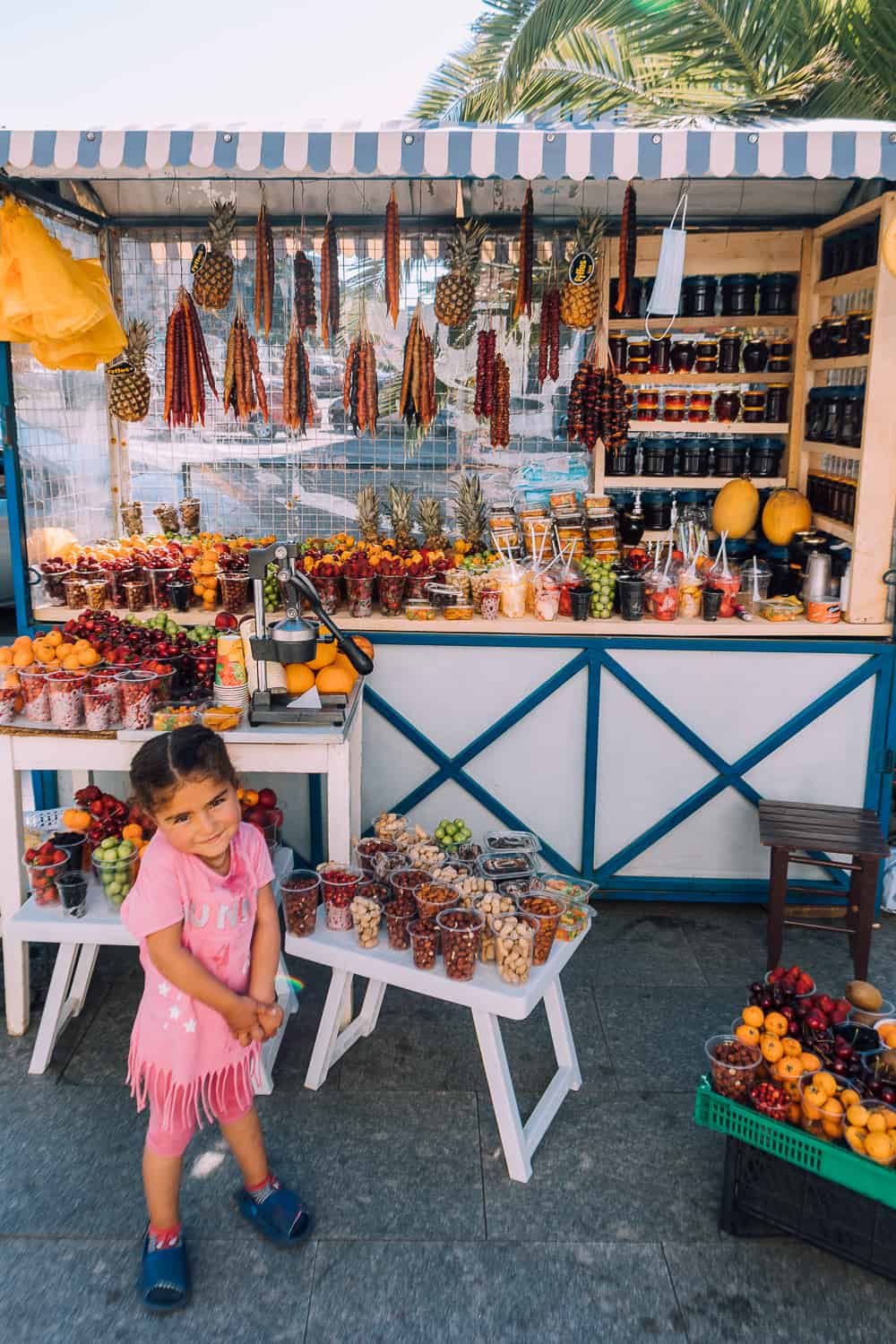 There are so many unique flavors and dishes throughout Georgia.  As you move from region to region you’ll even discover that each place has its special dish and spin on traditional Georgian food.  Below are the most common foods to find throughout the country and even tips on where to find them! 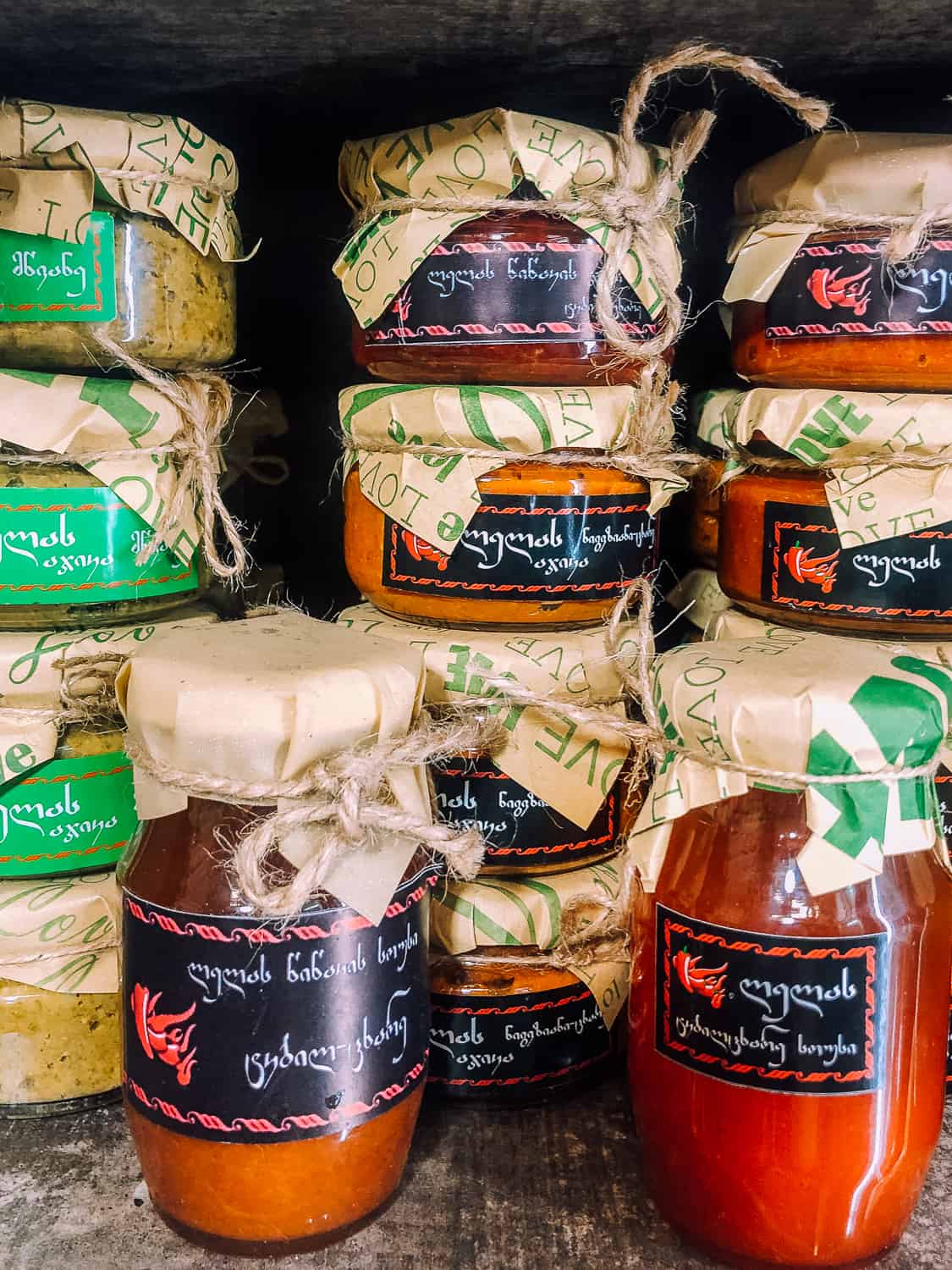 Adjika is a unique dip in Georgia, and while it has a kick to it, it’s very subtle.  Ajika is added to a variety of different types of Georgian cuisine, including flavoring meat and fish dishes, and can be a spice mix or a dip.  The dip is typically red, although it can sometimes be green, and resembles pesto in looks – not taste. 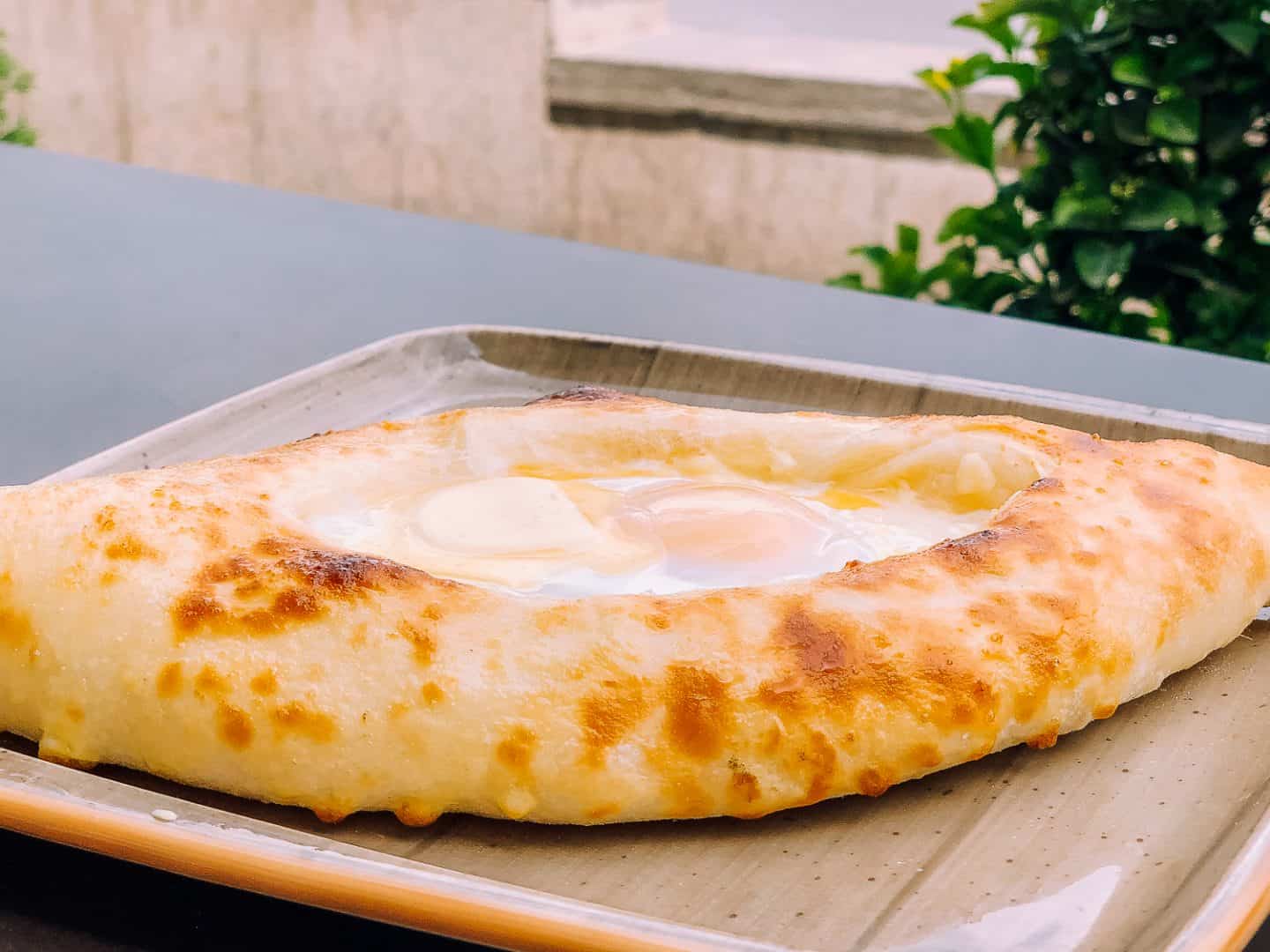 Ajarian khachapuri is different than the traditional khachapuri in that it has an ooey-gooey egg atop a sea of bread, cheese, and butter.  This dish can be found all over Georgia but is the local dish in the Adjara region of Western Georgia. 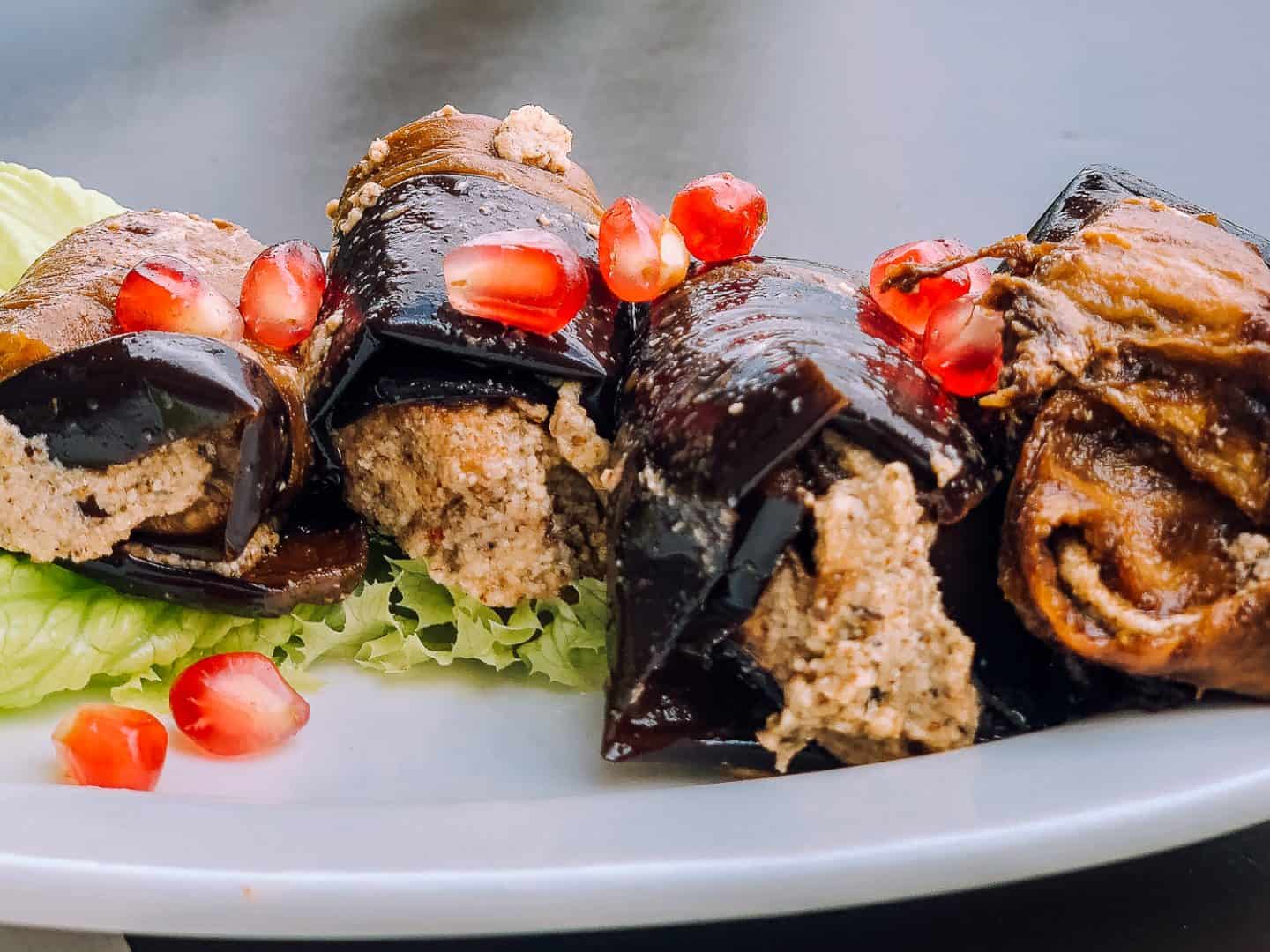 When I first tried Bahza I was completely blown away.  It wasn’t what I was expecting but it was SO delicious.  Bahza is a walnut sauce that is served in many different ways, but I prefer it with eggplant, carrots, or on top of other veggies.  The sauce is creamy and thick (although can be thinned) and overall an unexpected treat.  (Pictured:  bahza is the sauce stuffed in the eggplant).

Where to eat bahza:  Toma’s Wine Cellar in Kutaisi (note:  this is a family restaurant so dishes change seasonally); or Okro’s Natural Wine in Sighnaghi 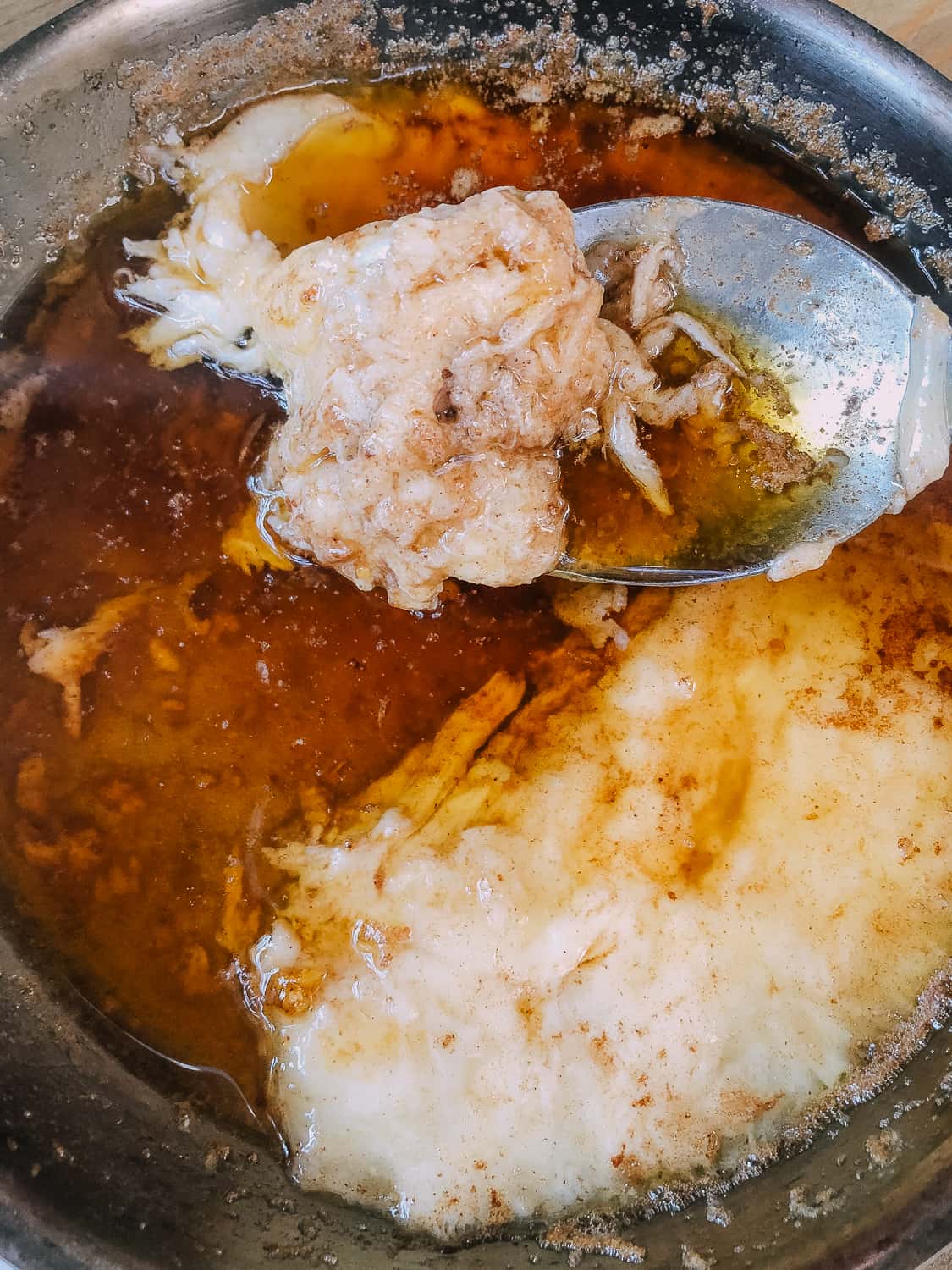 Burano is absolutely sinful.  It’s one of the most delicious things that I ate in Georgia, but you can’t eat much of it.  It’s a rich dish made up of melty cheese and butter that you dip bread in.  It kind of reminds me of a cheesy fondue, but heavy on the butter.  Burano is traditional to the Adjara region of Western Georgia.

Where to eat burano:  BatuMarani in Batumi

Chakapuli is a stew-like dish common throughout the country.  It’s made up of a type of meat (lamb, veal, beef), onions, chopped greens, and tons of spices giving it a lot of different flavor profiles.  When you order chakapuli make sure to order bread to go with it to get all of that delicious liquid soaked up! 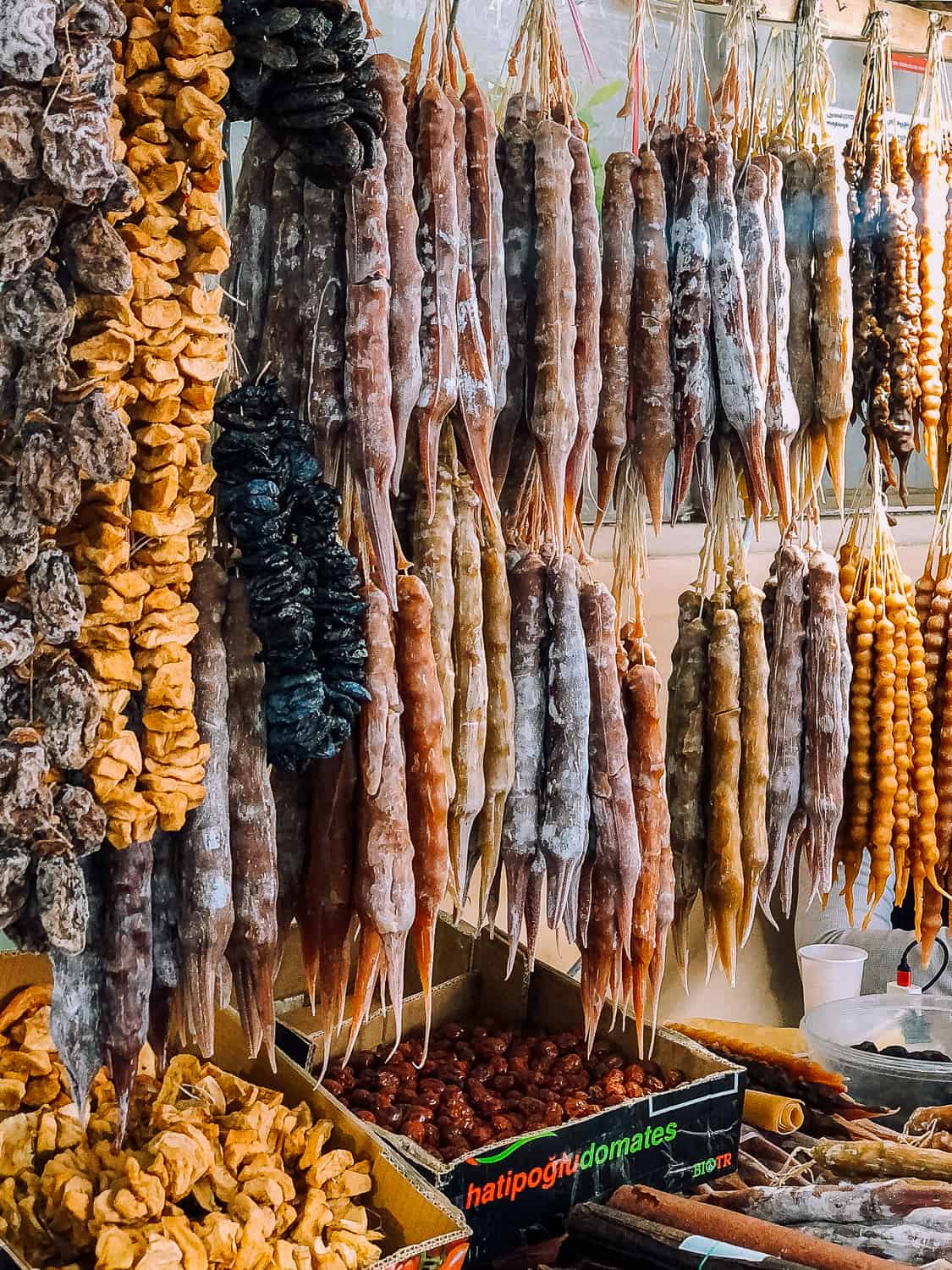 Oftentimes referred to as the “Georgian Snickers”, don’t be fooled by this.  Churchkhela is a common “dessert-like” item sold all over the streets in Georgia.  It’s shaped like a candlestick and it is a different variety of nuts (typically walnuts or hazelnuts), dipped in grape juice, and dried.  Because I was expecting something that was more like snickers, I wasn’t a fan.  However, I still encourage you to try this traditional food anyways!

If you do try churchkhela make sure to request “fresh” to get the freshest made bar instead of something that might be older. 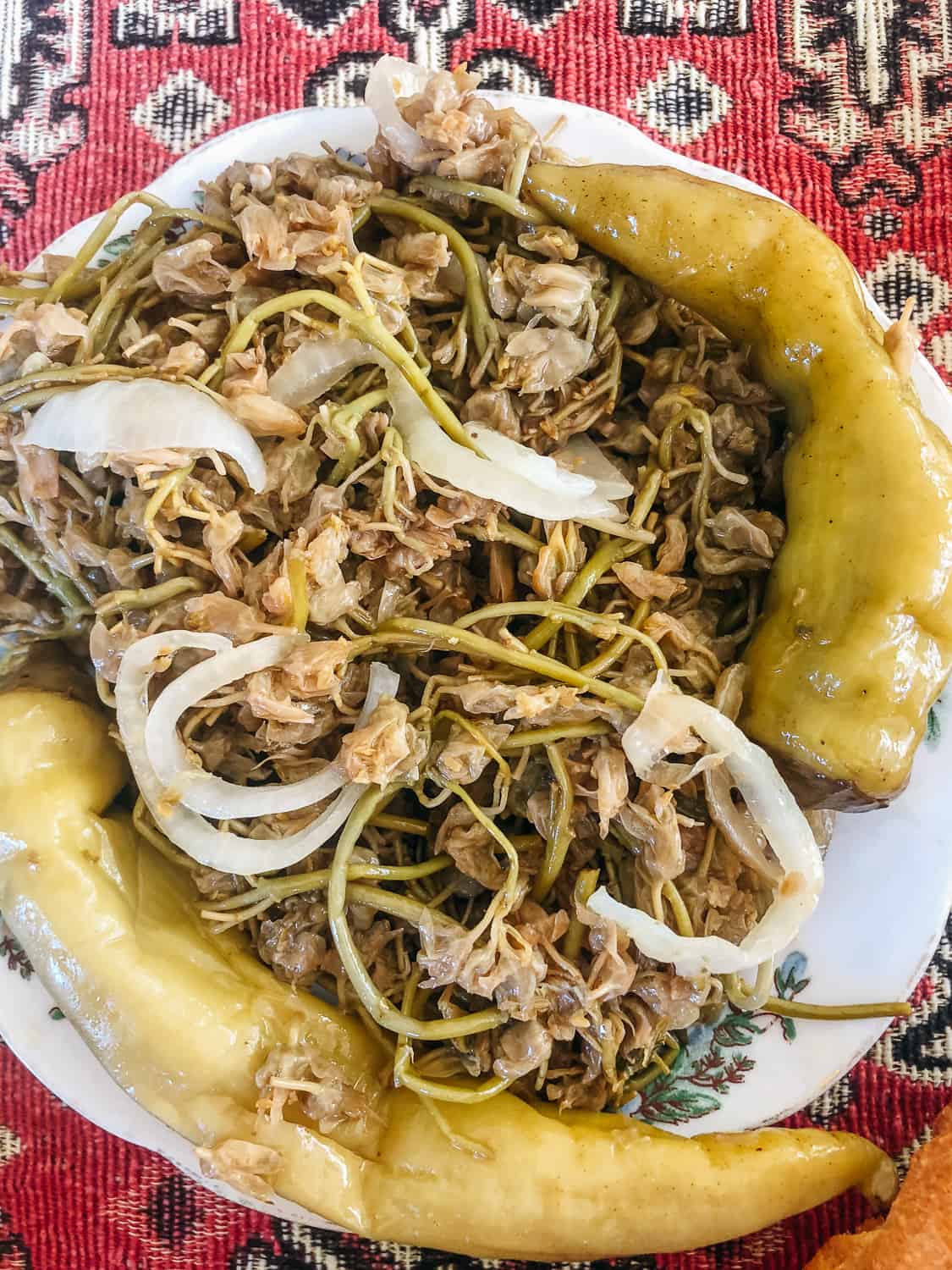 Jonjoli is a delicious appetizer served in Georgia.  While it looks unappetizing, if it’s made correctly it’s incredible!  While it was first described to me as “pickled grape leaves”, jonjoli is actually a sprout that grows in the area that is then pickled.  It’s sometimes mixed with other pickled vegetables or oils, and other times I’ve seen it served on top of dishes as a type of garnish. 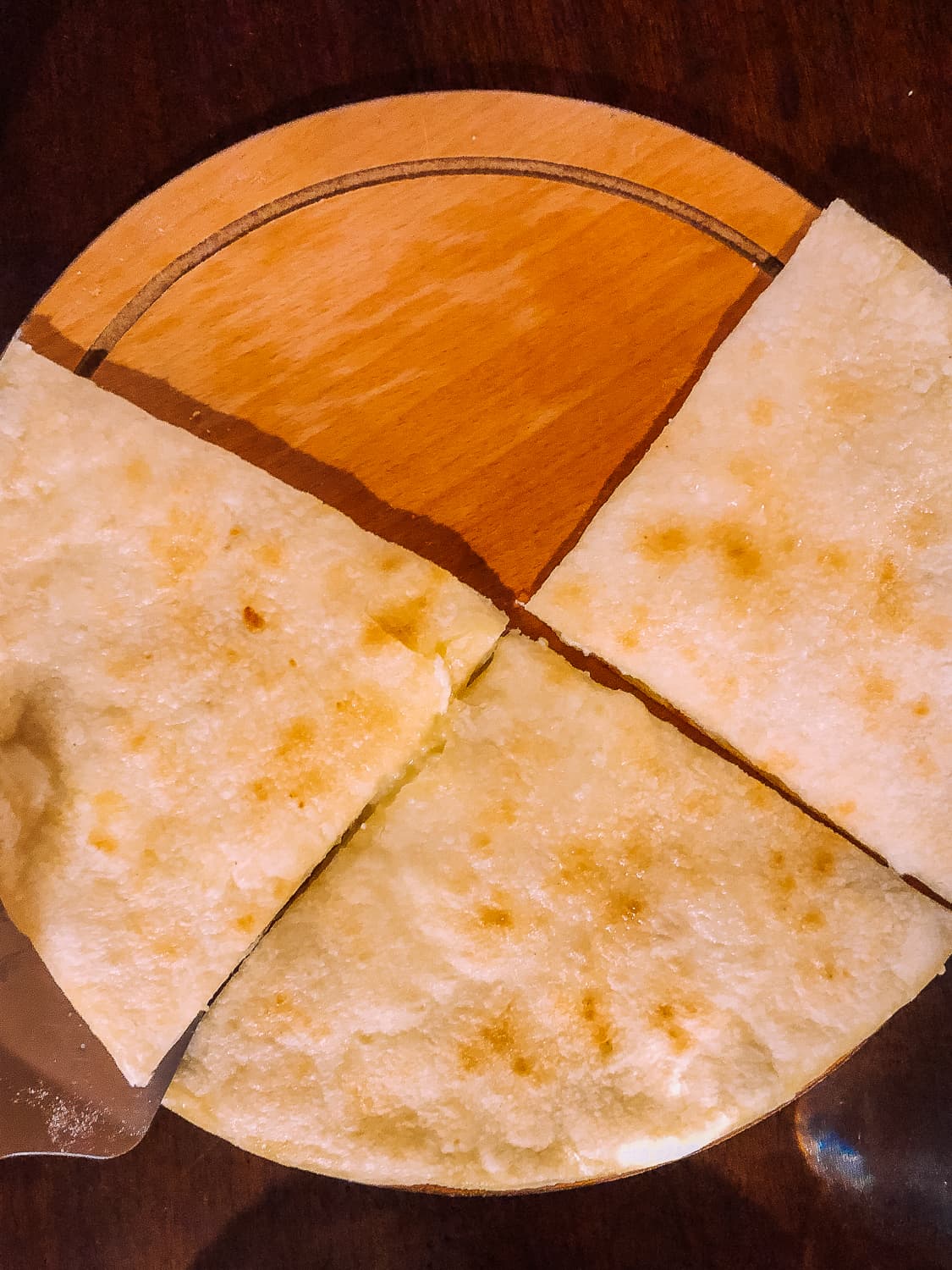 Khachapuri is one of the most widely known Georgian dishes that can be found in almost every single restaurant in Georgia.  It’s usually prepared as two pieces of bread with cheese in the middle, and butter on top, shaped like a pizza.  It kind of reminds me of a much better version of the stuffed crust part of a pizza.  There are different versions of khachapuri, like ajarian khachapuri listed above, but this is the simple version without any bells and whistles. 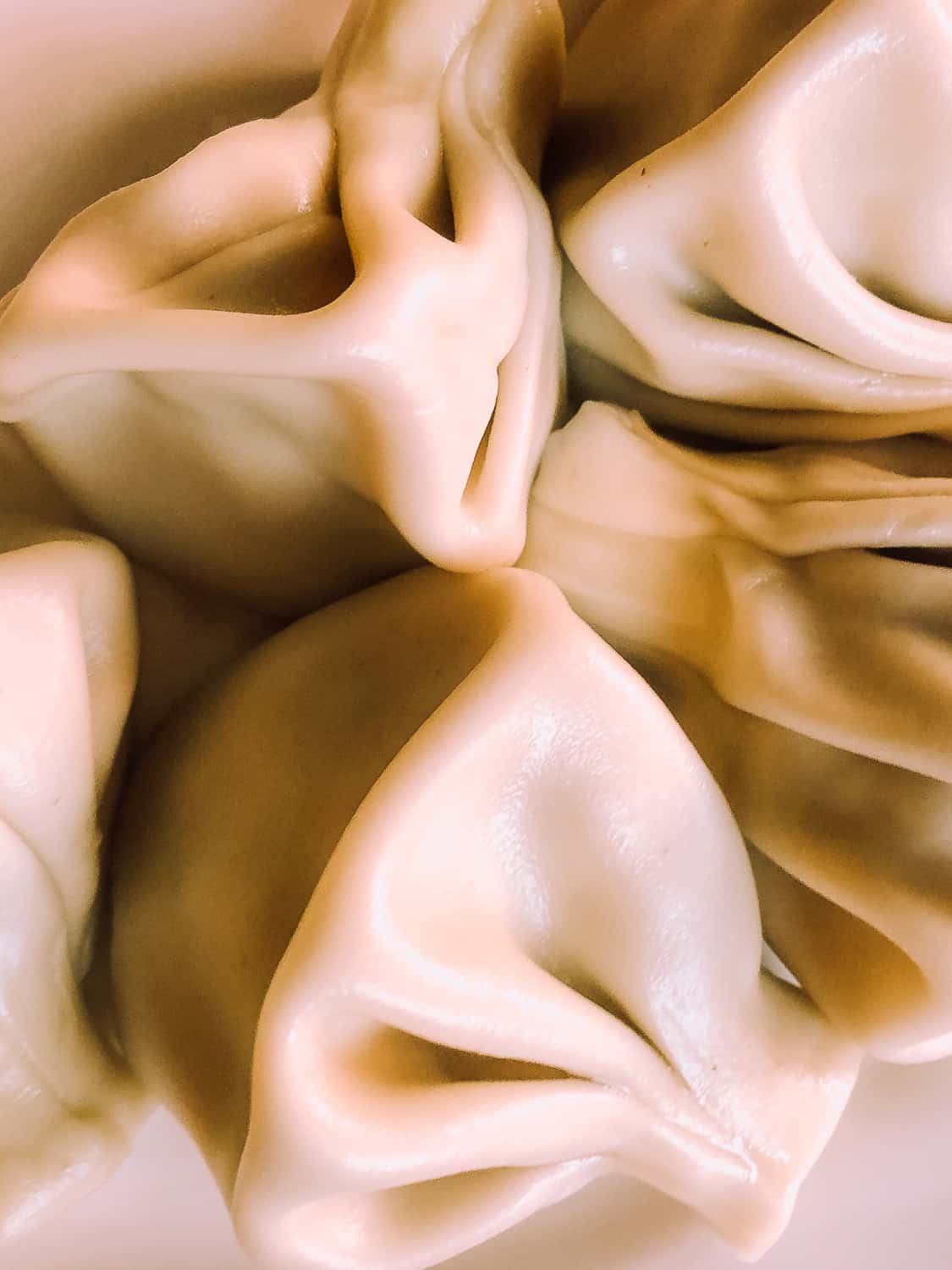 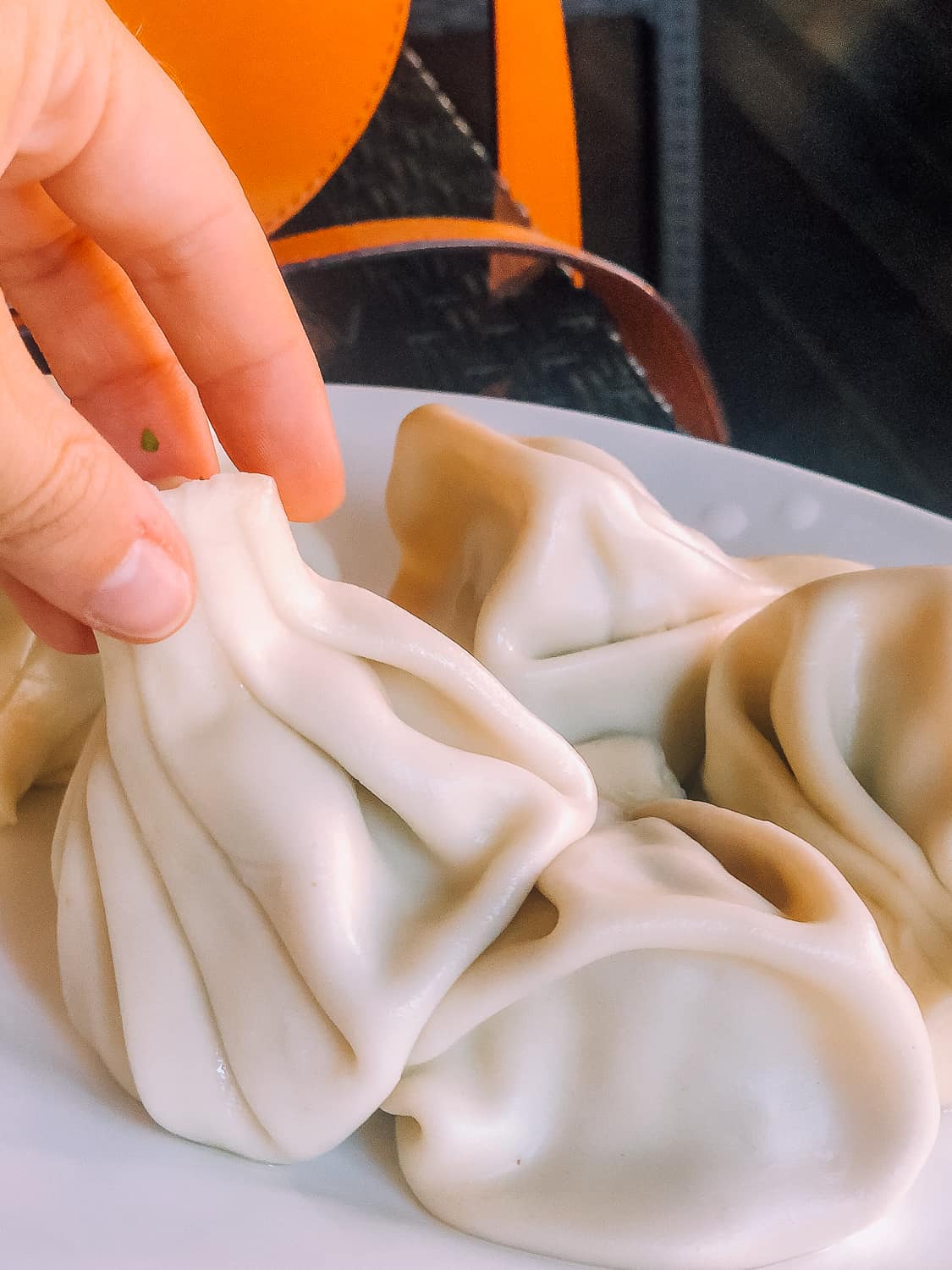 Khinkali is a large Georgian dumpling stuffed with goodies.  The traditional khinkali is stuffed with minced lamb or beef and pork, onions, and spices.  However, you can also find khinkali stuffed with cheese, mushrooms, or a variety of other things.  From my experience, every time I ordered khinkali I had to order five of the same type of “dumpling”.  They are much bigger than Asian dumplings I’ve had and five would usually fill me right up.

Where to eat khinkali:  Zakhar Zakharich in Tbilisi.  (Note:  this restaurant is unmarked and can be difficult to find.  It’s under the dry bridge market near the park and is a big blue building). 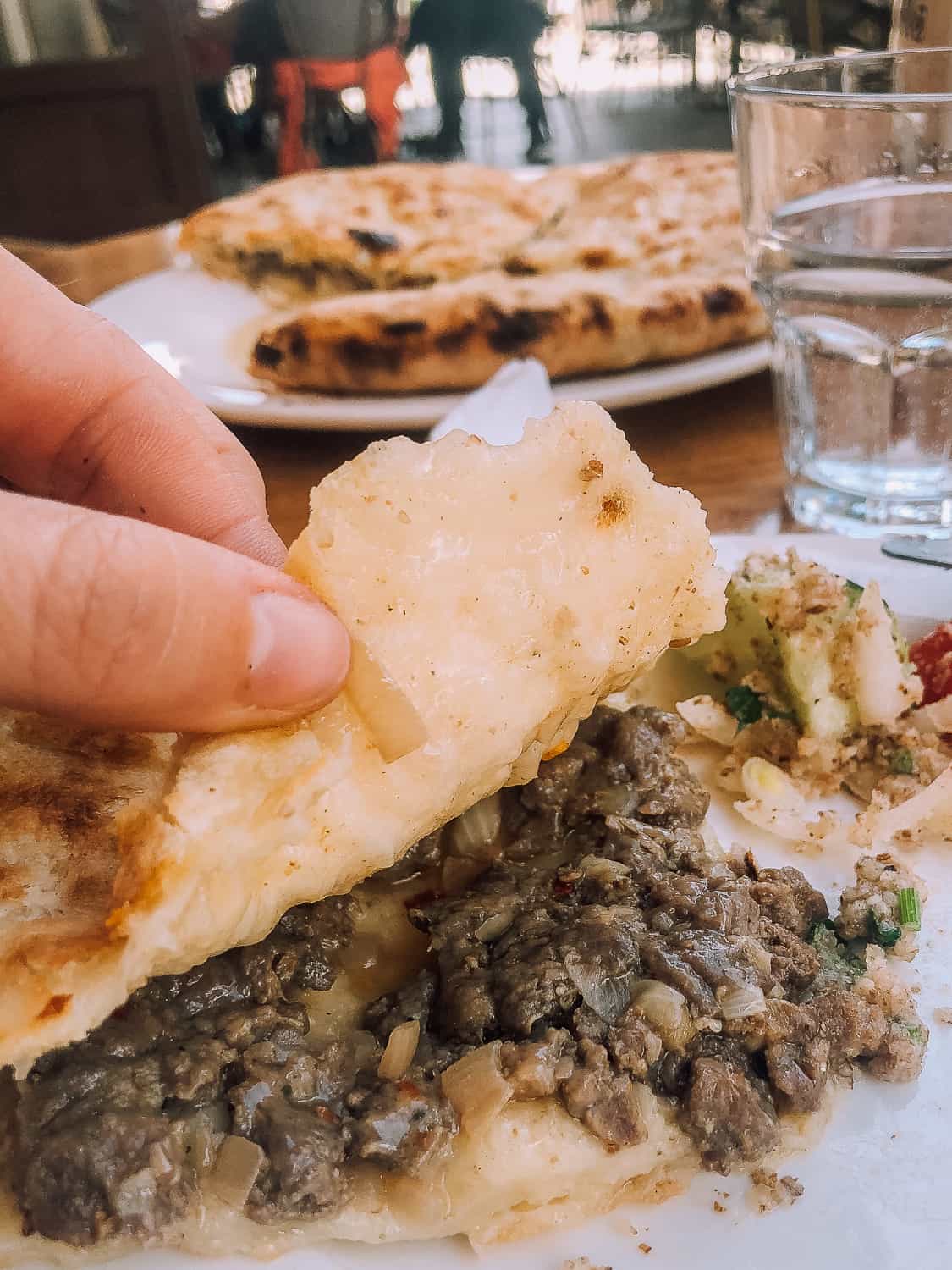 Kubdari is a play on khinkali but instead of being stuffed with cheese, the bread is stuffed with chunks of meat, usually lamb or pork, onions, and spices.  This is the main dish of the Svaneti region in Northern Georgia. 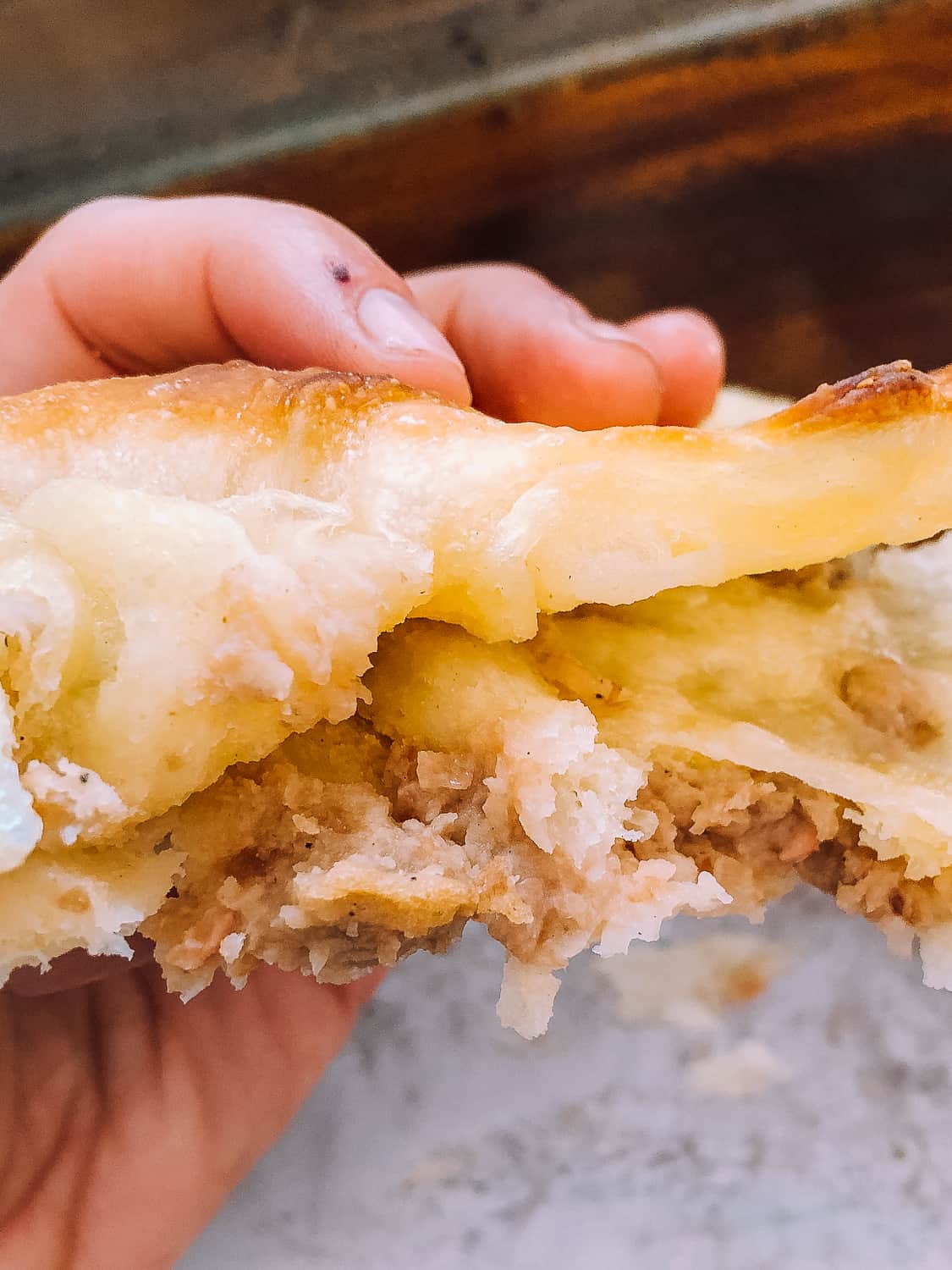 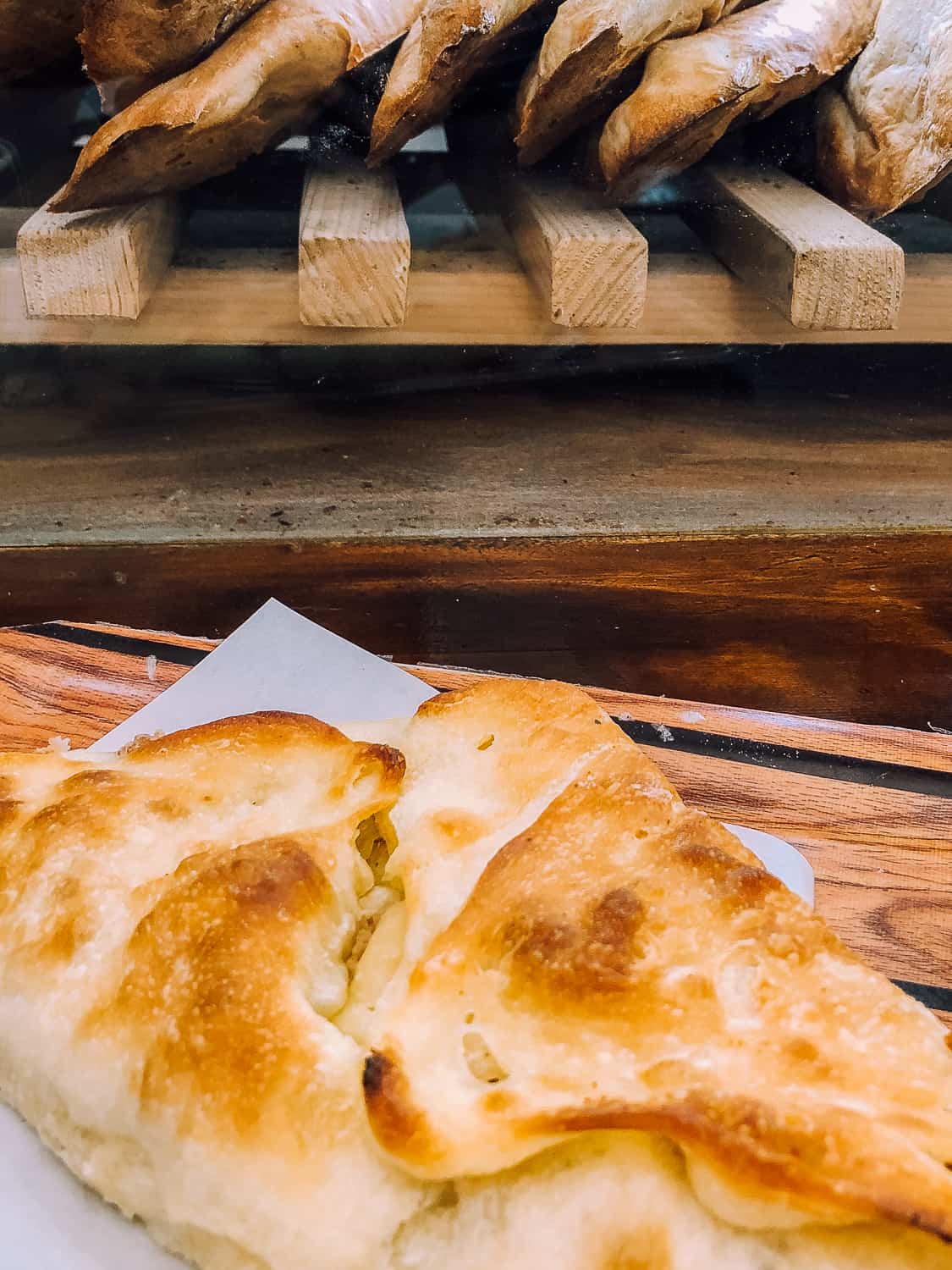 Lobiani is a bean-filled bead and is consumed all day, even for breakfast.  The consistency of the beans is kind of like refined beans and the dish is quite tasty. 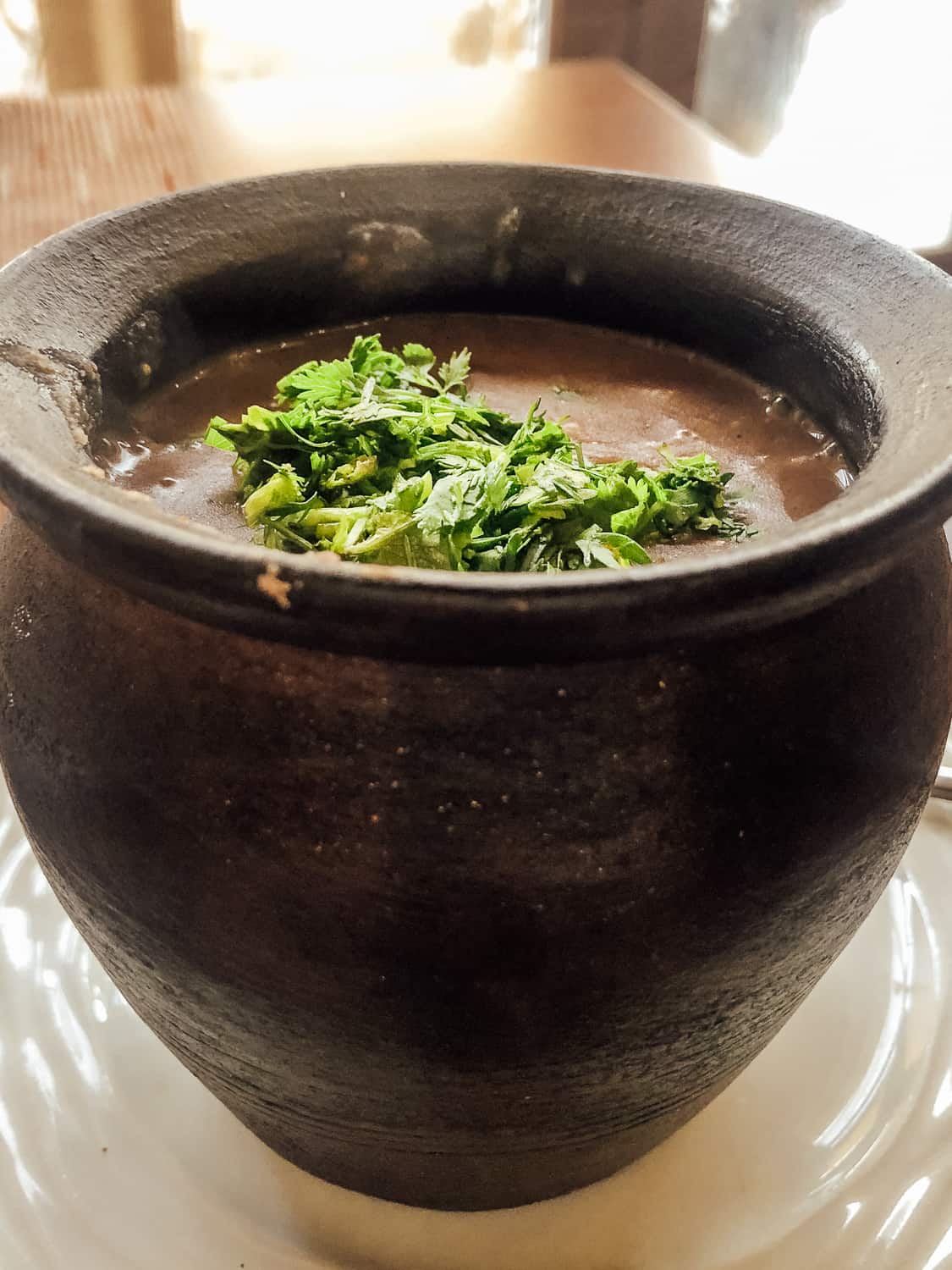 Different than lobiani, lobio is simply kidney beans that (usually) are served in a clay pot.  Of course, like most Georgian dishes, the beans are dressed with different spices for a nice, tasty side dish.  If your lobio doesn’t come with bread, I recommend ordering mchadi or puri (listed below) with it. 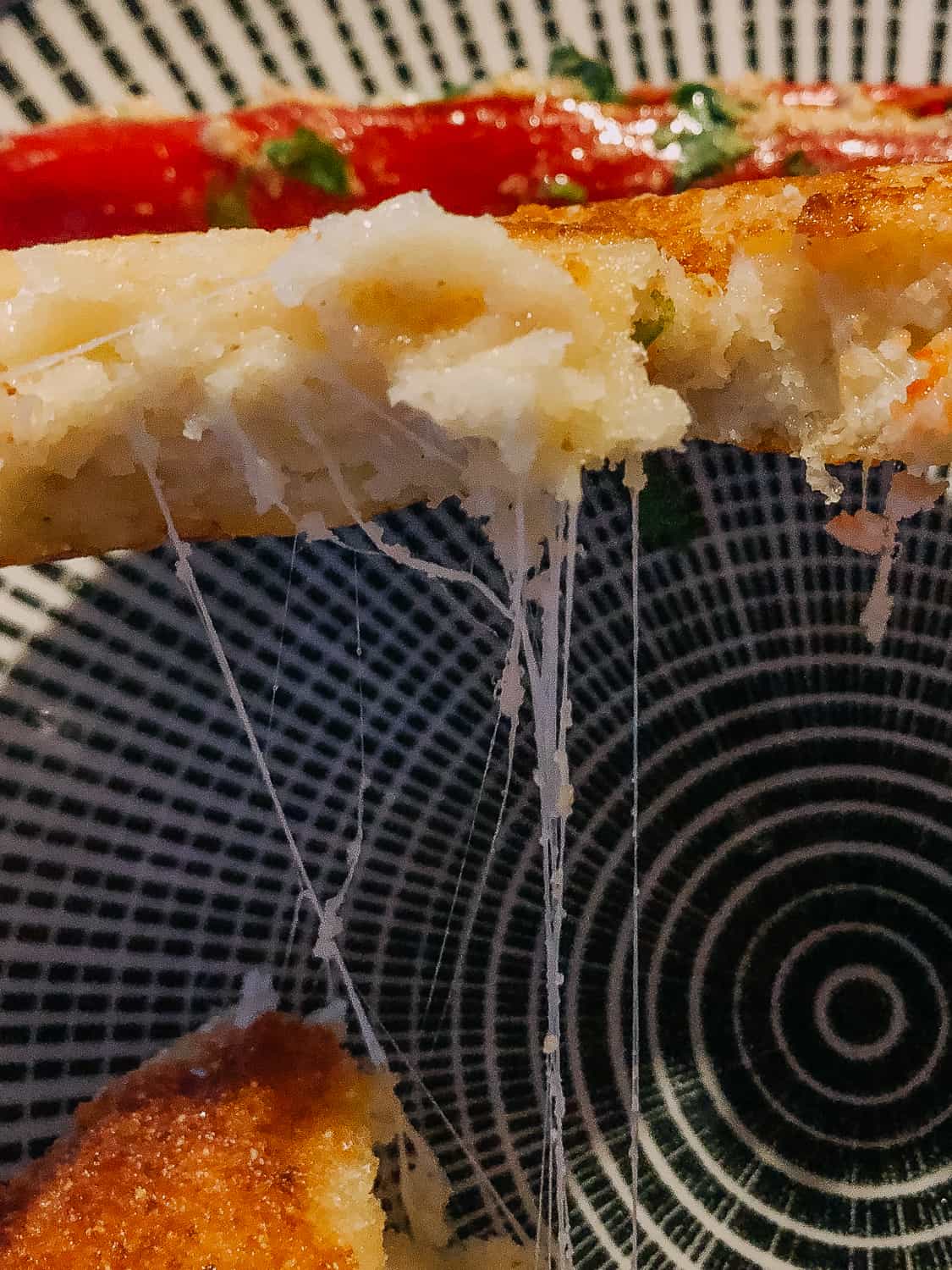 Mchadi is a traditional Georgian cornbread.  It can be served in a variety of different ways; I’ve had it fried up and served as a kind of tater-tot.  I’ve also had it served as an appetizer with cheese on top of it.  And I’ve had it resembling a sort of fried mozzarella ball.  No matter which way it’s served, definitely order mchadi if you see it on the menu. 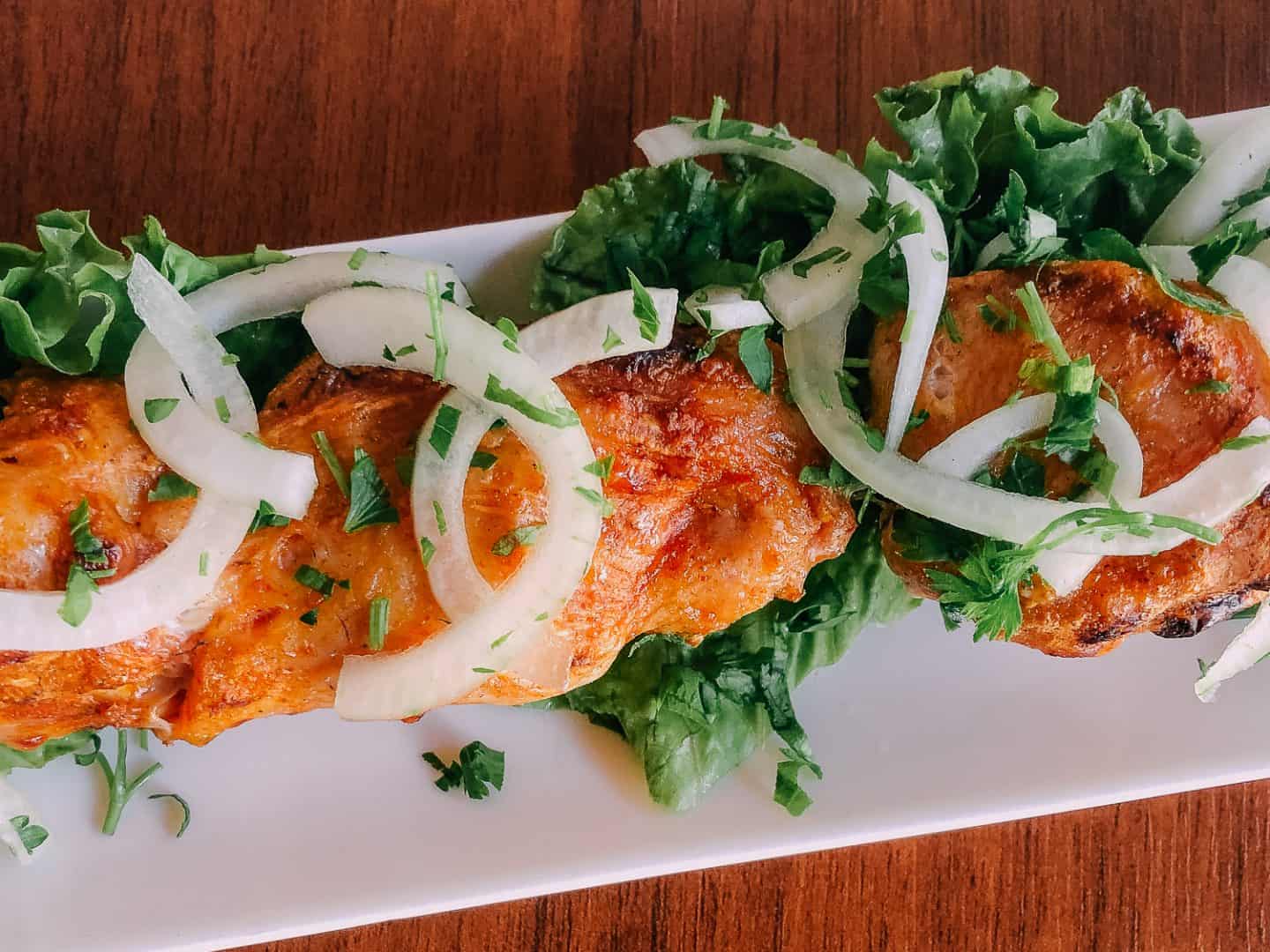 Mtsvadi is essentially a “kebab”.  It’s grilled meat – usually pork – and served cubed.  It usually comes with onions, and sometimes it comes with pomegranate or tkemali sauce on top/on the side.  Mtsvadi is a staple in Kakhetian cuisine in Eastern Georgia.

Where to eat mtsvadi:  Pheasant’s Tears in Sighnaghi 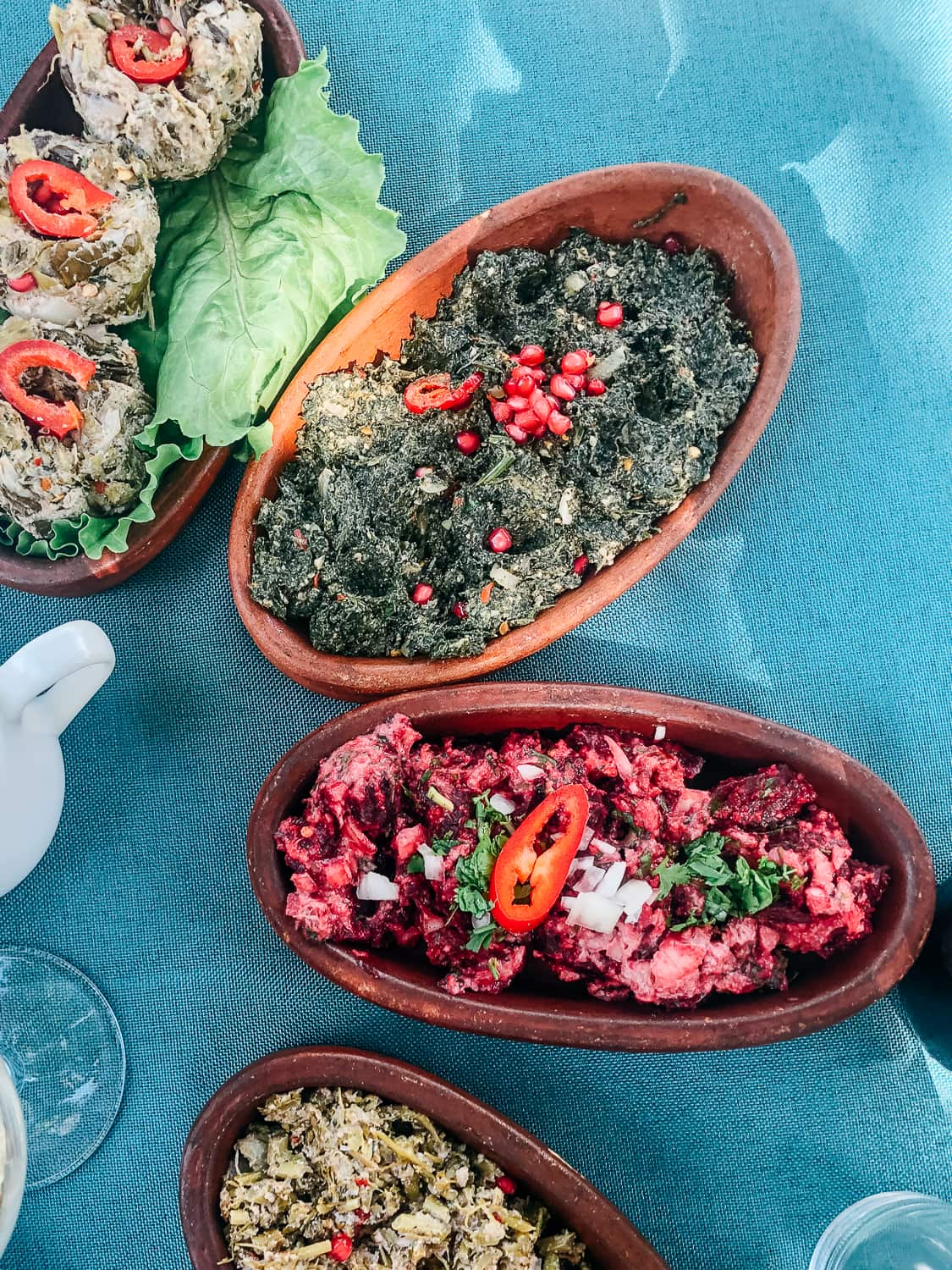 Another dish I was unprepared for being so delicious was pkhali.  Pkhali is chopped and minced vegetables, combined with garlic and herbs.  They occasionally come out in dishes or rolled into a ball shape (both are pictured above).  The sauce that traditionally accompanies pkhali is bahza – or walnut sauce.

Puri is traditional Georgian bread.  It’s made in these big circular type ovens, where the bread is flattened and put on the side of the oven to bake.  It comes out long and flat – and delicious!  If you visit Georgia I encourage you to pay attention as you walk through the streets.  You can typically find someone making puri from the shop window; it’s super interesting. 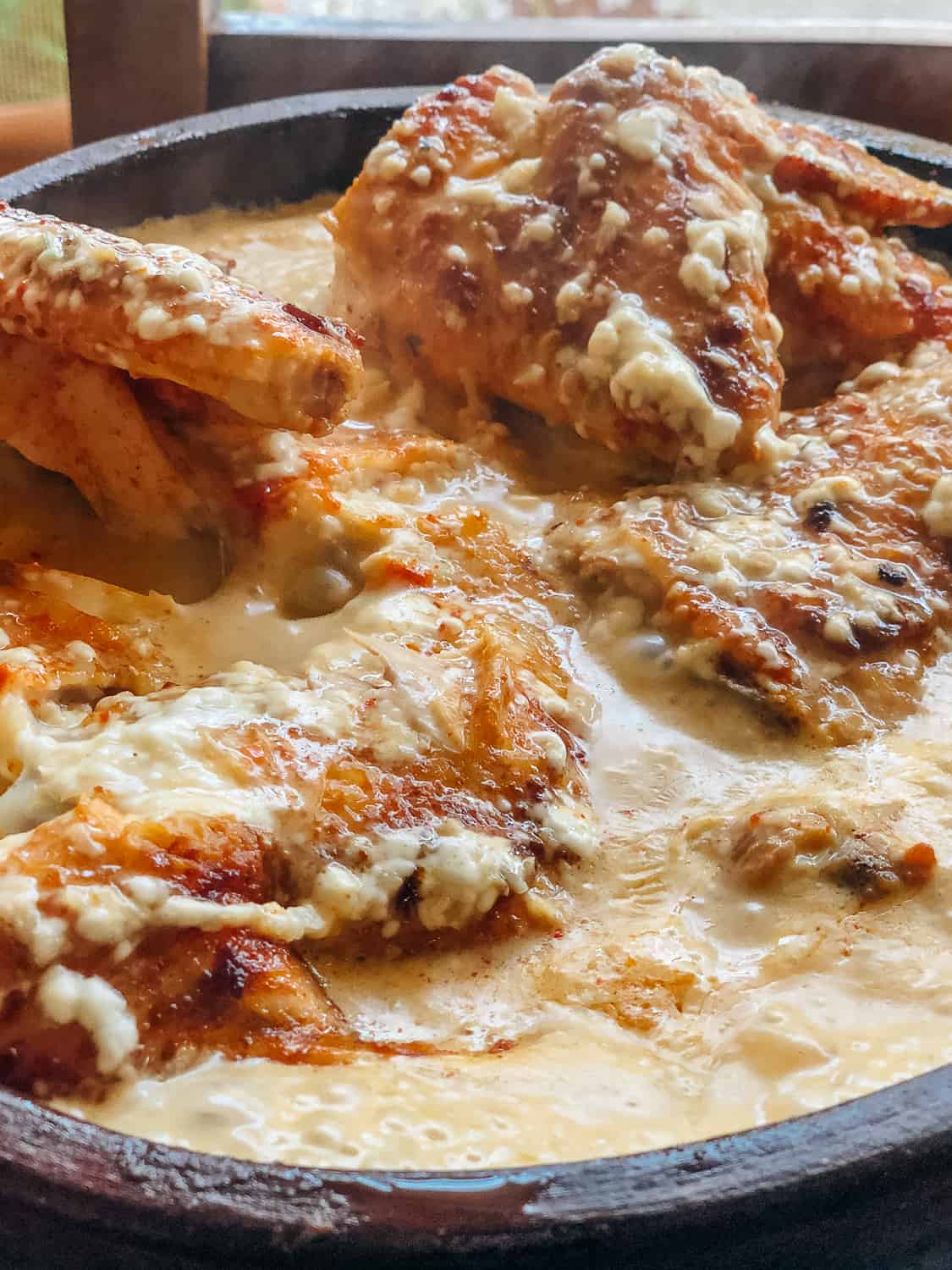 One of my absolute favorite Georgian meat dishes, shkmeruli is chicken baked in a milk and garlic sauce.  It’s divine and can be found in many places throughout the country.  If you’re a meat-eater, you don’t want to miss this dish.

Sulguni is a brined Georgian cheese that tastes salty.  Its consistency is that between a soft cheese and a hard cheese.  It’s found in the Samegrelo region (Svaneti region) of Western Georgia but is served all over the country.

Tkemali is a widely popular and traditional sauce found in Georgian cuisine.  It’s made of plums and tastes surprisingly sour (or tart).  It’s usually put on top of meat dishes and poultry dishes and is even compared to ketchup as being a sauce that Americans use in the US.  I didn’t love the taste of tkemali but I still encourage you to try it. 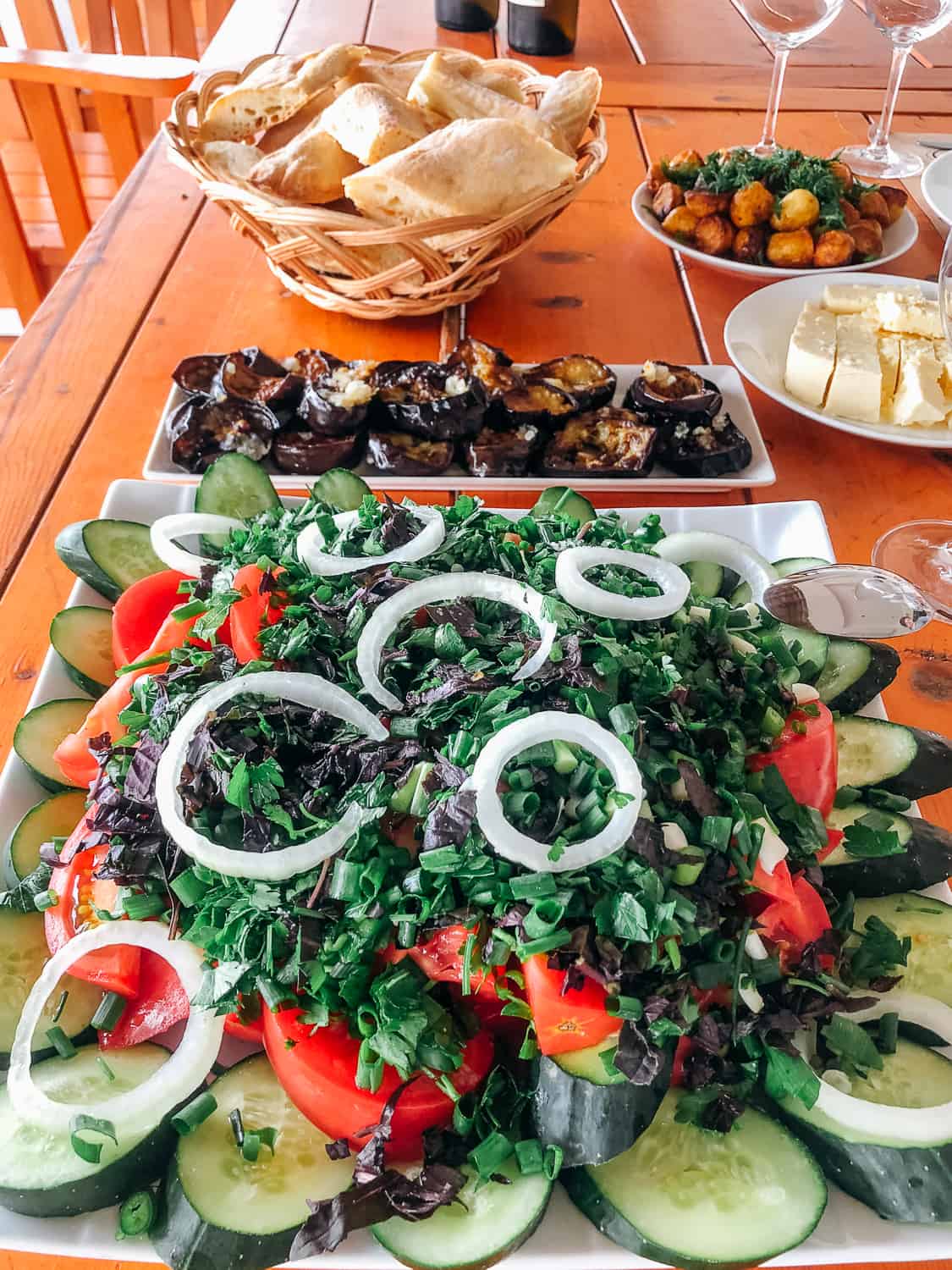 While this isn’t unique to Georgia, the Georgians have their spin on the tomato-cucumber salad.  This dish is served in just about every restaurant in Georgia and is typically tomatoes, cucumbers, onions, oil, and herbs.  Sometimes it’s offered with/without nuts and the nuts used are usually ground-up walnuts.

While there are many reasons that Georgia should be on your bucket list, I’d argue that the food alone is good enough to venture to Eurasia.  Georgian foods are unlike any other food I’ve had around the world and you can tell that the locals take great pride in their cooking and using traditional methods of creating fantastic meals.

What are some of the best Georgian foods that have you eaten that are not on this list?  Let me know in the comments below!

If you plan on Visiting Georgia, don’t miss these posts:

Everything You Need to Know About Visiting Georiga 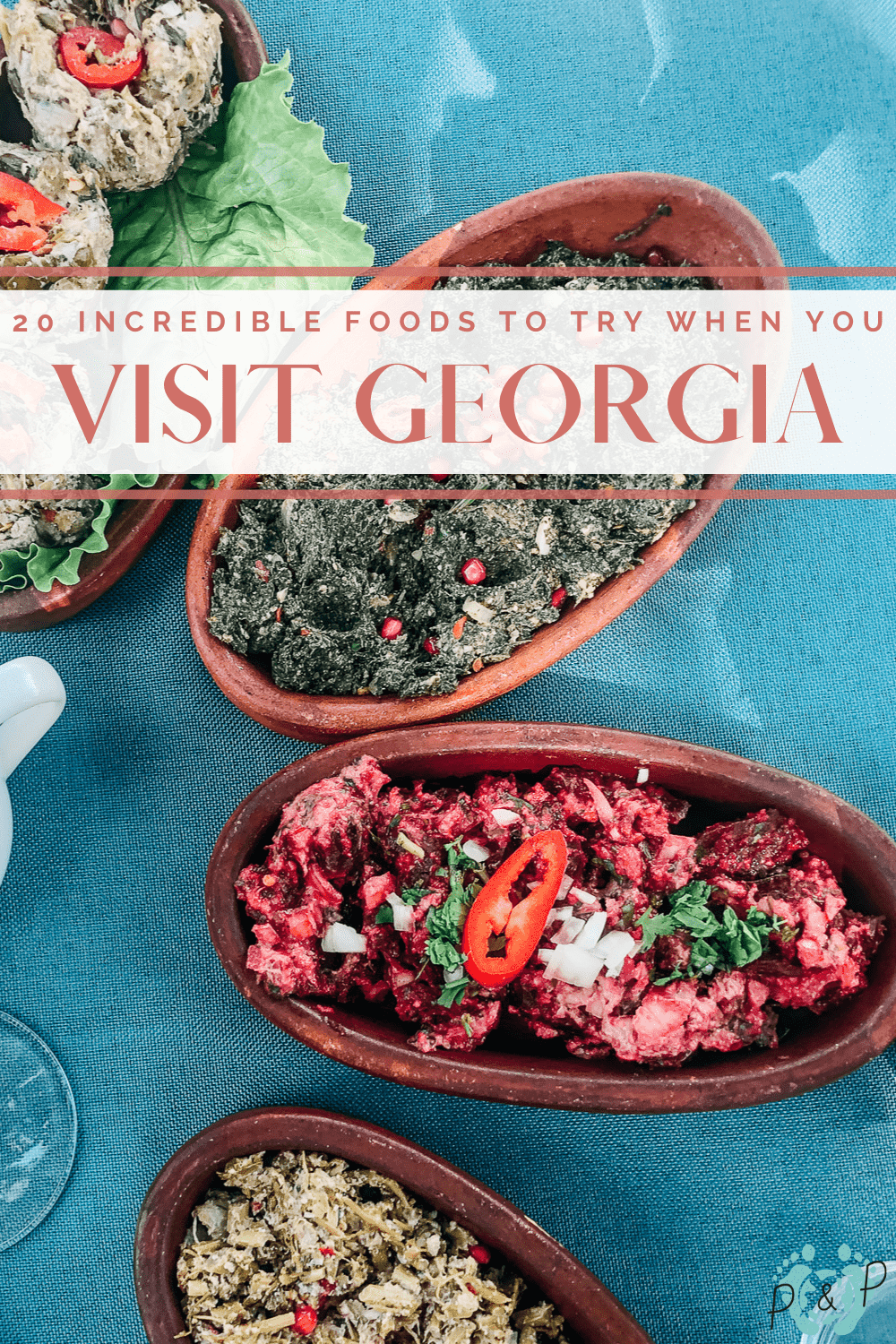 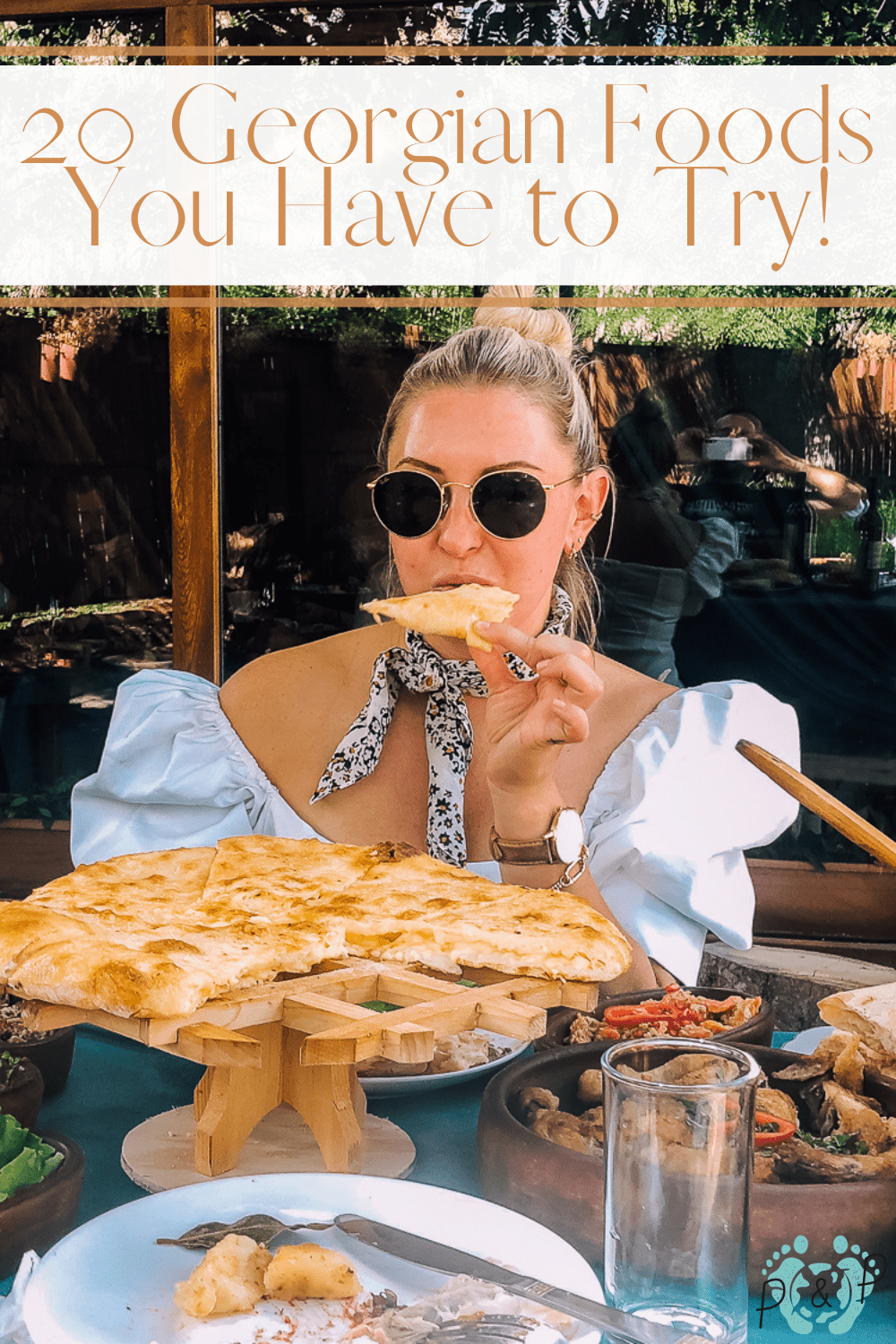