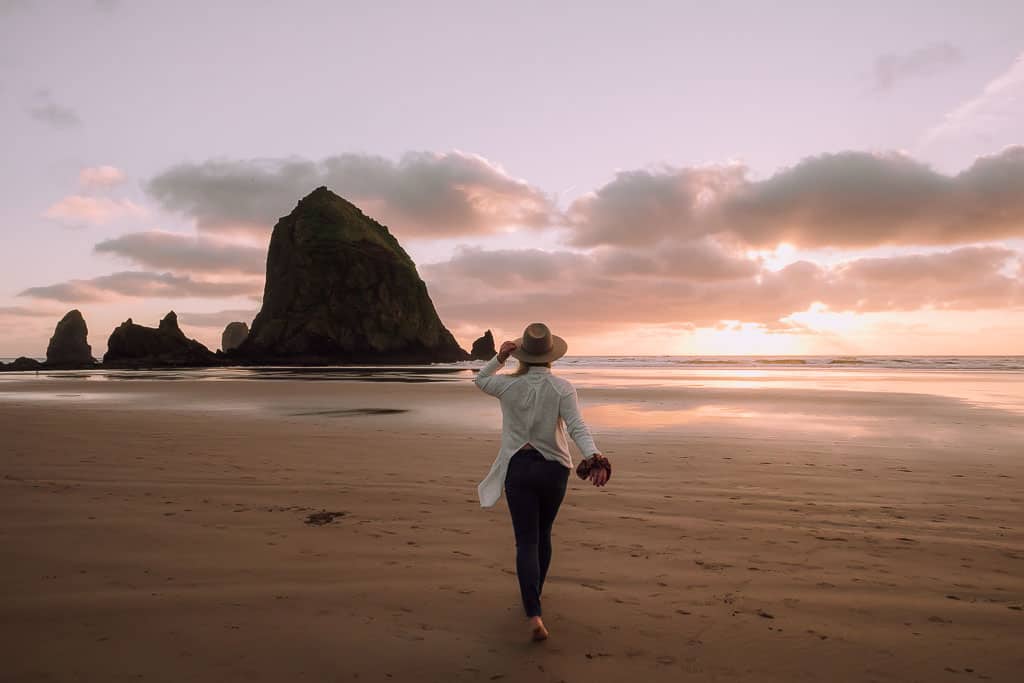 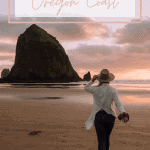 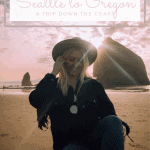 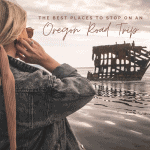 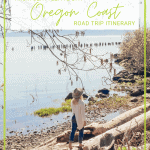 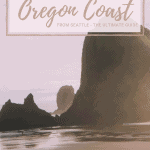 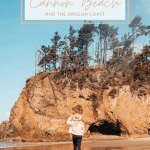 I glanced in the rearview mirror one last time as I watched the tall skyscrapers of Seattle get smaller and smaller until they finally disappeared.  I was leaving behind Seattle for a road trip south, down the Oregon coast.  My Oregon coast road trip itinerary essentially consisted of having no plans.  I had no hotel and no idea how long I would be gone.  With an overnight suitcase, a book, no expectations, and hopes to make it to Cannon Beach I blasted Taylor Swift and drove down the interstate until I came to the most beautiful coastal views I have ever seen.  As it turns out, my Oregon coast road trip was exactly what I needed to get away from Seattle for a couple of days and cure my itchy feet.

Are you planning a road trip?  Before starting make sure to check out 6 Solo Road Trip Tips – How to Have An Epic Road Trip When You’re Alone 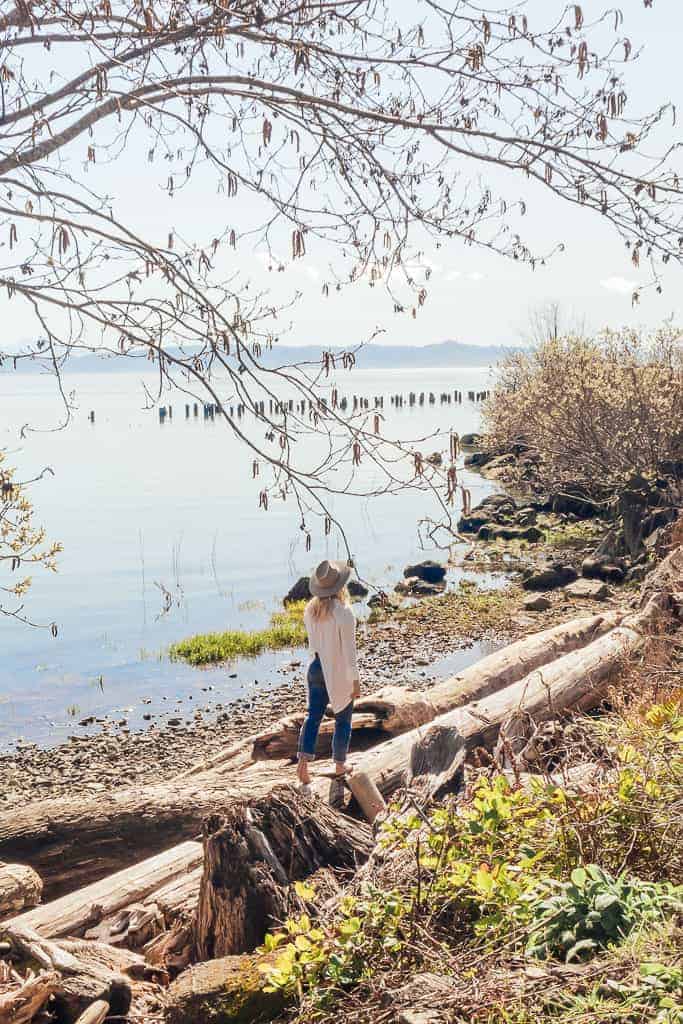 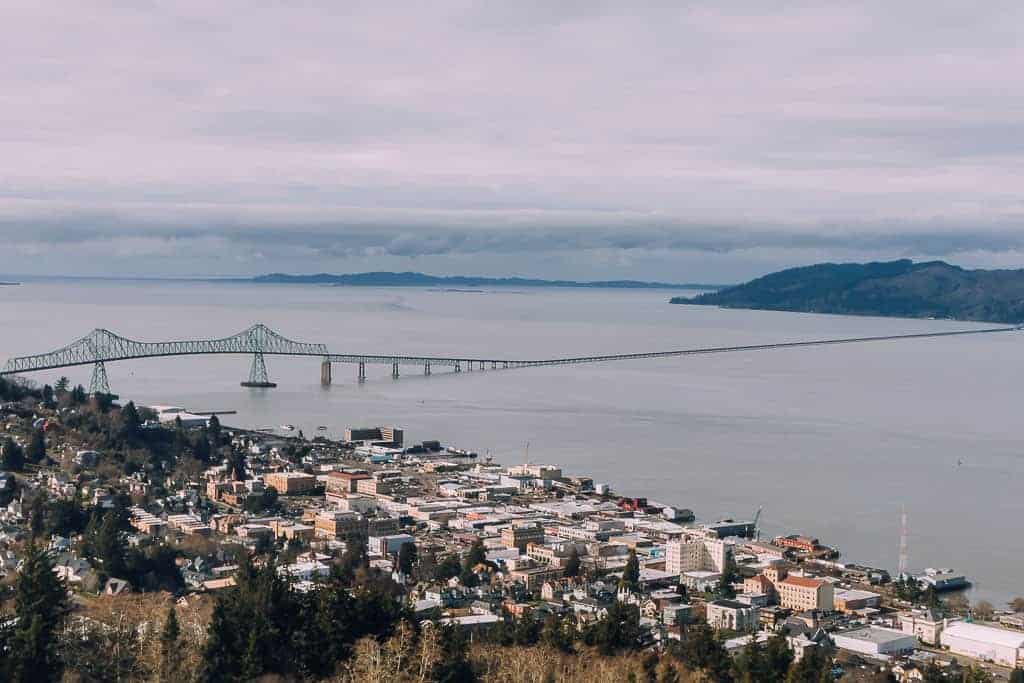 From Seattle heading south to Oregon, it takes about 3-hours to cross state lines.  I chose to start in Astoria and make my way south from there.  Founded in 1811, Astoria is a small town located on the northwestern tip of Oregon.  It was the first city that was settled in the west of the Rocky Mountains and comes from a past filled with a dark history of violence and crime.  Astoria has now overcome those things and to this day is a charming beach town worthy of a stop.  It’s also recognized for being the location where The Goonies was filmed.

Astoria sits on the south shore of the Columbia River and looks across the river at Washington.  Before 1966 when the Astoria-Megler Bridge was finished a passenger ferry operated between Oregon and Washington to get people from state to state.  As you drive towards Oregon opt for the route that will take you across the bridge into Astoria.  It feels like quite a drive to cross the Columbia River but the scene in front of you as you cross into Oregon is well worth it.

While you’re in Astoria make time to slow down and some of the Oregon coast attractions.  After driving across the Astoria-Megler Bridge, head to the Astoria Column.  Built-in 1926, this concrete column overlooks the entirety of Astoria.  Only $5 to access, it’s great for getting out of your car and stretching your legs as you climb the 164 stairs to the top.  If you have time and you’re a movie buff, don’t miss the Oregon Film Museum (I’m not much of a movie buff so the movie references were lost on me).  Based in an old jail, the film museum is a small and cheesy display of movies that have been made in Oregon.  Entrance for adults is $6, kids $2. 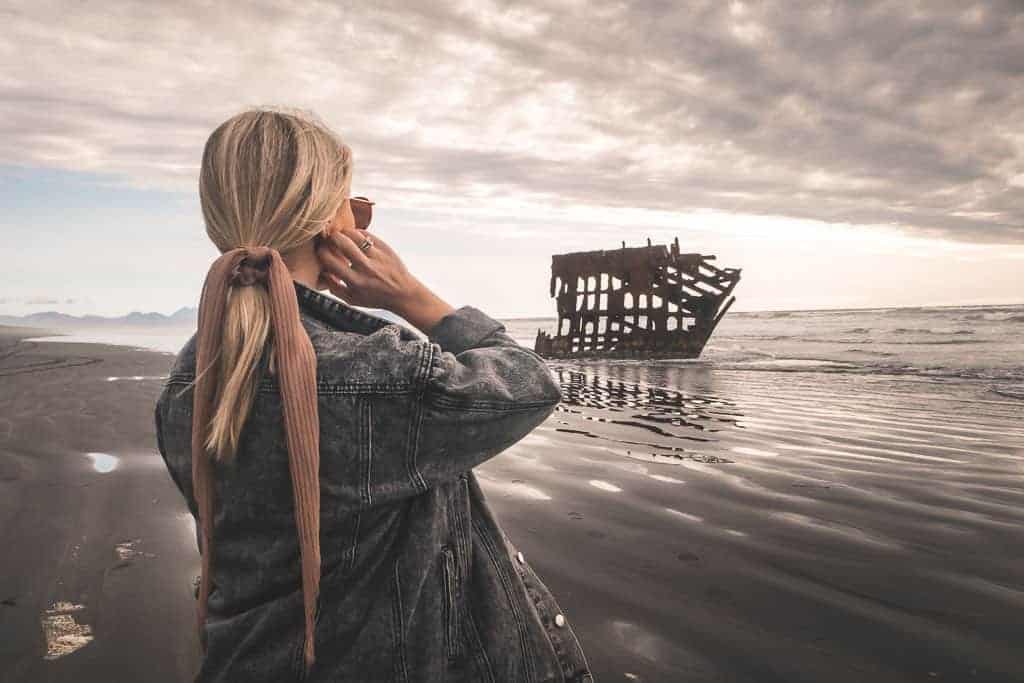 Next on the Oregon coast itinerary is Fort Stevens State Park.  From Astoria drive 11-miles to the very northwest tip of Oregon to find this park.  Once a military installation during the Civil War, it’s now a public park where you can hike, bike, lay on the beach, and even whale watching!  While I was there I chose to visit the Wreck of the Peter Iredale.  It’s a skeleton of a boat that ran ashore and was abandoned in 1906.  The entrance to the park costs a small fee (look here for information on which ticket will best suit you), the park is well signed, and there are parking lots located throughout. 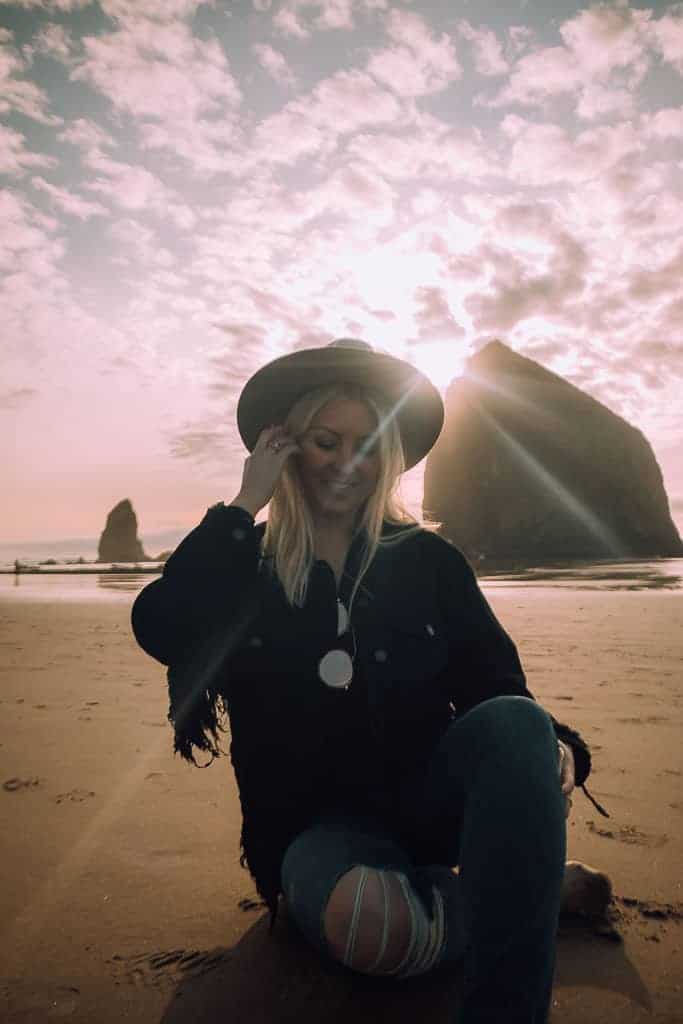 After spending time in northern Oregon I once again hopped in the car and made my way down south towards Cannon Beach.  From Fort Stevens State Park, Cannon Beach is located directly south, 24-miles from Fort Stevens.  I checked into my hotel, Hallmark Resort Hotel & Spa, and headed straight for Haystack Rock.

Arriving at Cannon Beach for sunset was the highlight of my Oregon coast road trip.  Miles of beach stretched out before me as the sunset behind the Pacific.  The sky transformed into a hazy pink and fiery orange before the temperature dropped just as quickly as the sun disappeared. 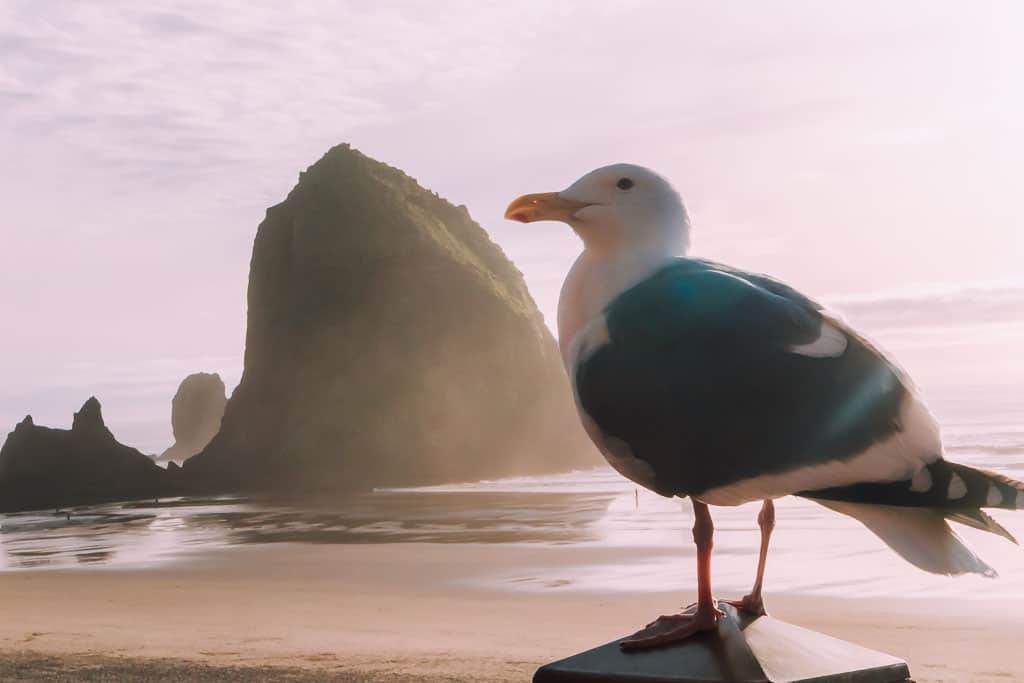 One of the best places to visit on the Oregon coast is Cannon Beach.  It’s known for its beautiful sandy beaches sea stacks lined along the ocean shore, laid back vibe, and quaint downtown.  Aside from the outdoor aspect of Cannon Beach where you’ll find beaches and state parks aplenty, downtown also offers an array of things to do.  If you venture downtown you’ll find coffee shops, restaurants, bars, boutiques, and galleries.  There’s a multitude of reasons to head to Cannon Beach from Seattle.  It being a low key getaway destination and easy to get to is what prompted me to venture south in the first place.  The rest of what I did and found along the way was just icing on the cake! 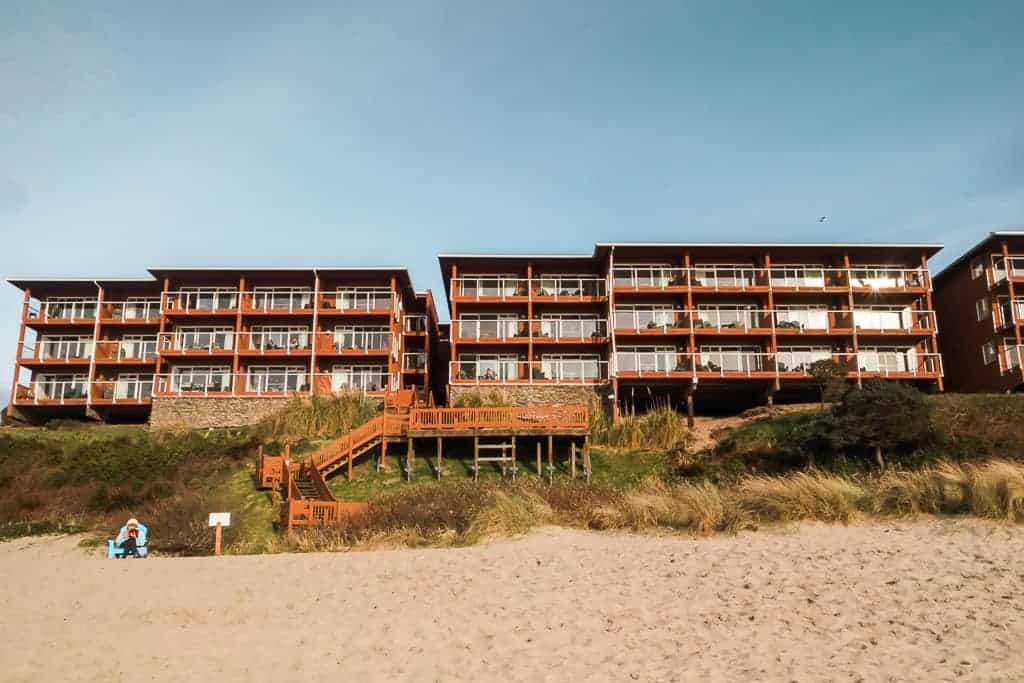 Located near Haystack Rock, Hallmark Resort is an ideal hotel based on location and amenities.  Not only is the hotel on the beach, but its also walking distance to downtown Cannon Beach.  The beach is easily accessed by a set of stairs taking you from the hotel down to the sand where you’ll find lounge chairs accessible to guests of the hotel.  You can also rent firewood and s’mores baskets for a fire by the beach.  If you find that the weather isn’t accommodating for outdoor activities, the hotel also has an indoor pool, hot tub, and full-service spa.

If the Hallmark Resort doesn’t pique your interest, instead check out Surfsand Resort. 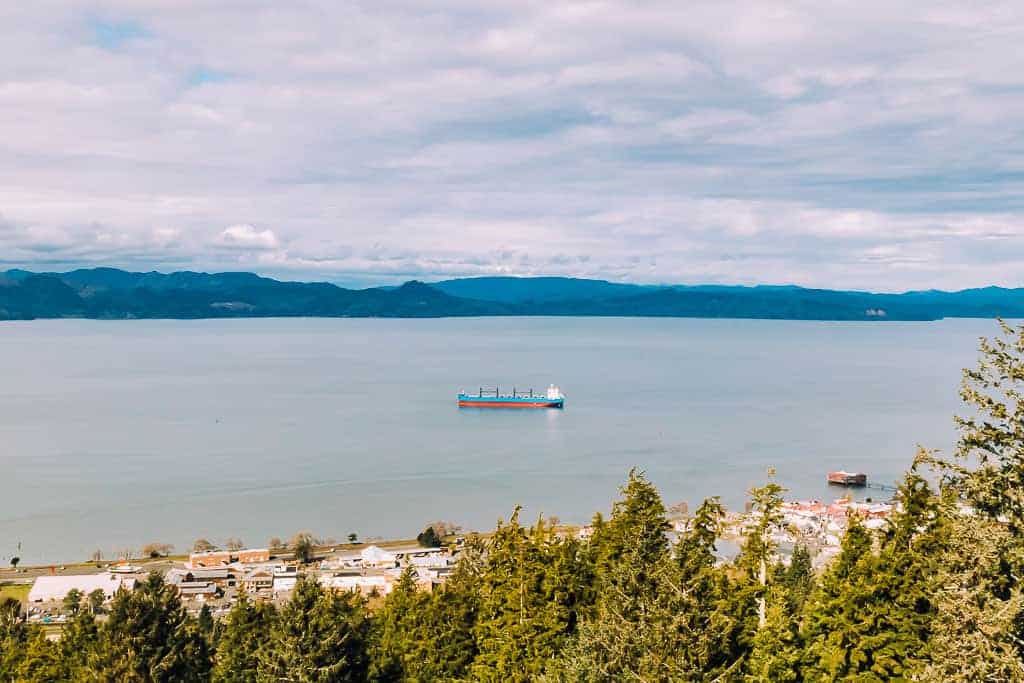 A walkable town, Cannon Beach doesn’t have much to offer in terms of ride-sharing.  Sure, you can drive your car and there is plenty of parking located downtown but know that both Uber and Lyft do not operate in Cannon Beach.  If you’re staying at the Hallmark Resort, parking is included in the room price.  At the time of writing, I don’t know of any public transportation options available.

Things to See and Do in Cannon Beach 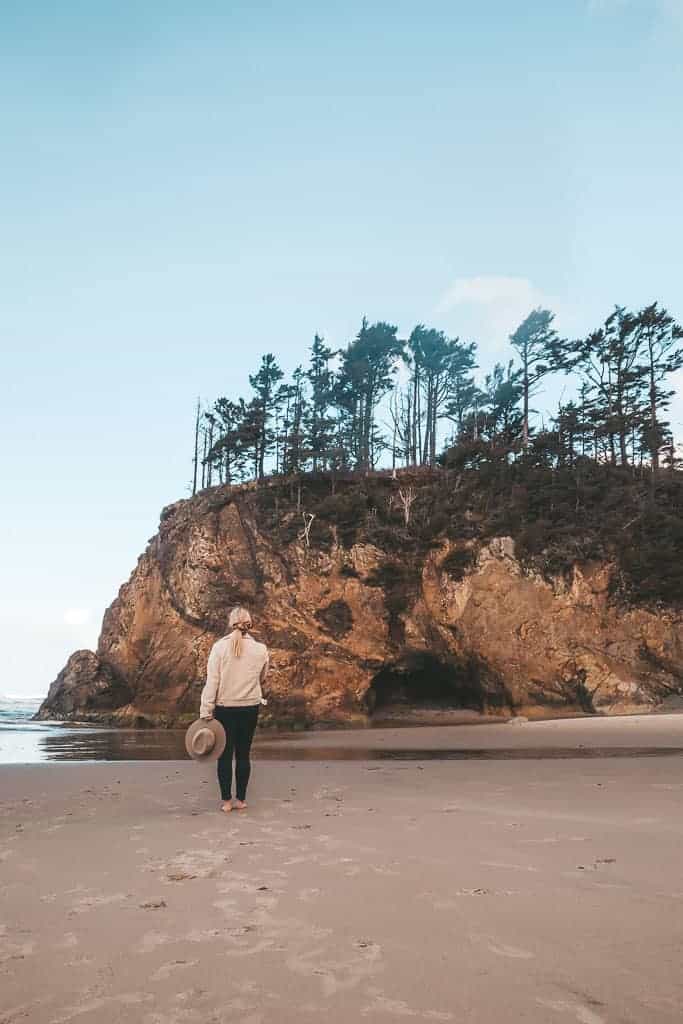 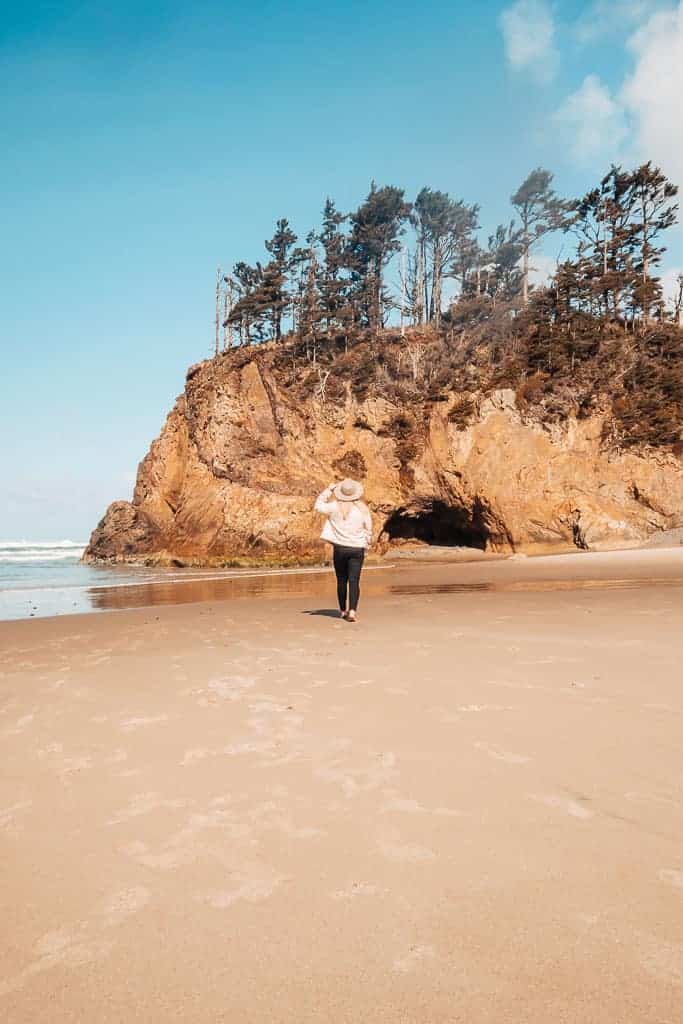 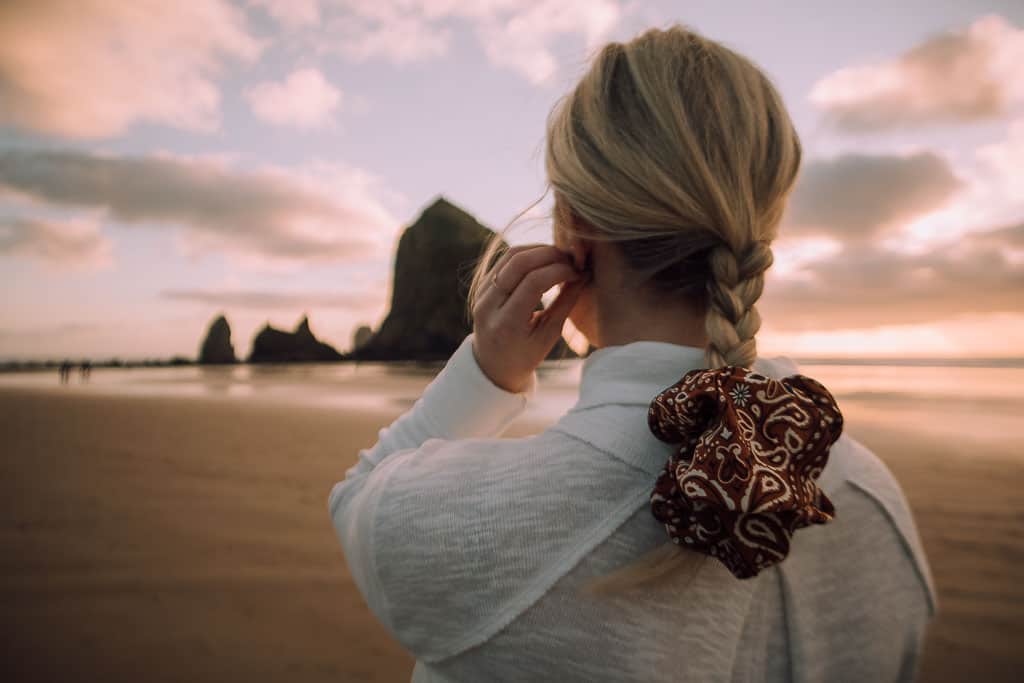 Haystack Rock:  Haystack Rock is a 235-foot sea stack in Cannon Beach.  At low tide, you can walk out to Haystack Rock, but be mindful of the tides.  During the spring to mid-summer Tufted Puffins can be observed on Haystack Rock.  I recommend visiting when the sun goes down for an incredible sunset experience as the sun lowers behind the horizon.

Arch Cape:  A few miles south down the coast from Haystack Rock you’ll come to the more secluded Hug Point State Recreation Site in Arch Cape.  Here you’ll find sea caves and waterfalls.  At low tide, you can walk along the beach but at high tide prepare to swim.  There is a free parking lot located within walking distance from Hug Point.

Ecola State Park:  If you’re looking for hiking, sightseeing, and viewpoints don’t miss Ecola State Park.  North of Cannon Beach two of the most popular hikes to do at this park is to Crescent Beach or Indian Beach.  To access Ecola State Park a permit is required – $5 – and can be purchased at the fee station at the park’s entrance. 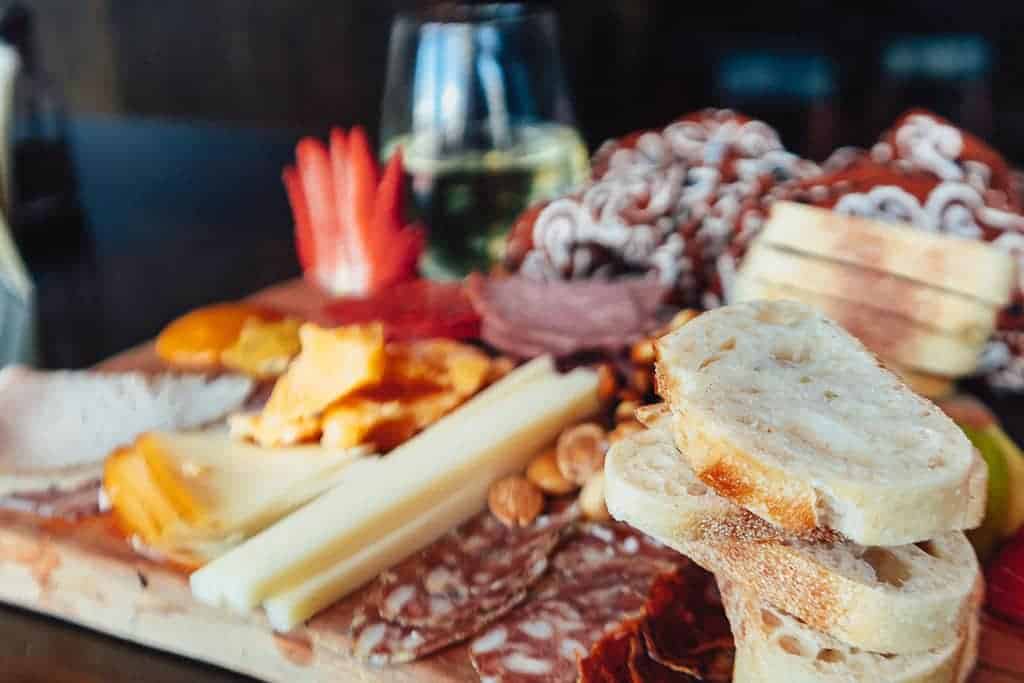 The Wayfarer Restaurant and Lounge:  A seafood restaurant located on the beach with great views of the sea stacks.  I only thought that this restaurant was mediocre and would not return.

Insomnia Coffee:  For your morning coffee or afternoon pick me up.

Pelican Brewing:  A laid back brewery near Hallmark Resort.  The food is only mediocre and the atmosphere was subpar.  I would not return here but if you’re looking for a quick place to grab a beer this is an okay option. 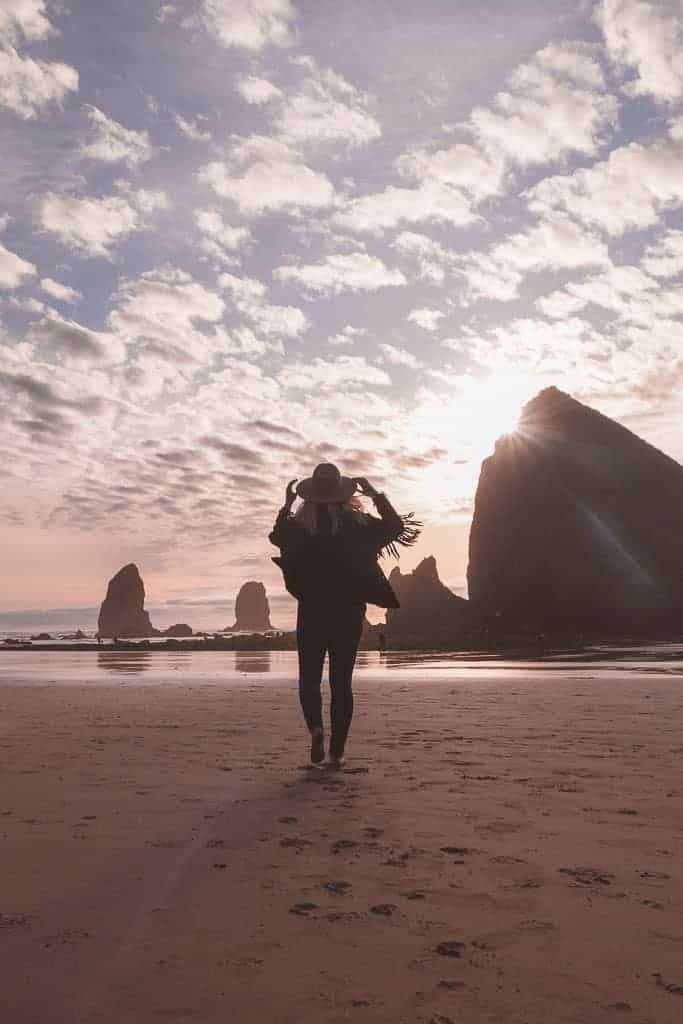 Make sure to wake up early enough to catch the sunrise before heading back to Seattle (or wherever it is you came from).  On your last day in Cannon Beach spend time downtown or doing hikes that you may have missed before venturing back north and completing your Oregon road trip itinerary.

After spending two days driving the peaceful coast of Oregon I was reminded what makes travel so special. It’s the eye-opening experience of seeing other towns, other places.  Talking to new people and hopefully making a new friend along the way.  The Oregon Coast cities are quaint, filled with things to do, and have the most friendly people.  The next time I visit Oregon I plan to have an even more robust Oregon Coast road trip itinerary.  After all, there are endless things to see and do along the coast.

For more day trip ideas from Seattle, check out these posts:

For more information on the Oregon Coast and ideas on things to see and do, check out my Instagram page/highlight reel “Oregon Coast”.  Or search the hashtag #ppinoregon 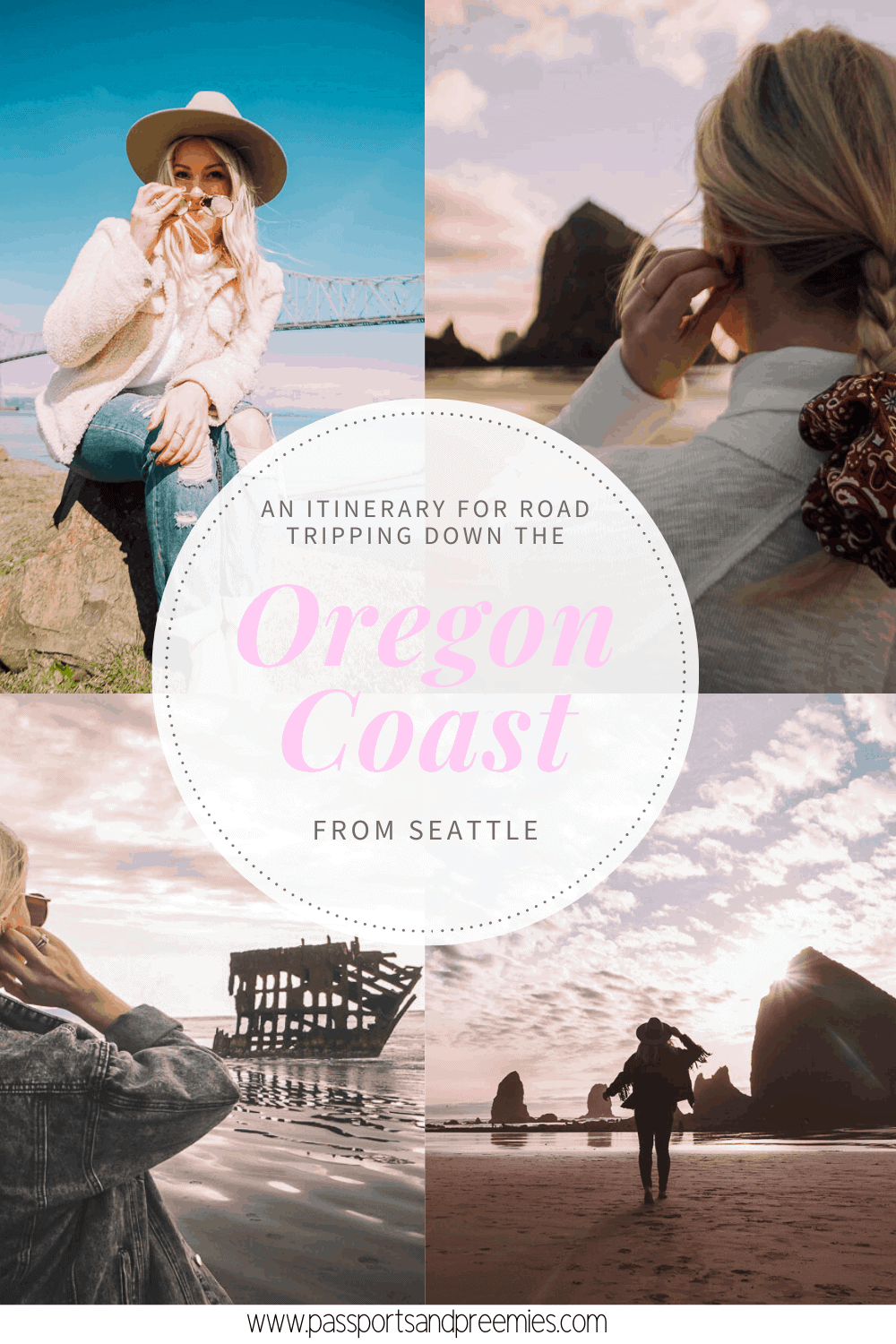 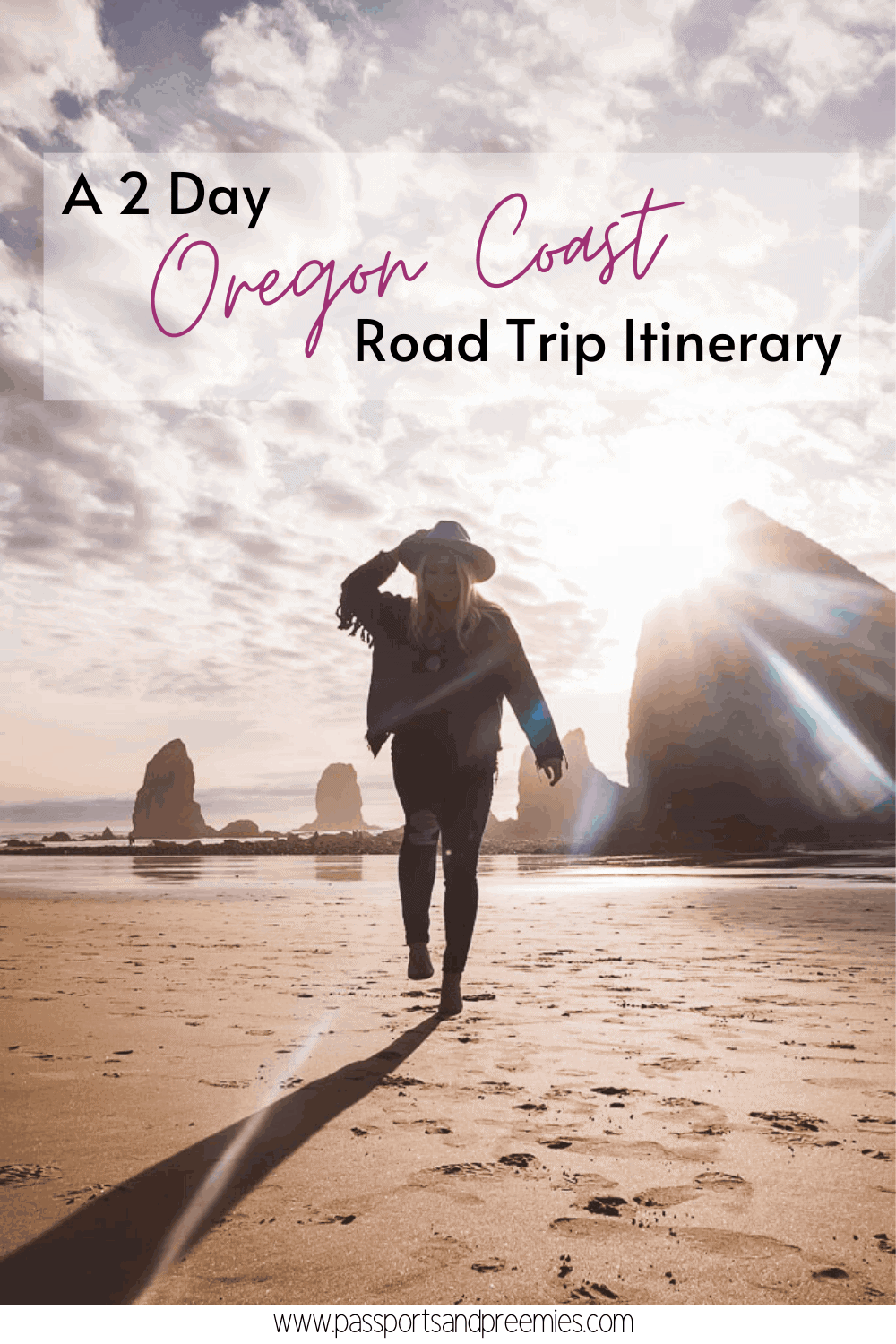