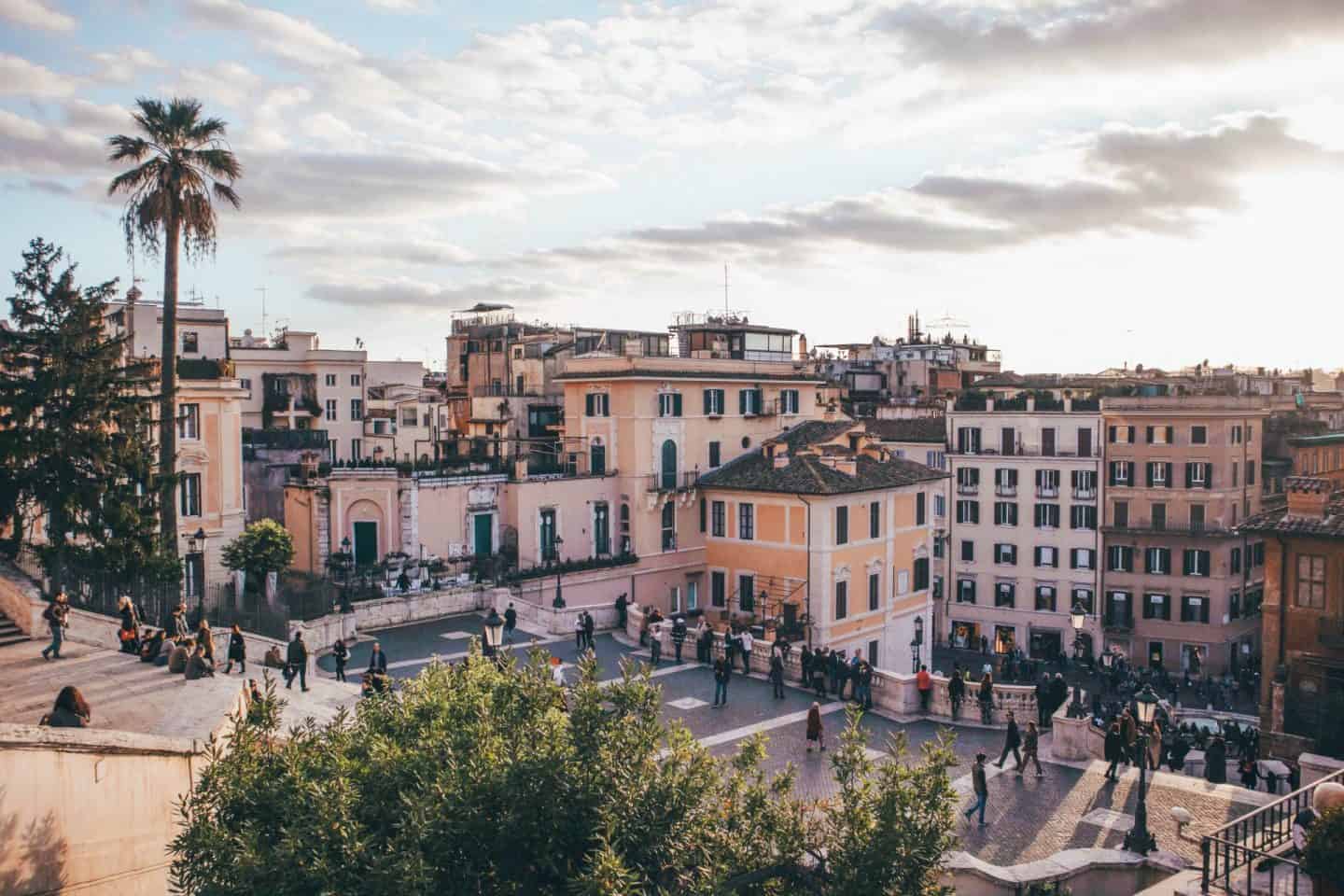 Rome.  A city filled with art, history, culture, and beauty at each turn.  Sadly enough, Rome is a city that I actively avoided when I first began traveling.  While I had heard incredible things about Rome, I chalked it up as “too touristy” and decided that I was much better off gallivanting around Eastern Europe and other less-traveled regions.  It wasn’t until a pizza craving struck that I traveled to Italy for the first time, and visiting Rome was simply unavoidable.  The moment I got off the train, I realized how wrong I had been about Rome.

As I gathered my belongings and stepped onto the platform, the smell of fresh-baked bread and olive oil immediately struck.  I observed people greeting each other with kisses – everyone seemed to be so happy and pleasant.  As I rolled my suitcase down the street to my hotel I passed historical site after historical site, in awe of the beauty of Rome.  I paused and watched little old ladies handmake pasta in the windows of restaurants.  And when I finally arrived at my hotel I realized that I had seen the best parts of Rome, without doing much.  I realized that Rome isn’t just an old city… Rome is an entire cultural experience, welcoming you to come visit and be apart of it.

So while leisurely strolling down the street, drinking wine, and watching people make homemade pasta is truly one of the highlights of Rome, there are also so many more incredible experiences to have.  Below are 10 things you can’t miss in Rome if you’re a first timer.

10 Things to See and Do in Rome Perhaps one of the most famous and recognized landmarks in the world, the Colosseum was built way back in 72 AD.  The building of this incredible site took eight years to complete and to date, the Colosseum is the biggest amphitheater ever built.  As you step inside the Colosseum, try to picture what it was like all that time ago.  Shoulder to shoulder crowds with people cheering on their opponents.  Blood, sweat, and tears as people and animals fought to their deaths.  The sheer adrenaline made its way through the crowds in waves, allowing fights to go on for weeks at a time.  At a time when travel wasn’t as easy and convenient as it is now, people traveled from all over the world to be a part of world history.  At one point in time, there were even 100 days straight of games played in the Colosseum.

If you’re into history even in the least bit, I would highly recommend taking a tour through the Colosseum (versus visiting alone).  This way a certified guide will be able to teach you about the history of Rome and the historical significance of the Colosseum.  Depending on which tour you take, you’ll also get a tour of Palatine Hill – one of the most ancient parts of the city and what is commonly referred to as “the first nucleus of the Roman Empire” – and the Roman Forum – an old marketplace.

However, be conscious of what tour company you decide to book with.  The cheaper option isn’t always the best as I learned the hard way in a scam when booking with “Colosseum Rome Tickets”.  Ultimately, I re-booked on a tour with The Roman Guy and had a wonderful experience. Pizza, pasta, gelato- OH MY!  What better way to experience Rome than through its food?  It’s truly one of the absolute highlights of Rome – getting lost in a really great bowl of pasta, a scoop of gelato, or a dish of pizza.  Ending with an incredible glass of Italian wine and wa-la; you have yourself an authentic Italian experience in the heart of Italy.

For a list of the best restaurants in Rome, don’t miss:  A Complete Guide to visiting Rome

3.  Immerse Yourself in Michelangelo’s Artwork at the Sistine Chapel Michelangelo is referred to by several people as the greatest artist of all time.  He was born and raised in Italy, where he became a well-known sculpture, painter, and architect.  One of Michelangelo’s most famous works was the painting of the ceiling of the Sistine Chapel.  Pope Julius II commissioned Michelangelo to paint a picture of the story of the Twelve Apostles.  However, it turned into so much more than that. Michelangelo convinced the Pope to let him paint of his own free will and he ended up telling the story of the Creation, Fall of Man, promise of Salvation through the prophets, and the genealogy of Christ.  This ornate painting took four years to complete and to date, it’s one of the most ornate and beautiful pieces in the history of art. Piazza Navona is a public space that was originally built for Romans to come to watch games, similar to what the Colosseum was used for.  The Piazza dates back to the first century AD and is still present today.   Now when you visit you can expect to see extravagant architecture, restaurants, and bars that line the square, and boutique shopping.  There are tons of quaint streets snaking out from this Piazza so it’s the perfect place to start if you want to get lost in the streets of Rome. Vatican City is considered to be a country, and it’s right in the heart of Rome.  It’s most famous for being the headquarters of the Roman Catholic Church and where the Pope lives.  There are approximately 1,000 residents who call Vatican City home, they have their currency and banking system, which makes them a fully functioning city-state outside of Rome and Italy.  Vatican City is also where you’ll find two of the most famous sites in the world, the Sistine Chapel and St Peter’s Basilica.

6.  Climb to the Top of St. Peter’s Basilica for Views of Rome St Peter’s Basilica is the largest church in the world and is located in Vatican City.  It’s a holy shrine amongst Catholics and is said to be where Saint Peter, one of Jesus’ apostles, is buried.  While entrance to get into the church is free, you’ll first have to pay the fee to enter Vatican City.  Plus, if you head to the top of the Basilica (which you should) there’s a fee for that too.

7.  Watch the Sunset From the Spanish Steps 135 steps, the Spanish Steps connect the Piazza di Spagna and Piazza Trinità dei Monti.  It’s a beautiful area to just lounge around and watch the sunset.  Please note, that to keep the steps clean, eating is not allowed on the steps.  With buildings painted in soft oranges and pinks, the sun illuminates the colors of Rome and lights Rome up just before nightfall.  Once the sun sets head to any of the numerous bars and restaurants around.

You might be wondering, why are they called the Spanish steps if they are in Italy?  It’s because they were named after the Spanish Embassy at Piazza di Spagna.

8.  Throw a Coin in the Trevi Fountain 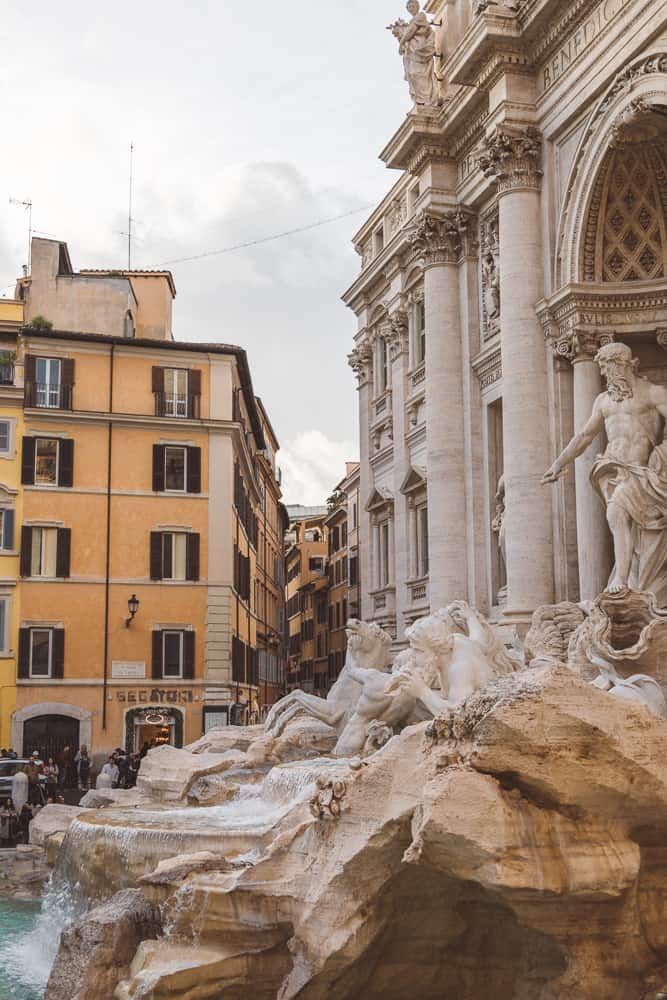 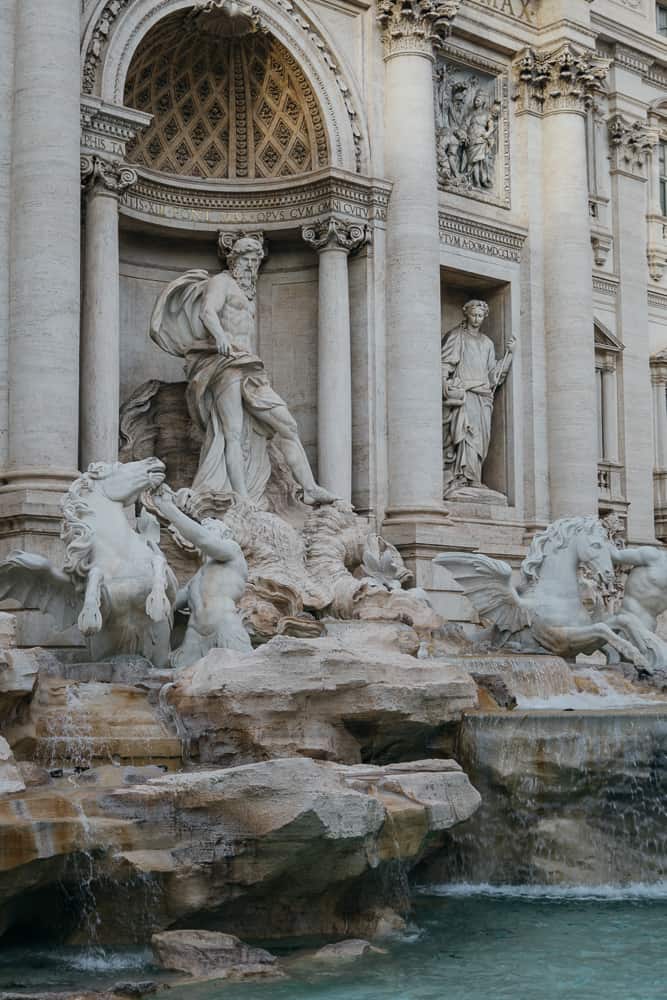 I first heard of the Trevi Fountain on The Lizzie McGuire Movie (anyone else?!) and instantly fell in love with the thought of throwing a coin in the fountain and turning around to meet the love of my life (who also happened to be a hot and famous popstar).  And while I came to Rome with hopes of falling in love, it happened in a way I wasn’t expecting.  As I threw my coins into the Trevi, I realized that I had fallen in love with Rome, the people, architecture, and food.  And although the Trevi is an incredibly touristy area, don’t miss the opportunity to see it anyways.

It’s estimated that €3,000 of coins are thrown into the fountain each day, and the money goes towards subsidizing a grocery store for Rome’s most in need population. 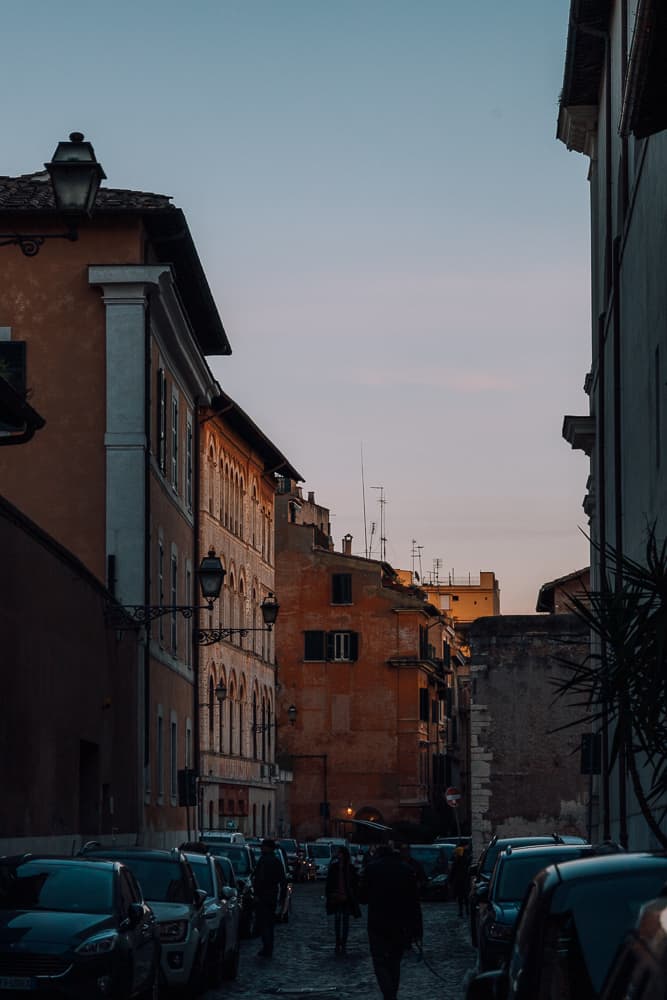 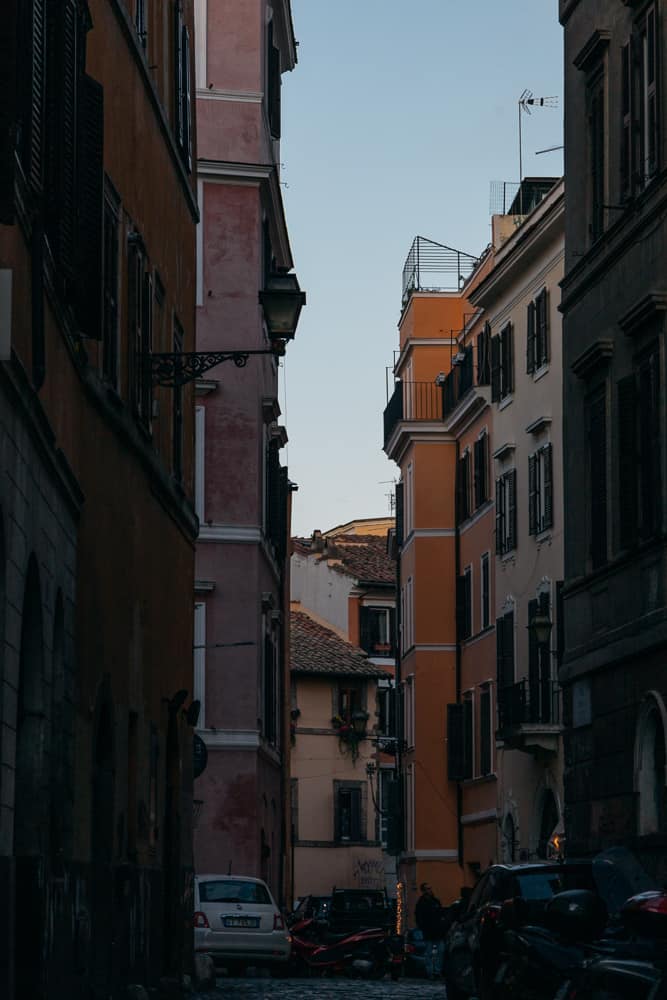 The Trastevere area is a trendy, hipster neighborhood in the heart of Rome.  It takes you a bit out of the crowds and tourist spots and allows you to enjoy the city at your leisure.  With tons of bars, restaurants, and shops you could spend all day in this hidden neighborhood.

10.  Stroll Down Via Margutta (One of Rome’s Most Beautiful Streets!) Via Margutta Street is a picturesque street in the heart of Rome in what is known as “the foreigner’s quarter”.  Near the Spanish Steps, I urge you to take a stroll down this street before heading to the Spanish Steps for sunset.  The street tends to be a bit more secluded than Rome’s busier streets, allowing you to stroll at your leisure and marvel at the colors, smells, and sights of Rome.

After spending three days in Rome, I realized that I was painstakingly mistaken about this incredible city.  A museum within itself, whether you’re visiting for one day, one week, or even longer, experiencing such a historic and cultural place is sure to change you.  With so many different experiences to have in Rome, you can choose to hit the tourist hot spots, go back in history, shop until you drop, or go with no plans at all.  I urge you to put down your phone, ask locals for recommendations, go where your heart is taking you, and get lost in the streets.  You’re guaranteed to fall in love with the city and see why it is that Rome is such a destination hot spot. 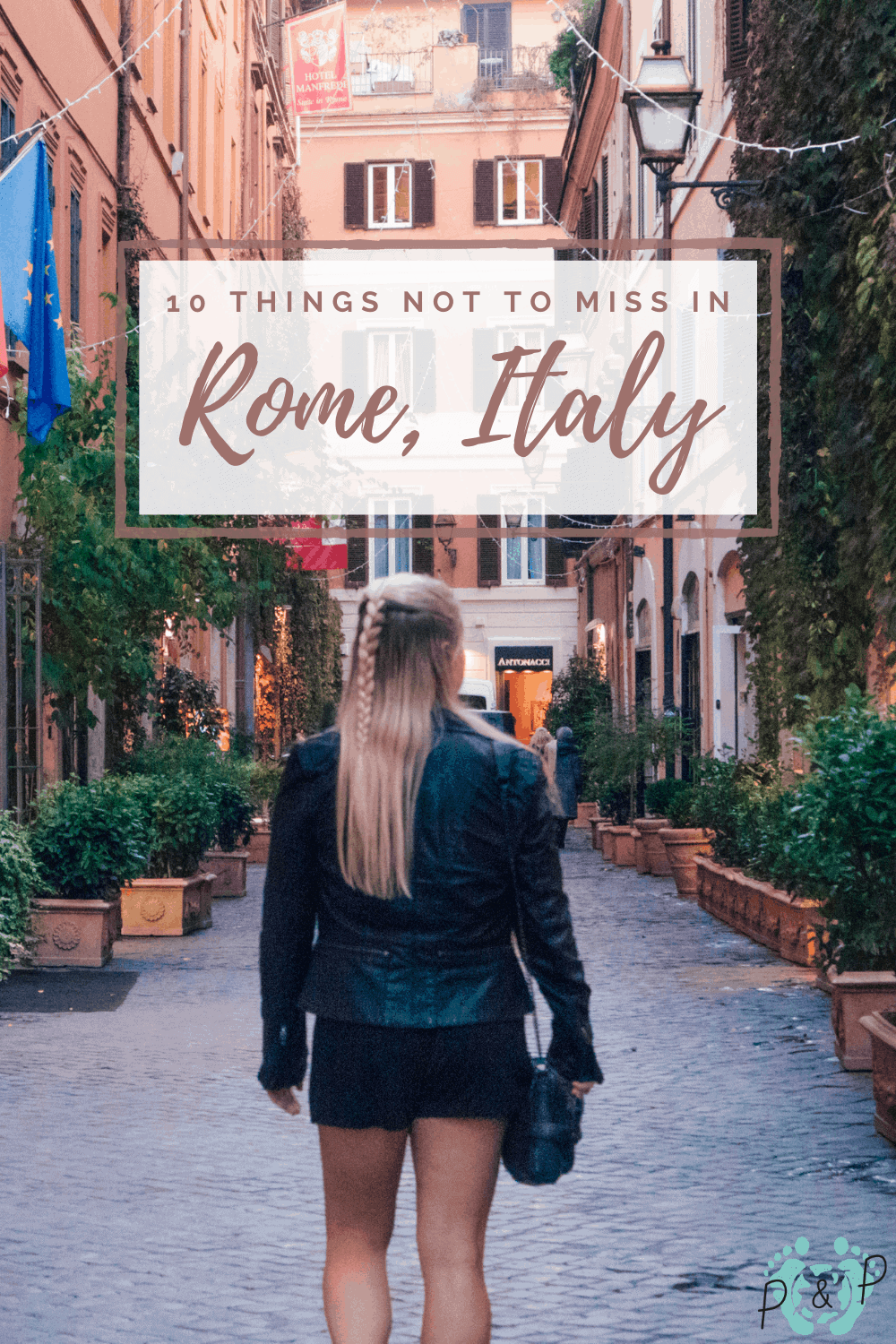 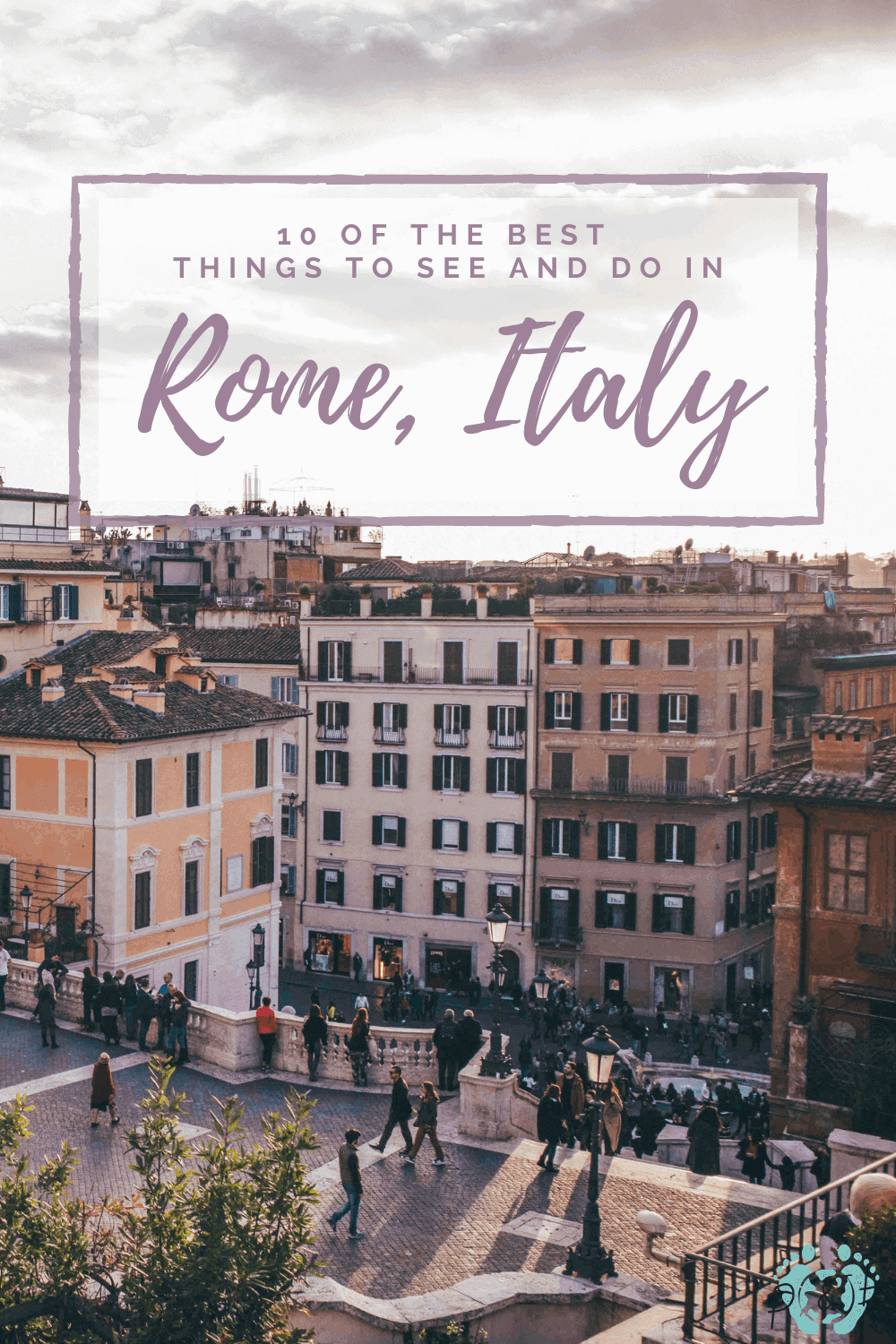