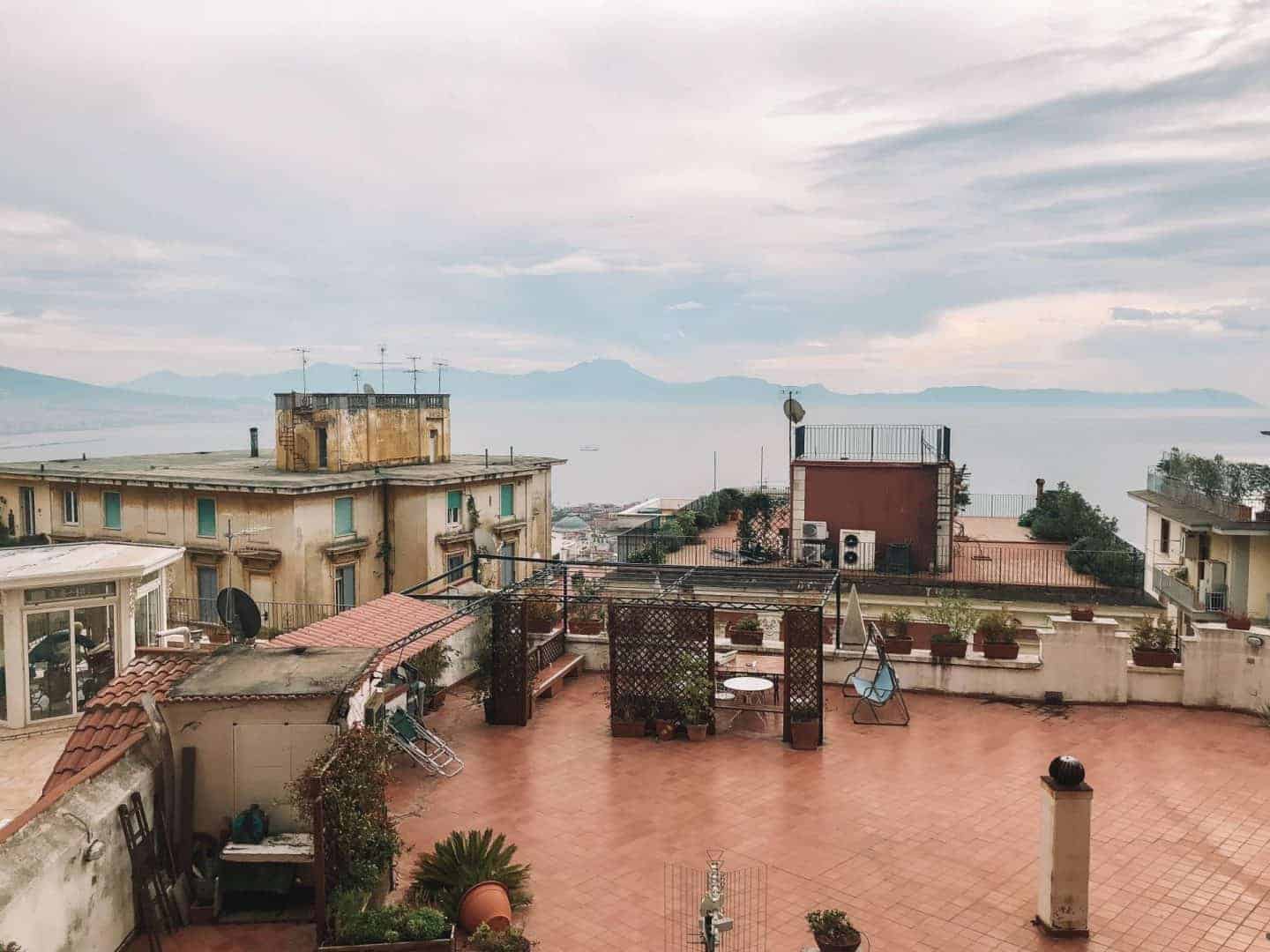 Drunk on life (and quite frankly vodka from one too many dirty martinis), I had an intense pizza craving.  And not for any old pizza you could get frozen or takeout.  Instead, I craved real, authentic, Italian pizza.  And that’s how I found myself in Italy for the first time, and how I ended up at Pizzeria Concettina ai Tre Santi.

I had been on an eight-week solo excursion through Europe when I decided to slow down and call Budapest home for a week.  It was the kind of trip that I planned last minute and the only thing I knew for sure was the exact amount of money in my bank account and how long I could continue to travel.  Because I was on a budget, I had planned on sticking to Eastern Europe, the cheaper countries, so that my dollar would go further.  However, my craving to dress up and paint the town red had lured me to the Four Seasons Hotel Gresham Palace and I found myself drinking much too expensive (for a single girl on a budget) vodka martinis and flirting with the cute bartenders.  As I knocked back my third martini (how was I already at three?!), my familiar feeling of needing greasy food struck and I found myself drooling over the thought of eating a piping hot slice of pizza – cheese sliding down my throat and grease staining my dress.  Realizing that Italy was “close” (at least as close as I had ever been), I drunkenly took out my phone, patiently waited as it connected to WiFi, and Googled, “pizza in Italy”.  I had discovered that the birthplace of pizza was Naples and in my drunken stupor I remembered that I knew someone, who knew someone, who lived in Naples.  It was good enough for me and I texted the poor guy proclaiming my love for pizza and stating that I was on my way… he didn’t have much say in the matter.  Moments later I had booked myself on a flight to Naples (from Vienna – an accident) that was set to leave in just two days’ time. 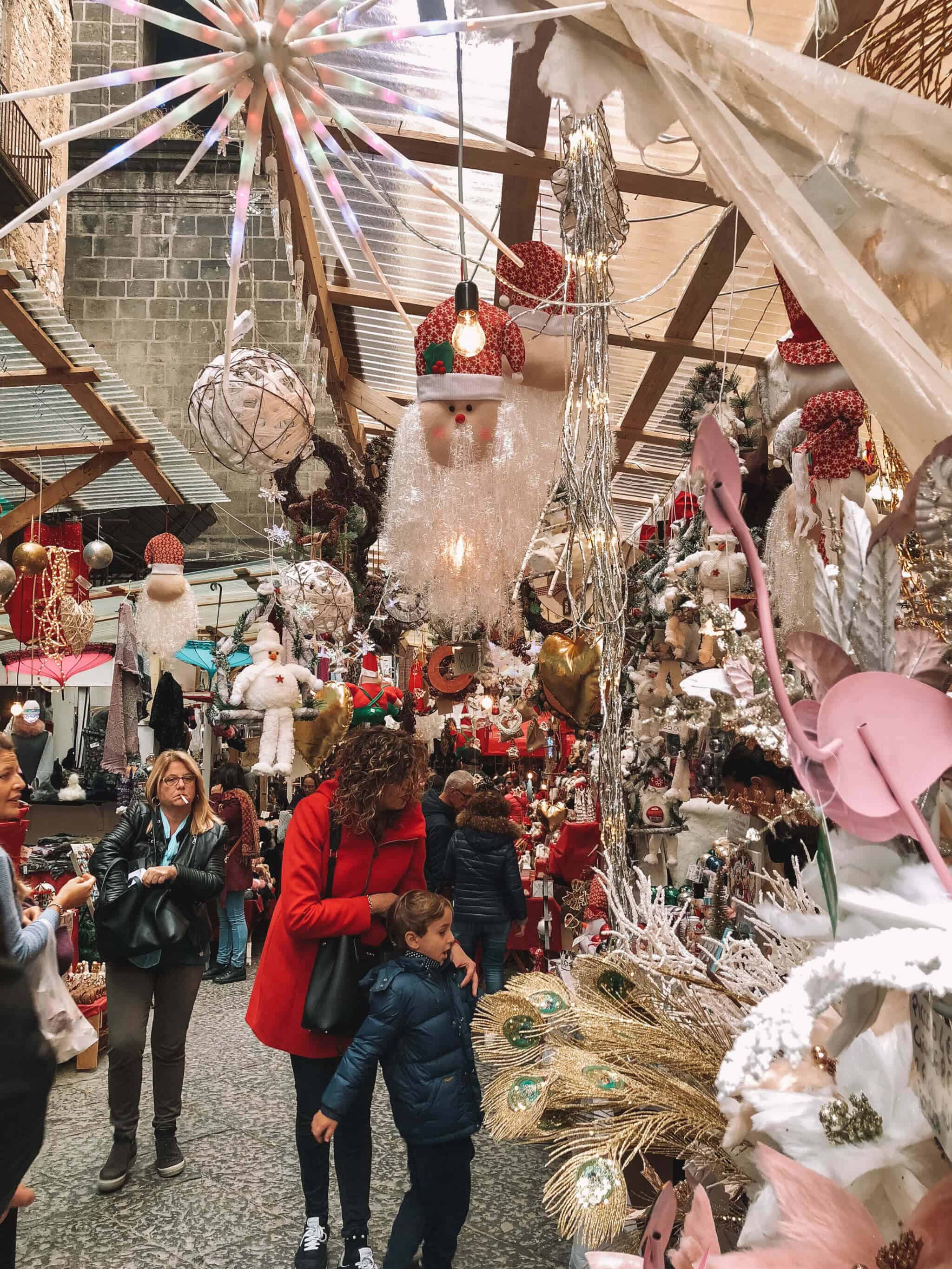 When I touched down on Italian soil for the first time in my life, tears brimmed at the corners of my eyes threatening to fall as I had realized the enormity of what I had done.  As a little girl who dreamed of traveling to far-off places instead of weddings and babies, Italy had always been my ultimate dream destination on my ever-growing bucket list.  While I had planned to save it for a “special” time, in my drunken stupor I realized that this was a special time.  I was on my first solo trip, falling in love with the world and myself and the experiences that shaped me along the way… now was the exact special time that I had been waiting for.

As I navigated the streets of Naples, I noticed a common occurrence.  Locals beamed from ear to ear, blew kisses to one another through the crowded streets, and enthusiastically greeted each other with warm hugs and cheeks touching.  The streets were crowded with vendors, tourists, and locals… mopeds weaved in and out of crowds leaving cars behind in their wake caught up in bustling streets.  It felt as though everyone was truly, genuinely happy to be in Naples and their passion and zest for life quickly rubbed off on me as I bounced down the street prepping for my first taste of authentic Italian pizza.

The Birth of Pizza in Naples 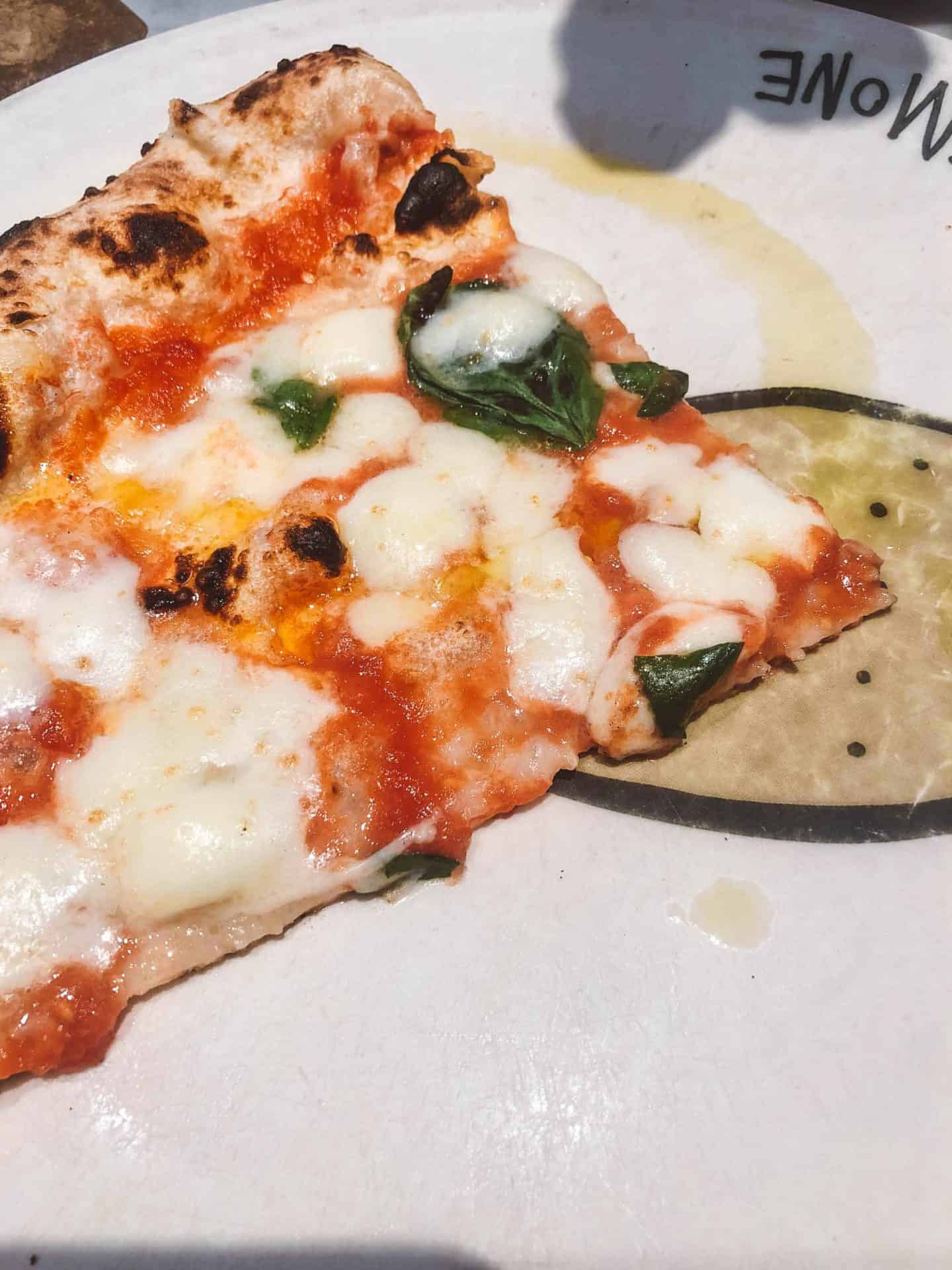 Naples is the birthplace of my beloved carby, cheesy, pizza.  In the 1700-1800s, Naples was a thriving waterfront city with an enormous population, the city was home to the working class and known for its “lazzaroni” or its “working poor”.  The people of Naples needed cheap food that they could eat quickly, and that’s is how modern-day pizza was created.  It wasn’t until 1889 when King Umberto I and Queen Margherita of France visited Naples and requested an assortment of pizzas to eat.  It’s said that the Queen most enjoyed what is now the modern-day Margherita pizza and their visit is what subsequently began the whole Italy-wide pizza craze. 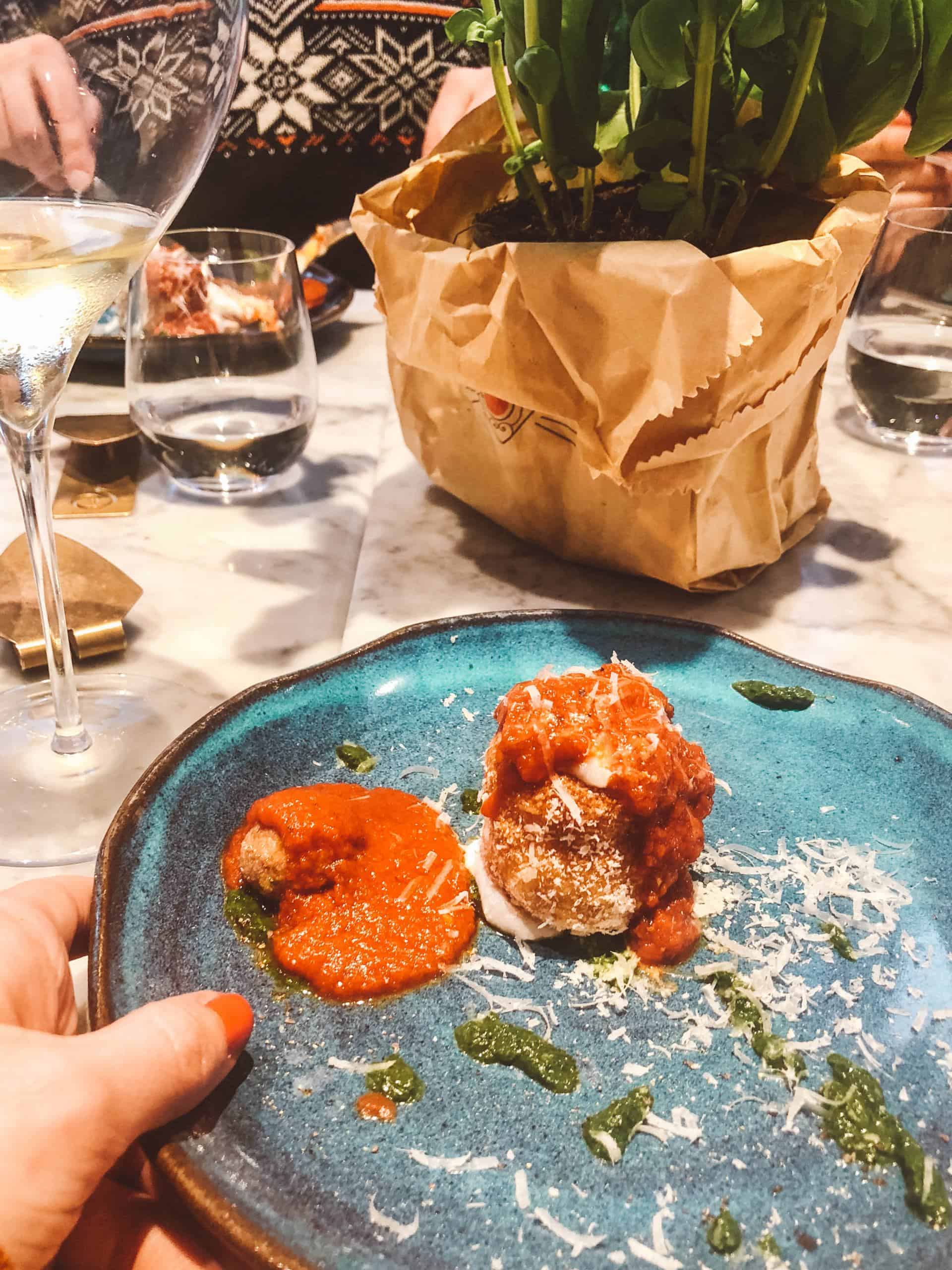 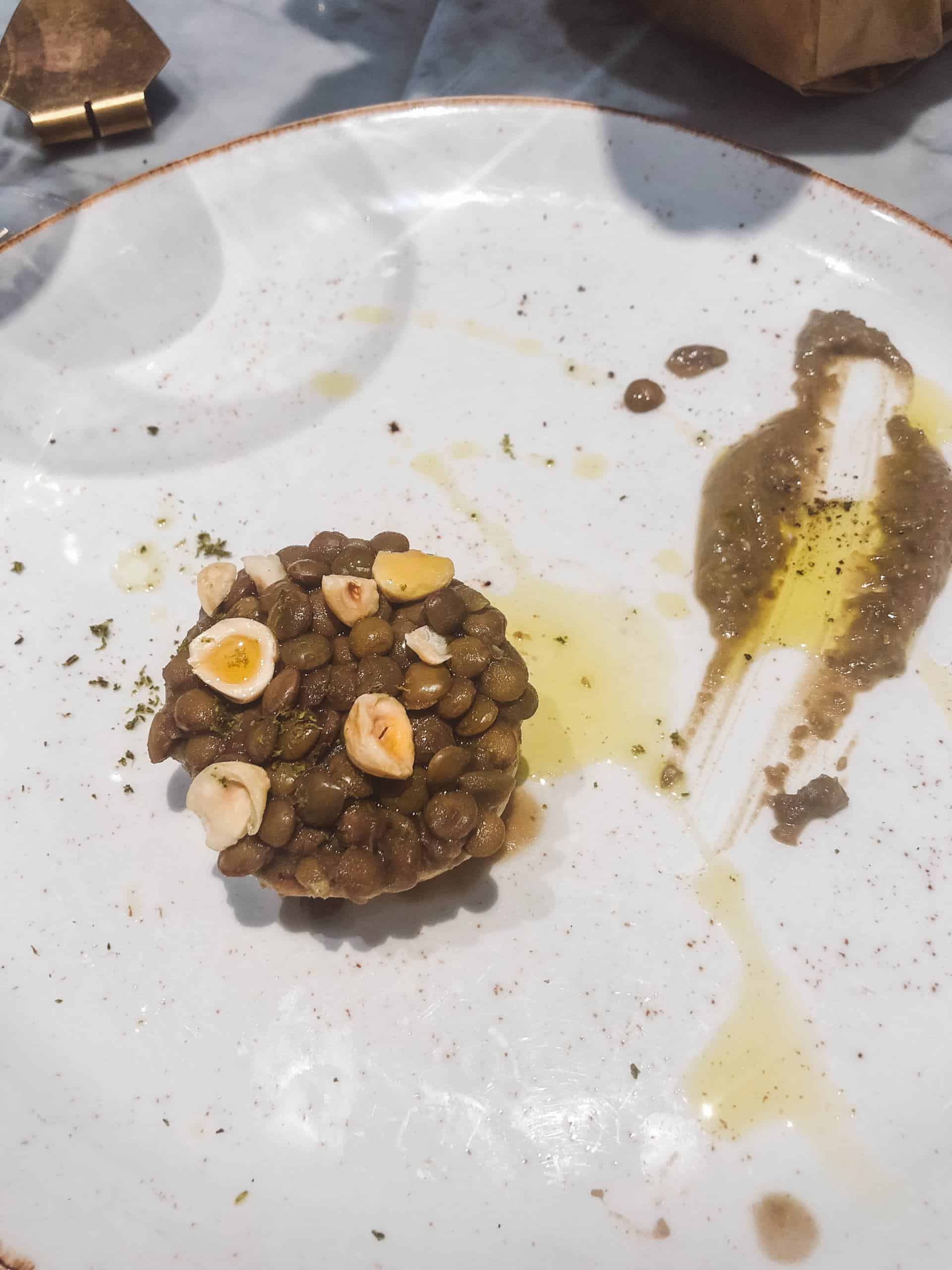 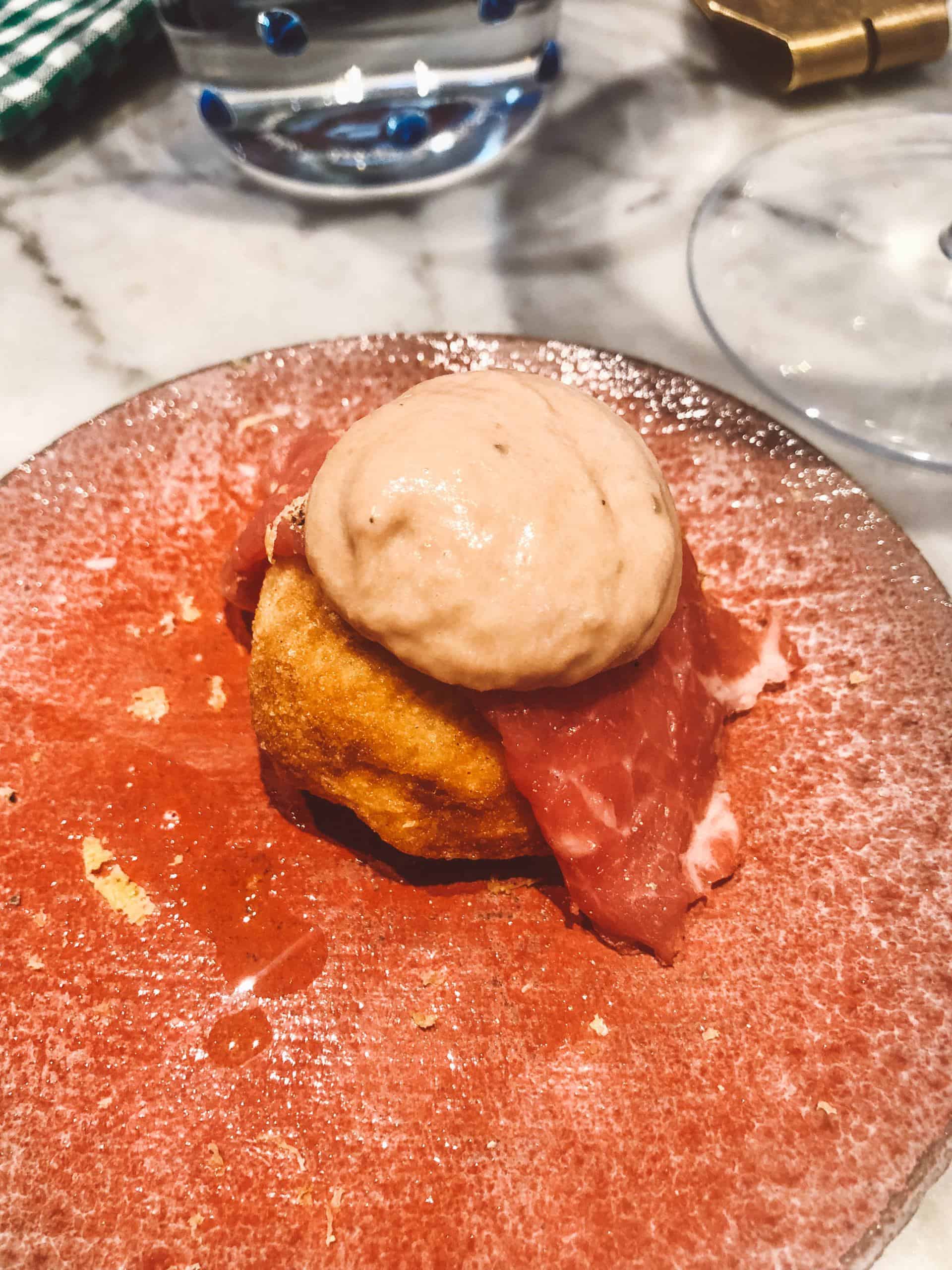 Upon arrival to Pizzeria Concettina ai Tre Santi, the smell of fresh-baked dough and garlicky herbs hit my nose.  I stood there, soaking in the moment, relishing what was to come.  For a small pizza restaurant with such a large reputation, naturally, there was already a line of people waiting for their turn to go in and experience eating pizza in the birthplace of pizza.  The owner of the restaurant never skipped a beat as he regularly came outside and teased us with what to expect inside.  He showed off his most famous dishes and each time he walked by I contemplated taking the dish and running, wondering what kind of trouble I’d be in and how bad it would be to spend the night in an Italian jail cell.

As our turn came to enter the restaurant, I looked around at the group of boys I was with, a group who I barely knew an hour ago, and was happy to have found such people that were equally as stoked about this pizza experience as I was.  And while I thought we came for a slice or two of pizza, what ensued was bigger and better than my wildest dreams.

Immediately I caught on to the beat of the restaurant.  Waiters and waitresses whizzing by in an attempt to squander empty stomachs and empty wine glasses.  Live music that would stop people in their tracks, putting their forks down and clapping along to the beat of the music.  I realized that in Italy, at Concettina ai Tre Santi, the clock slowed down, and the restaurant operated on its own time schedule regardless of the long line of people outside.  Not a moment too late, the owner of the restaurant happened to stop by and someone at the table had the brilliant idea to say, “We want it all.  Bring your best food and wine”.  And thus, a 10-course, 5-hour meal ensued. 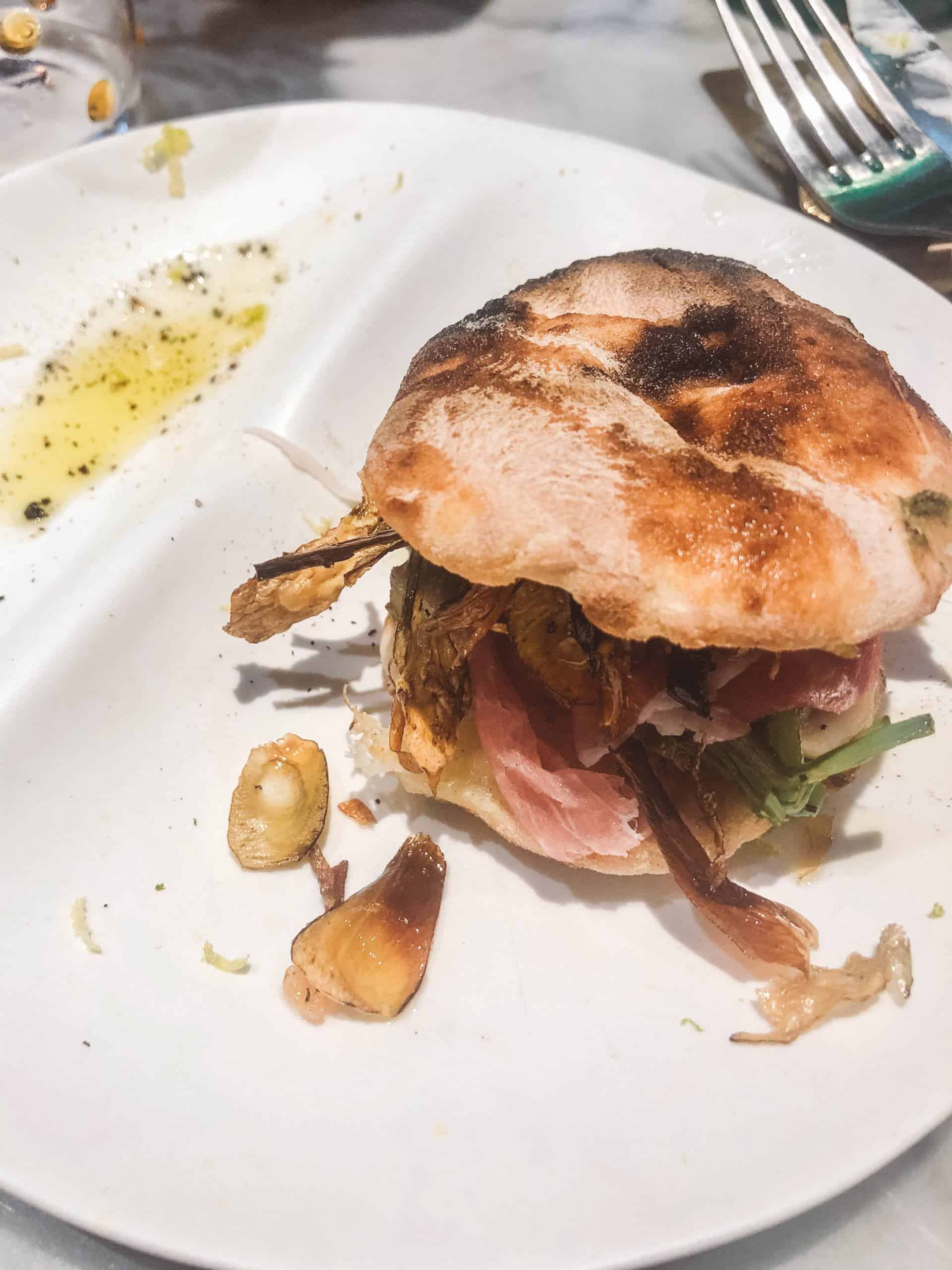 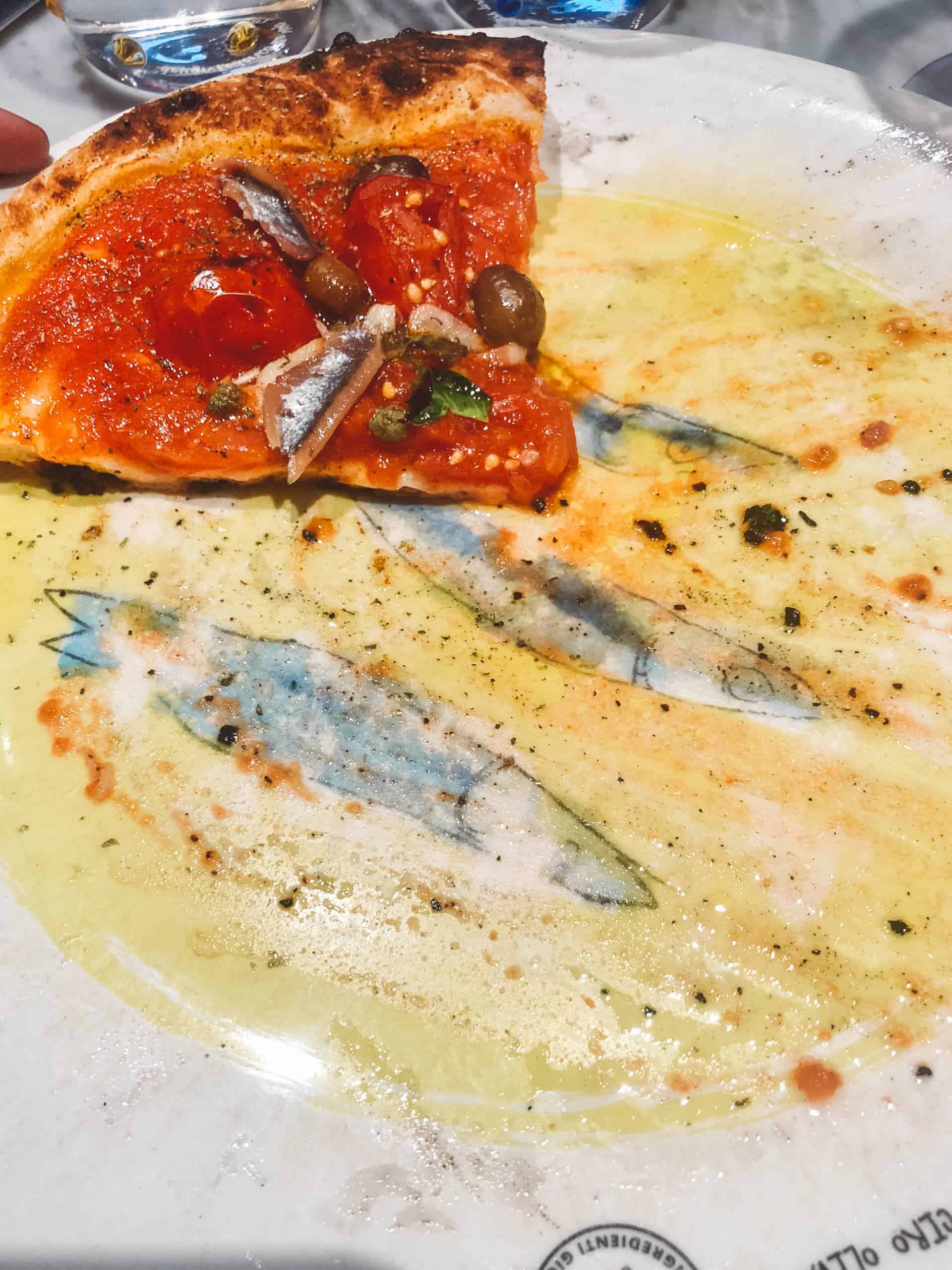 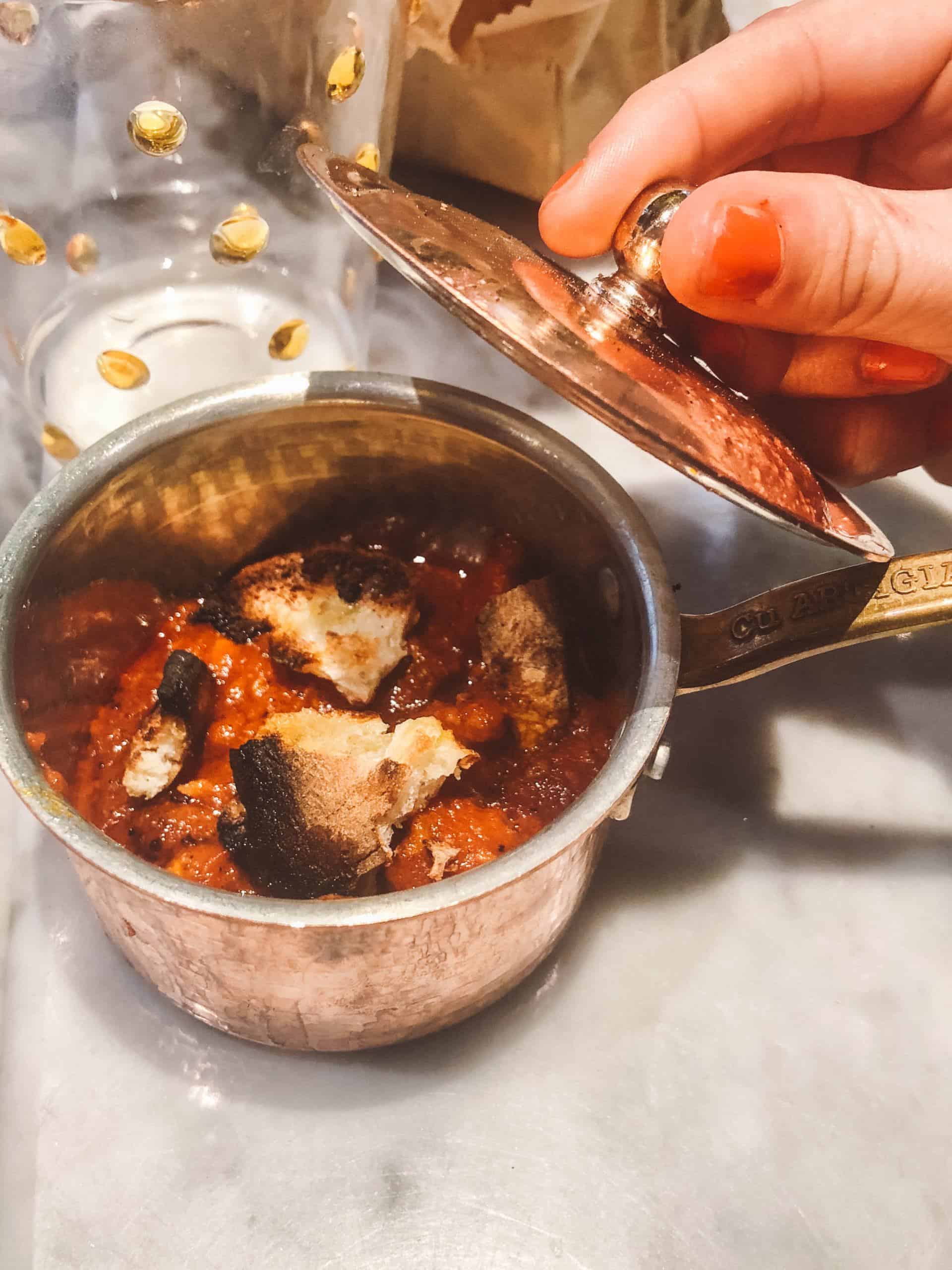 It only seemed as though I had blinked and before I knew it very expensive (I know it was expensive because I contributed to the final bill) wine and bubbles were served.  I noticed a bottle of Cristal casually sitting on the table and thought to myself, prepare… if you thought drinking martinis in Budapest was expensive, this is sure to break the bank.  So I poured a glass, downed it in a few seconds, and shook my money feelings away.  I was in Italy for crying out loud.

The first dish that we were served was the famed Margherita pizza.  As I enjoyed my slice I wondered if this is how it felt to be Queen Margherita, discovering something so delicate but so delicious, wanting to scream about it aloud from the rooftops.  But I had no time to do that as our second course had arrived – stuffed meatballs.

To my utter disbelief, each course became richer… more divine.  Lentils, ragu, fried pasta, tuna sandwiches, more pizza.  The fuller I became the harder it was to stop.

By the time the 10th course was served, my pants were already unbuttoned and 10+ wine bottles littered the table.  Thinking that I was about to take my last bite, the owner of the restaurant stopped by and ushered our group outside into a cellar.  He said that he could feel the enjoyment we had while eating and wanted to share a little bit more of the restaurant.  Turns out he had led us to a wine cellar, poured us each a $50 glass of rum, and we cheered to new friends, incredible experiences, and enjoying life the way that Italians do.  As though every fleeting moment is a precious gift not take for granted.

Now that I’m back from my solo trip, on American soil, I can say that that meal single-handedly changed my life.  Not only did it teach me to appreciate spontaneity and that the best decisions can come out of a drunken stupor, but it taught me so much about Italian culture.  It taught me that the true beauty of Italy isn’t found on Instagram, replicated in art museums, or elsewhere.  The true beauty of Italy is in the small moments.  It’s the beauty in an incredible bowl of pasta, a scoop of gelato, a plate of pizza.  It’s the company that you’ve surrounded yourself with and have decided to share a moment of time with.  Italy taught me the importance of slowing down, taking your time, closing your eyes and breathing in the scents hearing people speak, and feeling the sunshine on your face.  The true experience of Italy is right in front of you – even if you aren’t in Italy.  So next time you’re in a moment that feels mundane, put your phone down and choose to find the beauty in any little old thing.  And for the love of Italy… enjoy, taste, and experience the meal that is placed right in front of you.

Naples was quintessentially Italy… it was everything that I had hoped and dreamed that it would be.  And dining at Pizzeria Concettina Ai Tre Santi was just the icing on the cake.

For more adventures in Italy, don’t miss these posts:

10 Things to See and Do in Rome

Visiting Florence in One Day

Photos to Inspire You to Visit Verona 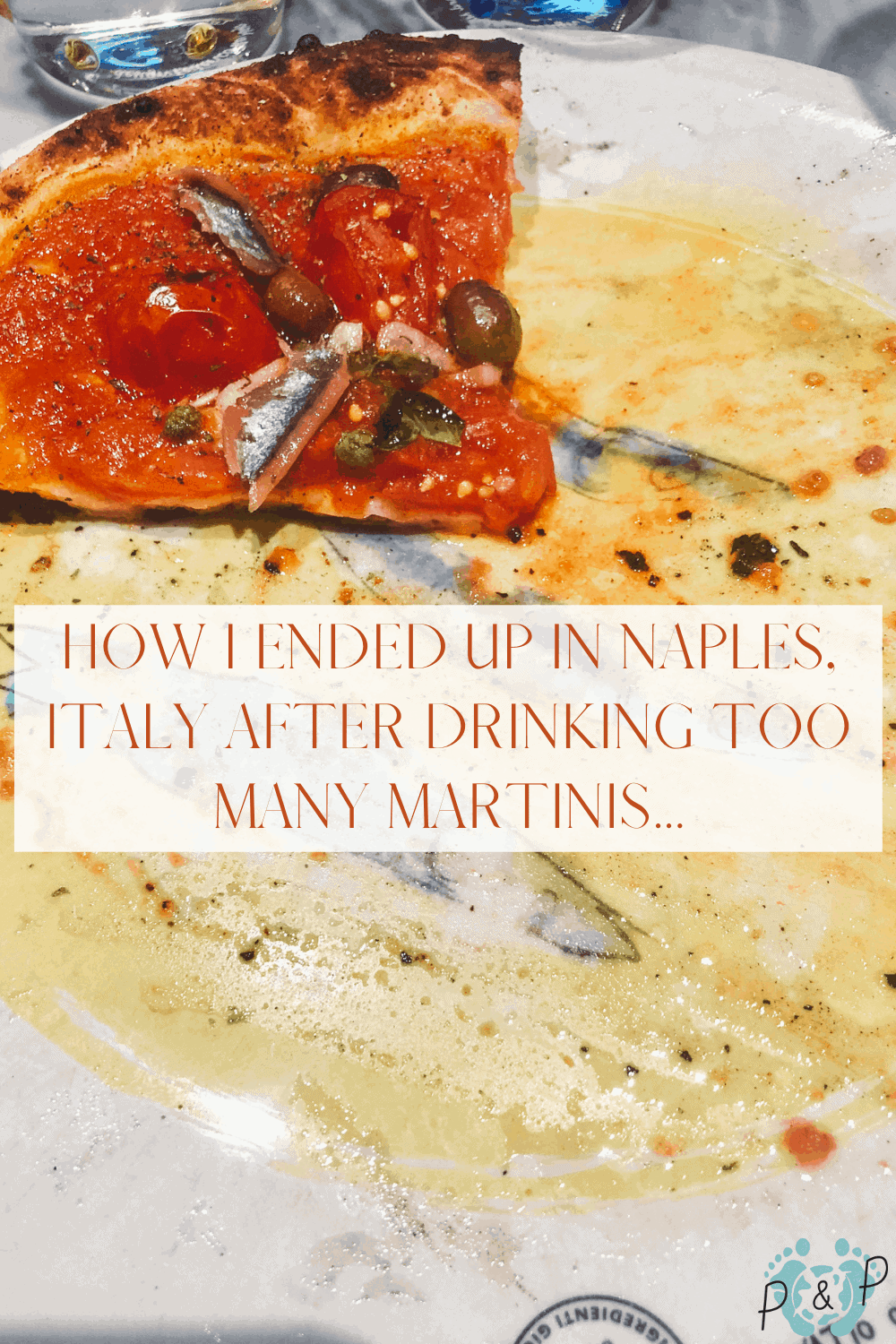 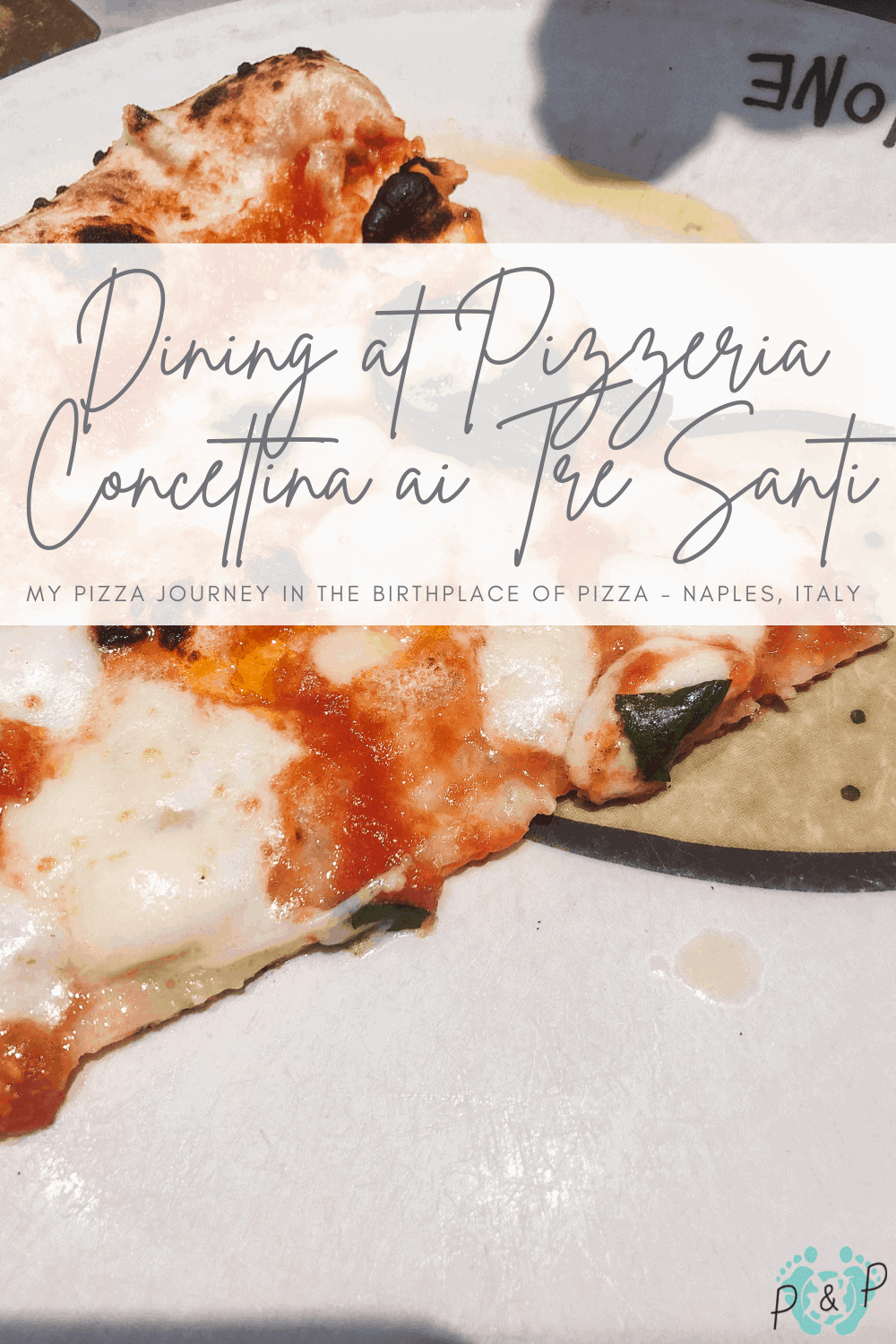 END_OF_DOCUMENT_TOKEN_TO_BE_REPLACED

A Guide to Visiting Tinos, Greece

10 of the Best Things to Do in Cabo