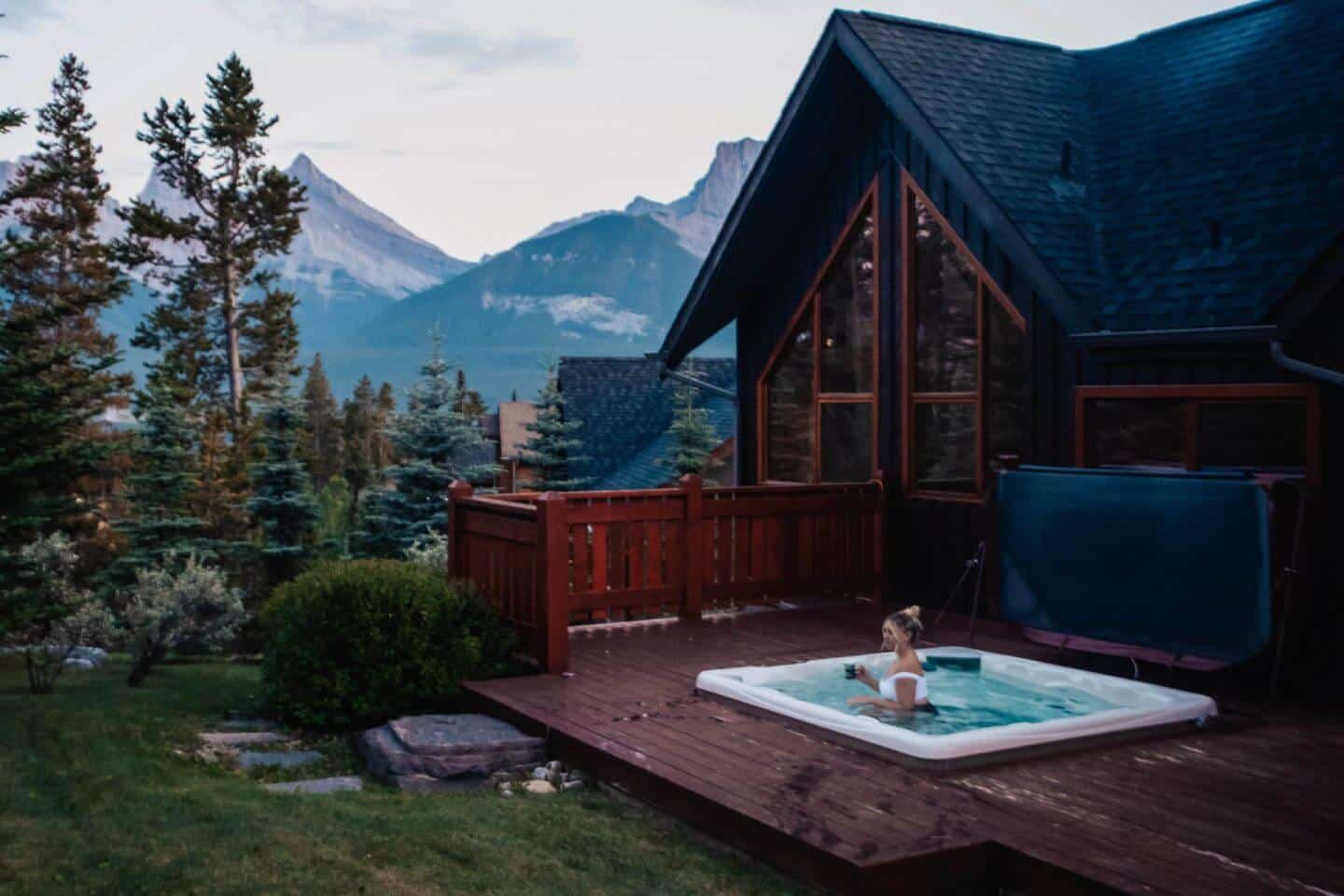 Canada is made up of 10 provinces and three territories all offering something unique from the next.  To the east, you’ll find Ontario, which houses Toronto; the biggest city in Canada.  And Quebec, the mostly French-speaking province which happens to be the biggest in the country.  To the west, Alberta!  A nature lovers dream.  Housing the oldest park in Canada – Banff National Park, Alberta is full of ice blue glacial-fed lakes, rocky mountains as far as the eye can see, and wildlife galore.  And British Columbia which happens to be made up of tiny little islands, wine lands, and where you’ll find Whistler – a winter lovers dream, boasting one of the biggest and best ski resorts in North America.  You see, you could spend weeks exploring the vast country of Canada.  Getting a taste of what each coast offers as you slowly and lazily move from one province to the next.  However, on this eight-day Canadian vacation, we’ll be sticking to the west coast, specifically Alberta and British Columbia.  Two uniquely beautiful provinces, each offering something different for a taste of nature plus city vacation. 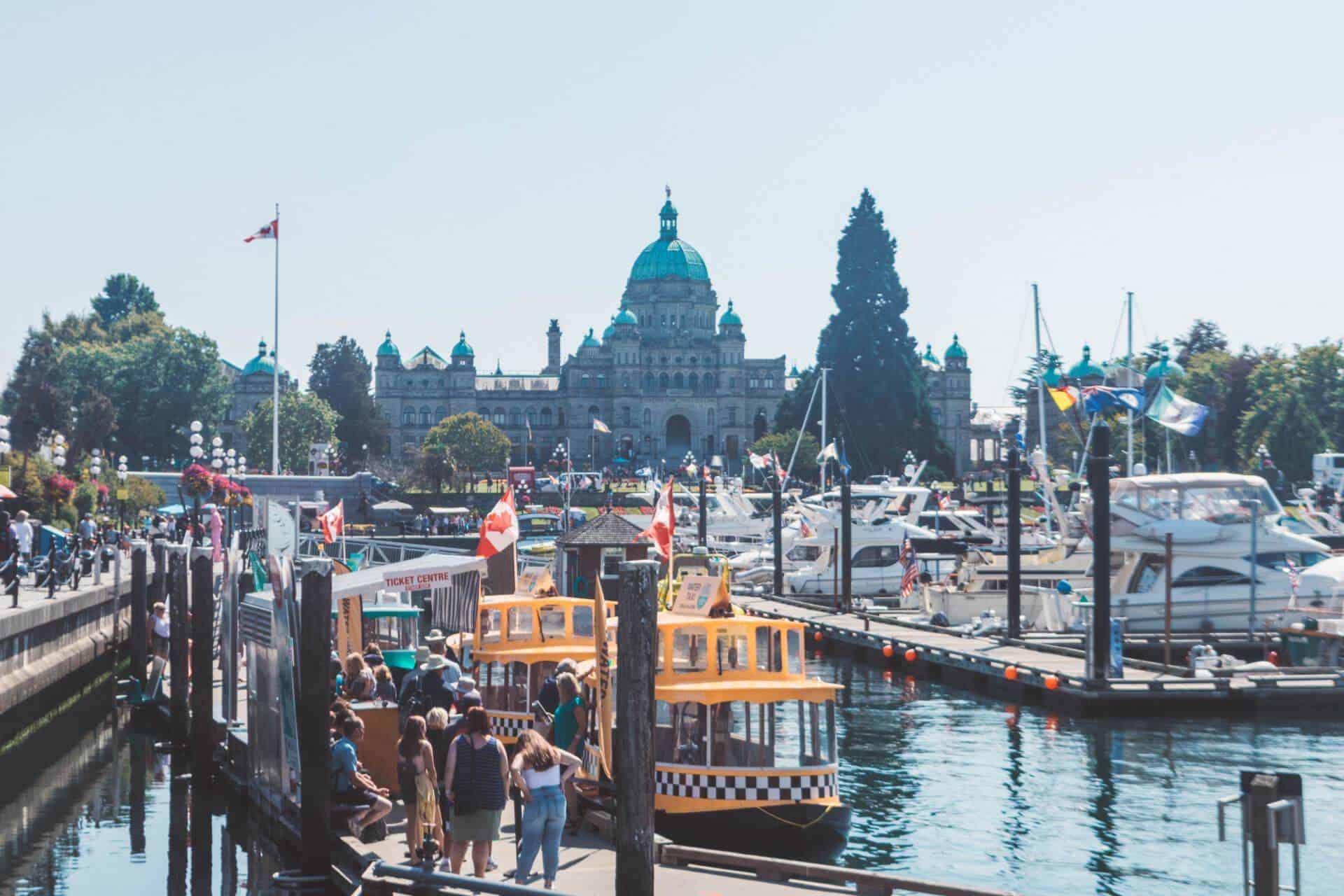 Both strikingly different, yet similar; Alberta and British Columbia are unique in their own ways.  Of all of the Canada vacations to take, on this trip, in particular, we’ll be exploring the beautiful outdoors of Alberta.  Venturing to Banff National Park, Jasper, and so on until you’re feet have had about all they can take.  From their fly to the scenic Vancouver Island located in British Columbia for rest and relaxation.  Explore Victoria, learn about the history of the island, and maybe even venture up north to the vineyards.  While there are many places to visit in Canada, these eight days will focus on these two provinces.

WEDNESDAY – Depart from the USA, Arrive in Calgary, Alberta

Leave Wednesday to travel to Canada for an expected arrival into Alberta on Wednesday.  The airport that services Alberta is Calgary (YCC), located south.  While you can choose to stay in Calgary I’d opt to head north to stay in Canmore or Banff.  Either way, I’d highly recommend renting a car to explore the beauty of Banff at your own leisure.  Luckily car rental from the airport is seamless!  You can find the car rental center on the departures level across the street from the domestic terminal.  The on-property rentals include Avis, Budget, Dollar, Thrifty, Enterprise, Hertz, National, and Alamo.  I have personally used both Avis and Enterprise in the past and have had great experiences with both companies.

When booking flights I prefer to use Kayak to compare prices.

Ready to book?  For hotel options compare rates at TripAdvisor or Booking.com.  If you prefer an Airbnb, use my referral code for a $55 credit (first-time users only). 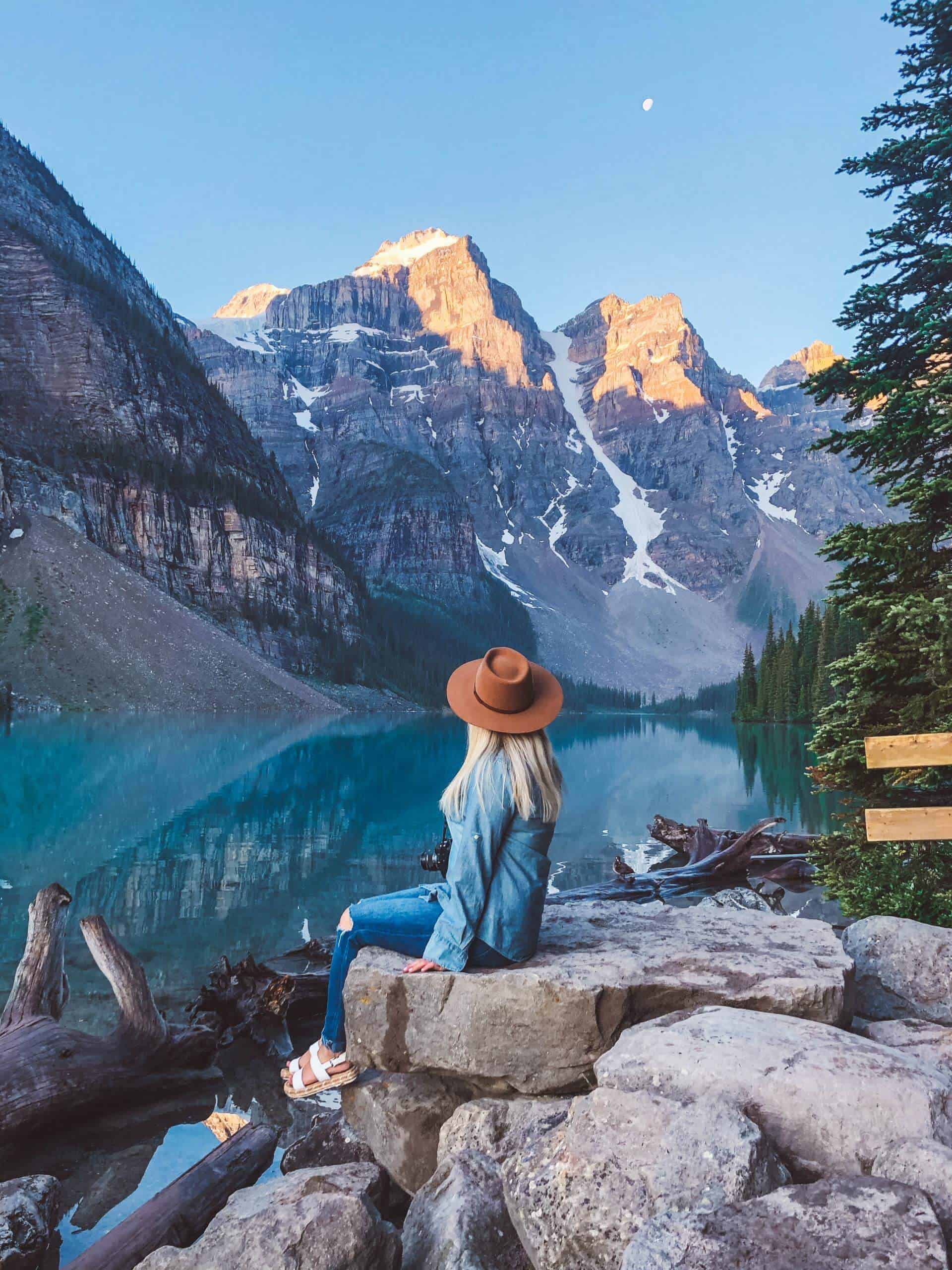 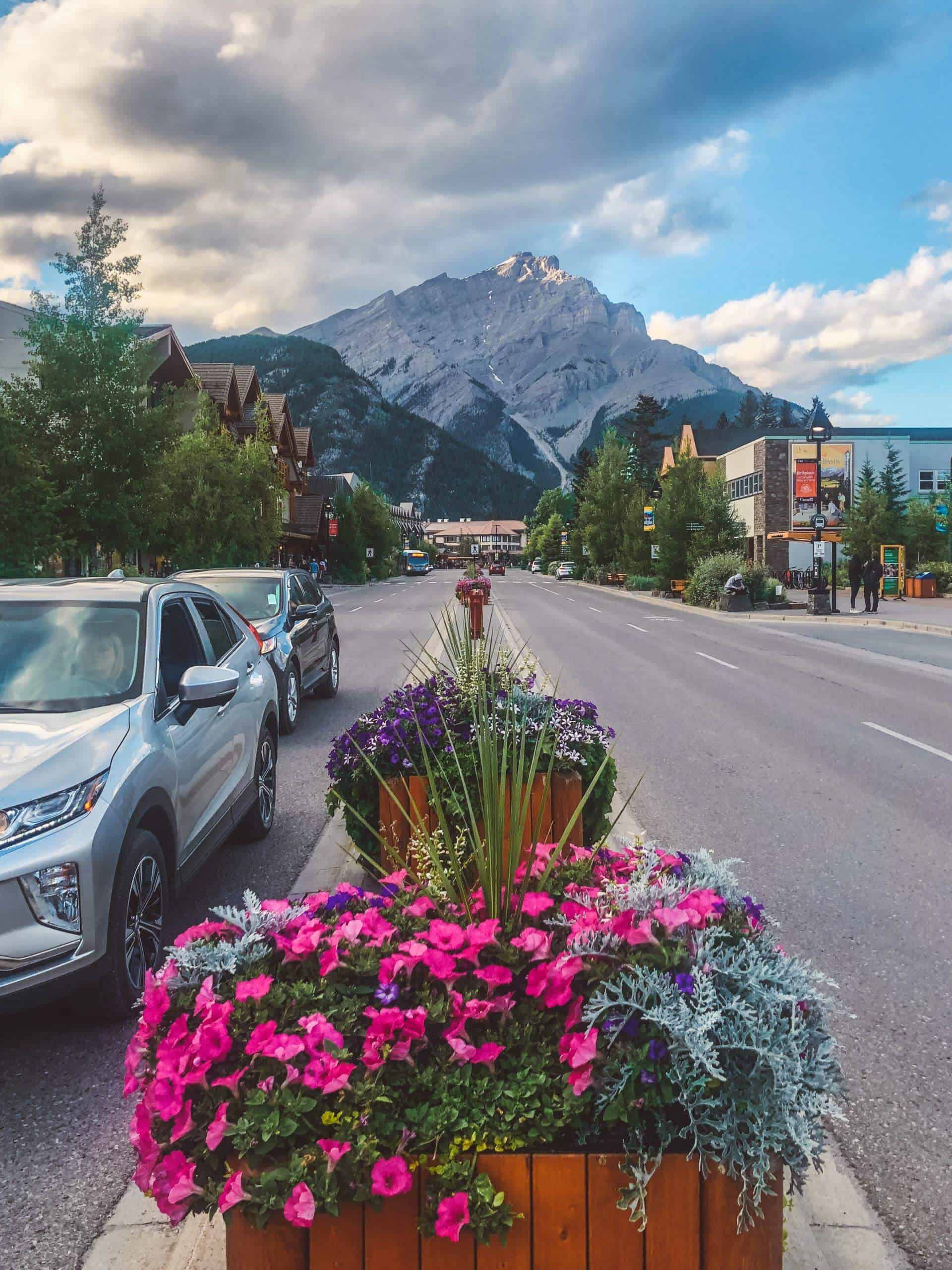 Get started early by heading to see the sunrise over Moraine Lake.  The parking lot fills up early and parking is limited so keep that in mind as you set out.  (For details on this check out The Nitty Gritty Details of Visiting the Most Popular Banff Lakes).  It’s no secret why Moraine is wildly popular.  What lies in front of you is an icy blue lake with the Canadian Rockies jutting up in the background.  As the sun rises higher, the water only turns bluer; a sight I could hardly believe with my own two eyes.  Here you’ll be able to take photos, rent canoes, or hike.  Depending on your level of athletic ability, recommended hikes include Sentinel Pass via Larch Valley Trail, Eiffel Lake Trail, or for a lookout point the Moraine Lake Rockpile Trail.  For details on each hike check out AllTrails.

After spending the day at Moraine Lake, head down the mountain to downtown Banff to see what this small mountain town has to offer.  Downtown Banff sees upwards of 3M visitors in the summer months making it crowded and touristy, however, it’s not to be missed.  You’ll find friendly locals eager to give recommendations, Canadian goods sold in shops lining the streets, and local restaurants celebrating Canadian cuisine.  Recommendations for downtown Banff include Block Kitchen + Bar (dinner), Cabin108 (shopping), Tooloulou’s (breakfast), Magpie & Stump Restaurant (rooftop margaritas and appetizers), BeaverTails (dessert), and Rose & Crown (patio for sweeping views of the Rockies). 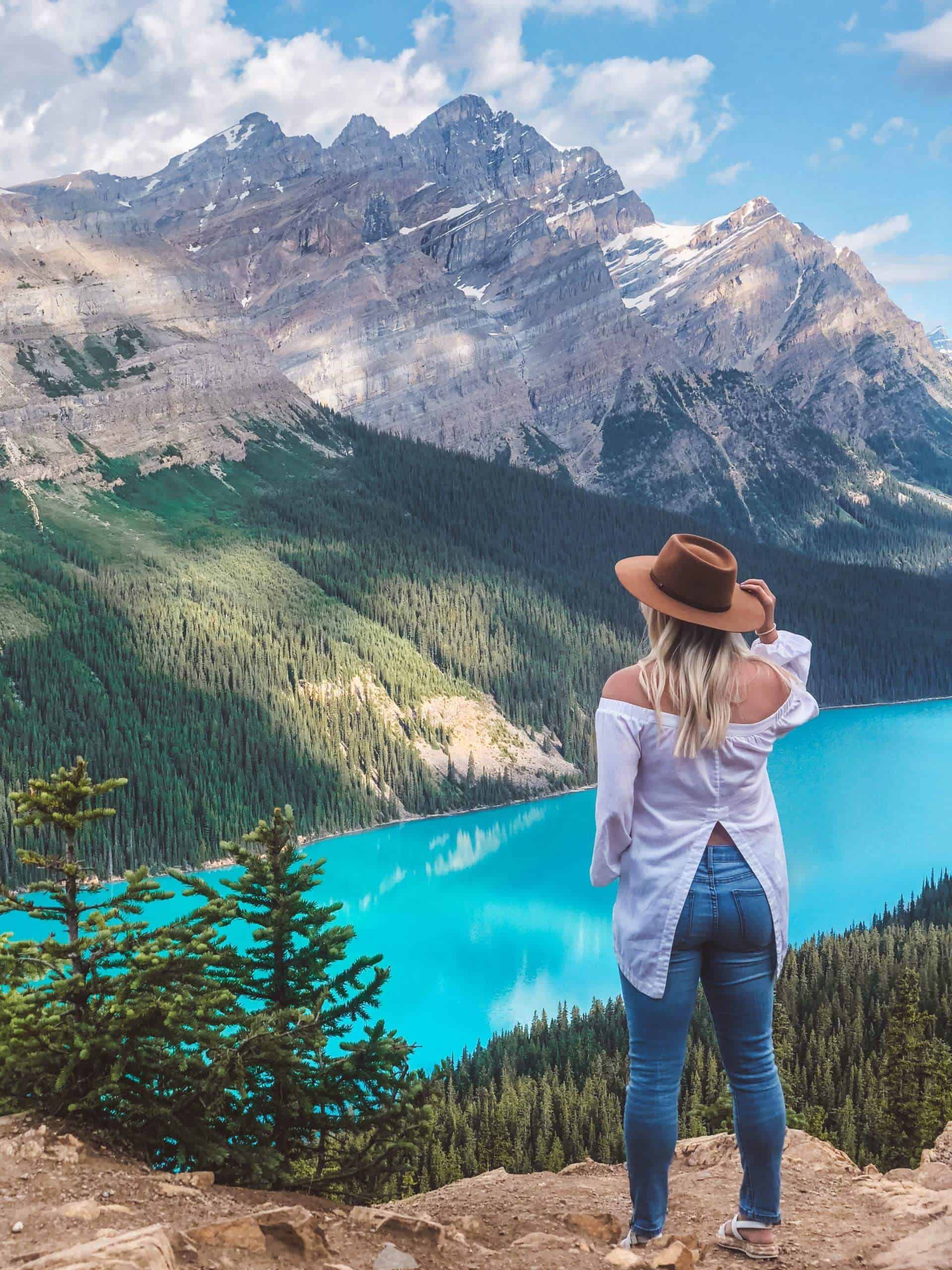 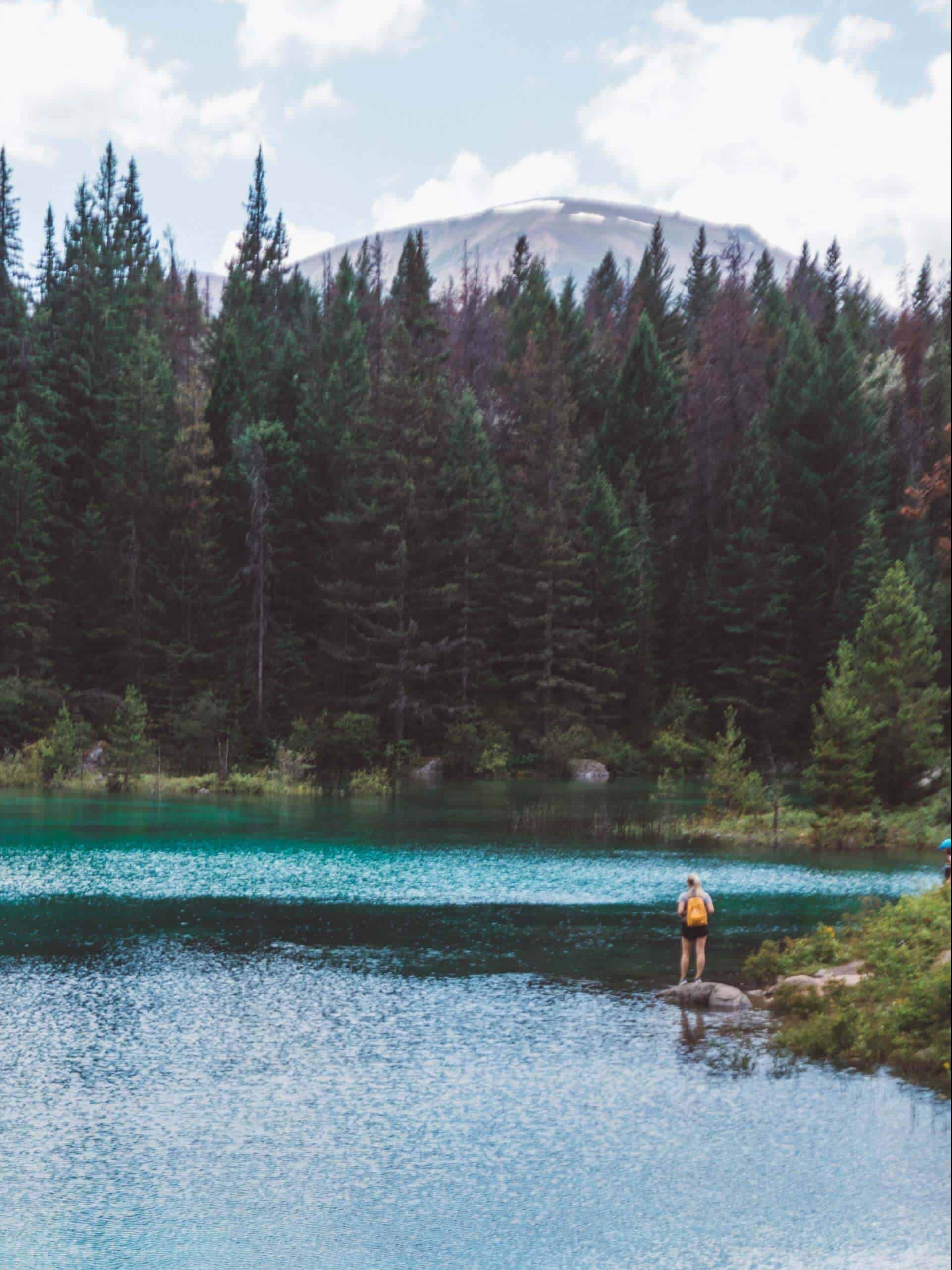 Day two of your Canada trip discover what there is outside of the wildly popular Banff National Park.  North of Banff, lies Jasper National Park where you can hike, chase waterfalls, glacier walk, and more.  Depending on where you’re located in Alberta, Jasper may be far… but the drive is worth it.  Driving along the Icefields Parkway, time will fly by.  Stunning views at every turn of the road, wildlife found alongside the highway and the Rockies in the backdrop.  Even if you don’t make it all the way to Jasper, I’d highly recommend driving along part of this highway for the views alone.

If you’re driving from Canmore or Banff to Jasper, the first place to get out and stretch your legs should be Peyto Lake.  While you can’t access the lake, there’s a lookout point a ten-minute walk from the parking lot.  Close enough to appreciate, yet far enough away not to spoil it, this aqua lake and the serene landscape is truly one of the best views in Banff.

If you choose to go onwards to Jasper National Park there are tons of things to do.  For scenery, head to the Columbia Icefield Skywalk.  For hiking opt for the moderately easy but stunning Valley of the Five Lakes.  Or for a change of pace in a different mountain town head to downtown Jasper for food and beer at Jasper Brewing Company. 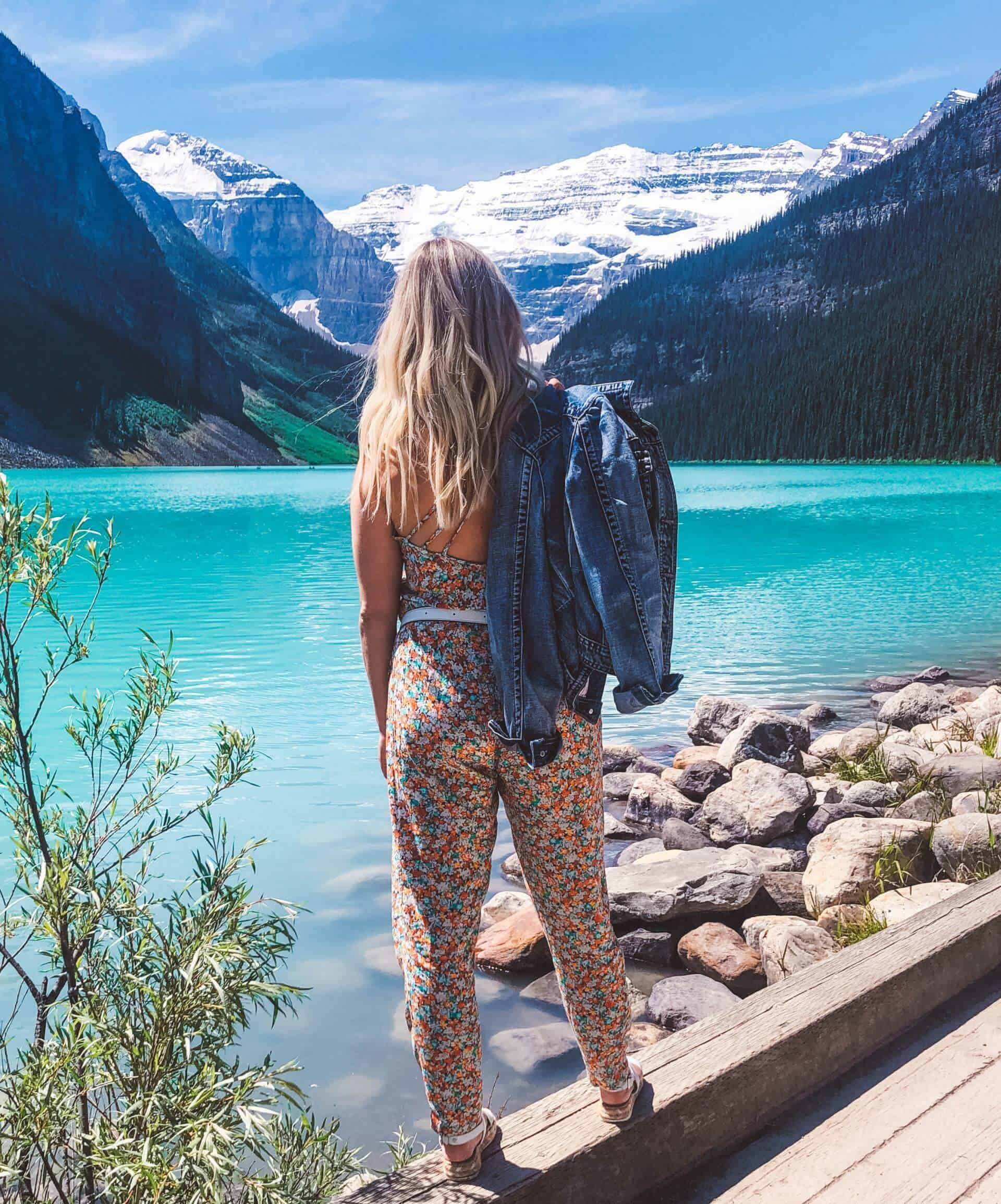 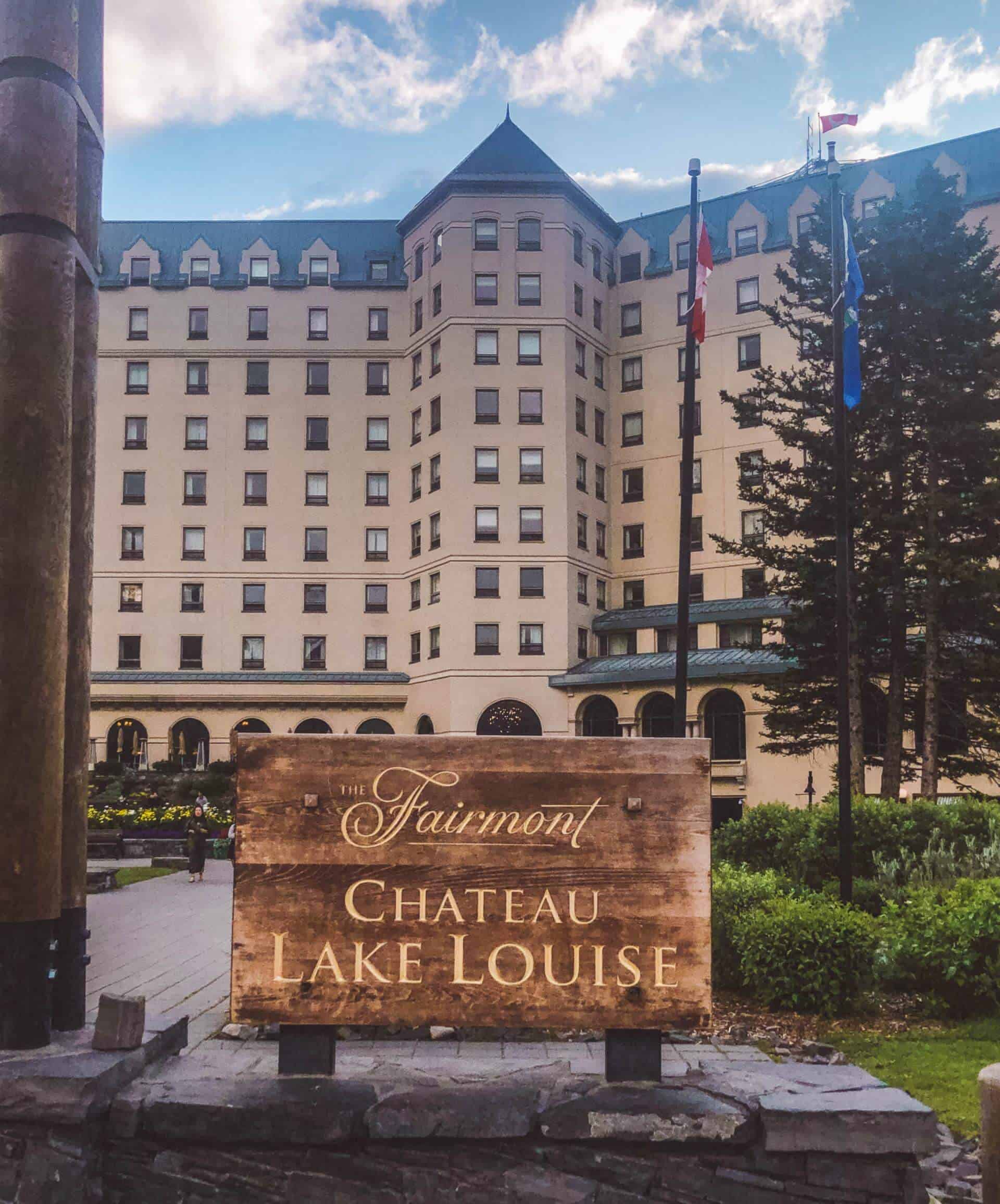 On day three of your Canada travels head back to Banff National Park for a taste of Lake Louise.  Near Moraine, but not close enough to walk between the two, Lake Louise is well known for the luxury Fairmont Hotel that sits on its grounds.  Spend your day lunching at the Fairmont, renting kayaks to go out on Lake Louise, or hike to one of the teahouses that sit atop the mountain. 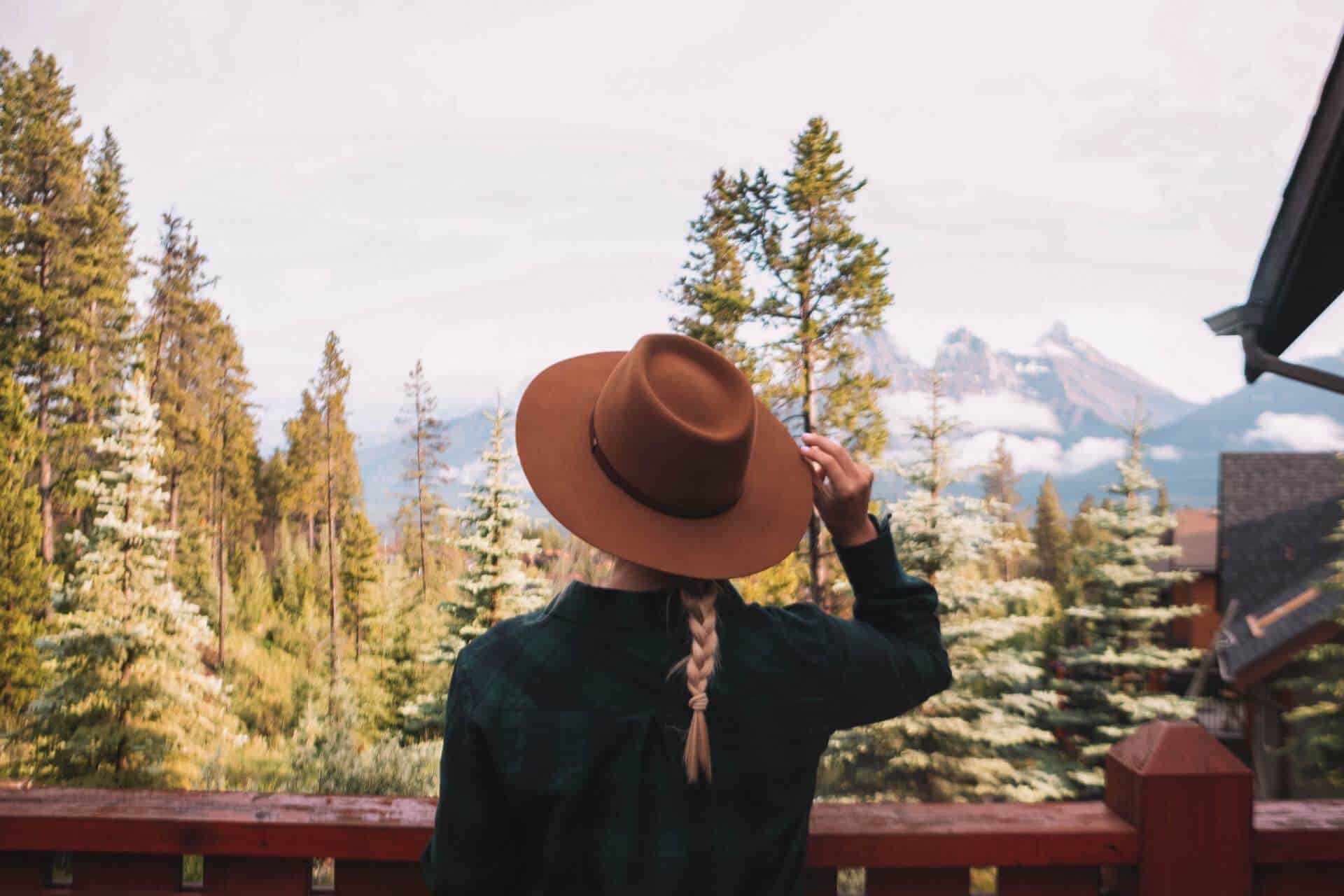 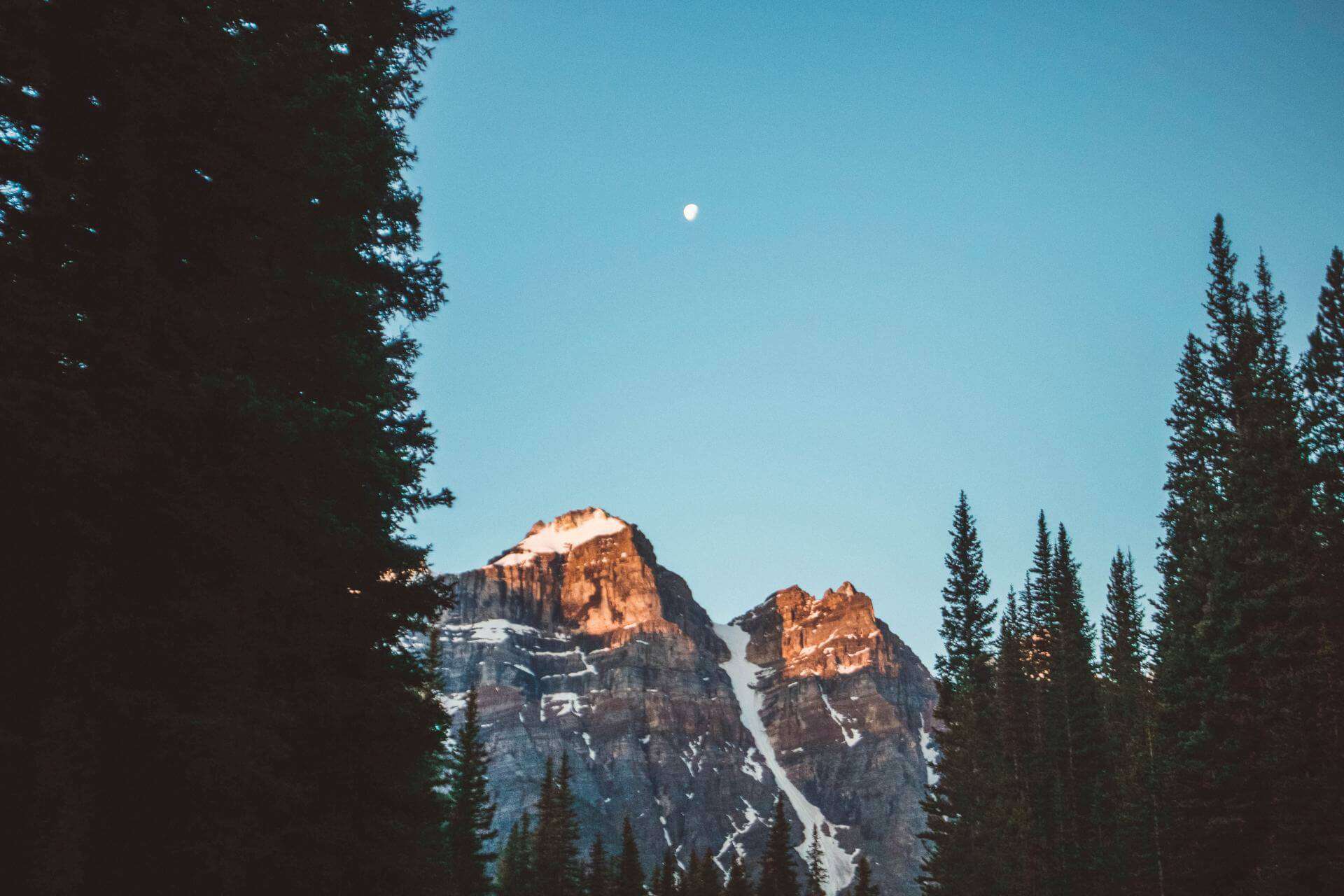 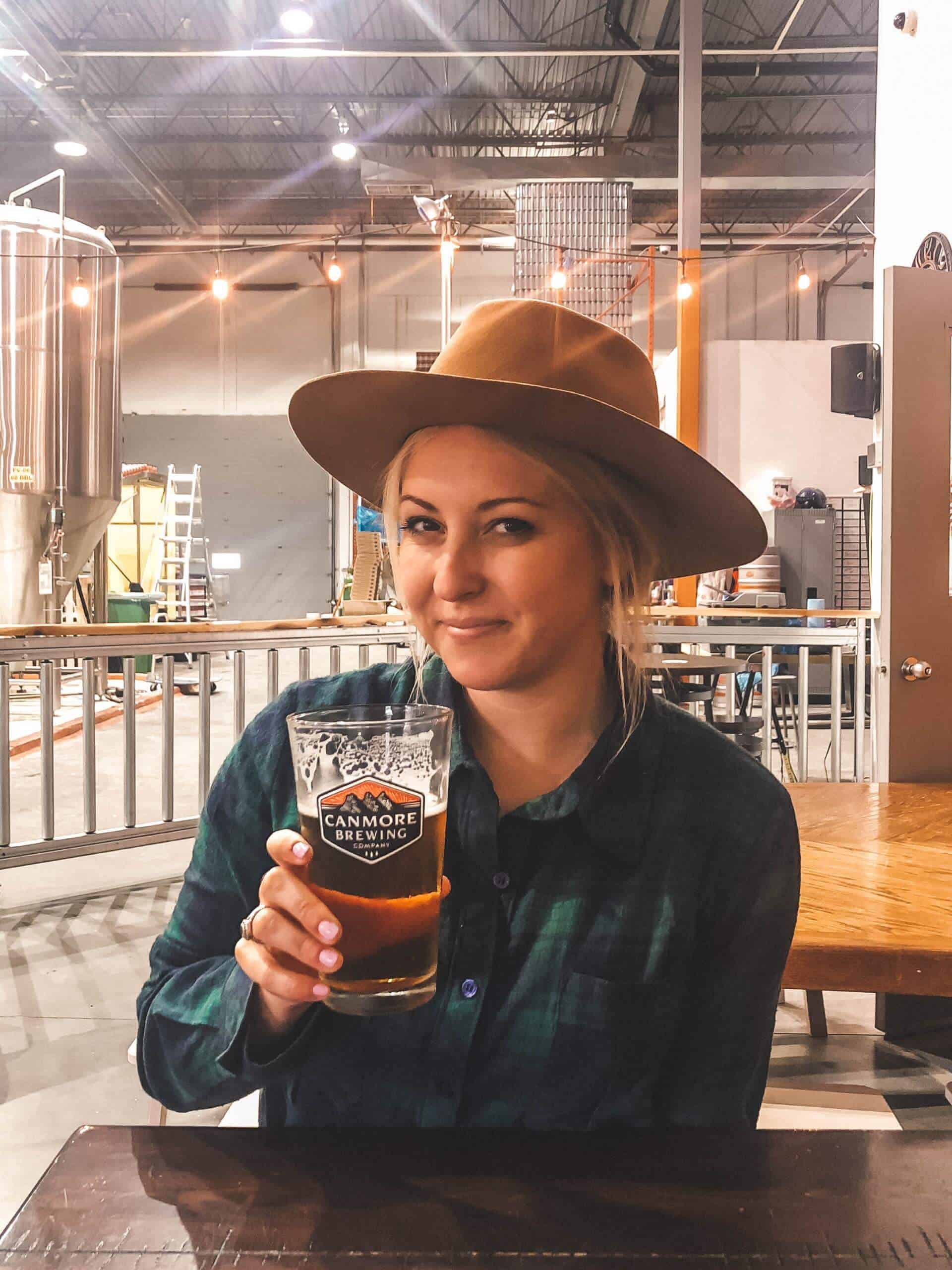 Your last day in Alberta, spend time in the quieter, less touristy town of Canmore.  Start with a hearty breakfast at the underrated Summit Cafe fueling up for a day of hiking.  Spend the afternoon in the mountains hiking the Upper Grassi Lakes Trail Loop.  When night falls head into town for a quieter taste of life in Alberta and a Canadian beer at Canmore Brewing. 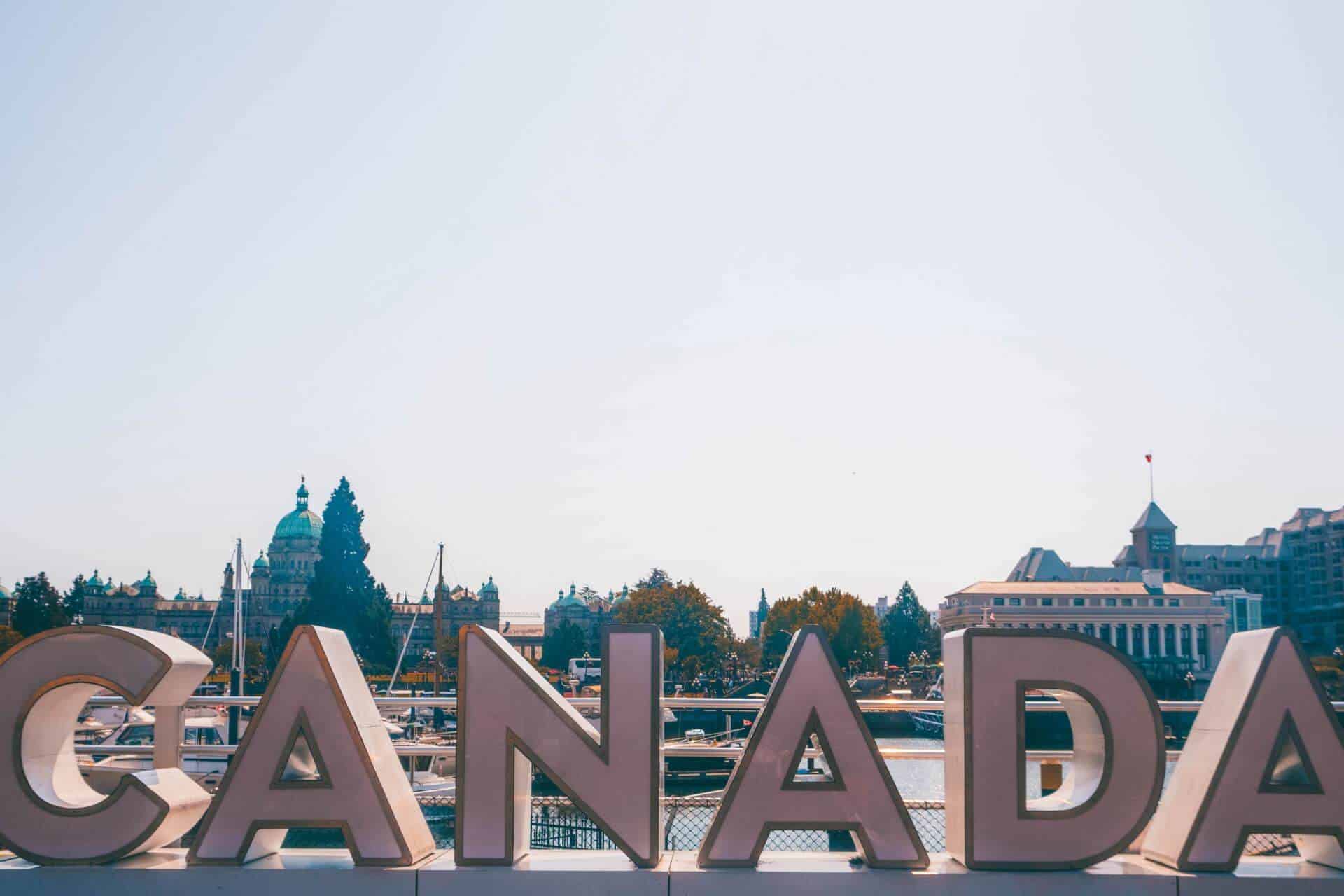 You’re not done with your Canada getaway yet!  Wake up bright and early to head further west to explore a different side of Canada.  From the outdoors of Alberta to the islands of British Columbia.  Unless you have a car and plan to drive the 12+ hours from Alberta to Victoria, BC your best bet is to fly. Head back to Calgary (YCC) for a less than two-hour flight that brings you directly to Victoria International Airport (YYJ).

If you’re planning on exploring the entirety of Vancouver Island, you’ll need a car to get around.  In that case, I’d recommend renting one from the airport.  Here you’ll have the choice of five different on-airport car rental companies – Avis, Budget, Hertz, Thrifty, and National.  Of those, I’ve personally had a positive experience with Avis.  (Please note:  If you choose to forego exploration of the island and only spend time in Victoria, you do not need a car.  Victoria is a very walkable town.)

290 miles long, 60 miles wide, Vancouver Island is home to vineyards, gardens, marine life, the capital of British Columbia, and more!  Once you pick your car up from the airport I recommend slowly making your way around the island before finally descending down south to spend the night in the capital of Victoria.

Before arriving in Victoria, make these stops along the way!

Butchart Gardens – Located outside the city of Victoria, the gardens have been blooming for over 100 years.  Stop in and see for yourself why Victoria is referred to as the “City of Gardens”.  You will need a ticket to enter.

Opt for a day at the vineyards 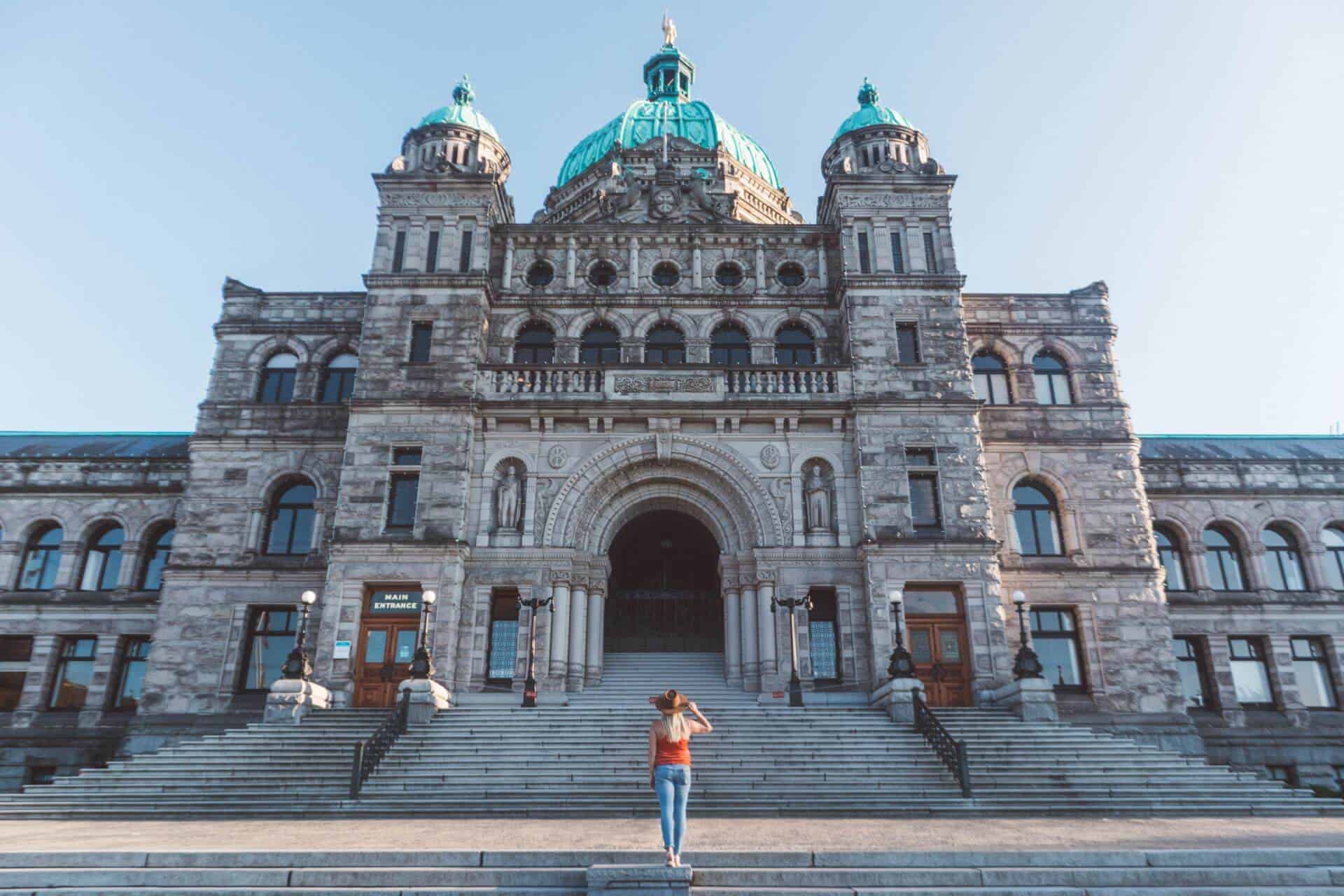 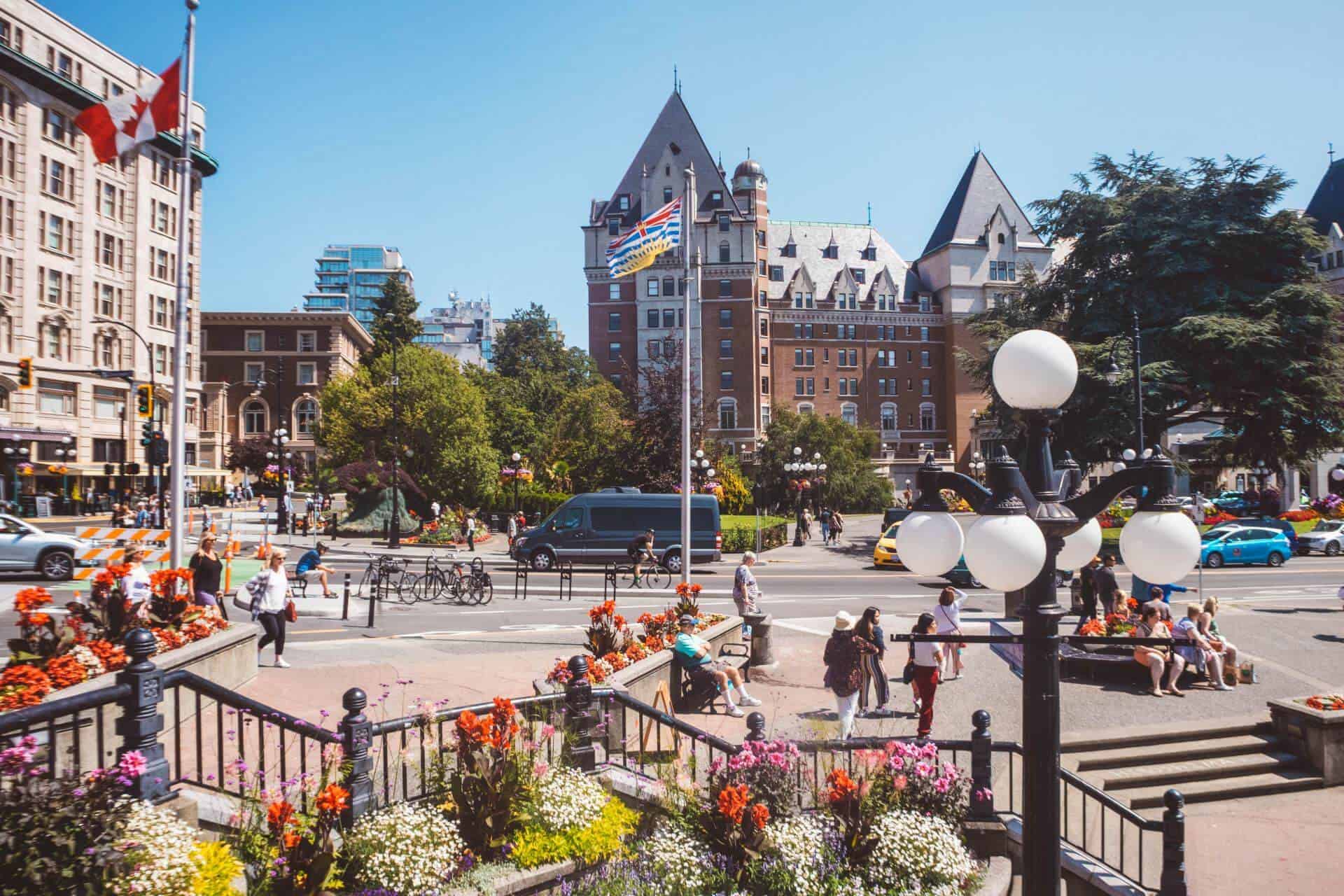 Wake up in the perfect Canada vacation spot, Victoria, the capital city of British Columbia.  A small town with a fascinating history, friendly locals (ranked as one of the top 15 most friendly cities in the world), fresh seafood, and a lively night scene.  Once the sun rises set out to see Victoria on foot.  Start by visiting the beautiful Parliament building, where construction began in 1893.  Walk along the wharf where you can see seaplanes take off, Canadian water taxis glide by, and marine life in the water below.  Make your way to Chinatown, the oldest in Canada, where you can walk the narrowest street in Canada – Fan Tan Alley.  Pop into any of the local shops on either side as you shimmy your way through this skinny street.

Once midday arrives, head back to the wharf for lunch at the outdoor restaurant, Red Fish Blue Fish.  Worth the wait in line, Red Fish Blue Fish is an outdoor restaurant known for its fish and chips.  Hang out along the harbor, maybe visiting the Flying Otter Grill for outdoor drinks after lunch.  Or if you’re interested in learning more about the history of Victoria book a ticket for a Discover the Past walking tour.

Once night falls, Victoria comes alive.  The Parliament building lights up, the bars become lively, and the restaurants get crowded. Start your night with a drink at the famed Empress Hotel and order one of their famous purple gin drinks.  End with dinner at Olo or Il Terrazzo and a nightcap at Little Jumbo.

WEDNESDAY – Depart British Columbia, Fly Back to the USA

Eight days later and your Canadian vacation has come to an end.  Depart Wednesday in time to get back home and to the hospital for your shift on Thursday.

For more on visiting Canada you may like these articles:

23 Photos to Inspire You to Visit Alberta in the Summertime

How to Spend the Day Solo in Victoria, BC

If you’re visiting Alberta or BC from the USA, you do not need a plug-in the adapter

If this is your first time hearing about the “8 Day Vacay” and would like some more background info, please click here. 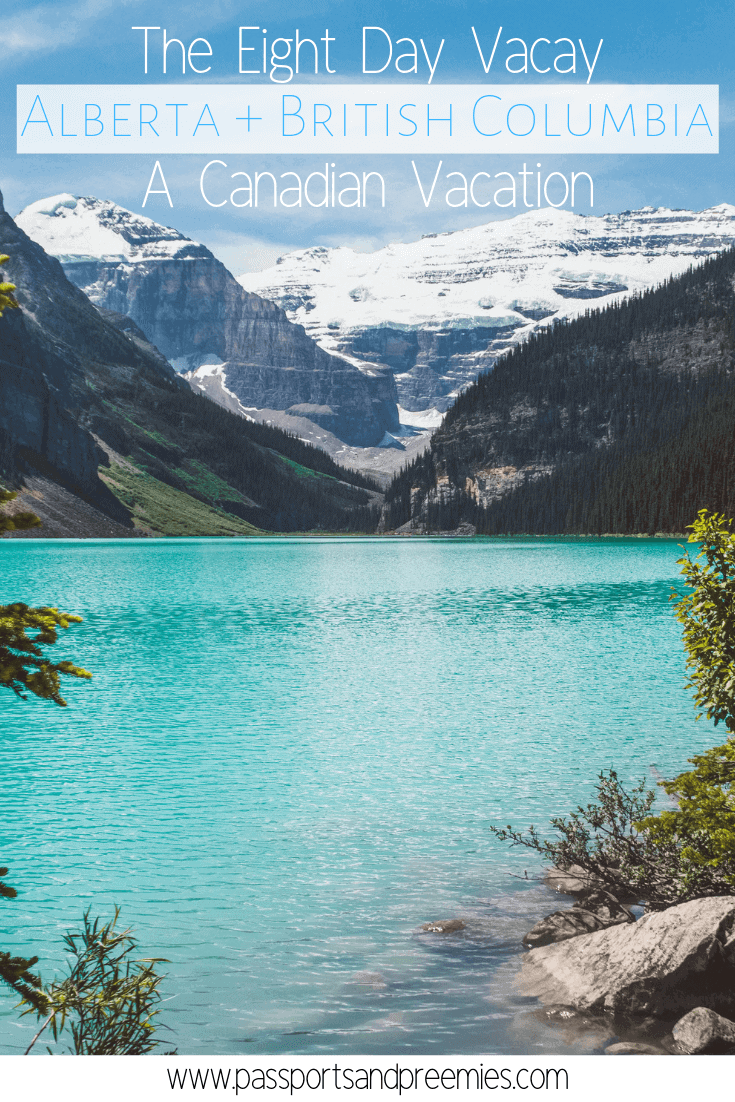 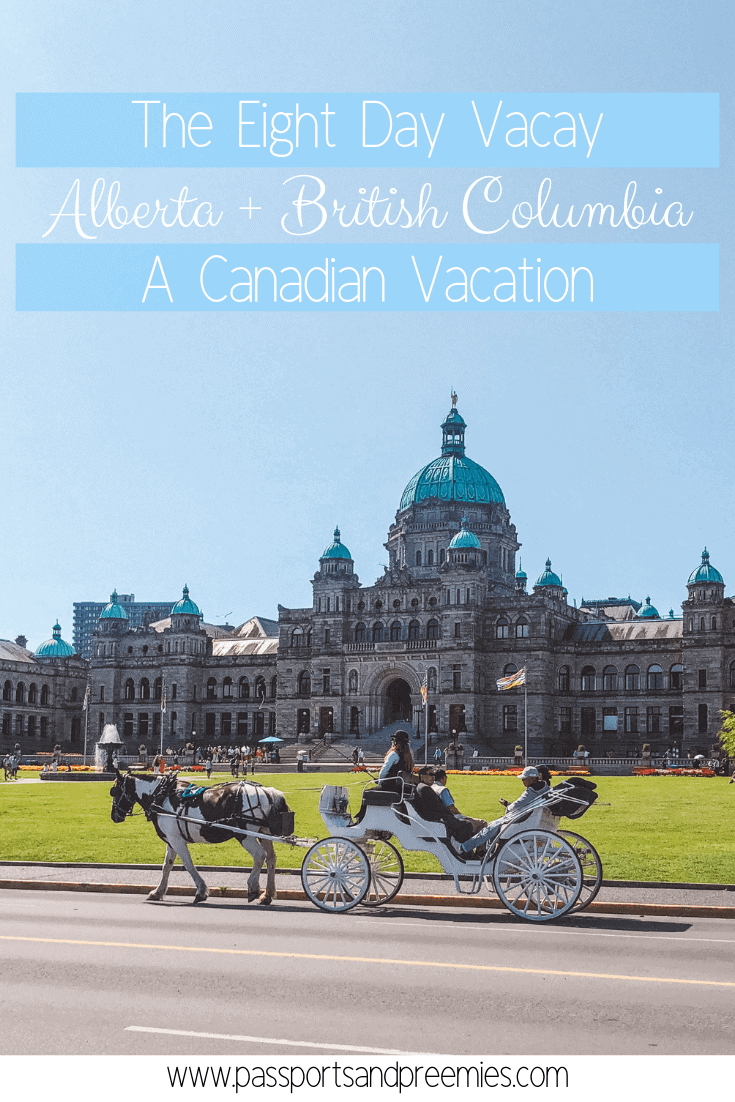 Disclosure:  Please note that some of the above links are affiliate links.  At no additional cost to you, I earn a commission if you make a purchase.  I would never recommend something that I don’t personally use and love.  Thank you for your support!