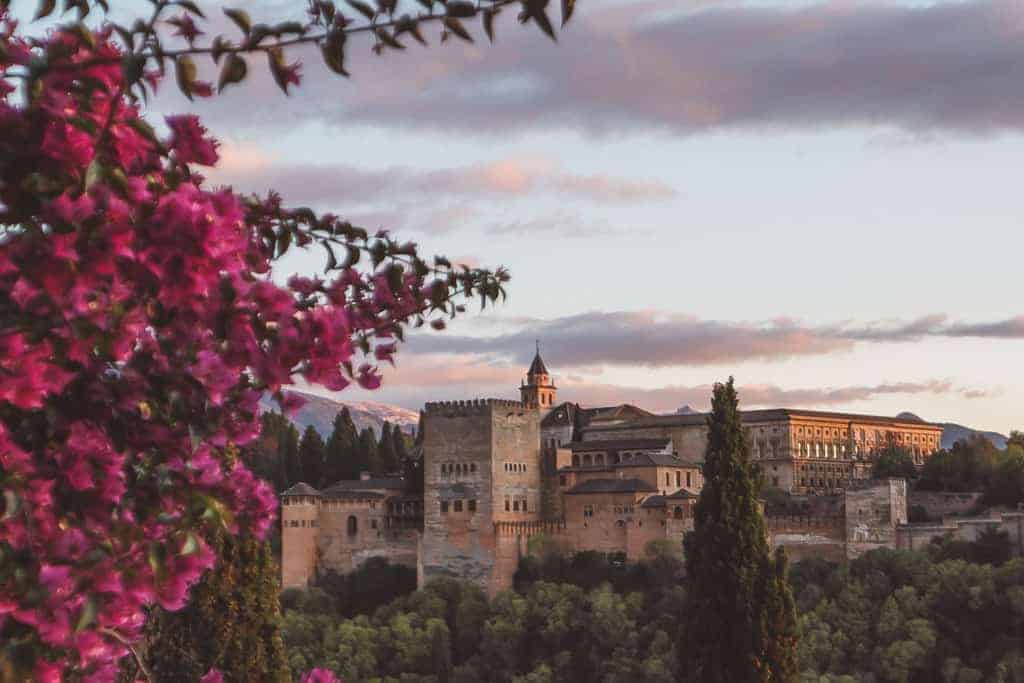 Located in Southern Spain, in the Andalusia region, Granada is a lively city with both Christian and Muslim influence.  This eclectic city is found at the foot of the Sierra Nevada Mountains, sees nearly 2.5M visitors per year, with its biggest attraction being the Alhambra.  If you’re visiting Southern Spain its ideal to spend one day in Granada, and if you’re lucky, even more!

The “Moors” founded Granada in 711 AD, although it had been inhabited for much longer and wasn’t yet known as Granada.  Moors primarily refers to Muslim people from the Maghreb, Iberian Peninsula, Malta, and Sicily during the Middle Ages.  Because the Moors ruled the area for so long, you can still see much Muslim influence in Granada, most notably the Alhambra.  Eventually, the Christians ended the rule of the Moors, which is known as the “Reconquista”.  What was once a city of Muslim influence quickly turned into a predominantly Catholic city.  Cathedrals and Churches replaced mosques; Muslims were required to convert to Catholicism.  And although it was proposed that the Alhambra – a complex built by the Nasrid Dynasty (Muslims) – was torn down, to this day it still stands.

If you’re lucky enough to visit Granada expect to find a city rich in history and culture where passion exists in people’s everyday lives.  A city that values a true “tapas experience” – where you buy one drink, receive a plate of food for free, where Flamenco is danced, and the locals are friendly and inviting.

Making the Most of One Day in Granada, Spain

What to see in Granada, Spain in one day – Spending the morning at the Alhambra There are a lot of things to do in Granada, but visiting the Alhambra should be one of your highest priorities.  The Alhambra sits atop al-Sabika hill overlooking the city.  The first historical documents of the Alhambra date back to the 9th-century where it is documented that it was used as a fortification system.  It wasn’t until the 13th-century that the Nasrid Dynasty arrived turning the Alhambra into a royal residence.  As previously mentioned, the Alhambra was almost torn down after the “Reconquista” because it was representative of the Muslim faith.  Luckily plans were never enforced and the Alhambra still stands to this day.  However, it used to be a white-colored building, and now its a tan-colored building because it wasn’t well taken care of because it was representative of the Muslim faith. If you’re coming to Granada to tour the Alhambra you must plan in advance.  I attempted to get tickets two days before arriving and was unsuccessful.  This is because only a certain number of visitors are allowed to enter the Alhambra per day.  You can buy Alhambra palace tickets here and hours vary based on time of the year.  From April 1-October 14 hours are from 0830-2000 and from October 15-March 31 hours are from 0830-1800.  Make sure to show up at your allotted time or else you may not be able to enter.  A full visit to the Alhambra tends to take three hours.

What to see in Granada, Spain in one day – Spending the afternoon hitting the tourist hot spots From the Alhambra I encourage you to walk along Paseo de Los Tristes, the street running parallel to the Darro River.  Walking along the river will take you from the Alhambra back to the center of town.  Once you are back, head to the Granada Cathedral.  As mentioned earlier, when the Reconquista occurred, Muslim influence was replaced by Christian influence.  At the time the Granada Cathedral replaced a Mosque that was once at the heart of Granada.  It’s unique for being the first Cathedral to have renaissance art and is the fifth largest cathedral in the world.  It costs five Euros to enter and you’re given an audio guide explaining what everything is in the church. Located just steps from the Granada Cathedral, next head to the Royal Chapel of Granada.  This is where the Spanish monarchs, Queen Isabella I and King Ferdinand have been laid to rest.  Like the Cathedral, it costs five Euros to enter and you will be given a complimentary audio guide walking you through the Chapel.  I was highly impressed with both the Cathedral and the Chapel and think it’s well worth it to visit both places.

What to see in Granada, Spain in one day – Spending the night in Granada Before night falls walk through town up to Mirador de San Nicolas to watch the sunset behind the Alhambra.  It’s sure to be crowded so arrive early for a front-row spot.  Or if you prefer, there’s a restaurant nearby – El Huerto de Juan Ranas if you’d rather have drinks while watching the sunset.  This also tends to be quite crowded so make sure to arrive well before sunset to snag a seat. Once the sun sets head back through the narrow cobblestone streets to the center of town for a true tapas experience.  Tapas are Spanish “snacks” and it translates to a small portion of food.  In Granada, a true tapas-style meal is celebrated in most bars and restaurants.  This is when you order a drink and receive free food to go along with it.  Some restaurants give you a dish and some let you pick your own.  If you stay and get more than one drink, a new dish will be served with your new drink, and so on.  For a true tapas experience in Granada head to the popular tapas bar Bodegas Castañeda.  Expect yelling, crowds, and excitement as you belly up to the bar to receive your drink and food.  If you prefer more of a quiet and intimate setting try Ibéricos Alhambra, where you can expect to be served some variety of meats and cheeses.

Granada is a city of life and character.  There’s so much to explore, so many things to do, and it should be at the top of your list if you’re traveling through Southern Spain.  Oozing with charm don’t make the mistake of skipping out on Granada.  And while you can hit the hot spots with one day in Granada, I’d recommend staying even longer.

Thinking of taking day trips from Granada?  See why I’d recommend both Seville and Málaga.

For more suggestions and recommendations on Granada, make sure to check out my Instagram page/highlight reel. 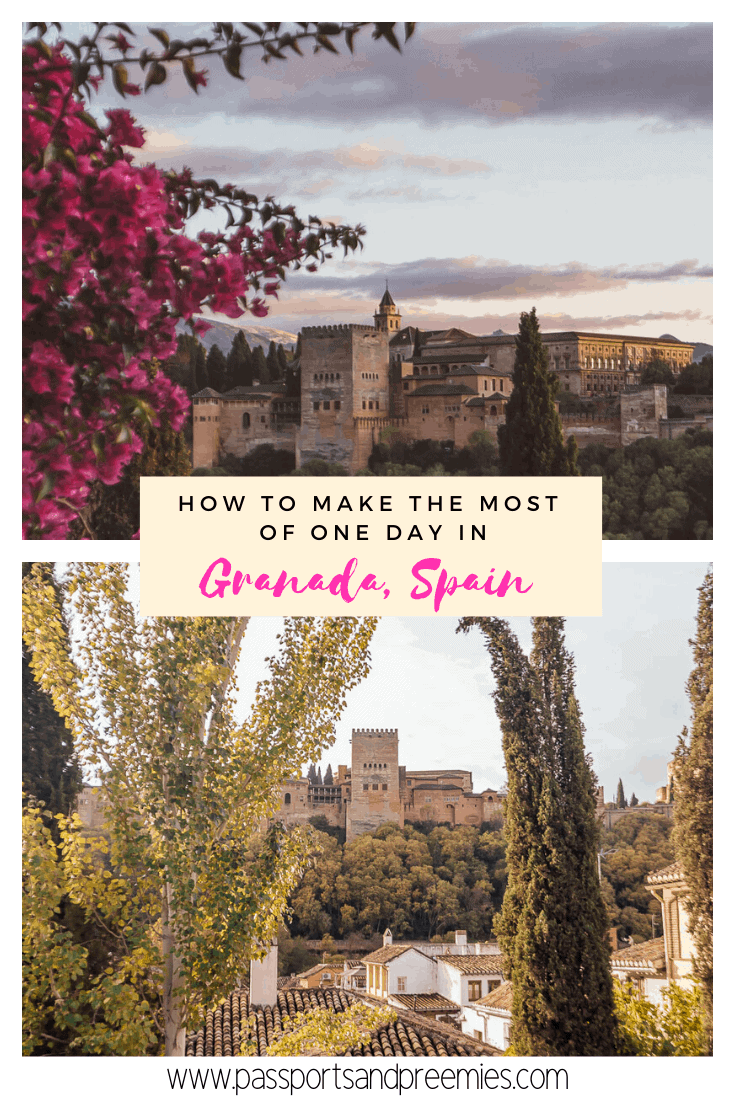 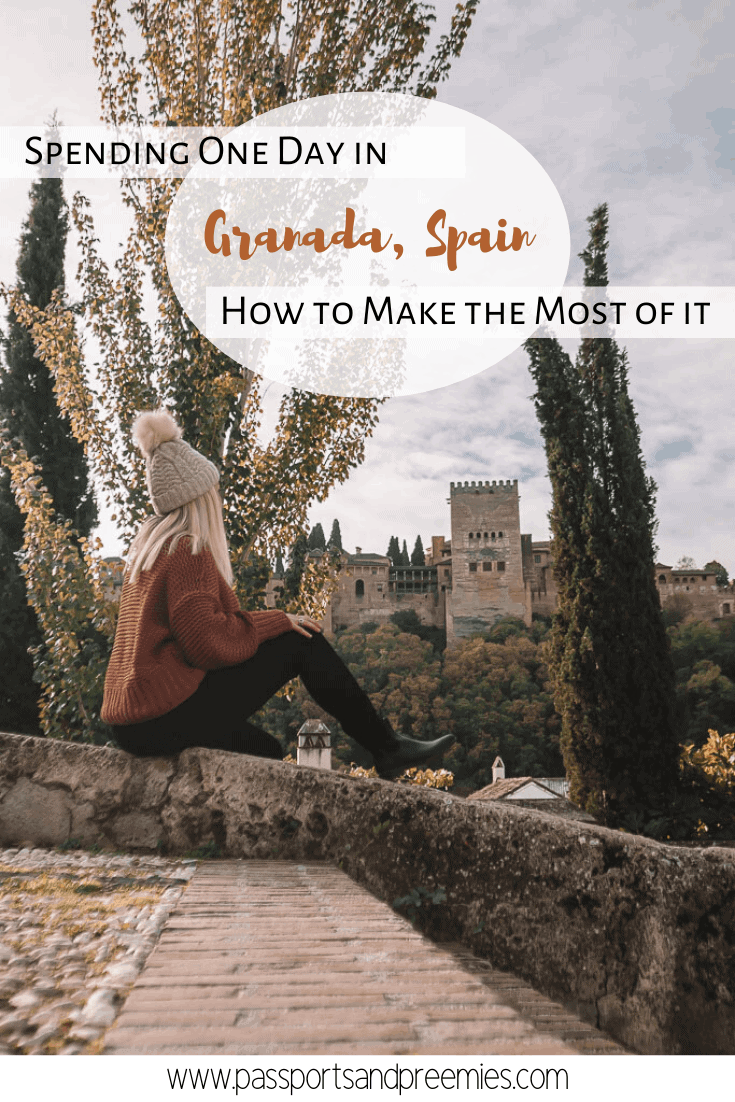