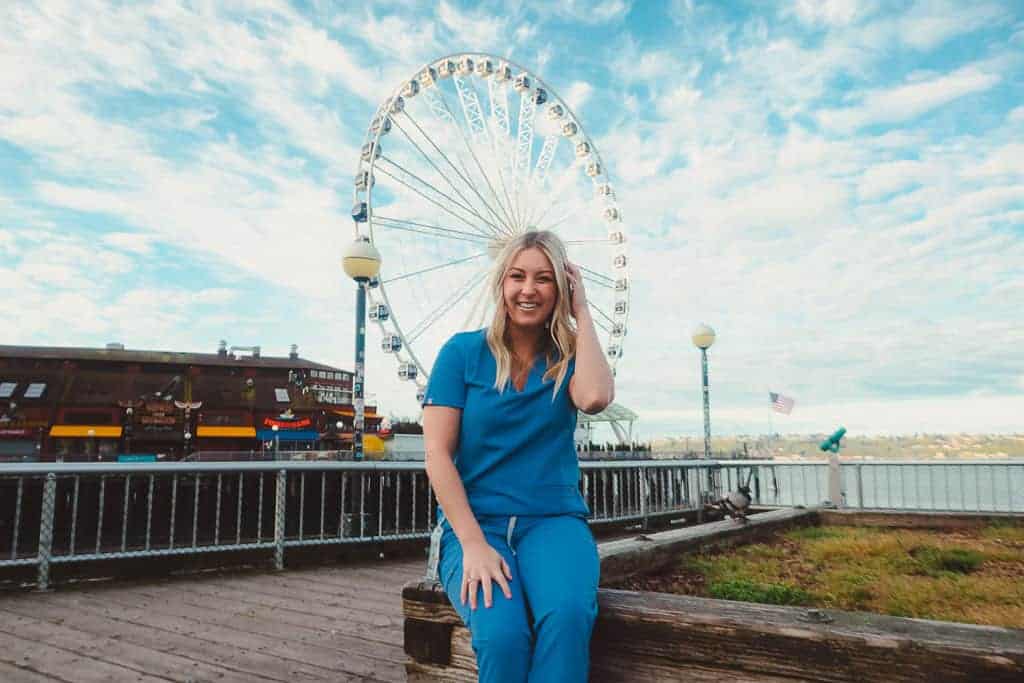 Share Me!
I don’t know when exactly my desire to become a travel RN (registered nurse) occurred.  Potentially in nursing school.  Potentially as a new grad.  All I know is eventually, I couldn’t shake the feeling of wanting to travel more, meet new people, and learn from doctors, mid-levels, and nurses all around the country.  And while I wouldn’t change my journey for anything… there are some things that I wish I knew before jumping into the crazy world of travel nursing.

1.  No matter how long you’re a travel nurse… it will suck to constantly feel like the “new nurse” on the unit

I’ve been traveling for close to three years now and every single time I start at a new hospital I get the same insecure feeling back.  That I’m not good enough, nobody wants to be friends with me, the works!  And it sucks.  But as long as you hang in there, the reward is so much greater than those initial feelings.
The truth is that everyone is simply feeling you out.  And you’re feeling them out as well, it’s a two-way street.  Don’t let those feelings of negativity get in the way of doing your job to the best of your ability.  People will eventually come around, whether it’s a few days, weeks, or even months.  The payout, in the end, is so much greater than your insecurities in the beginning.

2.  Taking everything you own to an assignment is more of a pain in the butt than anything else 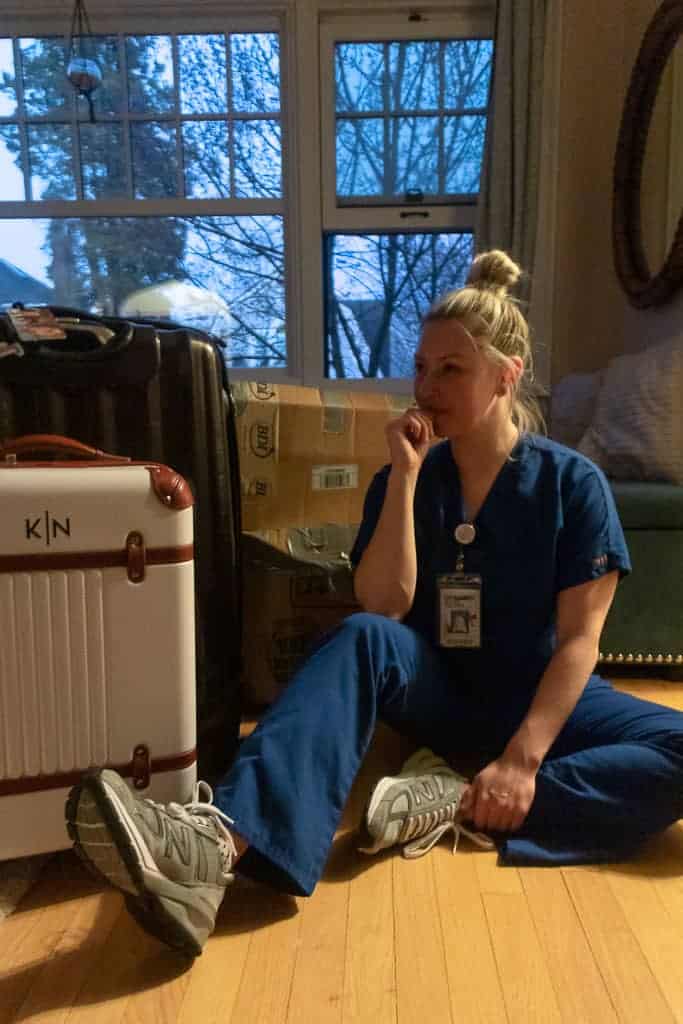 My first cross-country travel assignment took me from Nebraska to Santa Barbara, CA.  I took EVERYTHING with me (including my crockpot).  My SUV was packed to the brim, and I could hardly see out my windows.  Instead of enjoying my road trip, I spent the next two days stressed that someone was going to break into my car and steal my things as I drove west.

It took me driving to three different states (from Nebraska to California, California to Arizona, and Arizona to Texas) to realize I was doing it all wrong.  That in fact, the true joy of travel nursing is arriving at an assignment and not spending all day unpacking unnecessary items.  To be able to throw items in the car and just take off!  Realizing that you can buy anything you need or miss once you arrive.

Need more help with this?  Check out my post, How NOT to Pack for Your First Travel Nurse Assignment to get a better grasp on why it’s a terrible idea to overpack as a travel nurse

3.  You’re not weird for exploring your new city alone

It’s hard to arrive in a new city where you may not know anyone.  But it’s even harder to stay inside all day because you feel weird doing things by yourself.  The way to get out and meet people?  You have to leave your apartment.  And guess what… if you spend time alone, nobody is judging you.  And guess what else – you may even enjoy it.
When I began moving to cities where I didn’t know a soul, I’d feel so incredibly awkward about doing things by myself.  But what a shame.  Because while nobody cared that I was alone, I was sitting inside missing out on all the fun to be had!  I would leave assignments and think “I wish I would have done X, Y, and Z while I was here”.  Don’t be that person.  And if you still feel uncomfortable… try to plan things to do during the weekdays in the afternoon when there will be fewer people around.

4.  Don’t, under any circumstances say, “In MY home hospital we do it this way”

This is one thing I wish I had learned before leaping into any type of travel nurse position.  When you show up on an assignment you’re there to help.  Not to make the staff nurses feel like their way of doing something isn’t good enough.  The sooner you learn that there are many ways to get the job done, the sooner you can get off your high horse and make some friends!  Also, try to think of this the other way around.  What if you were SO busy at work you hired on travelers.  But once they arrived at your unit they just criticized the way you do your work.  Annoying, right?
Now, this isn’t to say that if your opinion is asked for you can’t share.  I’ve learned to keep it to myself when not asked, but when asked I give an honest answer.  If someone is asking, they truly want to know how to improve!

5.  To make friends… you have to be a friend 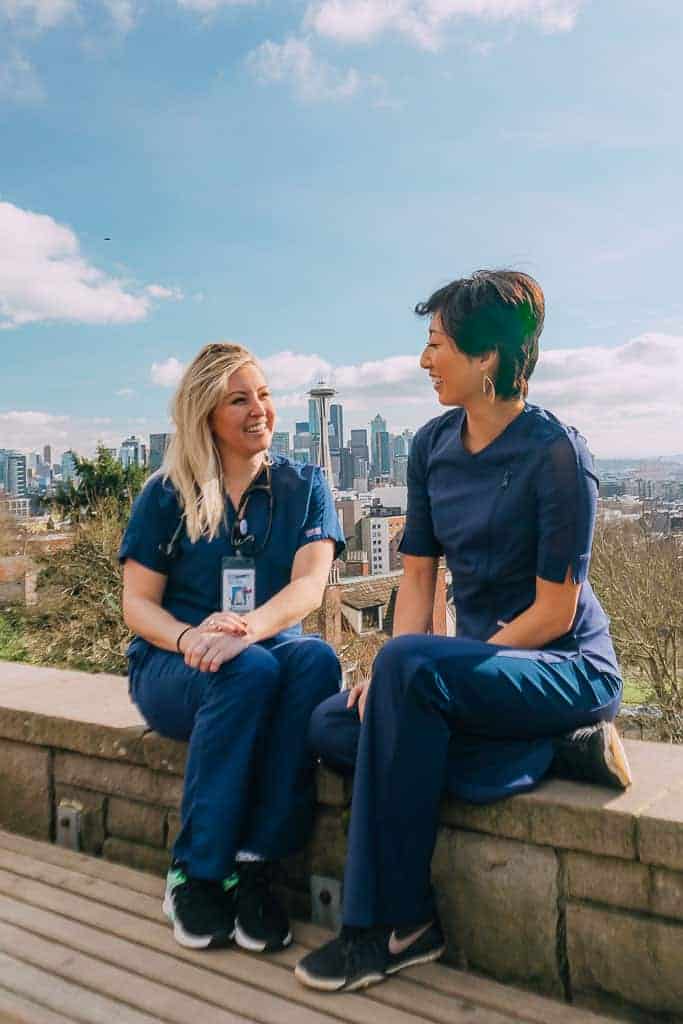 Sometimes nurses can be… territorial.  All you have to do is soften them up!  I find the best way to make friends is to be a friend.  Help out around the unit (even if nobody has offered to help you).  Bring snacks, introduce yourself first, and you’ll have new friends in no time!

6.  Don’t burn any bridges.  Once you have been on the travel nurse train for a while, you realize the community is quite small after all

After I had a few assignments under my belt, I started to realize that the pool of travel nurses seemed to be quite small!  There’s always someone who knows someone, etc.  PLUS the way to land those coveted positions?  A recommendation!  I’ve been able to email managers from some of the best hospitals in the United States and say “I know X traveler that used to work on your floor.  I’d love to work there too.”  And bam, the job is mine.  Make friends, be nice, and don’t burn any bridges.  You never know who will get you to your next assignment and who has the hook up to what hospital.

7.  You will never be thrilled about your schedule; Embrace it!

While there are loads of perks to being a travel nurse, your schedule isn’t one of them.  You’re usually working more weekends, most Fridays and Mondays, and you’ll always be moved around first.  On top of it all, you don’t tend to get your schedule until a few days before you are supposed to show up to work.  Which can be stressful and make it hard to make plans.  But the sooner you embrace it, the sooner you’ll be able to sit back, relax, and enjoy the ride!

When I began travel nursing I felt guilty about “recruiter hopping”.  A few assignments in I learned that I was the lowest-paid traveler on my unit, while all the other newer travel nurses who were with the same company that I was with, were making $200 more per week than me.  I quickly learned that sometimes it’s okay to be selfish even when you feel like your recruiter “put in the work” and you don’t want to screw him/her over.

How to Pick the Right Travel Nurse Recruiter For You

The same goes for travel nursing companies.  It’s usually best if you can find a few companies you like and start to compare what they offer to what your other company offers.  This way you can maximize pay and benefits!  On the flip side, don’t be greedy.  If something feels right, take it!  Even without comparing the contract to another company.

Searching for a travel nurse company to use?

9.  There are plenty of travel nursing jobs out there, be patient

While I never had an issue landing a job, for the first year (or so) of travel nursing I did have an issue landing my dream job.  My goal has (and still is) to always get into the biggest and best NICU around.  While also traveling in some of the most popular destinations in the states – Seattle, San Francisco, Boston, etc; mainly where everyone else wants to go too.

The first year when my resume would go out to the big, well-known hospitals, all I would hear were crickets.  It took some time to build myself a reputation in travel nursing and there’s nothing wrong with that.  Now having signed onto my eighth assignment (in what is currently the #14 NICU in the US), I am starting to get offers to hospitals that I have always dreamed of working in.  Stick in there, it will happen for you too!

However, never let a recruiter push you into something that you don’t want to do.  I’ve had plenty of times where my assignment is set to end in two weeks and I still haven’t signed my next contract.  Recruiters will call with mediocre paying jobs, in places I don’t want to live, all because they know my current contract is ending and I don’t have anywhere to go next.  Wait it out.  Something that you want is bound to turn up!

10.  The best part of travel nursing?  The amount of time you can take off between assignments.  Once you get a taste of this, you’ll never go back 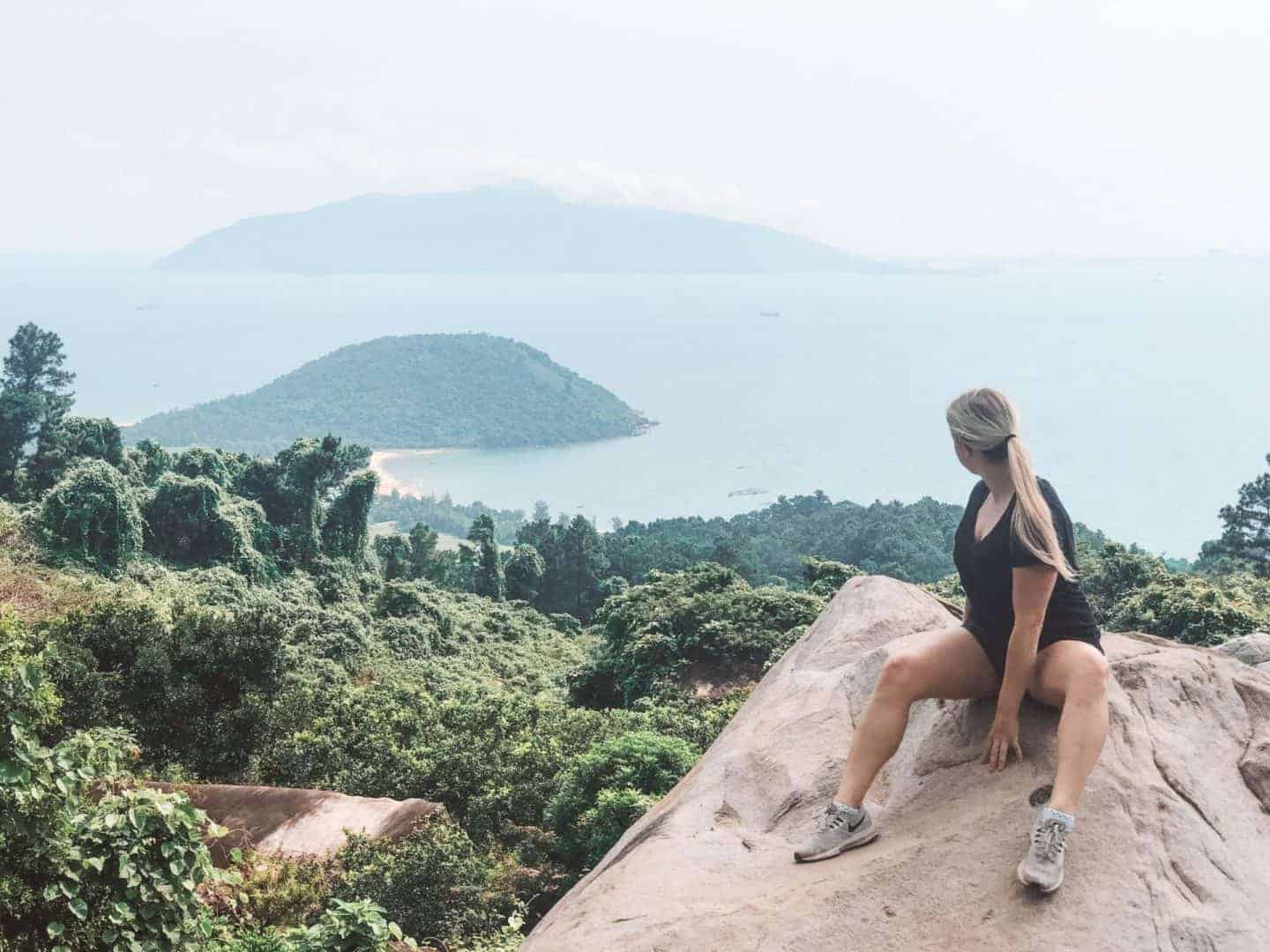 And the very best part about being a travel nurse?  All of the time you’re allowed to take off between assignments.  When I became a travel nurse, I began to take 1+ week breaks between assignments, which is more vacation than I had ever taken as a staff nurse.  What I realized was that while I was traveling more, it made me become a better nurse.  I felt less burned out and truly felt like I was on to something.  Was the key to preventing nurse burnout as simple as traveling?

2.5 years since becoming a travel nurse I have now taken two huge breaks between my assignments.  My first break lasted 10-weeks and took me to Macedonia to volunteer nurse, while I got my first taste of solo travel by traveling on the weekends.  My second break lasted 17-weeks and took me through 10 countries in Europe, and four in Southeast Asia.  As a staff nurse, I could never dream of taking that kind of time off.  And now that I’ve had a taste of it, I don’t think I could ever go back.

So you see, being a nurse is truly great.  But being a travel nurse?  It’s an adventure for the books.  And one that I truly hope that everyone decides to venture into at some point in their career.

Are you ready to become a travel nurse?  Read these posts for guidance!

Why Travel Nursing?  Taking the Leap from Staff Nurse to Travel Nurse 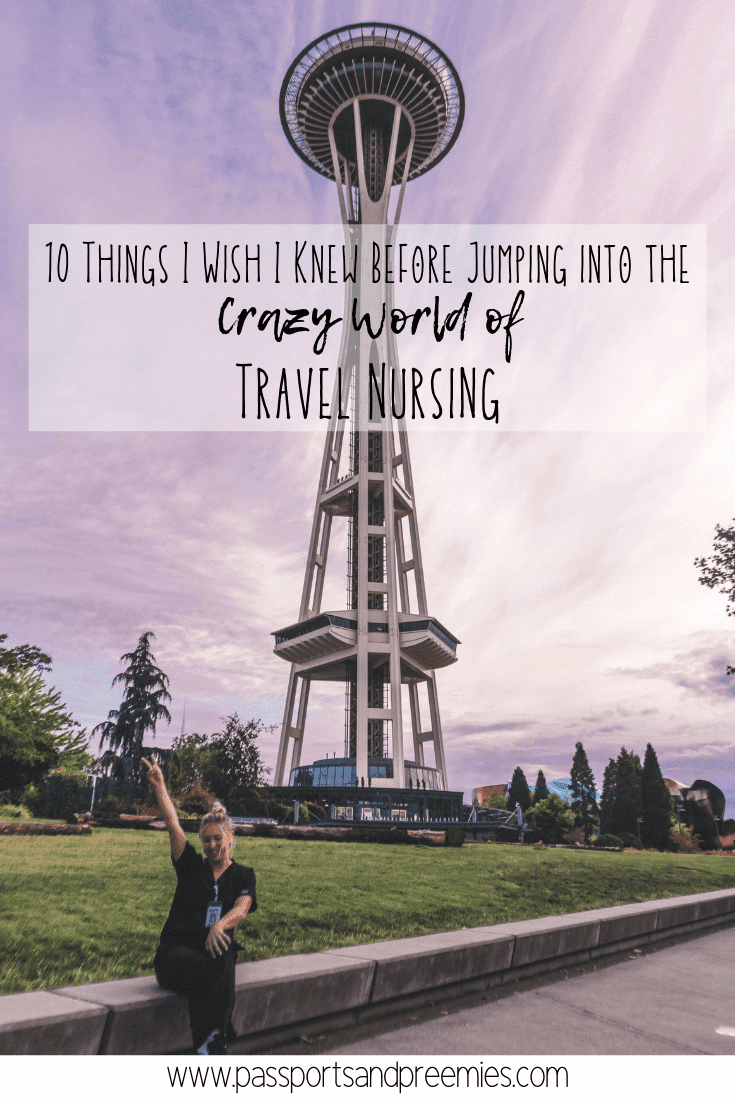 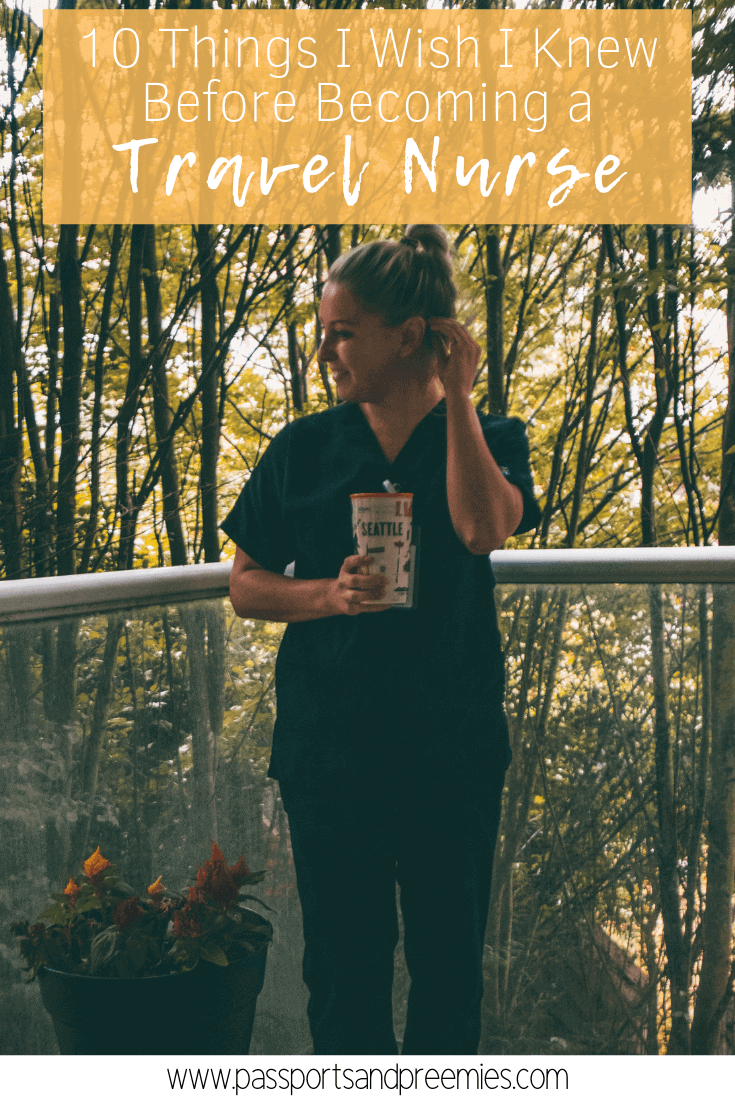