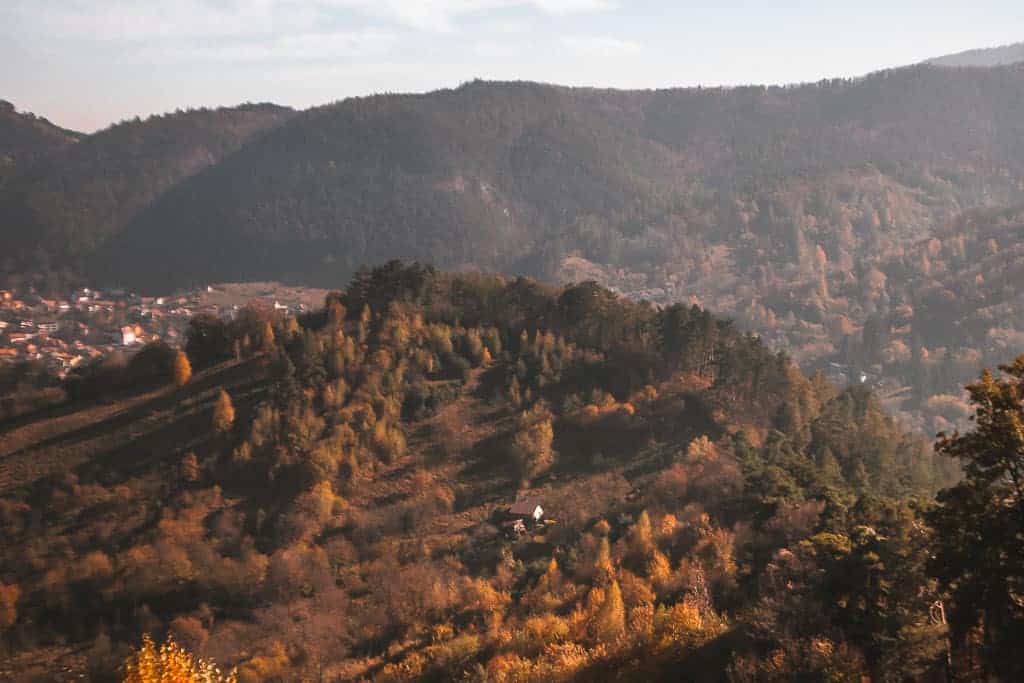 Romania is a country of epic portions and one that largely gets overlooked by people who flock to the obvious – Italy, France, Spain, etc.  The thing that nobody realizes though, is that Romania is an incredible and diverse country with tons of things to see and do.  Being a fairly cheap destination, Romania is a country where your dollar goes far and you can spend a long time in the country without breaking the bank.  Here are 10 epic things to do in Romania and 10 reasons why you should make it a priority to visit. 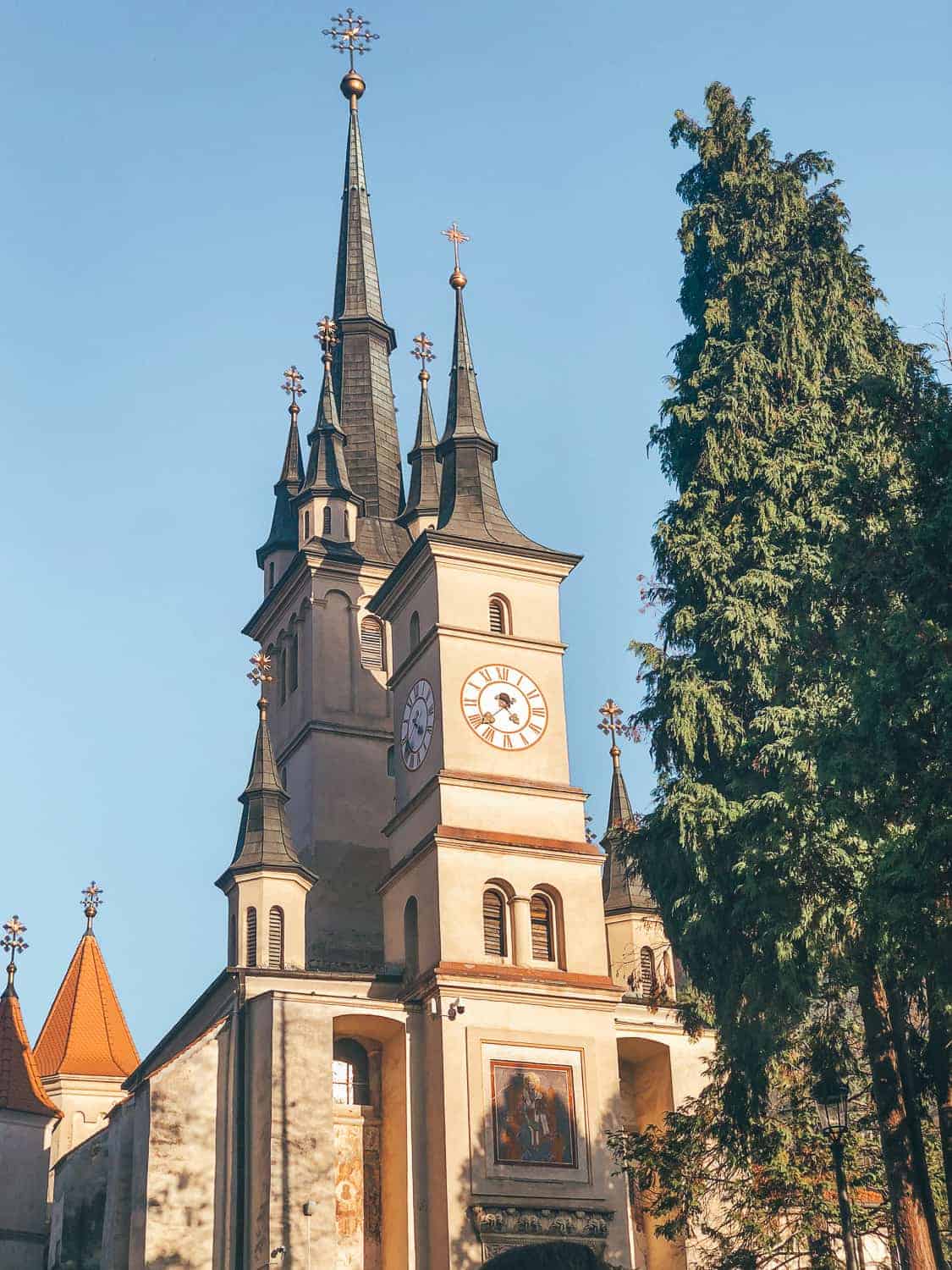 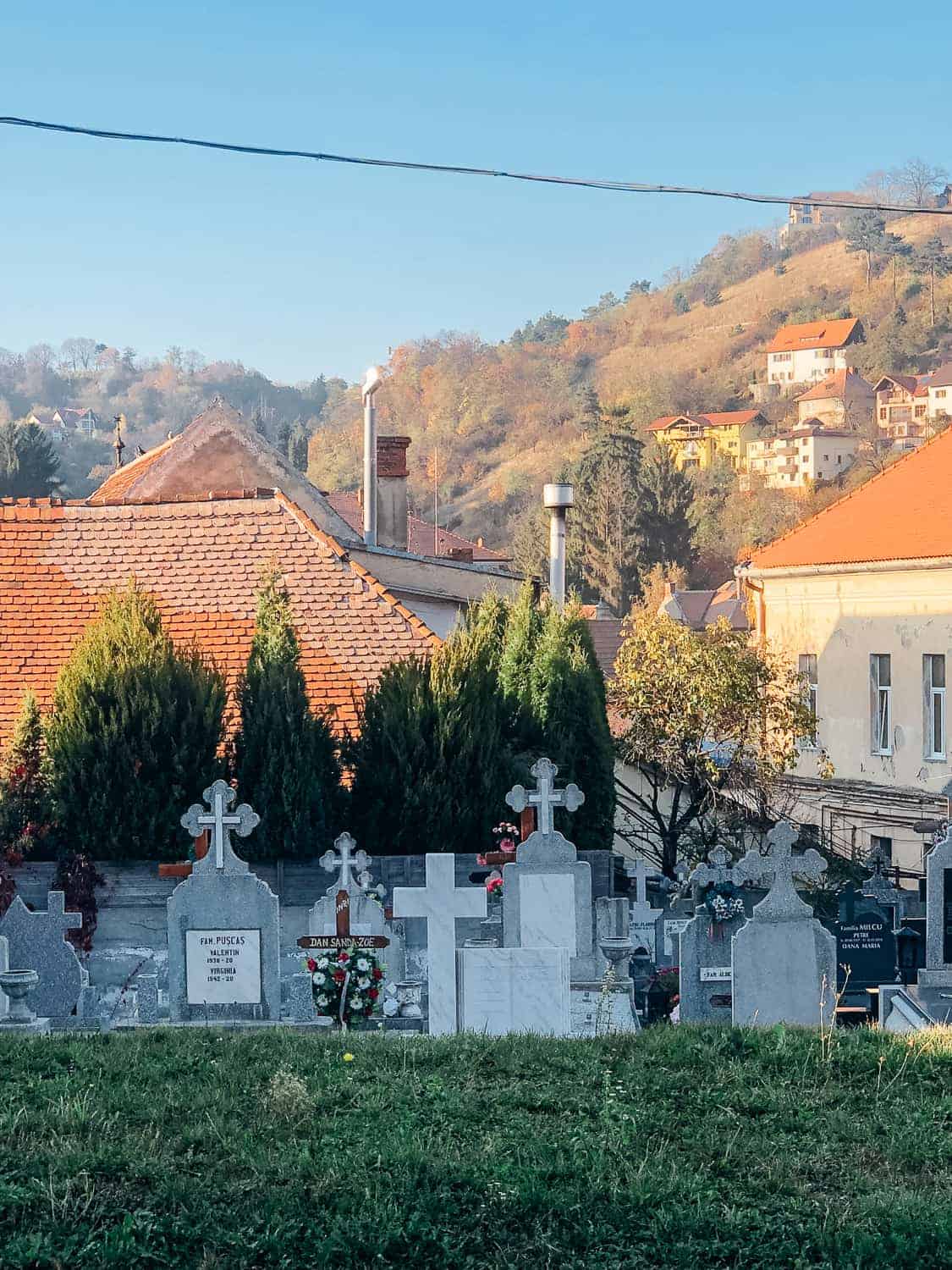 Before we dive into how incredible the country is, I think you’ll best appreciate it by first knowing the history of it.  The history of Romania goes way back, back to 440 BC when the first written evidence of people living in present-day Romania was found.  However, 34,950-year-old modern human remains were found in 2002, the oldest human fossils in Europe, leading people to believe that Romania was the entry point for some of the first humans to ever come to Europe.  Fast forward to the middle ages, and the Bulgarians and Hungarians occupied and controlled areas of Romania leaving a lasting influence on Romania today.

Most notably as the years move on, Romania began to get a reputation for vampires and dark history.  That came about in 1448 when Vlad Ţepeş, also known as Vlad the Impaler, became the Prince of Walachia (a region in Romania).  He was famously known for beating the Ottoman Empire (for a bit) and keeping Romania free for some time, however, his name has lived on in the Western World as the man who inspired the story of Dracula.

Throughout history, Romania was unable to come together as a united country until 1877 when the Walachia and Moldovia united and claimed their independence from the Ottoman Empire as modern-day Romania.

Today Romania is the 12th biggest country in Europe, taking up over 92,000 square miles, and made up of 10 different regions – Walachia, Dobrogea, Moldova, Transylvania, Bucovina, Maramures, Satmar, Crisana, Banat, and Oltenia.  Each region is known for something unique.  For purposes of this post, we will be focusing on the top Romania attractions in Walachia and Transylvania. 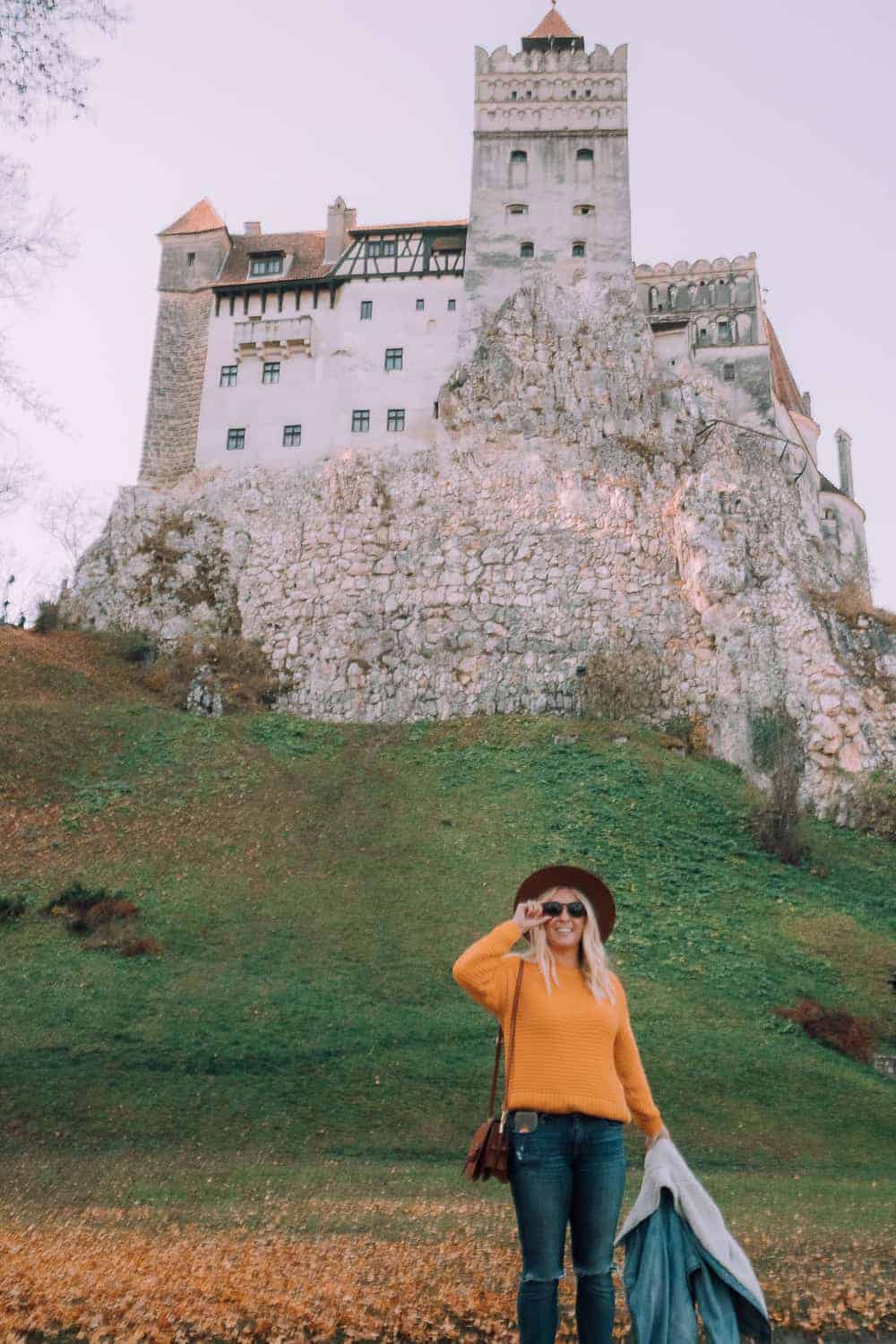 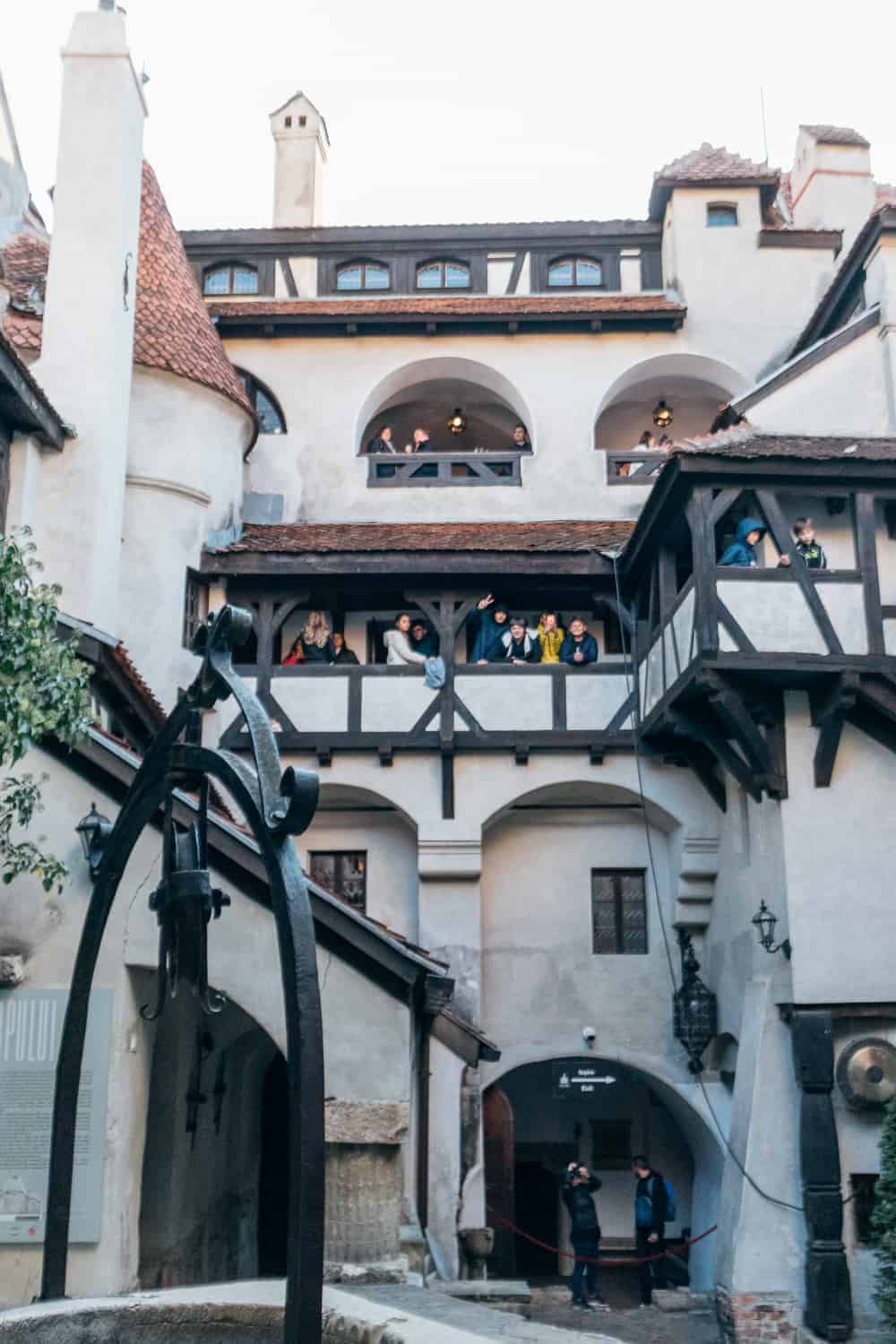 Bran Castle is an epic, eery Castle located in Bran, Romania outside of Brașov.  It’s most famously known as being “Dracula’s Castle”, drawing visitors from all over the world who want to discover how Dracula came to be and how Dracula was inspired by Romania.  Bran Castle is open seven days/week from 0900-1600 and at 1200-1600 on Mondays.  If you’re driving to Bran parking is limited but cheap.  It costs a mere four Lei/hr to park near the castle entrance.  To enter the castle grounds you do NOT need a ticket.  There will be a line queuing for tickets so if you don’t intend to enter the castle you can skip this line altogether and just walk along the grounds where there are shops, restaurants, and coffee stands.  However, if you do want to enter the castle you’ll buy tickets outside the gates before trekking up the steep hill that the castle sits on.  It costs 40 Lei to enter the castle.

2.  Go Back in Time at the Peleș Castle Peleș Castle is an enormous and ornate Castle in Sinaia, Romania.  Nestled amongst rolling hills and the Carpathian mountains, the area is referred to as the “Carpathian Pearl” for its beauty, and it’s not hard to see why.  Peleș was built between 1873-1914 for King Carol I and Queen Elisabeth as a summer residence.  Since 2007, it’s been owned by the Romanian Royal House and is rented out as a public museum.  To visit Peleș it costs 30 Lei and if you want to take pictures inside the Castle you’ll have to pay an extra fee.  Hours of operation are from 9:15 am – 5 pm and the complex is closed on Mondays and Tuesdays.

3.  Visit the Lesser-Known (But Just As Beautiful) Pelișor Castle 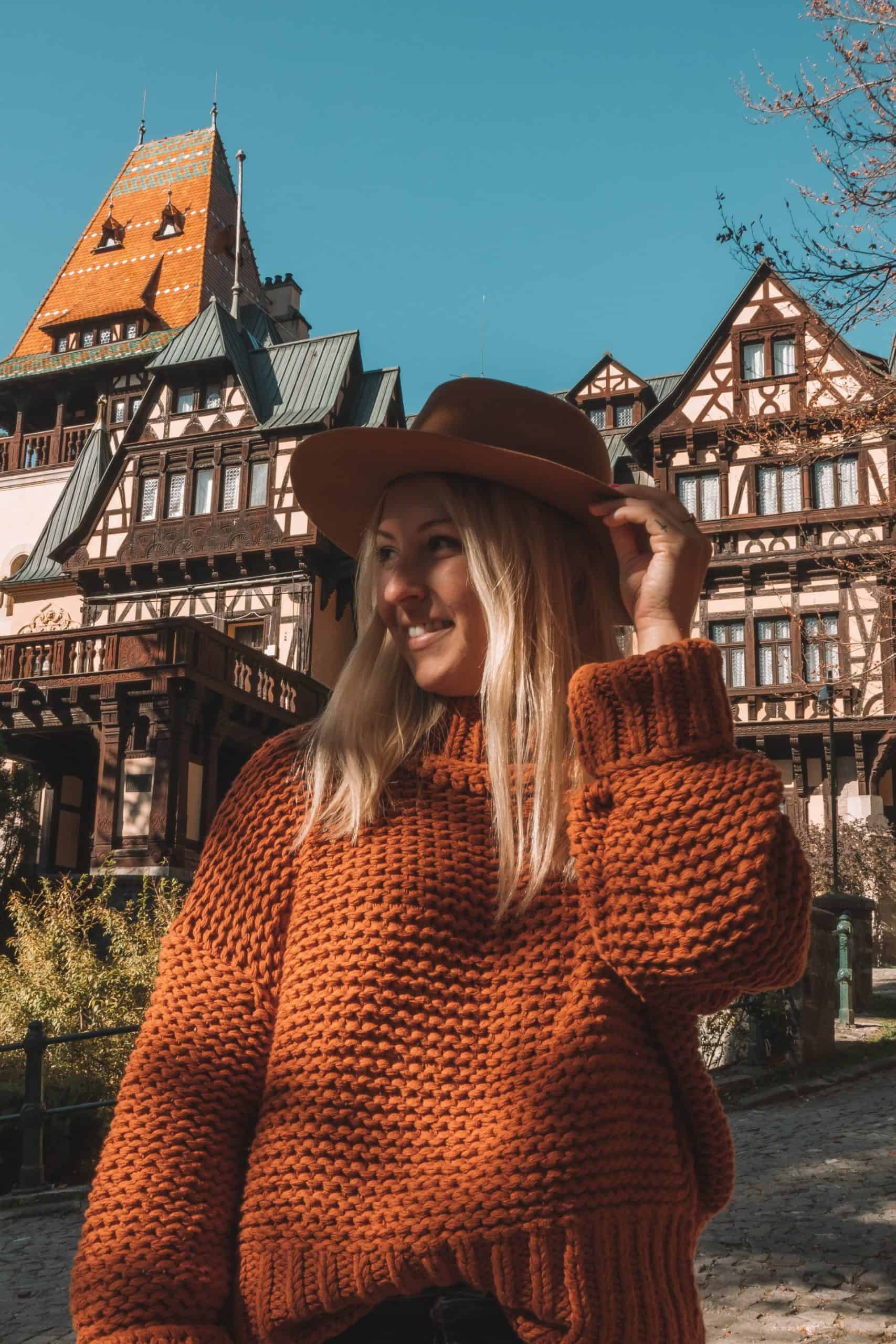 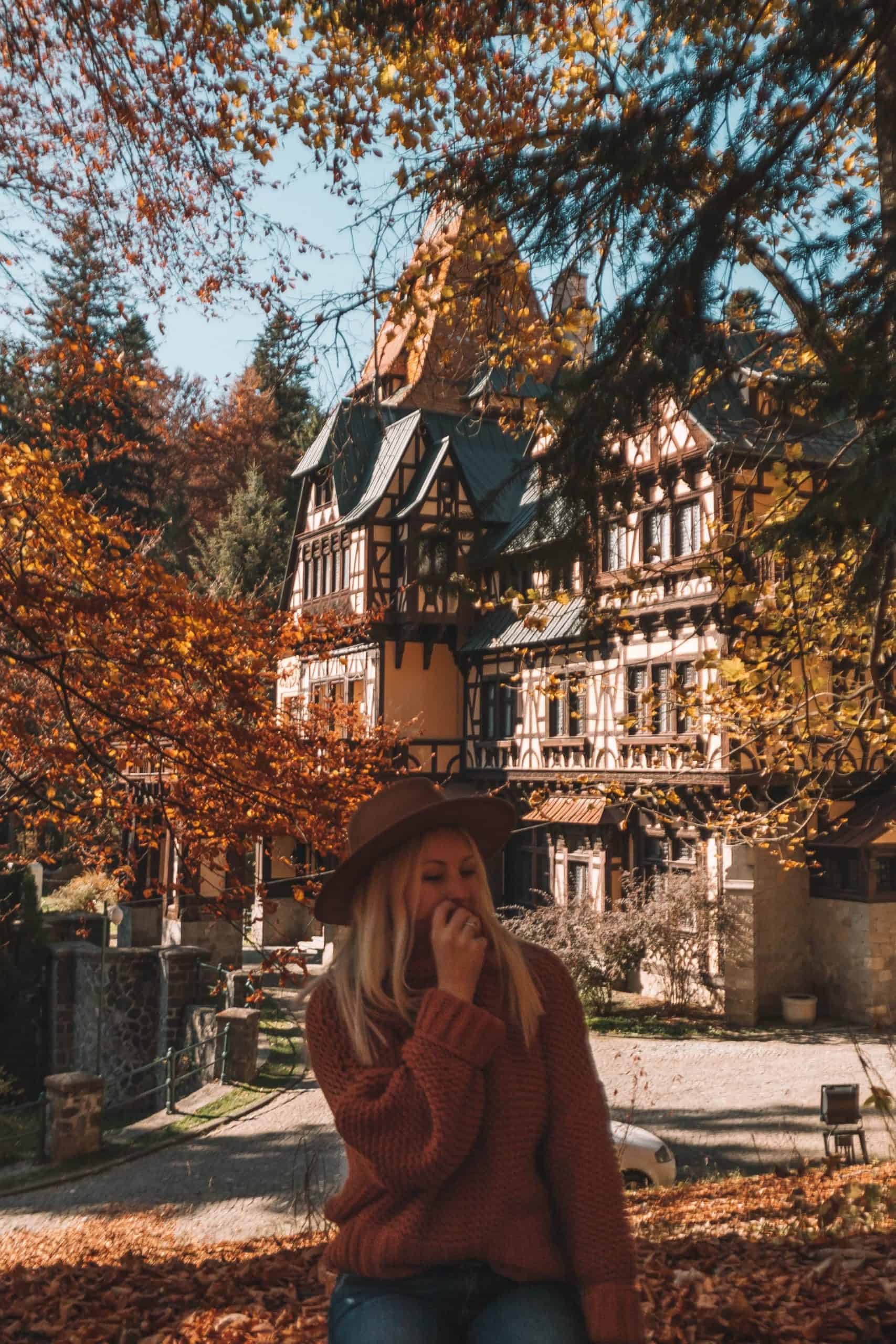 Next to Peleș, there’s also a smaller Castle, Pelișor that is worth visiting if you’re in the area.  King Carol I ordered Pelișor to be built for his nephew Ferdinand and his wife Marie who was set to be the future King and Queen of Romania.  The two Castles are within walking distance of one another. Transylvania is the region in Central Romania and where most of the magical places in Romania are found.  Transylvania is known for medieval towns, beautiful scenic drives through the Carpathian Mountains, towering Castles, and historic remains.  The best way to see it all is by hopping in the car and making a road trip of it.

For more information on planning a road trip through Romania, don’t miss these posts:

5.  Stroll the Cobblestone Streets of the Most Picturesque Villages in Romania – Sighișoara 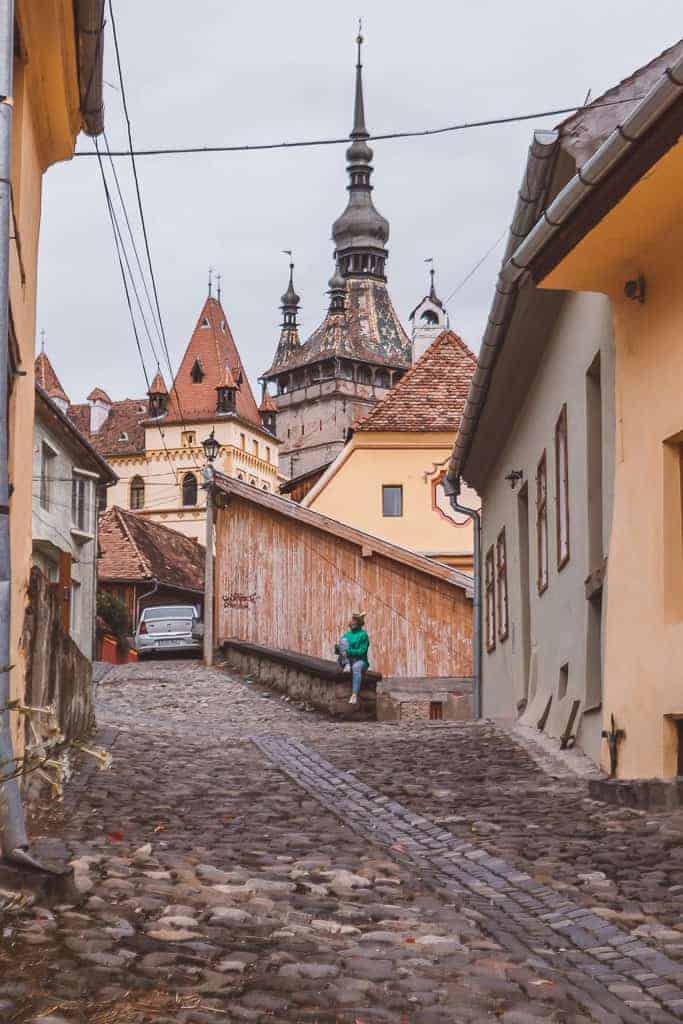 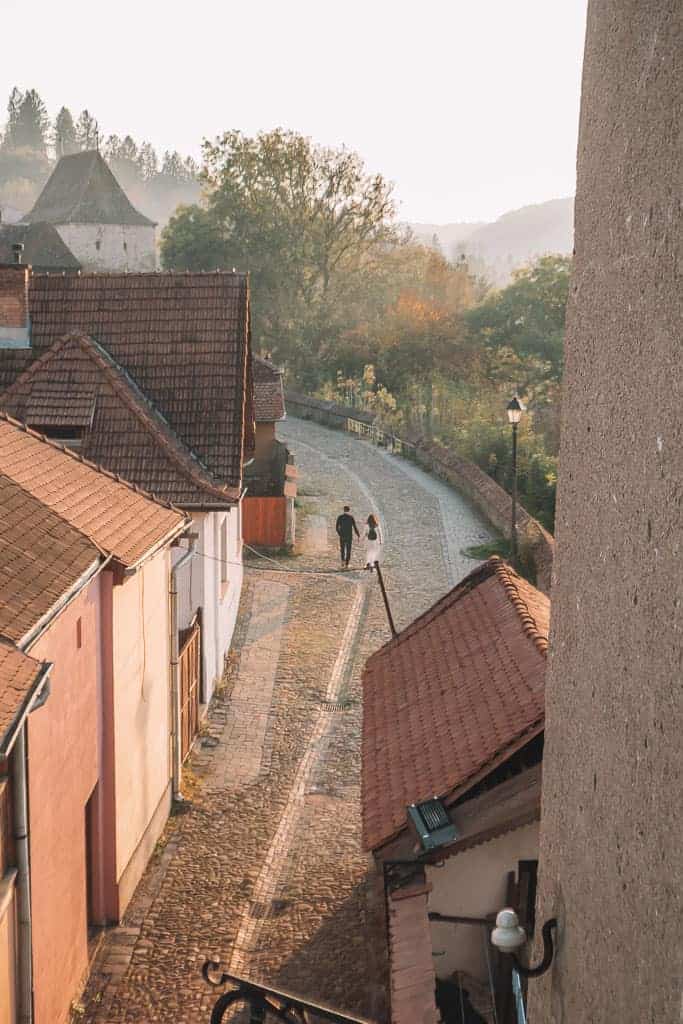 Sighișoara has to be one of the most quaint and adorable towns in all of Romania.  Considered to be one of the most beautiful and well-preserved inhabited citadels in Europe, Sighișoara is made up of a small square with snaking cobblestone alleyways leading you to shops, bars, and restaurants.  It’s an idyllic place to spend an afternoon in, and while you can certainly see it all in a matter of hours, I encourage you to slow down and take your time here.  Make sure to walk to the top of the Sighișoara Citadel for views over the city and perhaps spend time in the 500+-year-old wine cellar at Teo’s.

Read more:  The Best Places to Visit in Romania – 4 Fairytale Towns You Can’t-Miss 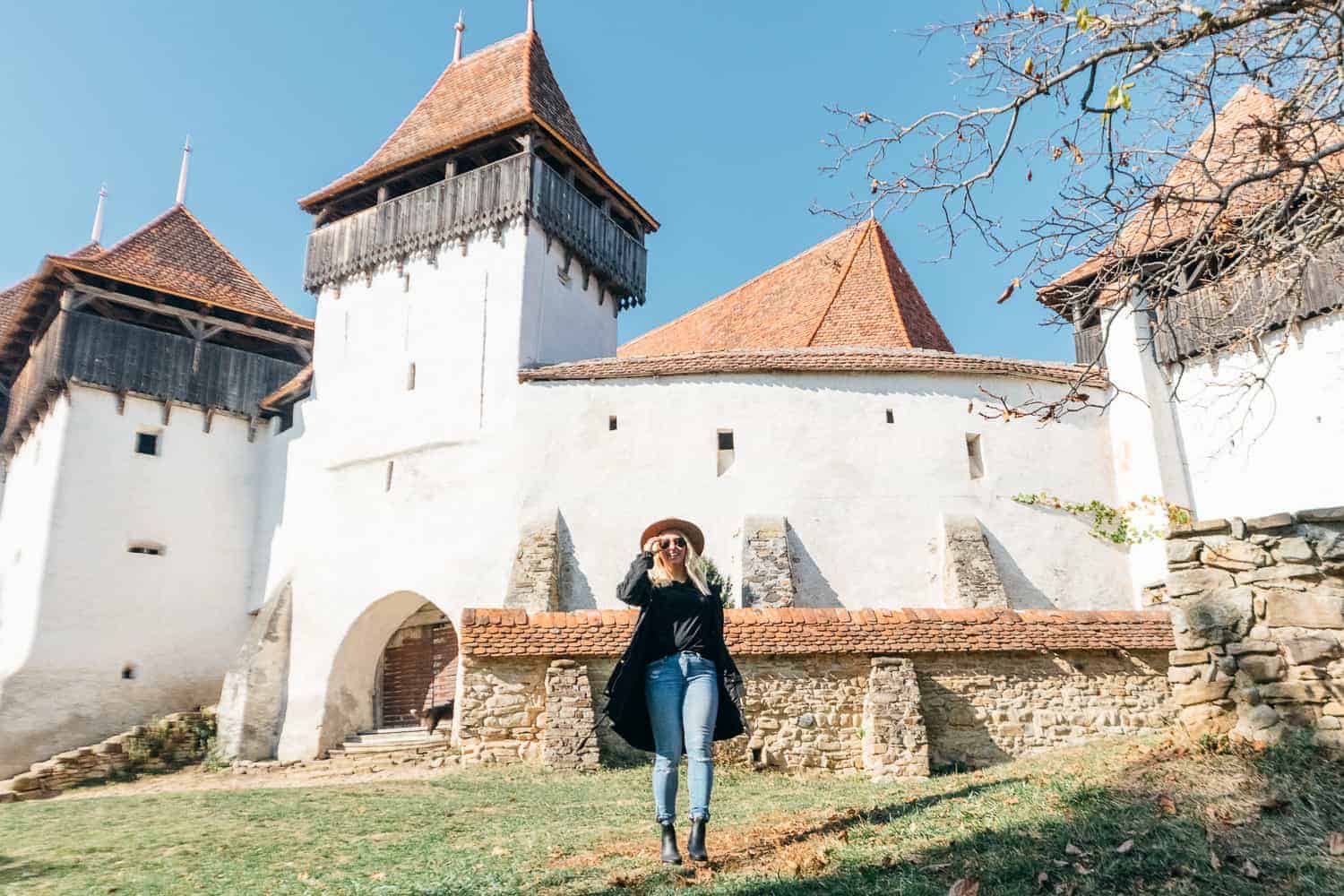 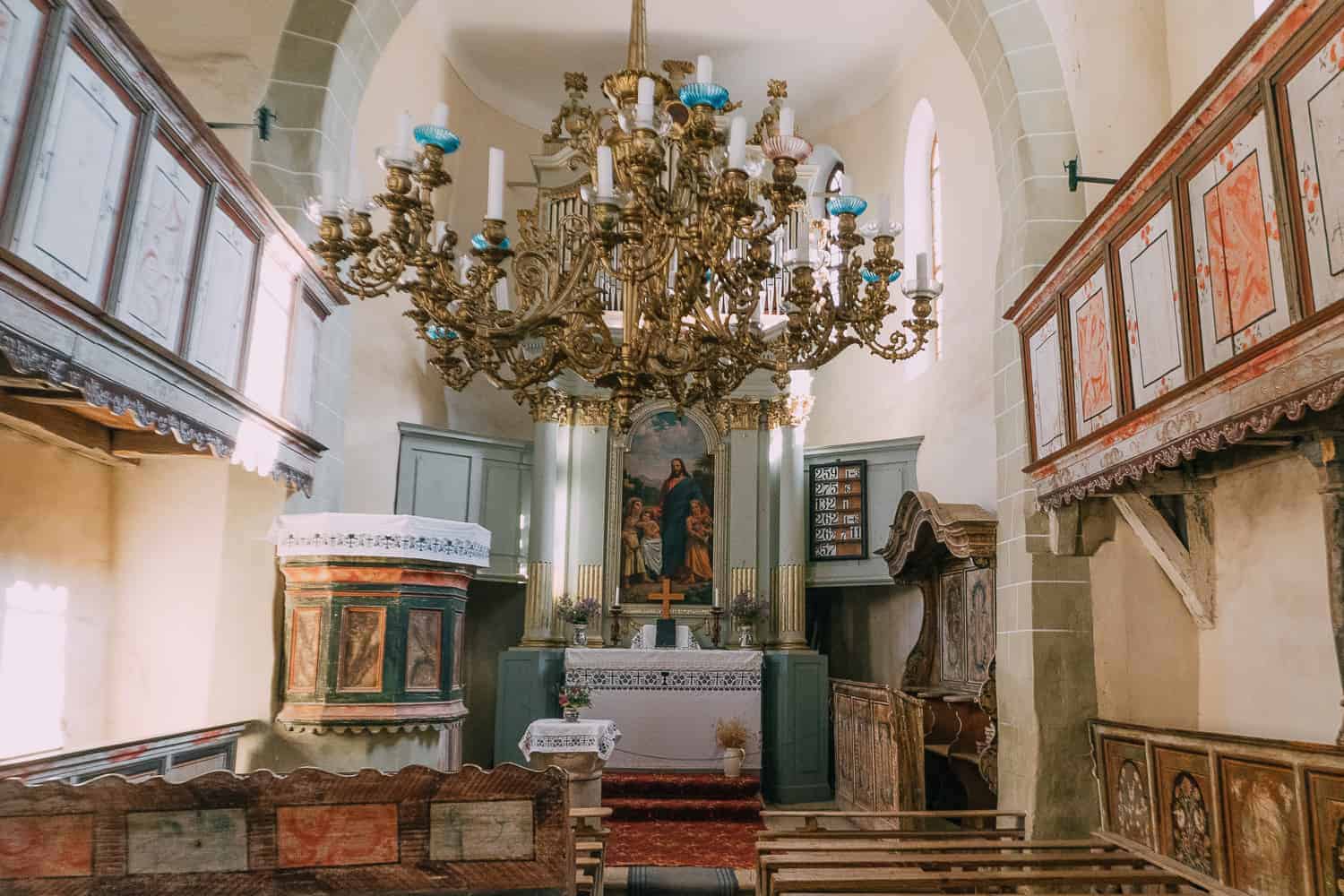 Viscri is a town that’s inhabited by 450 people.  It draws most of its visitors who are wanting to see the medieval and unique Viscri Fortified Church.  As you pull into Viscri, dirt roads will lead you into town.  You might get caught in a traffic jam due to cows and sheep freely crossing the streets, but you’ll get a true taste of the Romanian countryside right before you pop into a town of colored homes, shops, and of course the Viscri Fortified Church.  The Viscri Fortified Church forms part of the villages with fortified churches in the Transylvania UNESCO World Heritage Site.  To this day, church service is held once per month and the people in town gather to worship.

Entrance into the church is 5 Lei and if you find yourself driving there is free street parking right outside.  Also, make sure to check the times before going, the church is closed from 1 pm – 2 pm every afternoon.  Hours of operation are 7 days/week from 10 am 1 pm and 3 pm – 6 pm. Papanași is a traditional Romania dessert that can be found throughout the country.  It’s a fried or boiled pastry, shaped like a donut with a small circle (or what is referred to as a donut hole) on top.  Traditionally the pastry is filled with a soft cheese such as urdă and topped with sour cream and jam.

8.  Walk to the Top of the Râșnov Fortress 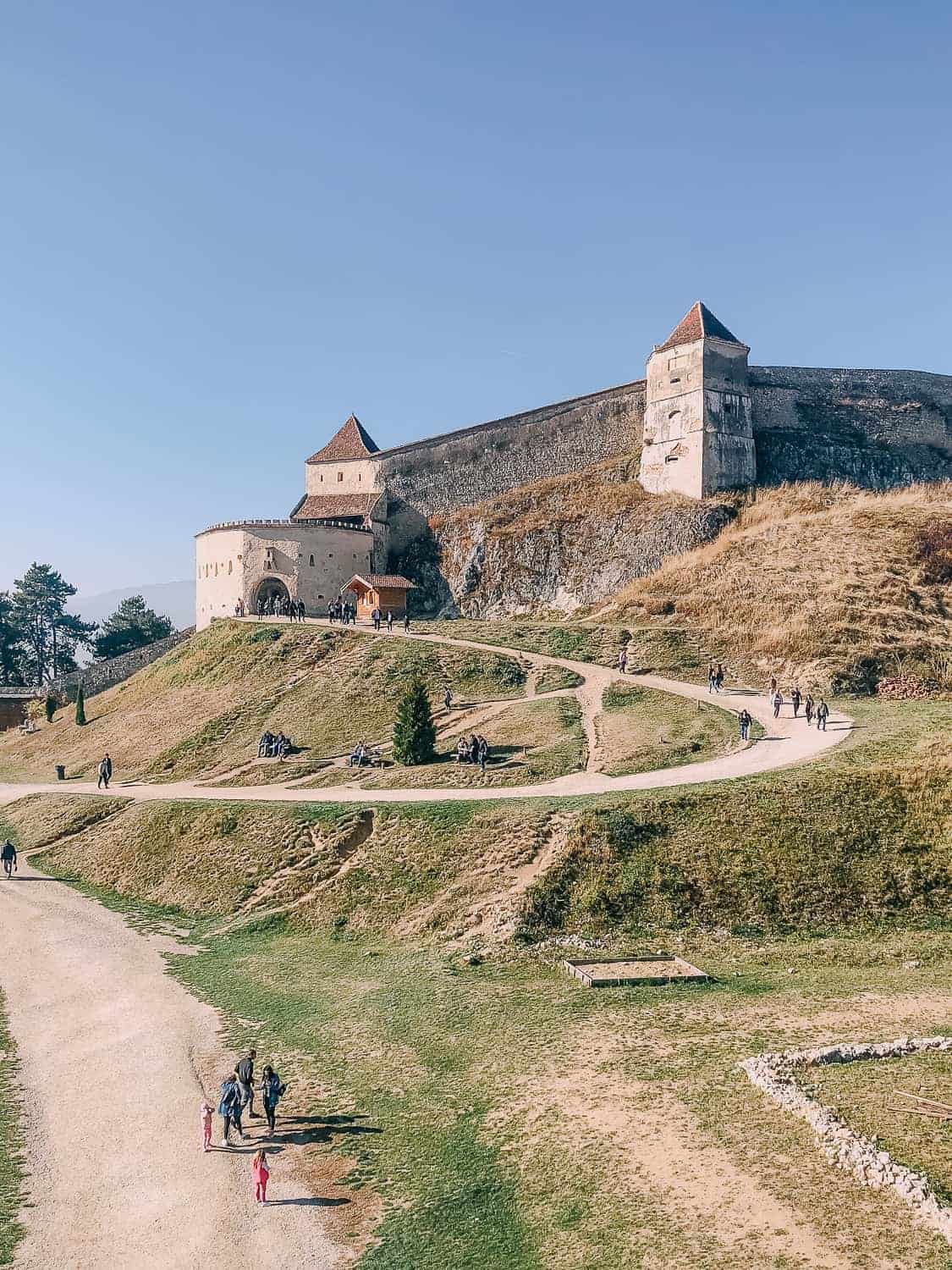 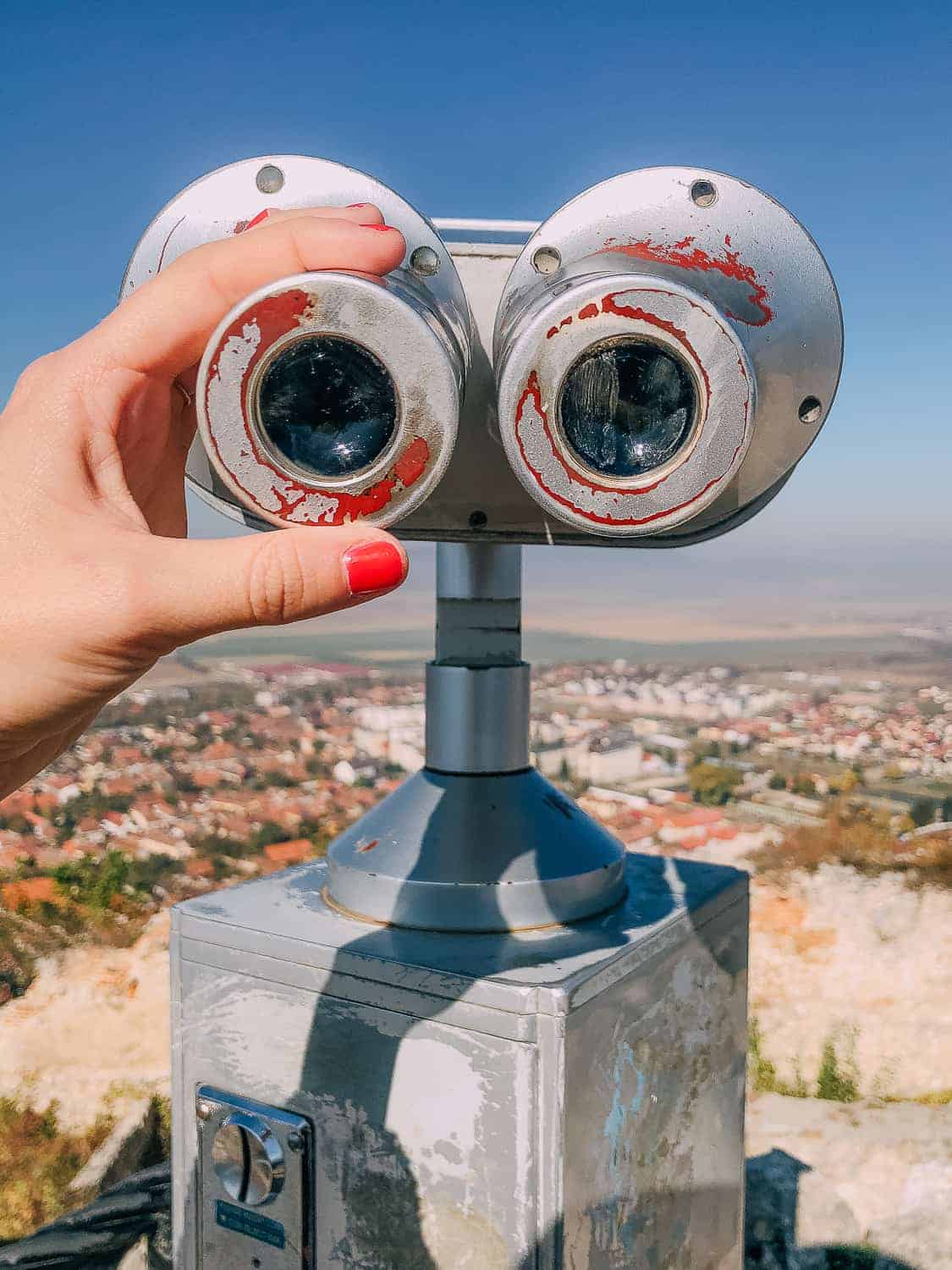 The Râșnov Fortress is a large, stone fortress, that was built between 1211-1225 to keep the small villages of Transylvania protected from unwanted visitors.  It’s located near Bran Castle, so if you’re visiting one or the other you should take the opportunity to visit both. Parking is free, but you’ll have to walk up the hill to the fortress and purchase a ticket to enter.  The fortress is open 7 days/week from 9 am – 7 pm. 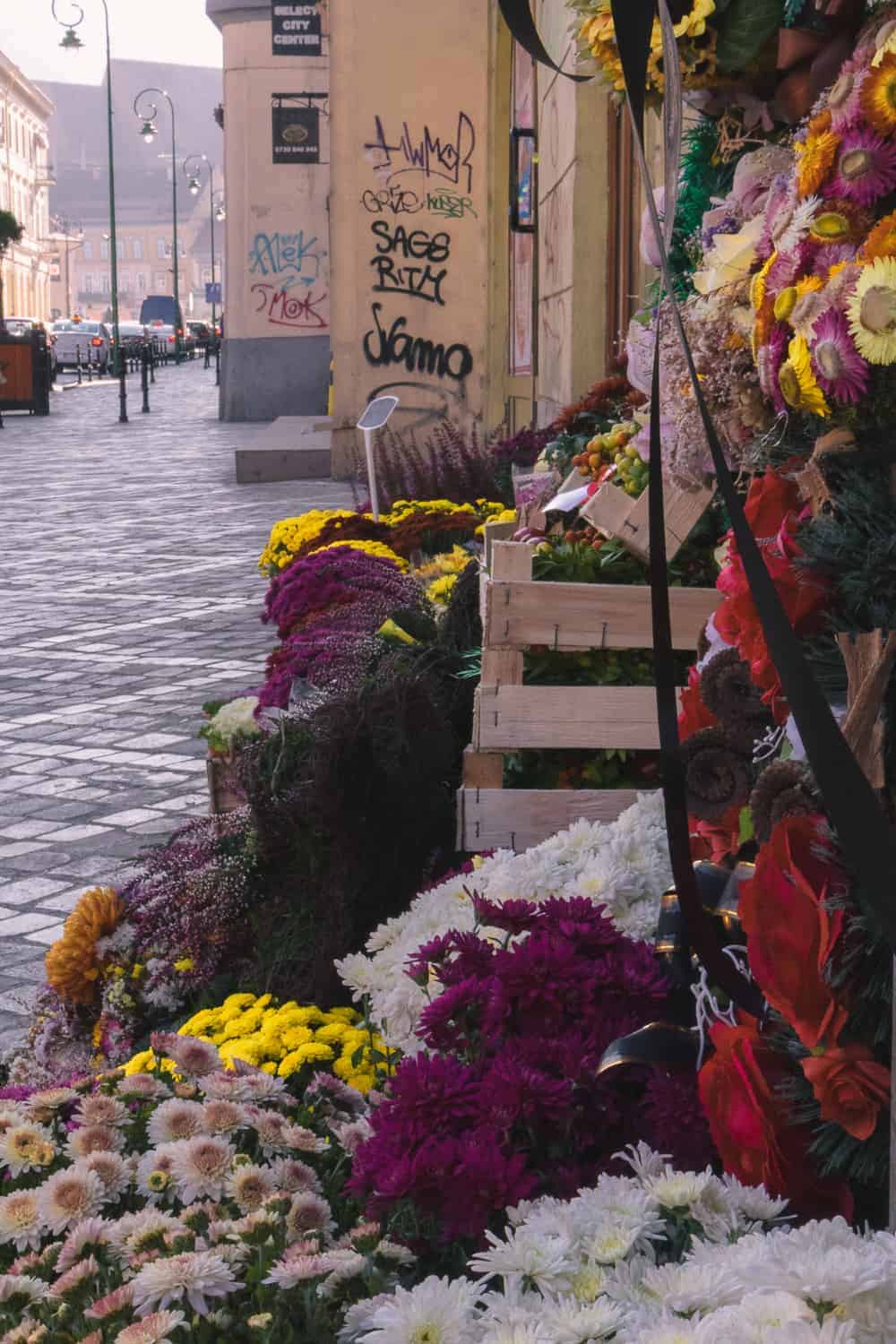 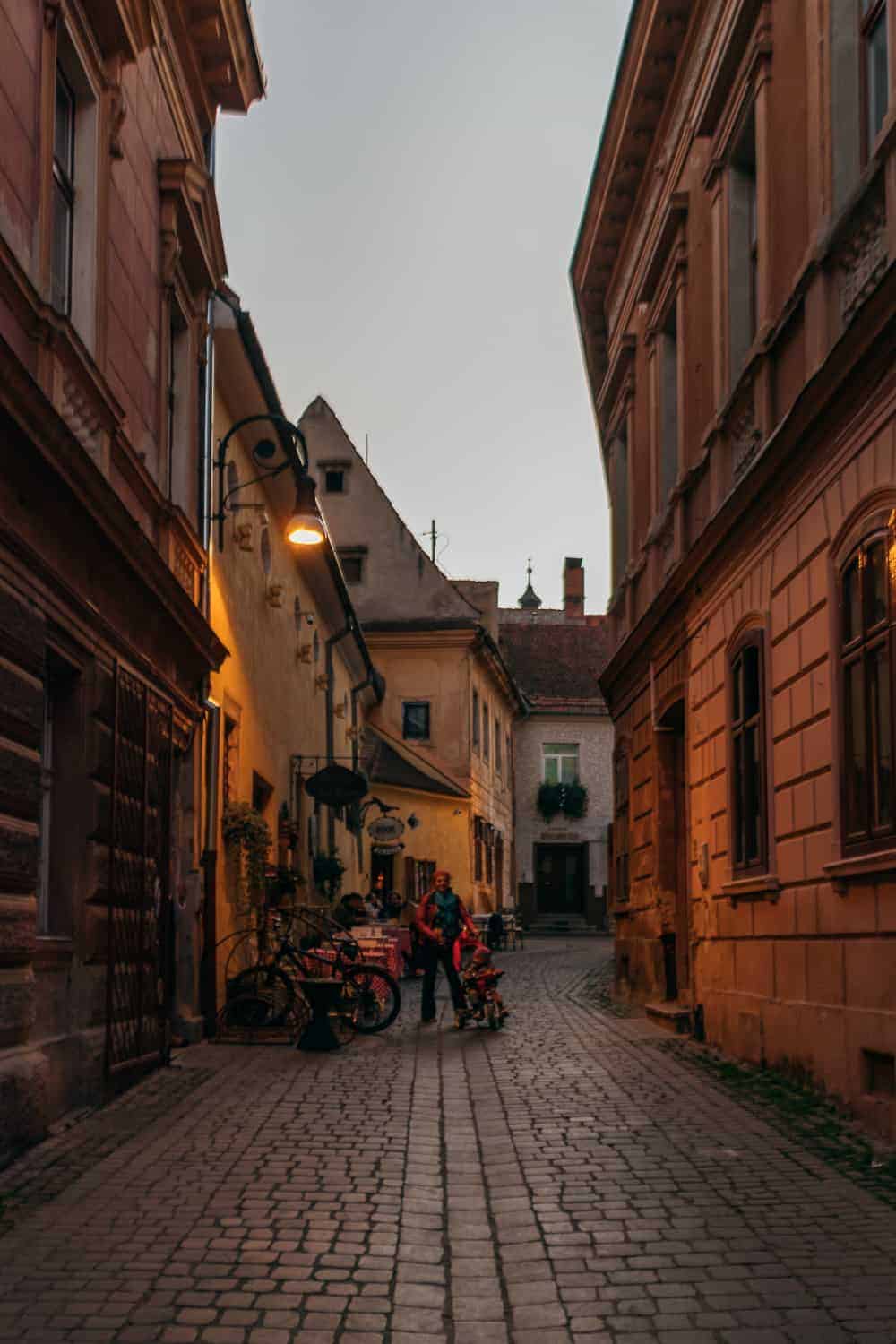 Brașov is oftentimes referred to as “the most romantic town in Romania”.  It’s a medieval town that is enveloped in the Carpathian Mountains, where cobblestone streets lead the way to colorful and cheery storefronts.  At every corner, cafés line the sidewalks and you’ll observe both locals and tourists alike indulging in tasty cuisine and sipping on cocktails.  Big old churches and clocks are seen high above the storefronts, always guiding you through town.  Of all of the places to visit in Romania, Brașov should be high on your list.  Quintessential Romania, you won’t get a true taste of Transylvania if you opt to skip Brașov.

For more information on visiting Brașov, read:  How to Visit Brașov in 48-Hours 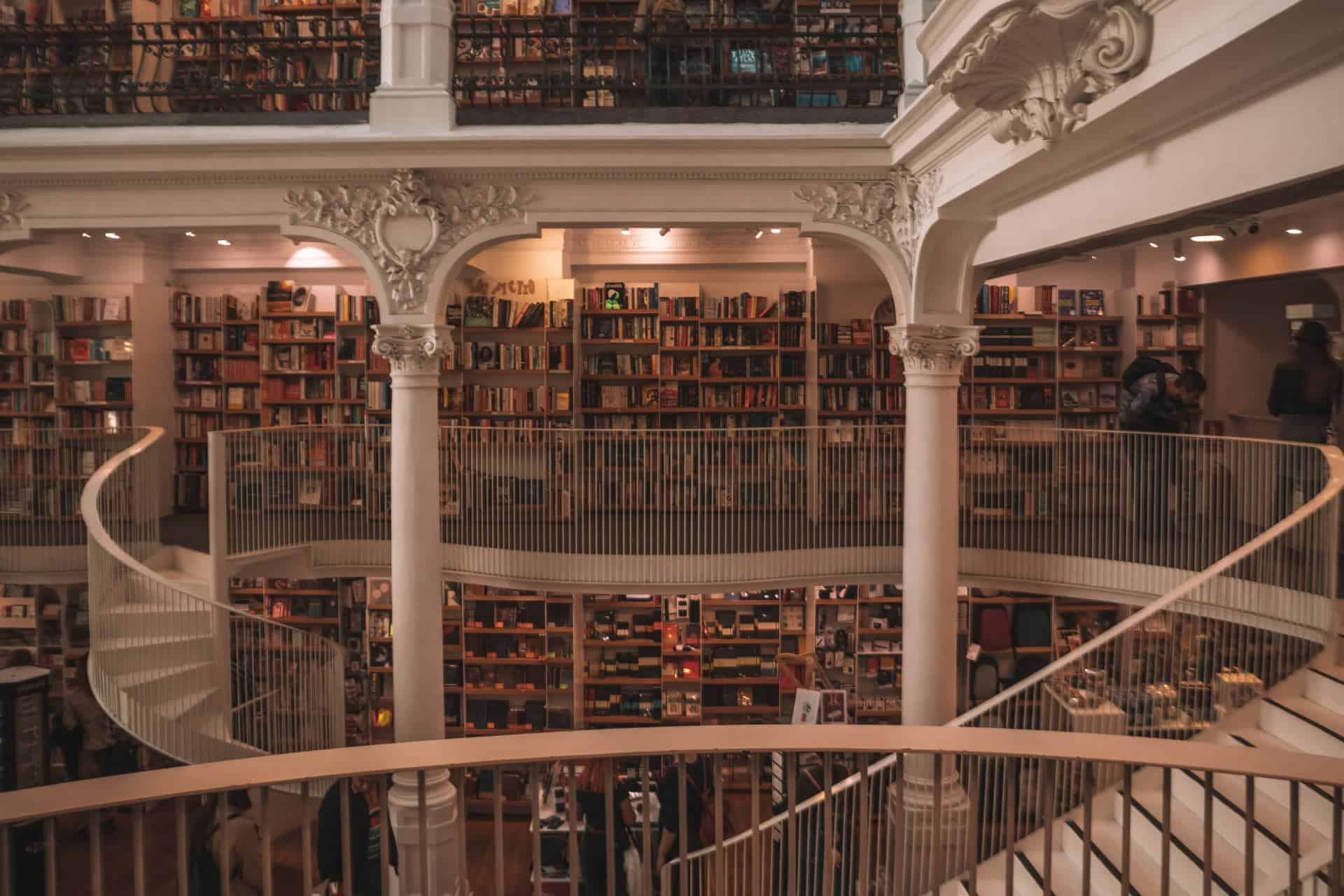 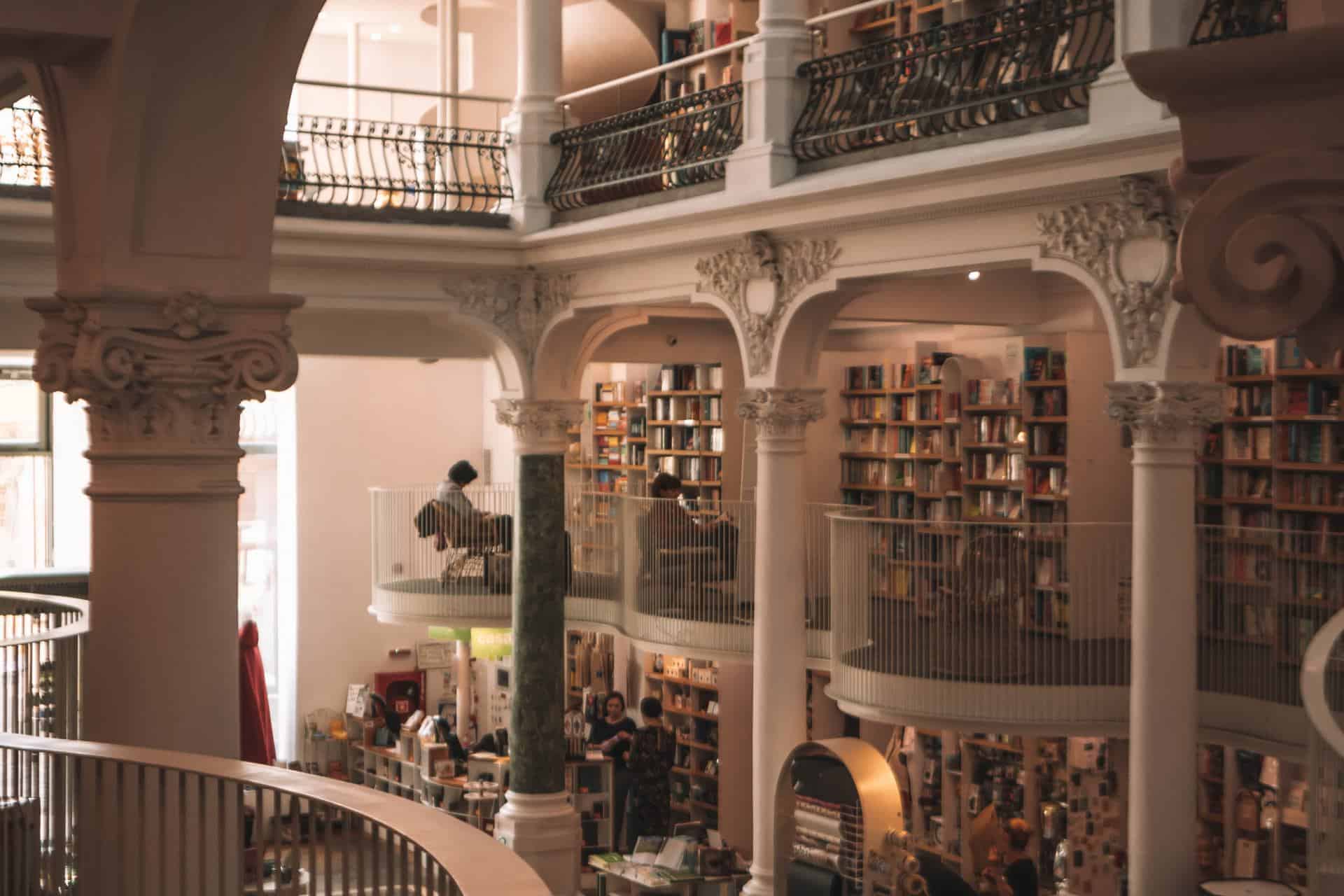 Located in Bucharest, Cărturești Carusel (“Carousel of Light”) is one of the most famous, ornate, and beautiful bookstores in the world.  It was originally built in 1903 by a Greek family, only to be taken away by the Communist regime in the ’50s.  After many legal battles, in 2007 it was finally given back to the grandson of the family it originally belonged to.  The grandson has transformed Cărturești Carusel into the bookstore it is today, one that’s easy to spend an afternoon getting lost in the many books offered in store.

Romania has always and will always be one of my favorite destinations in Europe.  With Castles to visit, medieval towns to explore, and incredible scenery along the way, there are tons of things to do in Romania.  I just hope that you give it a chance. 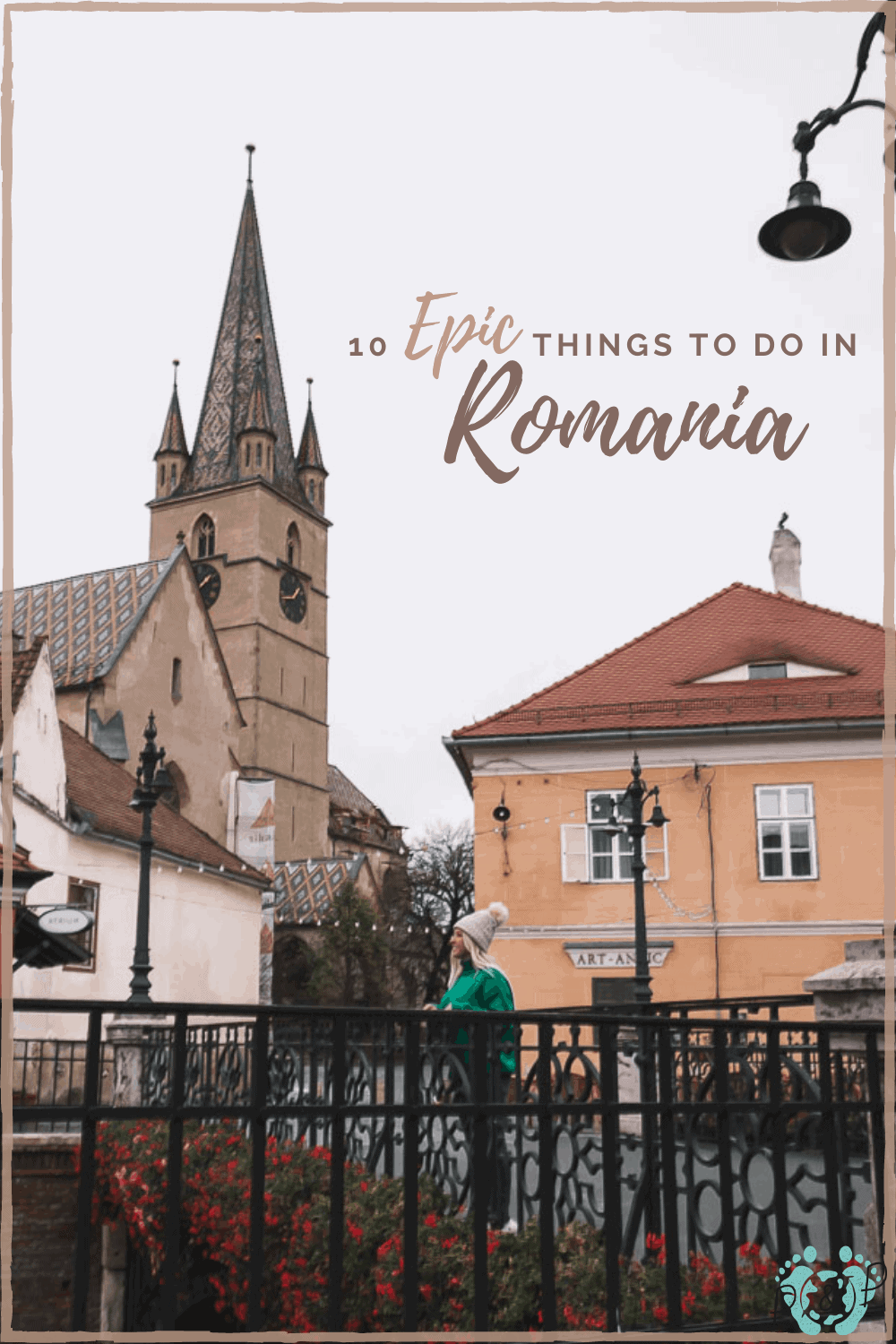 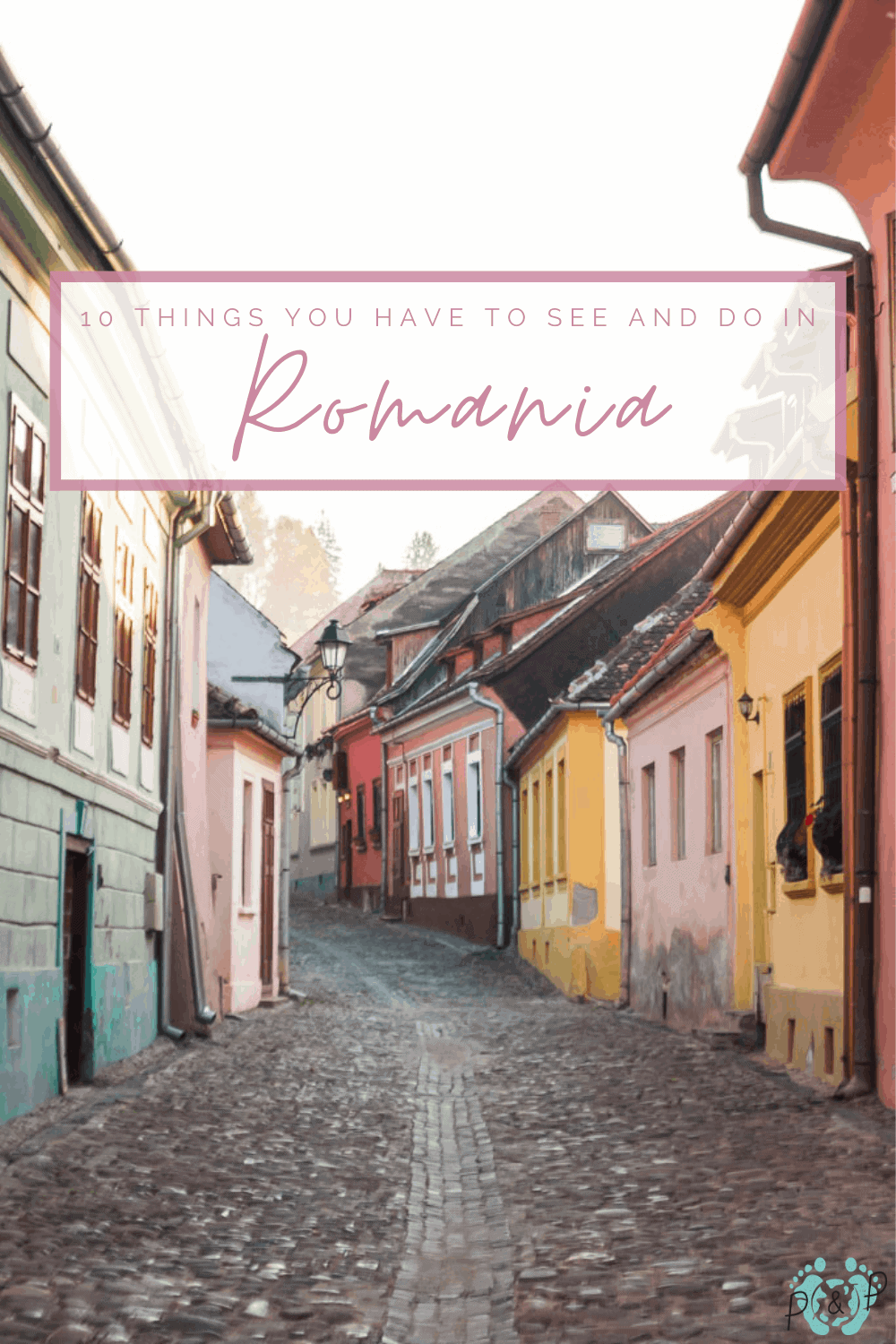