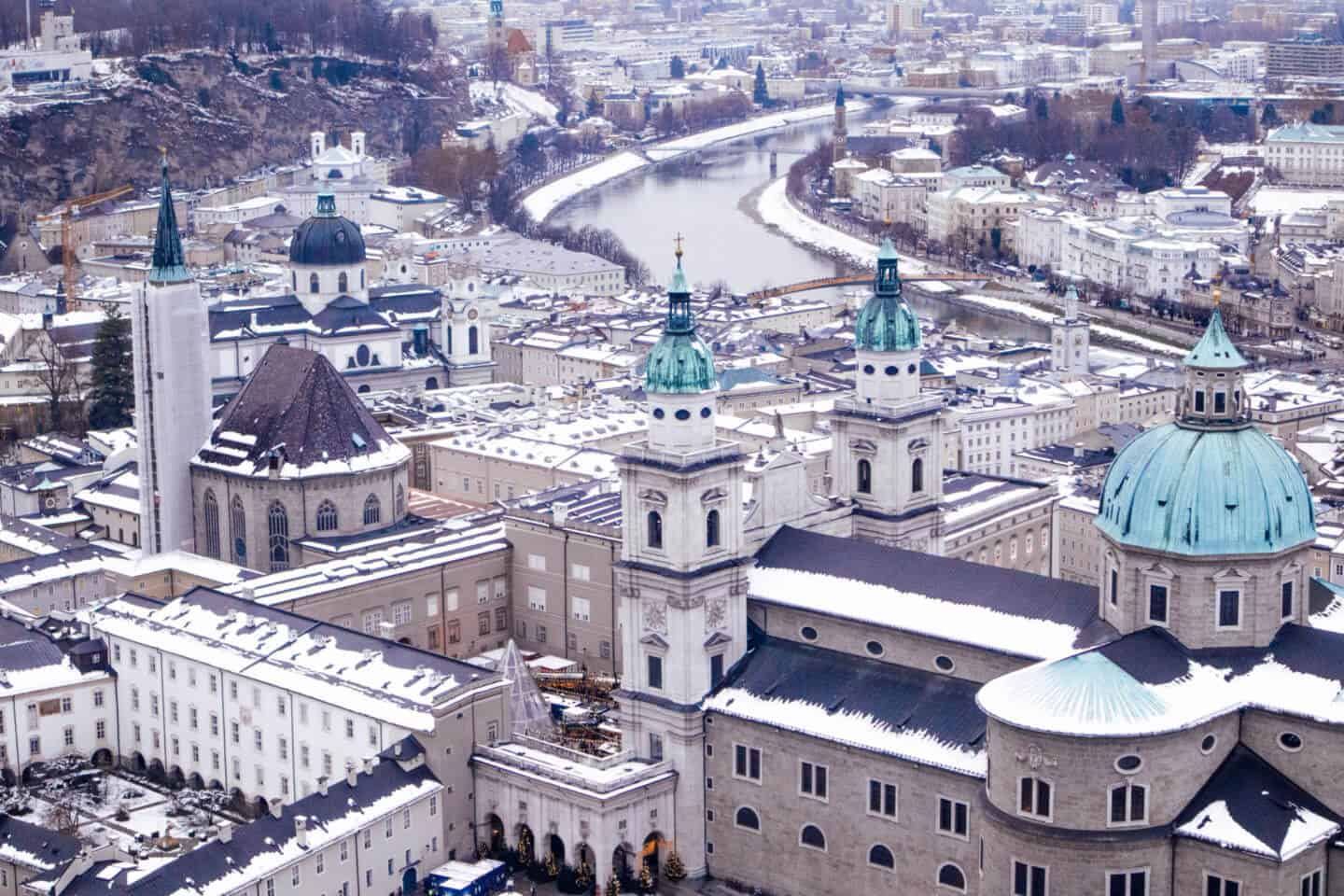 I had just licked my plate clean of my first wiener schnitzel.  Thinly pounded veal, lightly fried, topped with freshly squeezed lemon, and dipped in a bright red, slightly sweet, cranberry sauce.  I took a swig of my beer, sat back, and seriously thought about unbuttoning my pants.  I thought, “I am spending 24 hours in Salzburg, one of the most picturesque places I’ve ever been.  How did I get so lucky to be here”?  Followed by, “And why did I avoid wiener schnitzel for so long?”

As the train screeched to a halt at Salzburg Hbf, I had butterflies in my stomach.  I had just come from Venice and spent six hours winding through the Alps up north to the town where Sound of Music was filmed. I had moved from the land of water canals to Salzburg, a snowy mountain town in Western Austria.  Every time I glanced out the window I was in awe of what I saw. I felt like a child, giggling and smiling, at nothing in particular!

How to Spend 24 Hours in Salzburg

As I arrived to Salzburg, I stepped off the train and into the below-freezing weather, light snow blanketing the earth.  I was in a town that I had seen in the movies when I was growing up, (Salzburg is where the Sound of Music was filmed), and here it was laid out right before my very eyes.  I dropped off my luggage and set off to explore.  Whilst Salzburg is a charming little mountain town, you truly don’t need much time to see it all. One to two days will suffice, and in this case, I’ll be highlighting the very best that Salzburg has to offer in a 24-hour period.  So, here is how to spend one day in Salzburg!

Spending the Morning in Salzburg Begin your day in Salzburg by starting outside of the city center at Coffee Press.  Grab a coffee to go and head outside to St. Sebastian’s Cemetery.  St. Sebastian’s Cemetery came to fruition in the 16th-century, and it’s where many royals and members of the Mozart family are buried.  While I wouldn’t go out of my way to visit the cemetery, it’s worth it to drop by if you’re in the area or if you’ve grabbed a coffee at Coffee Press; plus entrance is free.

Aside for being famous for being the place where the Sound of Music was filmed, Salzburg is also famous for being the birthplace of Mozart.  Whether or not classical music is your thing, Mozart and his family are of great significance in the city.  Make sure to visit Mozarts-Wohnhaus to see where Mozart grew up and historic artifacts that are dedicated to his life.  The entrance is only 11€.

Once you leave Mozart’s house, stroll down Linzergasse towards Kapuzinerberg.  Kapuzinerberg is a hill on the east side of the Salzach River; climb up before the sun reaches its peak to see the entirety of Salzburg stretched out below.  One of the most breathtaking views in town, you’ll see mountains stretched out in front of you and the town below you.

Spending the Afternoon in Salzburg Once the sun reaches its peak, cross over Mozartsteg, a footbridge built-in 1903 that connects Old Town and Stone Lane.  Head in the direction of Residenzplatz in Old Town where you’ll find many lunch options.  Dine at the oldest coffee house in Austria – Café Tomaselli.  Grab a relatively quick bite to eat at the laid-back UNCLE VAN, which serves Vietnamese food. Or sit back with a glass of wine and plate of charcuterie at Paninoteca Piccolo Mondo.

Next, had to Getreidegasse to walk off a bit of your lunch.  Getreidegasse is a UNESCO World Heritage Site, it’s where Mozart was born, and most importantly it’s where you’ll find the best shopping in Salzburg.

Spending the Night in Salzburg Before the sunsets buy a ticket to take the funicular up to Hohensalzburg Fortress.  This castle sits on a hill opposite of Kapuzinerberg but is much higher.  You can take your time and explore the old fortress, and even pay to view parts of the castle that are otherwise off-limits.  Personally, I feel as though you get the full effect of the castle by walking around, there is no need to pay extra.

After viewing the sunset over the city, take the funicular back down to town.  Head for a beer at one of the two beer gardens in the city – Augustiner bräu or Stiegl-Brauwelt.  Both popular spots that serve local, Austrian beer.

For dinner cross over another more famous bridge, Markartsteg, which is more commonly referred to as the “Love Lock Bridge”.  You’ll end up back to where you started your day near Linzergasse.  Head straight to Zum fidelen Affen – a traditional Austrian restaurant where I urge you to try the quintessential Austrian dish – wiener schnitzel.  Zum fidelen Affen gets busy, I recommend going early or making a reservation ahead of time. If you’re spending more than one day in Salzburg, make sure to check out Mirabell Palace and Gardens.  The Palace was built in 1606 by prince-archbishop Wolf Dietrich for Salome Alt.  Entrance is free and on a sunny day, I highly recommend popping by for a look at the beautiful gardens.

Visiting Salzburg was such a nice escape from what felt like reality.  A place that’s frozen in time, where everything is grand and beautiful.  While it’s much, much smaller than Austria’s capital – Vienna, I’m certain that it’s packed with just as much beauty and personality.  While 24 hours in Salzburg was plenty of time, I certainly hope to be back again in the future.  There’s one thing I can say with certainty, Salzburg is a place that I’m glad I didn’t pass over for a bigger and more common destination.

For more on my time in Salzburg, make sure to check out my Instagram story highlights by searching “Salzburg” or check out the IGTV that I made during my trip