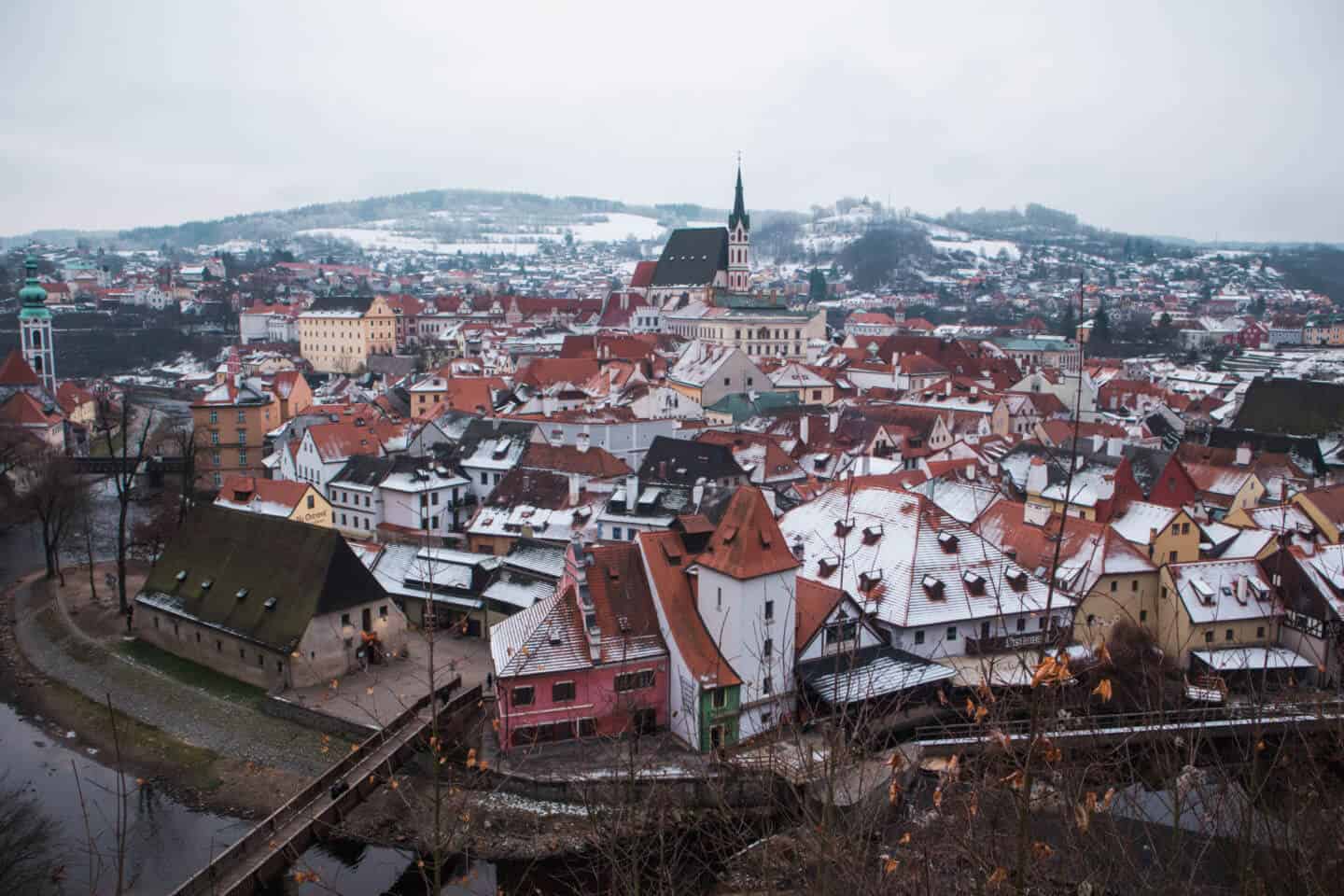 I felt an irrational fear as I was walking through the streets of Český Krumlov at nightfall. A breeze ruffled the leaves – I jumped.  A cat crossed in front of me – I screamed.  I scanned the streets noticing that I was all alone.  It was late – 9 pm – on a weeknight and by this time it had seemed that the restaurants and pubs had already closed shop for the night.  Walking alone at nightfall through an unfamiliar town was just the shock I was looking for to put me on my toes and get me out of my comfort zone. 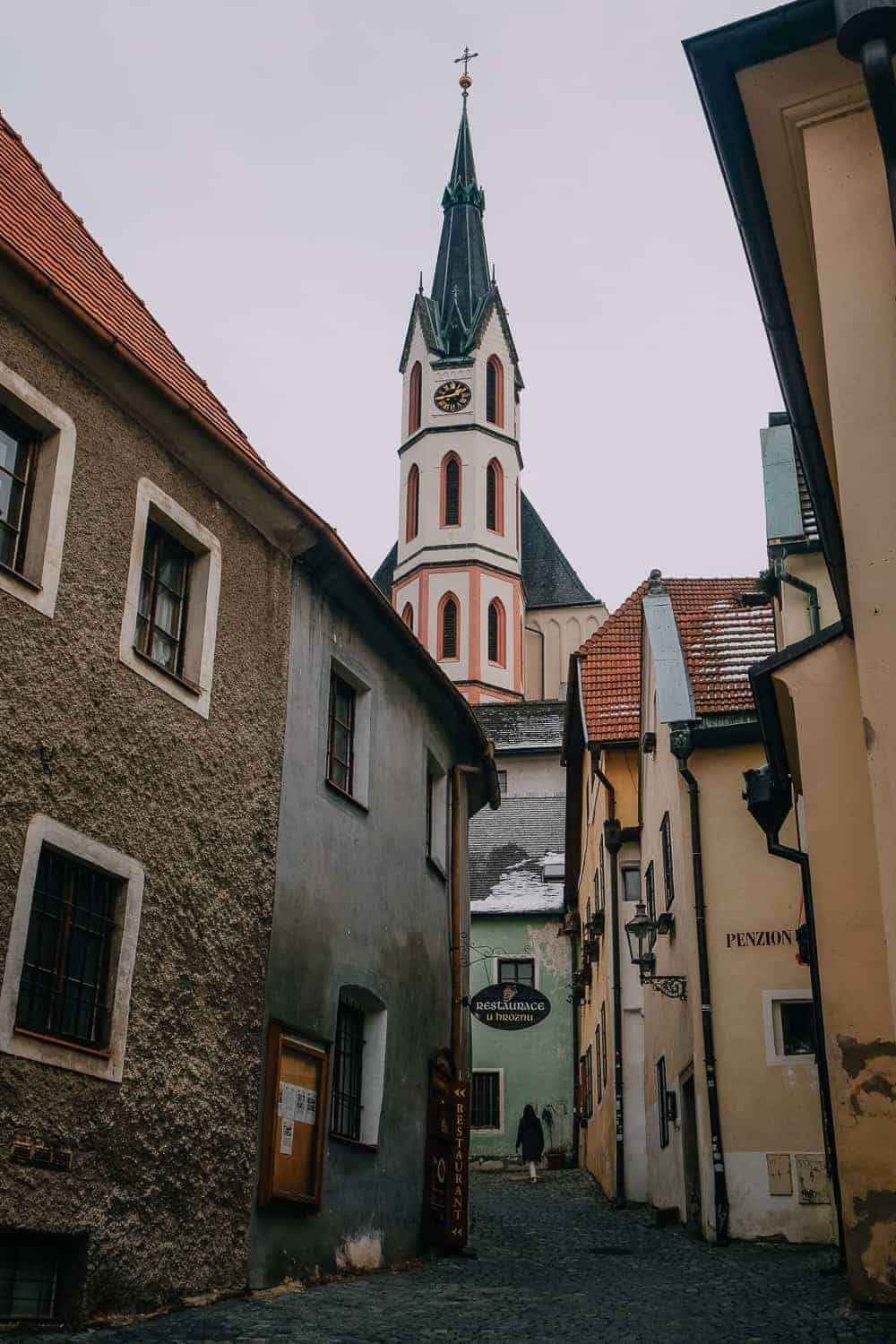 I arrived in Český Krumlov by bus from the quaint mountain town of Salzburg.  I heard about this charming European destination years ago and finally found a route that made sense.  It was the perfect time to stop as I crossed from Austria to Czechia to spend Christmas in Prague.  When I got off the bus, bitterly cold weather greeted me.  I wrapped my scarf tightly around my neck and drug my bag through the cobblestone streets on my way to my Airbnb.  With sparse streetlights, the moon guided me as I crossed over the Vltava River on my way out of old town… 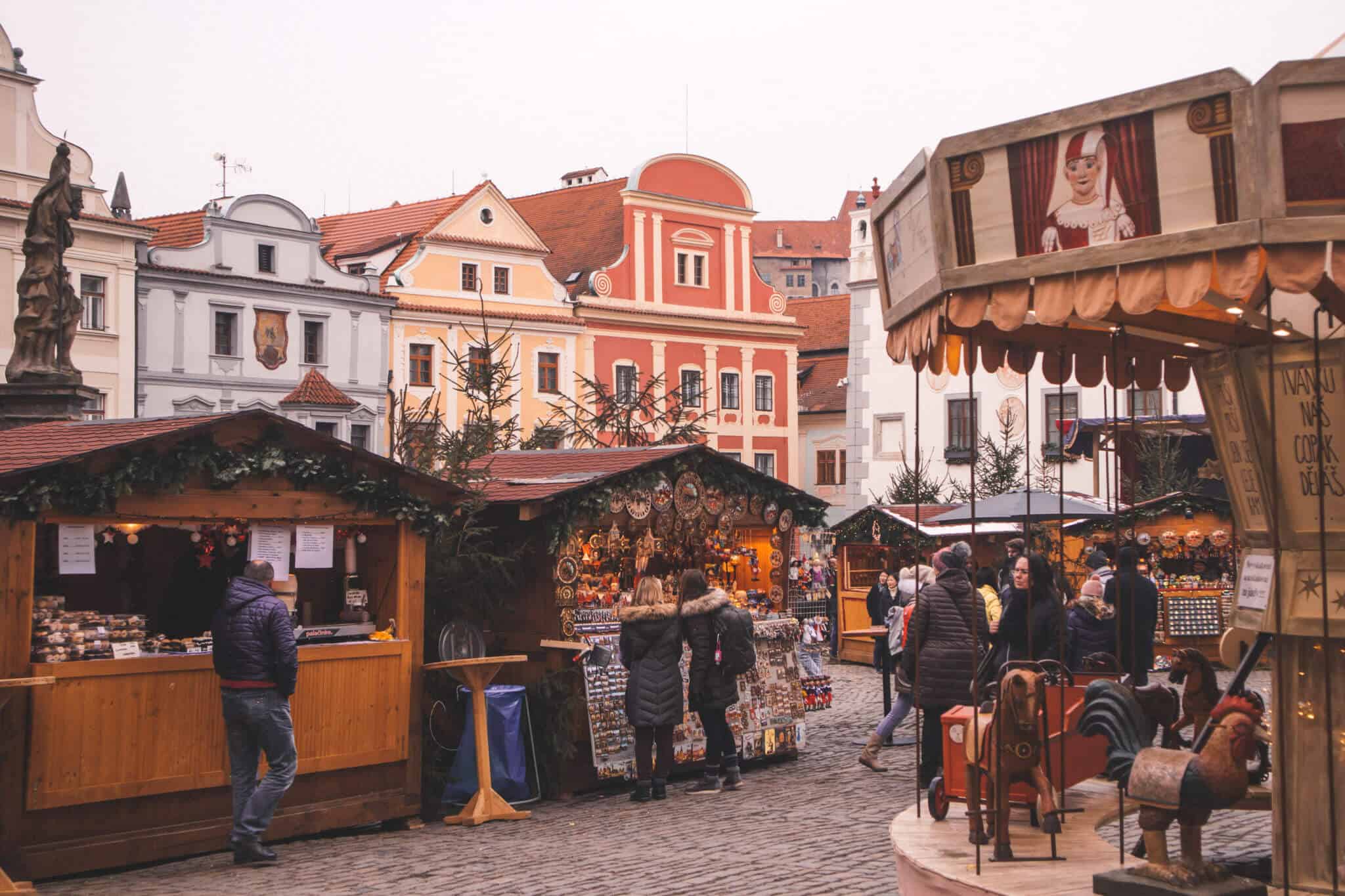 What I found most shocking about Český Krumlov was the true sense of a town that hasn’t lost its originality.  I’ve visited my fair share of small towns boasting to be unique and medieval, which couldn’t be further from the truth.  The truth is, many places around the world have seemed to lose a touch of originality as they begin to cater to tourists.  McDonald’s are placed in old towns, Starbucks is found on the street corners, and as the tourists roll in and the money goes up, the more kitsch and less original these towns seem to get.  However, that didn’t seem to be the case for Český Krumlov.  Here you won’t see any McDonald’s or Starbucks, instead, Český Krumlov has worked hard at retaining its originality.  The historic town center is a UNESCO World Heritage Site with its original layout preserved.  The town has seemingly remained untouched by the 19th-century industrialization, the devastating effects that World War II and the communist era had throughout Europe, and has retained a large number of historic details. 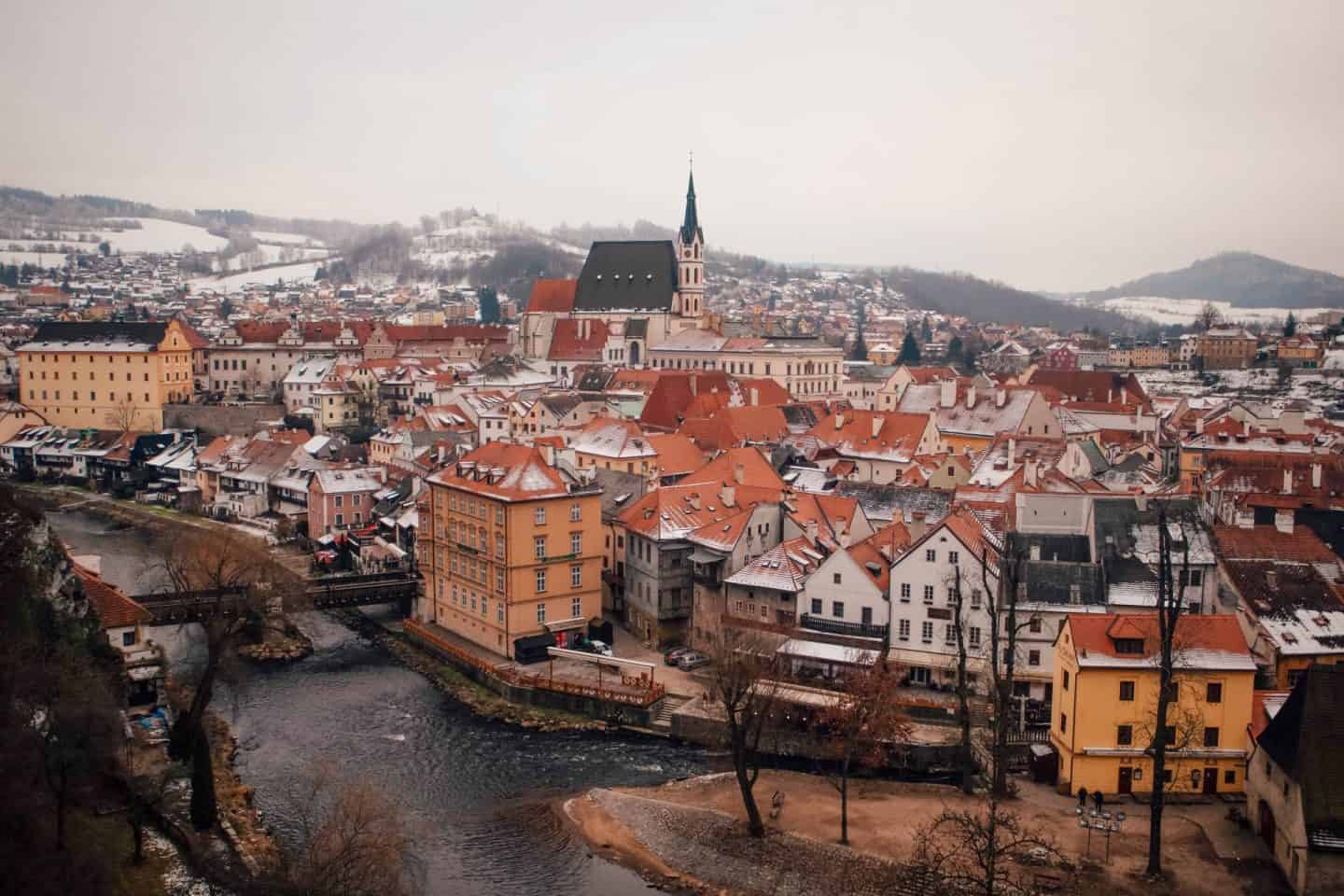 My few days spent in Český Krumlov were those out of a medieval fairytale book.  A town that was settled in as early as the 8th-century has somehow managed to retain the sense that it is in fact still the 8th-century.  I walked across bridges and through narrow alleys.  Always lost, but never panicked.  Popping into bars for a pint of beer, or the lovely Apotheka for a brilliant cocktail.  I got lost in the streets awing over the details of each building, and when I wanted to see the town from above, I climbed the hill up to Český Krumlov Castle and was struck with wonder at what was laid out before me. 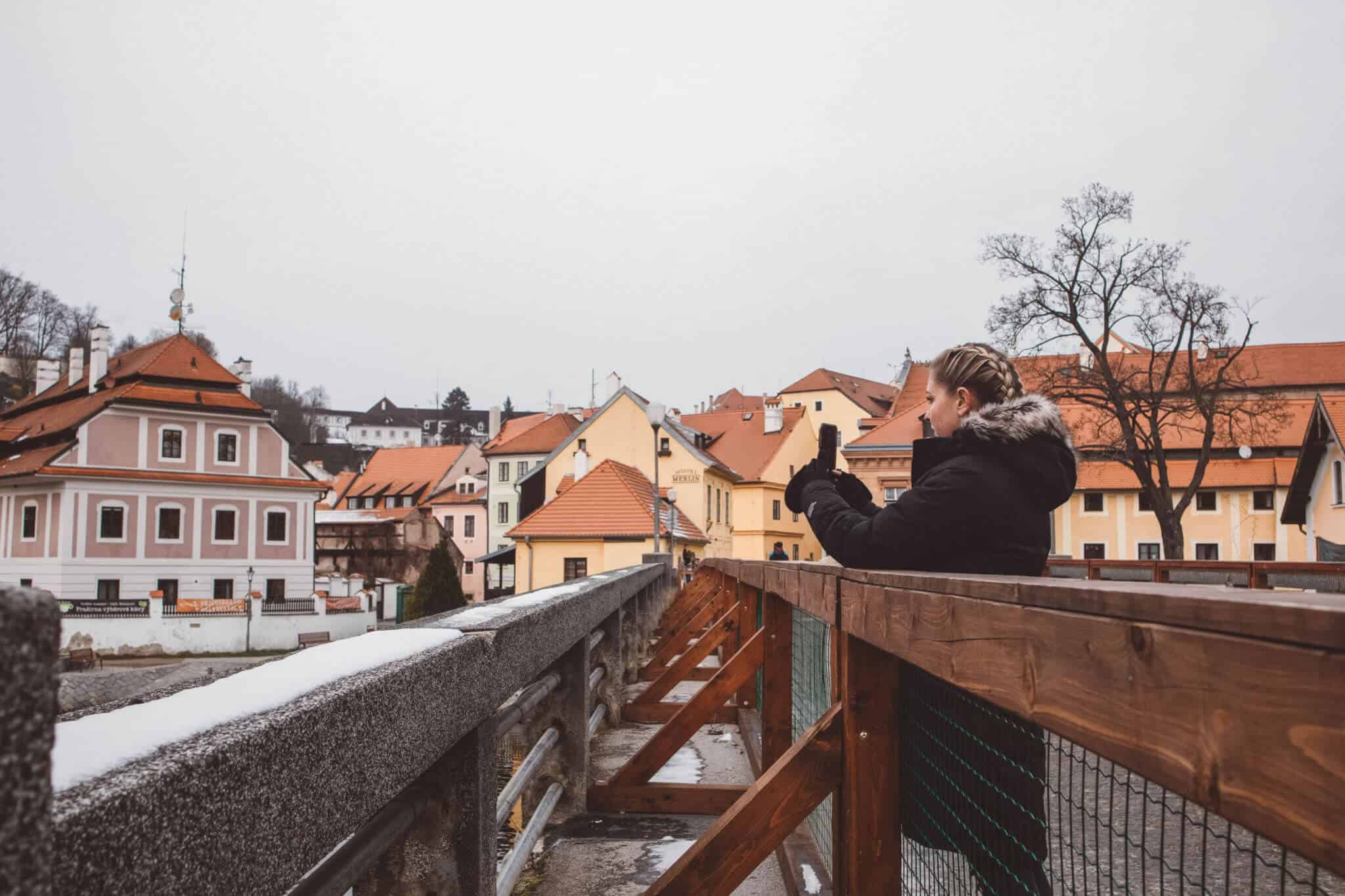 As of 2016, only about 13,000 people reside in Český Krumlov, which may be why it isn’t as well known as its counterparts in the Czech Republic – Prague, Brno, or Kutna Hora.  But what it lacks in people, it makes up for in charm.  And while you could make a point-to-day trip to this medieval town; I encourage you to make it a destination of its own accord.  A place that can be best felt if you choose to spend the night.  Take the time to slow in the Czech Republic, visit Český Krumlov. 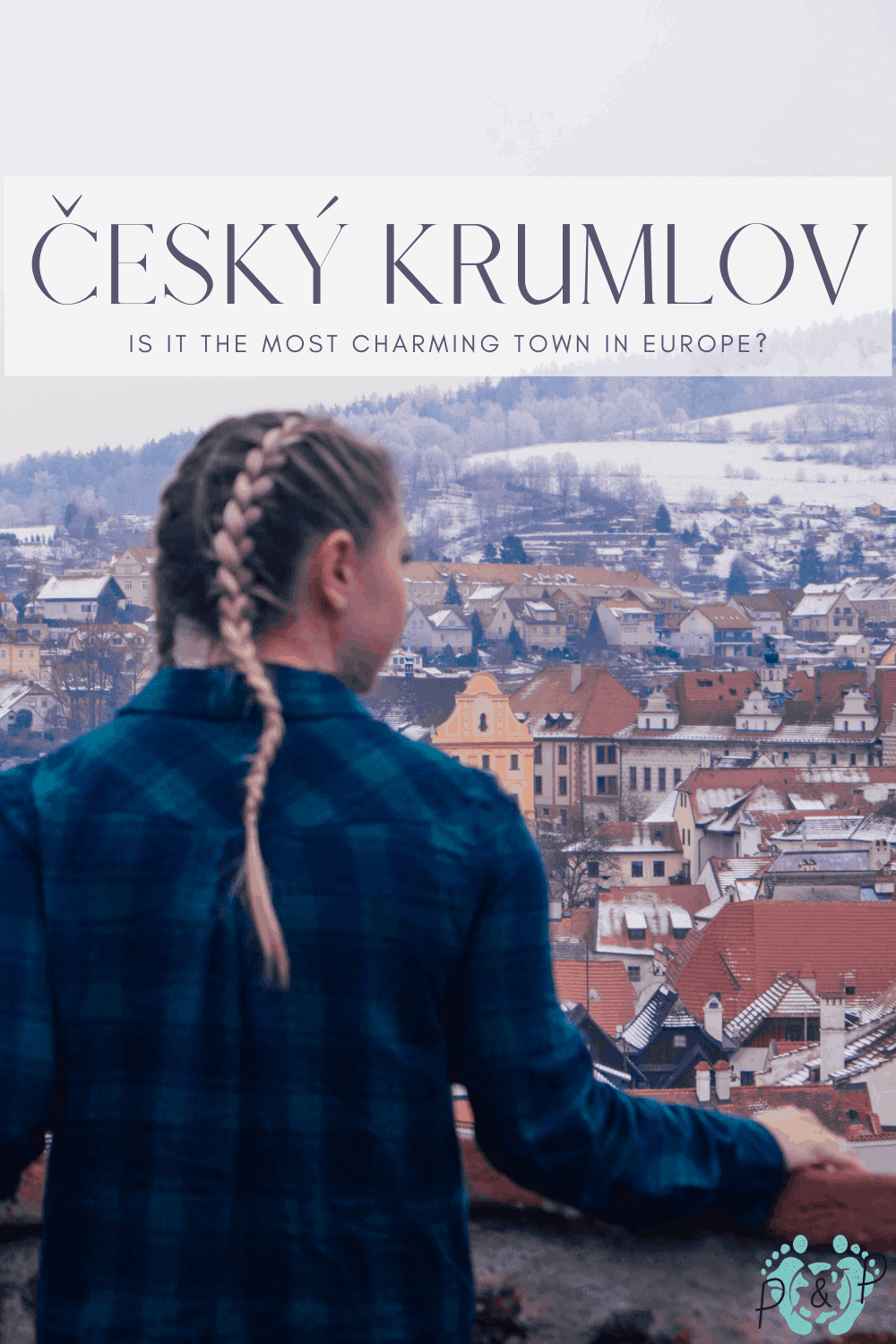 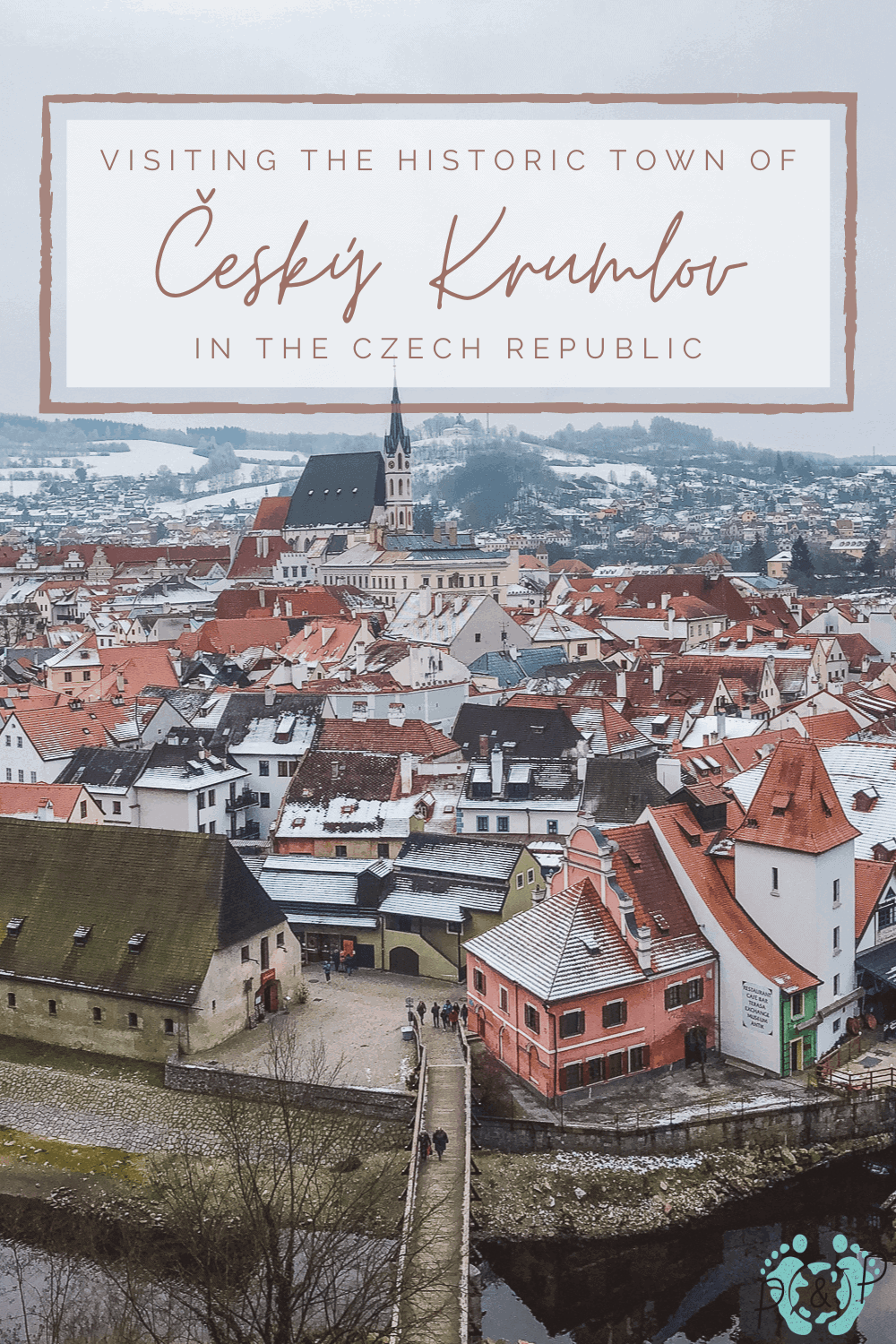 END_OF_DOCUMENT_TOKEN_TO_BE_REPLACED

How to Pick a Specialty When You’re in Nursing School