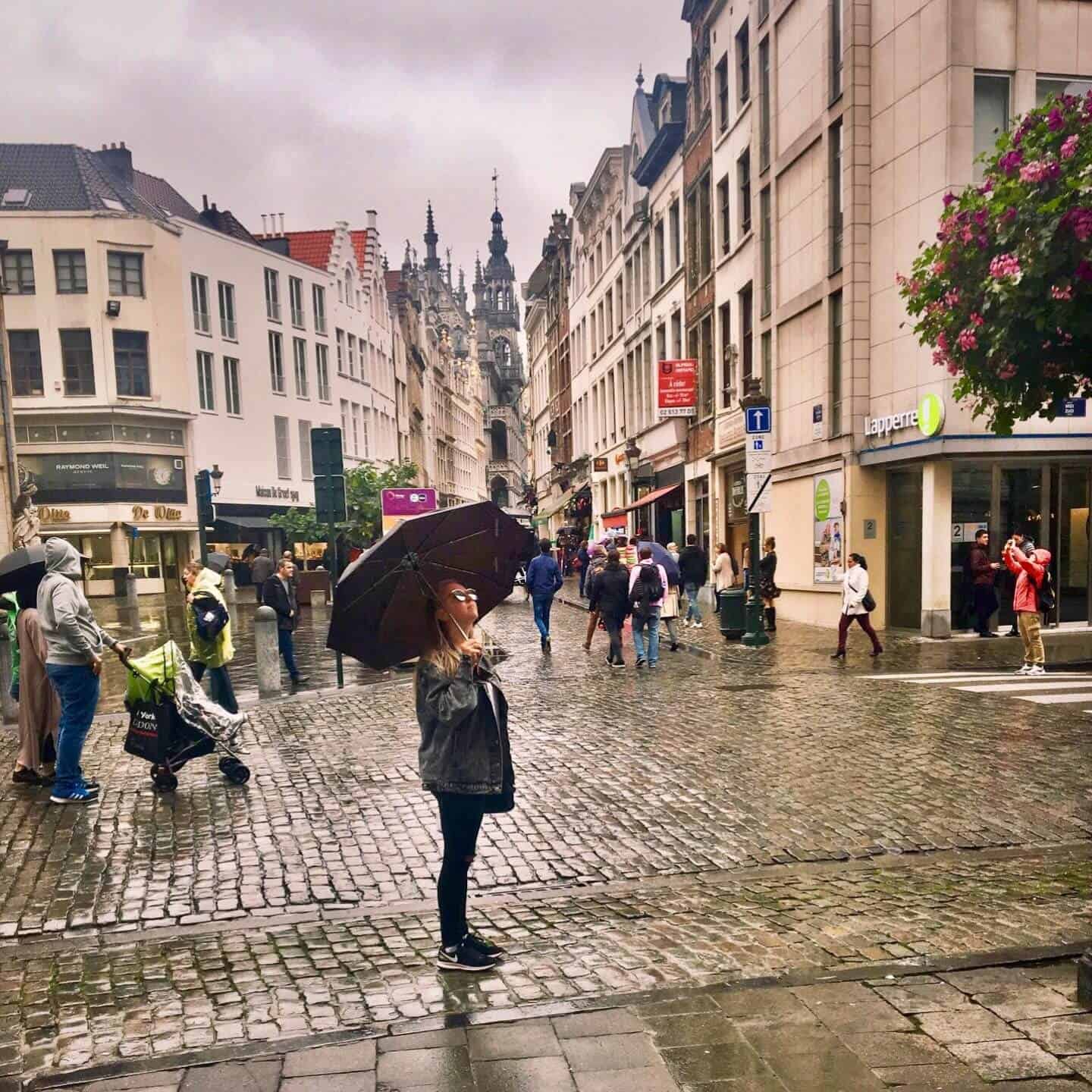 I spent an entire week exploring Belgium in whole, and loved every minute of it. Two of those days were spent in the capital city of Brussels. I have to admit, that while Brussels is not my favorite European capital, there is still much to see and do that make the trip worth it! But in all reality if you’re short on time, I’d highly recommend skipping Brussels all together and heading north to Belgium’s smaller towns – Ghent or Bruges. But if there are other reasons you’re coming to Brussels, then by all means, there is plenty to see and do in Belgiums capital! While there are a few architectural wonders to gawk at in Brussels, compared to other capital cities, it’s a bit short on site seeing. So that you know what you’re getting into before arriving, don’t expect a lot of museums and quaint alleyways. What you can expect is a whole lot of good food and drinks. Belgium is most famously known for waffles, fries, mussels, chocolate, and beer; and Brussels has no shortage of these things.

Arriving to Brussels – Day One Upon arrival to Brussels there is no better way to experience the culture than to dive right into the food and drink scene. My first stop was to Little Delirium, a smaller and more quaint alternative to Delirium. Little Delirium is a café bar with sidewalk seating; while Delirium is a big multi-level bar.

After leaving Little Delirium head further into the city to see the main jewel of Brussels. Grand Place. A jaw-dropping square of ornate buildings adorned in gold, originally built back in the 10th century. While it was once a small market, to this day its a bustling square full of cafés, bars, and restaurants.

Head to the Shopping Arcade for a Chocolate Crawl

After marveling at Grand Place make your way to the shopping arcade, a shopping center with stores facing a system of enclosed walkways.  The shopping arcade in Brussels was one of the first types of shopping centers like this in Europe and has since been copied by other cities including Paris. My favorite part about this particular shopping arcade in Brussels is how many chocolate stores they have! If you’re a chocolate lover like me, I would suggest a chocolate crawl through the arcade. Don’t miss, Neuhaus – the inventor of the praline and also voted best chocolate truffle by Bloomberg in 2016; Pierre Marcolini – for their salted butter macaroons; and Mary’s – best known for their rosé and champagne truffles. After leaving the shopping arcade, head to the infamous statue, Mannekin Pis. In all reality Mannekin Pis is an underwhelming two-foot statue of a little boy “peeing”. The city dresses up on the Mannekin on holidays, and on national prostate day the pee slows to a trickle. This statue is close to Grand Place so if you’re there it is worth it to see, otherwise… skip it. It does amaze me however, that such a small little statue has such a big reputation!

Start your second day in Brussels at Peck 47 for brunch. An indoor/outdoor seating arrangement with a line that is known to snake around the block. Think goat cheese and bacon waffles topped with poached eggs and spicy hollandaise. Complete with a bloody mary to wash it all down.

After brunch make your way towards the Ste Catherine neighborhood near the old fish market. There are a lot of bars and restaurants in that area and getting away from Grand Place gives you a sense of a less “touristy” Brussels and instead a more “local” Brussels.

To finish off your night in Brussels eat dinner at Balls and Glory, a gigantic meatball restaurant, in the heart of Brussels. And for a nightcap head to Café La Fontainas, a retro diner bar with a cool, laid-back vibe. With that… your 48 hours in Belgium is up! Thank you Brussels for sharing your love of beer and chocolate with me! I will be forever grateful, and I am still working on fitting back into my jeans!