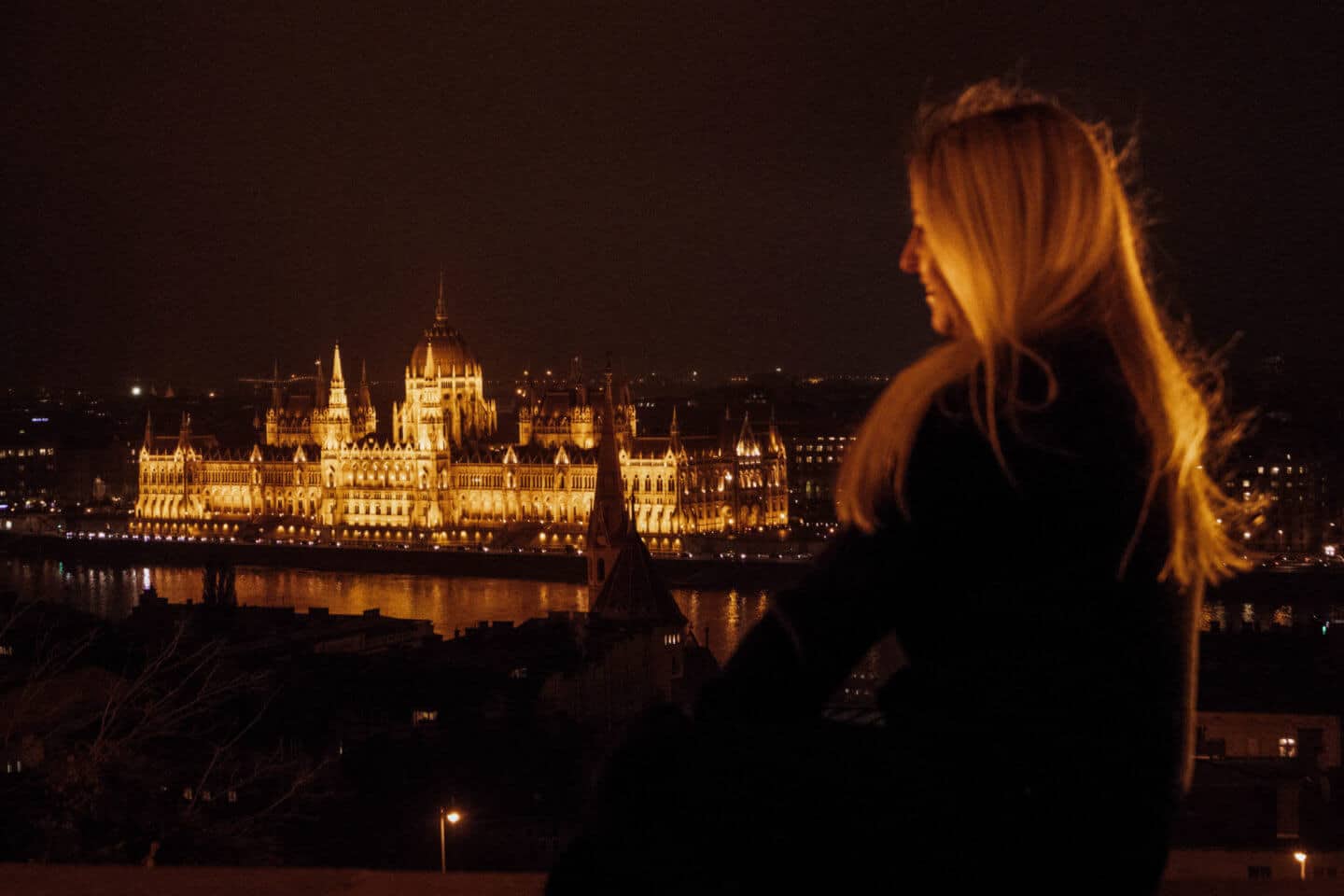 Disclosure:  This post may contain affiliate links, meaning I get a commission if you decide to purchase through my link, at no cost to you.

Budapest is one of those places that once you visit, you want to keep going back.  It’s a place that has a great reputation among travelers for being cheap, fun, and exciting.  After I had spent an exorbitant amount of money in Finland, I hopped on a plane to see what Budapest was really about.  A few hours later and I found myself in the heart of Eastern Europe – Budapest, Hungary; where I spent 4 days in Budapest exploring what made the city so unique, fun, and vibrant.

I was prepared for all the great things I have heard about Budapest in the past.  The fact that it’s affordable, there’s so much history and culture, and that it is just a downright fun city to visit.  With ruin bars, baths, and incredible architecture, you can get lost in time in the Hungarian capital.  What I wasn’t prepared for were the simpler things.  The amazing Hungarian food and wine that I had never had before.  Or over-the-top friendly locals, which was a nice treat when traveling alone.  And even the incredibly central and very cheap Airbnb that I managed to snag.

So if you want to slow down, and take your time exploring a city, Budapest would be the one to choose.  Spending four days in Budapest will allow you to get to know the city more deeply, while not costing an arm and a leg.

How to Spend 4 Days in Budapest The main language in Hungary is Hungarian; the sister language of Finnish.  Most restaurant menus are translated to English, and most people speak at least some English.

The main currency in Hungary is the Hungarian Forint (HUF).  Some places do allow you to pay in Euros, however, your exchange rate won’t be as good as you’ll end up spending more money.  At the time of writing, 1 USD = 298.31 HUF The main airport that services Budapest (BUD), is located about 15-miles east of the city.  The airport is easy to navigate and there are plenty of ATMs to withdraw cash from when you arrive.  There is about a $3 fee to withdraw cash.

The easiest way to get from the airport to the city is to take a taxi.  Once you’re out the airport doors, there’s a small taxi station where you will queue.  You’ll tell whoever is working where you’re going and they will be responsible to wave down your taxi and give them directions.  You are not supposed to wave down your taxi.  The drive into the city should be approximately 40 minutes and cost approximately $35.  Please note,  Uber was banned from Hungary in 2016 and does not operate there.  (If you’d like to book a taxi ahead of time, book here).

If you want to save money, taking a bus from the airport to the city is another option.  Bus 100E will take you close to the city center and takes approximately an hour.

Another money-saving option is to take the metro.  Like the bus, the metro will take an hour but you’ll need to first take bus 200E, get off, and then get on the M3 metro towards Budapest.

What to do in Budapest in 4 days…

Highlights:  Getting to know the city + Exploring Buda If you’re trying to get to know Budapest in 4 days, the first thing that you should know is that Budapest is divided into two different sides:  Buda and Pest.  Back in the day, the city was split into three different regions – Buda, Pest, and Obuda – but today Budapest is commonly known as having a Buda side and Pest side.  Originally connected by the Széchenyi Chain Bridge, Buda sits on the west bank of the Danube River and Pest on the east bank.

For more history on Budapest, read Buda vs Pest

To get to know the city, spend your first day participating in the free walking tour of Budapest.  The walk is put on by locals at Free Walking Tours and is an incredible mix of history and suggestions of what to see and do in the city.  The original city tour runs twice a day at 10:30 am and 2:30 pm.  They also offer communism walks (at 10 am and 3:30 pm), and the Jewish District walk (also at 10 am and 3:30 pm).

If you participate in the original walk, which I highly recommend, you’ll start on the Pest side at Vörösmarty square.  Expect to spend about three hours walking around Budapest ending on the Buda side of town in the Castle District.  This tour will give you an overview of the history of Budapest plus many recommendations on where to eat and where you can find local food.

After completing the three-hour walk, covering two miles of the city, sit down for lunch at Baltazár, located near your stopping point in the Castle District.

After finishing up with lunch, get a taste of Hungarian wine country by visiting the underground wine cellar in the Hilton Hotel.  Faust Wine Cellar serves local Hungarian wine with knowledgeable staff to walk you through how Hungarian wine is produced and how it’s unique to other wines.  It’s a cozy and intimate experience available for small parties; reservations must be booked in advance. Of all of the places to visit in Budapest in 4 days, surely the most impressive will be Fisherman’s Bastion.  That’s why even though you end your walking tour from the day before near Fisherman’s Bastion, I urge you to come back and explore without the crowds.  By waking up early, you’ll have a head start on everyone else and the tour buses that start to arrive at 8:30 am.

Spend your time walking through the Neo-Romanesque architecture of the Fisherman’s Bastion.  The original Bastion was built in the 1700s, forming the walls of the castle, and the seven towers represent the seven chieftains of the Hungarians who founded the country in 895.  Fisherman’s Bastion was named for the fisherman who lived under (and protected) the walls in what was called “Fishtown” or “Watertown”.  The structure that stands now was built from 1895-1902.

If you get to Fisherman’s Bastion around 8 am, it’s unlikely there will be a crowd.  It gets more crowded around 8:30 am when the tour buses begin to roll in, and even more so at 9 am when Matthias Church opens.

After walking around Fisherman’s Bastion, be the first in line to visit Matthias Church at 9 am.  The price for an adult to visit the church is 2000 HUF (around $7); tickets can be purchased on-site or online ahead of time.

Before the sunsets, make your way up Gellért Hill, the tallest point in Budapest.  At the top, you’ll be rewarded with sweeping views of the Danube River, Buda, and Pest.  There are carts with snacks and refreshments available at the top, however, I encourage you to bring your own refreshments and watch the sunset from one of the park benches on your way up.

Once night falls, circle back to Fisherman’s Bastion once more to see the Parliament building all lit up at night. Start your morning off by visiting the Hungarian Parliament Building.  The Parliament Building was built to show Hungary as a sovereign nation instead of three different cities (Buda, Pest, and Obuda).  The building is Gothic Revival architecture and was completed in 1904.  I highly recommend purchasing tickets ahead of time to avoid long lines.  Tickets cost approximately $20.

Upon leaving Parliament, make your way towards the Danube River.  Here you’ll find a free memorial, Shoes on the Danube, dedicated to the Hungarian Jews who were murdered by the Arrow Cross party in WWII.

Spend the rest of your day in the Jewish Quarter.  Here you’ll find everything from restaurants, to coffee shops, to the infamous Budapest Ruin Bars.  Ruin bars are unique to Budapest and were transformed from crumbling buildings to highly sought-after places to party in the early 2000s.  The first to open, Szimpla Kert, also happens to be one of the most popular.  Stop by for a taste of Hungarian nightlife.

If you plan to spend your night in the Ruin Bars make sure to fill up first.  If you’re looking to sit down, my choice in the area is Mazel Tov, a Mediterranean restaurant with great food and a great atmosphere.  Or for an on the go, cheaper option, check out Street Food Karavan.  Street Food Karavan is a street full of food trucks located near Szimpla Kert. On your fourth and final day in Budapest, experience the Hungarian Bath Culture.  Bath culture originated with the Romans who believed that cleansing in water that came from the ground had healing powers.  Today, Budapest has nine medicinal baths and over 100 hot springs.

The three most popular baths in Budapest are Széchenyi thermal bath, Rudas Baths, and Gellért Baths.  You can’t go wrong with any option.

Keep in mind that the earlier you arrive, the less crowded it will be.  Make sure to bring a swimsuit and flip flops to walk around in.

Visiting Budapest was truly one of the best trips solo trips I’ve been on.  It reminded me that Eastern Europe is worthy of being explored and that being in a cheap city, allows you to take your time, slow down, and explore in-depth.  With so much to see and do, there’s no way you could be bored when visiting Hungary’s capital.  Budapest has so much to offer and while four days was plenty of time, I didn’t even begin to scratch the surface.  And for that reason, I plan to spend 4 days in Budapest again…

Looking for more on Budapest?  Make sure to check out 10 Things to See and Do in Budapest As a Solo Traveler

Seeking a more visual look at Budapest?  Check out my Instagram page/highlight reel and find “Budapest” for more suggestions. 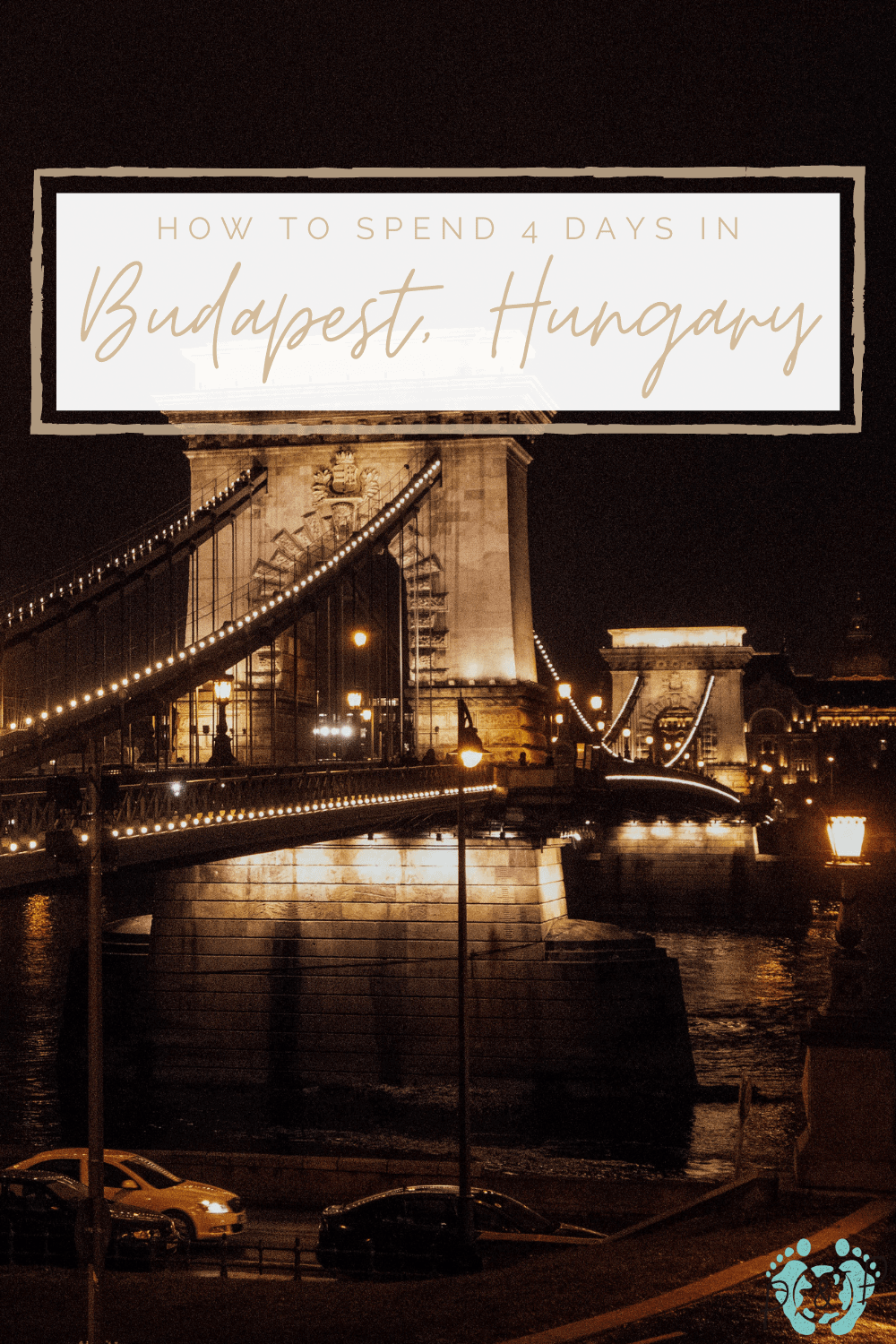 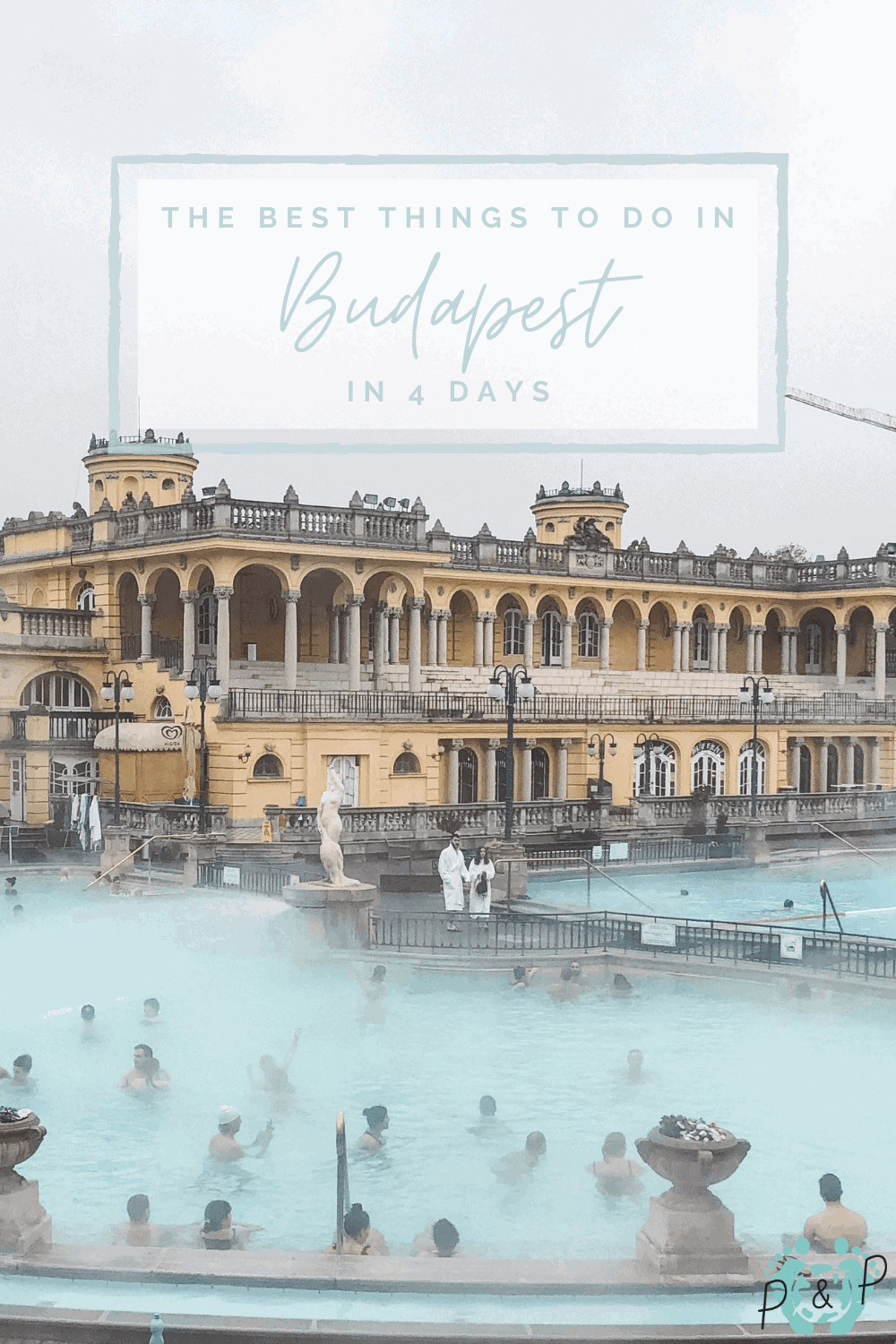