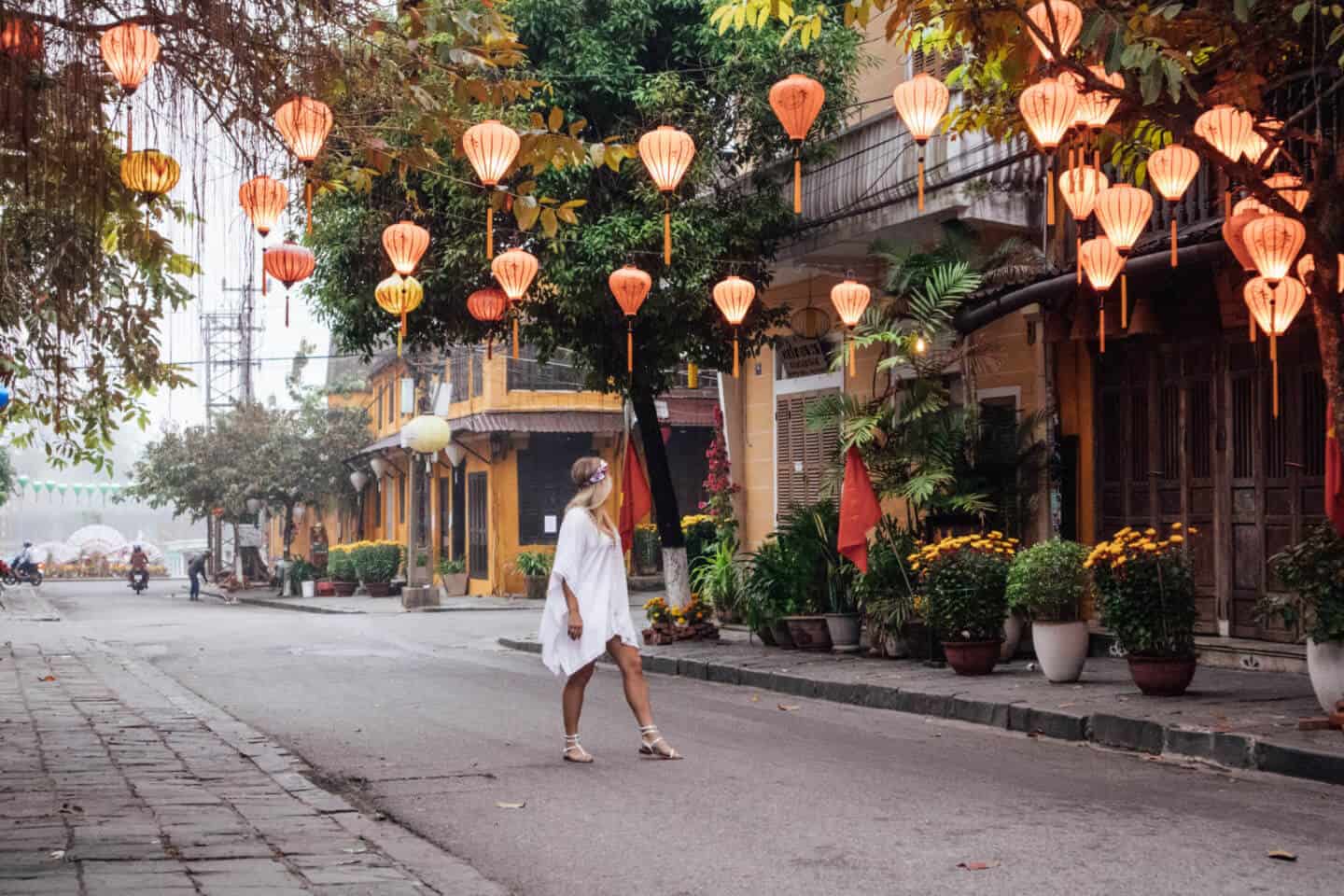 Vietnam was the last country I visited on my four-month solo adventure.  I arrived tired and worn out, but determined to make this one last country memorable.  You see, the thing that they don’t tell you about full-time travel is that it can be tiring.  There is such a thing as travel burns out.  And if you don’t stop to take care of yourself now and again… you likely won’t last.  So upon arrival to Vietnam, I recognized my burn out and spent four days holed up in Ho Chi Minh City binge-watching the Real Housewives of New York City.

Four days later I felt refreshed and ready to take on Vietnam as a solo female traveler.  Here’s what I learned spending two weeks in Vietnam, and if I were to do it again, the route I would take traveling through the country.

While most travelers I met along the way seemed to be beginning in the north of Vietnam and making their way south, I preferred to do the opposite.  You see, Vietnam only seems to get better the further north you travel.  Leaving behind the dusty, dirty, and overcrowded city of Ho Chi Minh and arriving in lantern filled towns, bays filled with aqua water and limestone cliffs, greenery, and cooler weather.  You’ll be awe struck by the beauty that you’ll find in Northern Vietnam and exactly why I prefer to end there. 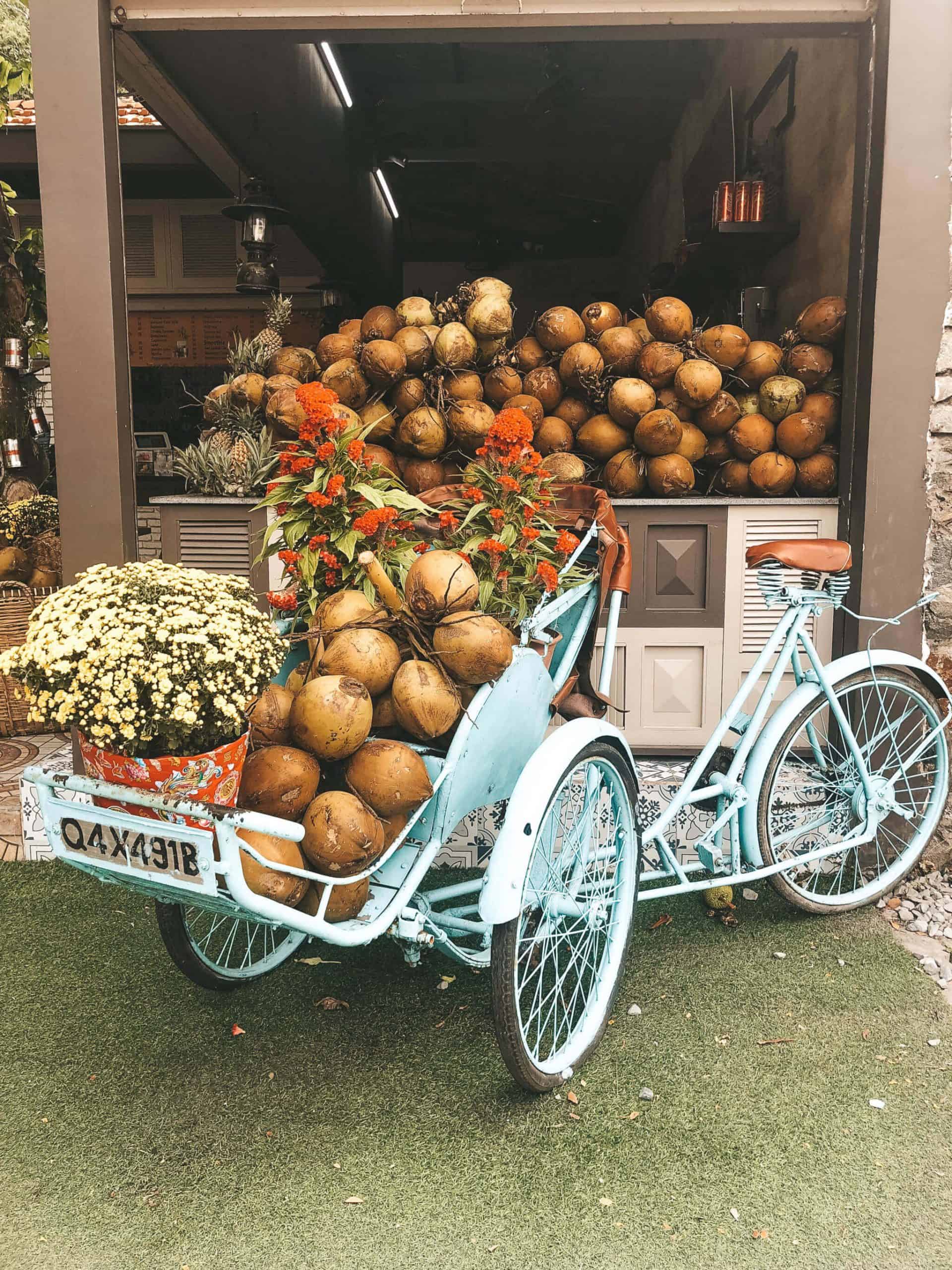 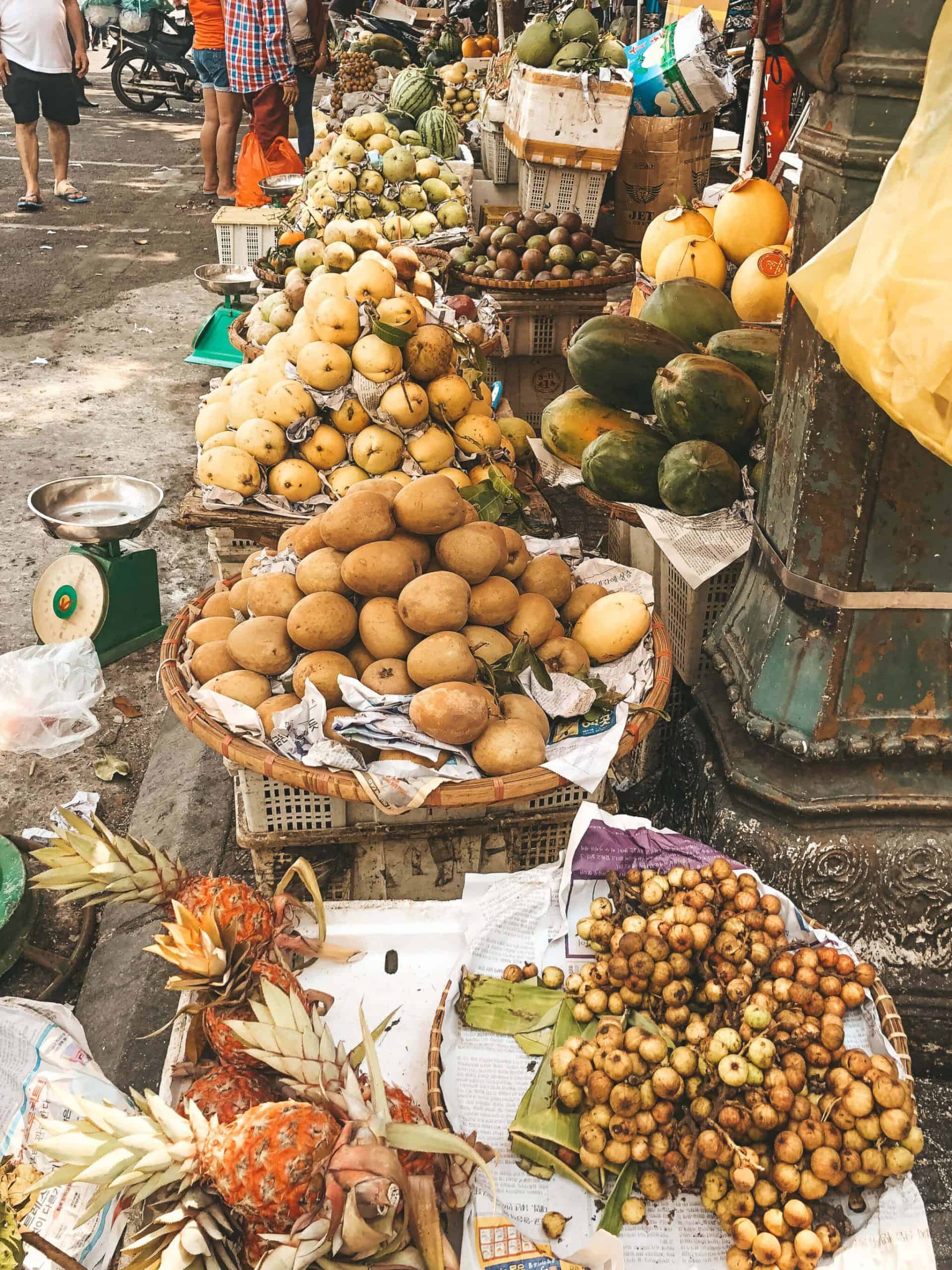 I arrived in Ho Chi Minh and was greeted in an unexpected way.  Crowds of people standing outside of the airport, yelling, hugging, whistling.  If this was what all of Vietnam was going to be like, I knew I would hate it.  The crowds, smog, and dirt.  Motorbikes whizzing by at a speed so fast you can barely cross the street.  I hired a taxi driver from the kiosk at the airport (you don’t waive down your own) and set off to what would be a wild few days in Vietnam’s largest city.

Tour the War Remnants Museum – Prepare for a cry as you tour a museum that takes you back in time during the Vietnam War.  Open seven days/week from 0730-1800.

Day trip to Cu Chi Tunnels or the Can Gio Island

An hour and a half flight will bring you to Da Nang (DAD), the airport located outside of Hôi An.  The two airlines that fly in Vietnam are VietJet Air – a budget airline; and Vietnam Airlines.  I use Kayak to compare prices and find the best flight.  From there you’ll need to catch a taxi, again order from the kiosk at the airport, don’t waive your own down.  A 45-minute taxi ride south will bring you to Hôi An.

When I arrived in Hôi An and saw the lantern filled streets, I knew I had arrived in a town that has not been overhyped.  While crowded and touristy, a place unlike any I’ve ever been to.  Feeling as though I’ve truly stepped back in time into an ancient city, Hôi An filled me with happiness and a sense that in this little corner of the world, everything is alright.

Highlights of Hôi An

Wander the ancient streets, marveling at the lanterns.  When I asked a local, “Why did Hôi An become the city of lanterns?”  He responded, “Because we like hanging lanterns.”  Touché my new friend.  I have since learned that Hôi An became the city of lanterns way back in the 16th century when they were used to light up homes.  Shop keepers quickly learned that the more lanterns they hung outside their shops, the more tourists would visit!

Visit the night market… and try not to get too overwhelmed!

My all-time favorite day in Vietnam was when I took the Hai Van Pass from Hôi An to Huê.  If you plan on visiting, read about it here. 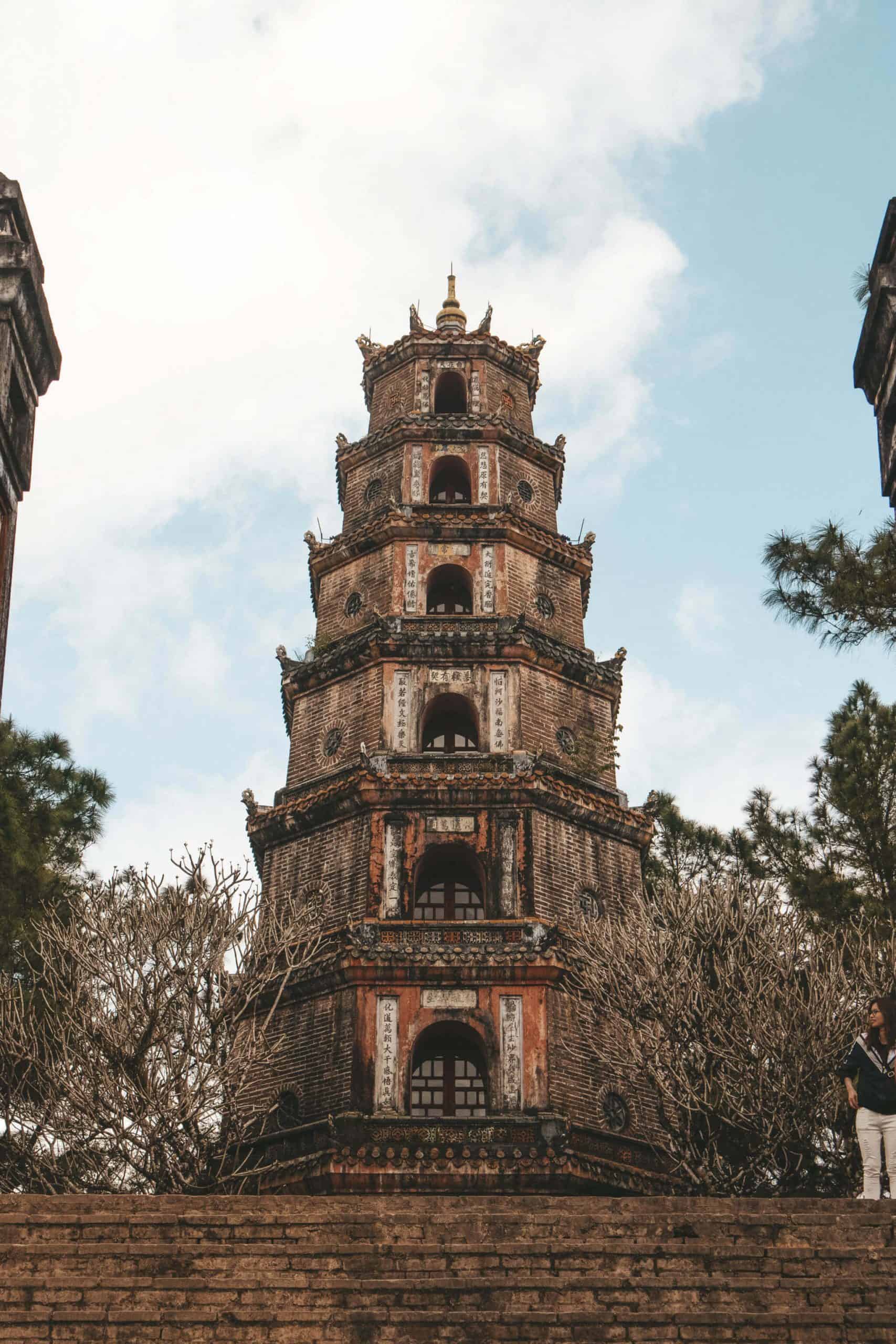 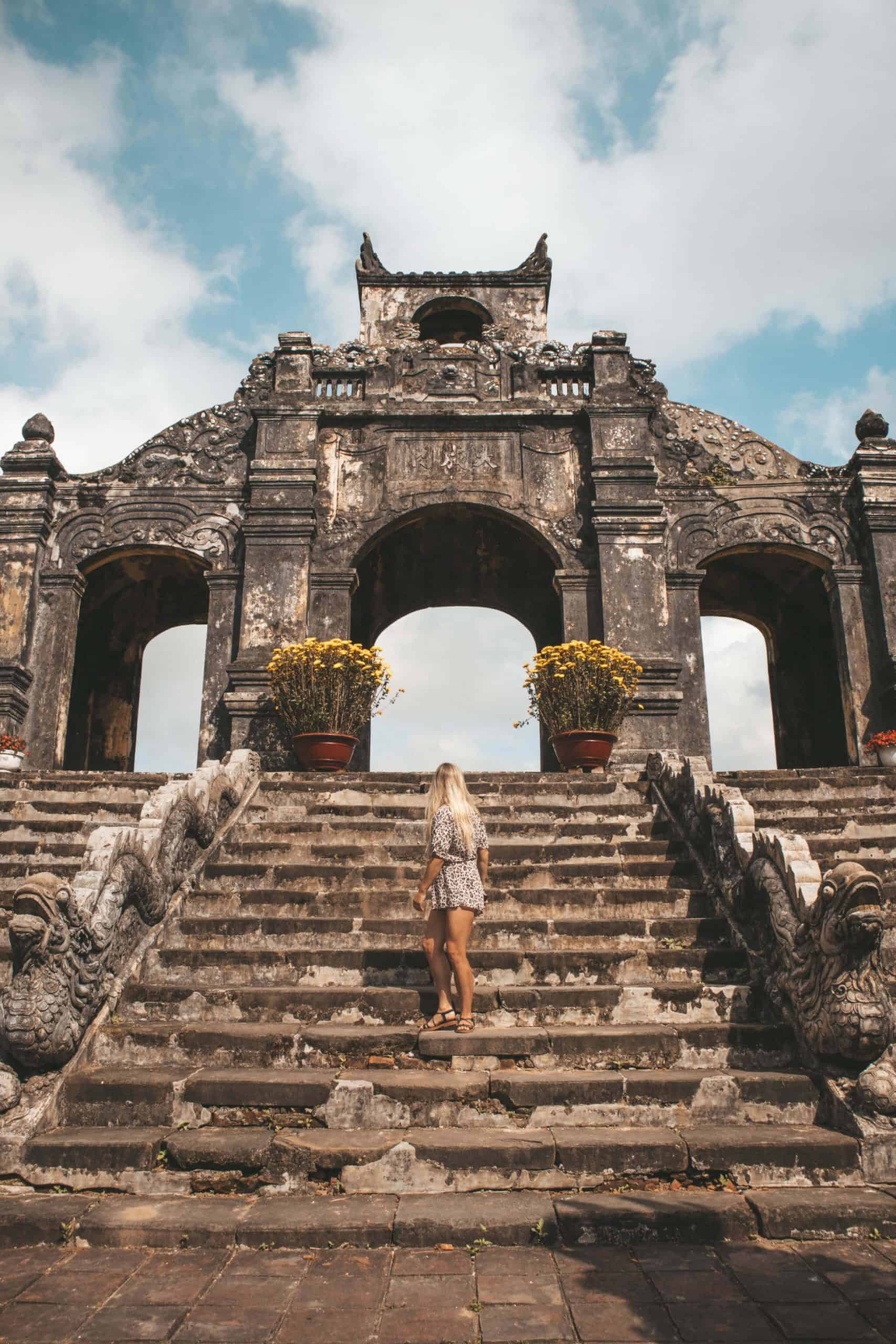 The stunning eight-hour motorbike ride from Hôi An will bring you three hours north to Huê.  Rich in history, Huê is most famously known as being the city that housed the Nguyen Dynasty emperors from 1802-1945.

Visit the Dai Nôi Citadel, located in the Imperial City

Venture to the Thuy Tien Lake Abandoned Water Park.  After this waterpark was built, it was mysteriously abandoned.  Nowadays tourists sneak it to investigate the eeriness of this abandoned theme park.  As a solo female traveler, I was advised not to go alone.  I was told that there are locals there who hang out knowing that tourists sneak in.

An hour flight north from Huê (HUI) will bring you to Vietnam’s capital city, Hanoi (HAN).  From Hanoi, take a bus an hour and a half south to Ninh Bình. 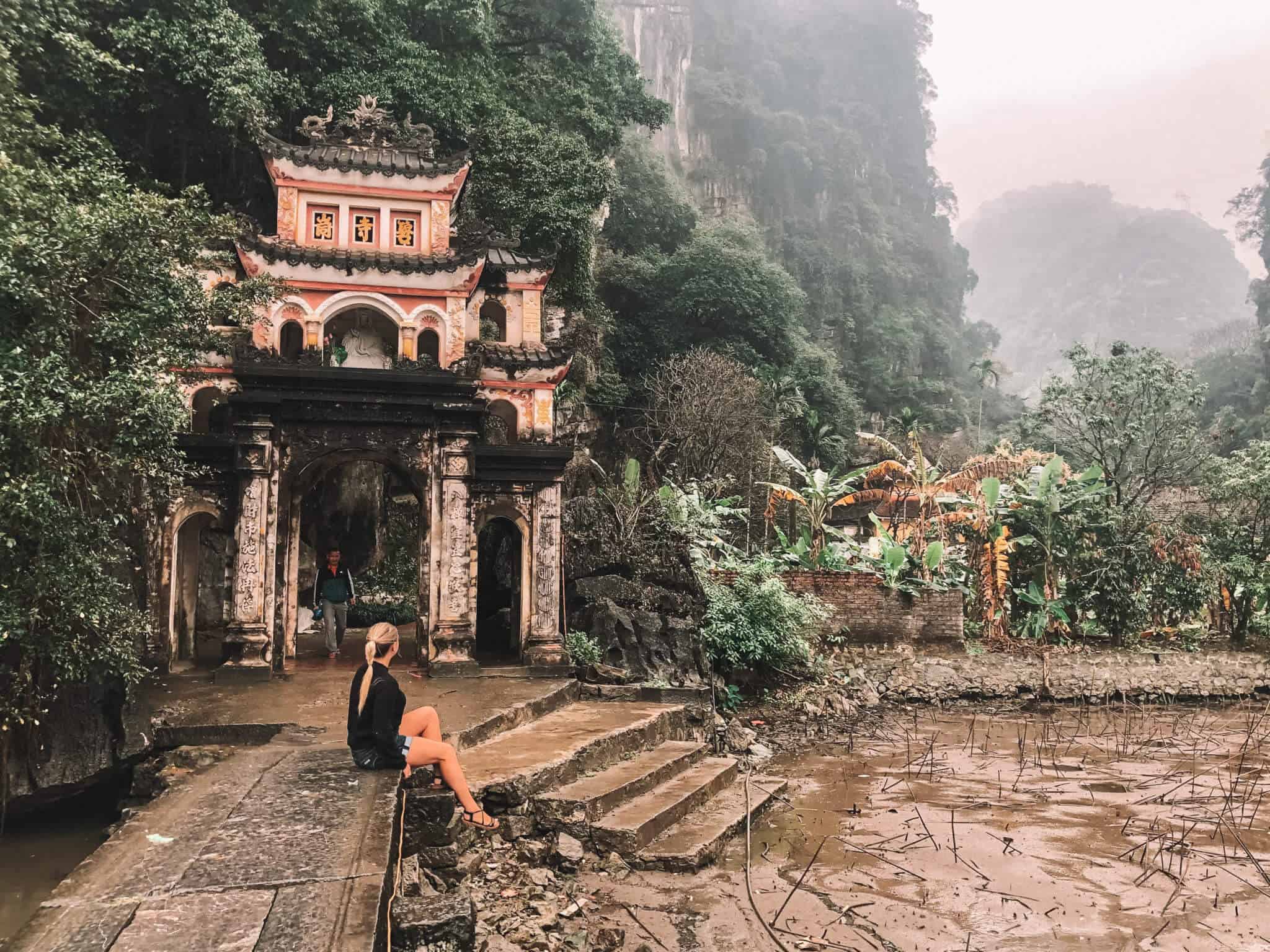 Stay:  Ninh BÌnh Greenland Homestay – At the Greenland Homestay you’ll receive a no-frills room complete with a pool, motorbikes to rent, and a family on hand and willing to answer any questions and help out with navigating through town

Arriving at Ninh BÌnh was an unexpected stop and an even more unexpected surprise.  Having not heard of this town before arriving in Vietnam, I had a few days to kill and happened to stumbled across it on a map.  Without doing any research I booked myself a room and took a bus to what happened to be Vietnam’s most beautiful landscape.  Limestone rocks jutting from the Earth, green rice fields as far as the eye could see.  I felt as though I gained a look at what it’s like to live in Vietnam from day to day.  As I walked the streets locals herded their cows, worked in the rice fields and gutted goats.  (Ninh BÌnh is known for goat cuisine).

Visit the Mua Caves at sunrise

Take a trip to the Bich Dong Pagoda

Take a 3.5-hour bus from Ninh Bình to the infamous Ha Long Bay. 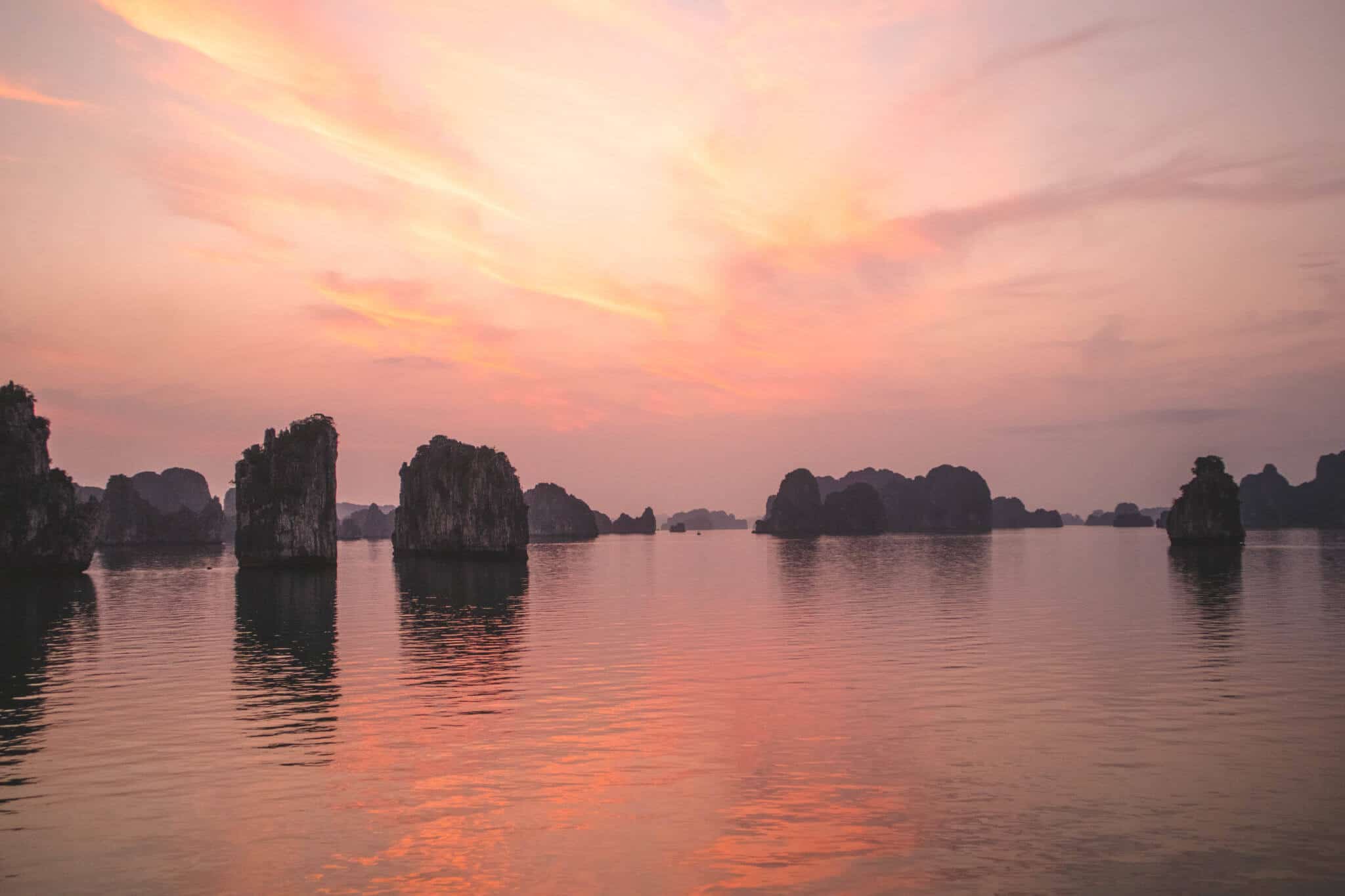 Although touristy, Ha Long Bay lived up to the hype.  Imagine waking up from a boat every morning to emerald water, limestone rocks jutting from the ocean, mini islands surrounding you, and complete serenity as the sun rises.  Ha Long is a designated UNESCO World Heritage Site, and for good reason.

A two day sail on a boat through the bay.  There are many boats that offer this (I searched booking.com then directly contacted the boating company for a cheaper price).  I would recommend two days versus one day because the first day is quite touristy and you don’t get the full effect of how serene and beautiful Ha Long is.  On day two you’re able to get on a separate boat away from other people and enjoy the Bay almost completely privately.

If you book a boat tour through the bay, inquire about a bus heading to Hanoi.  Most boat companies include this in their price! 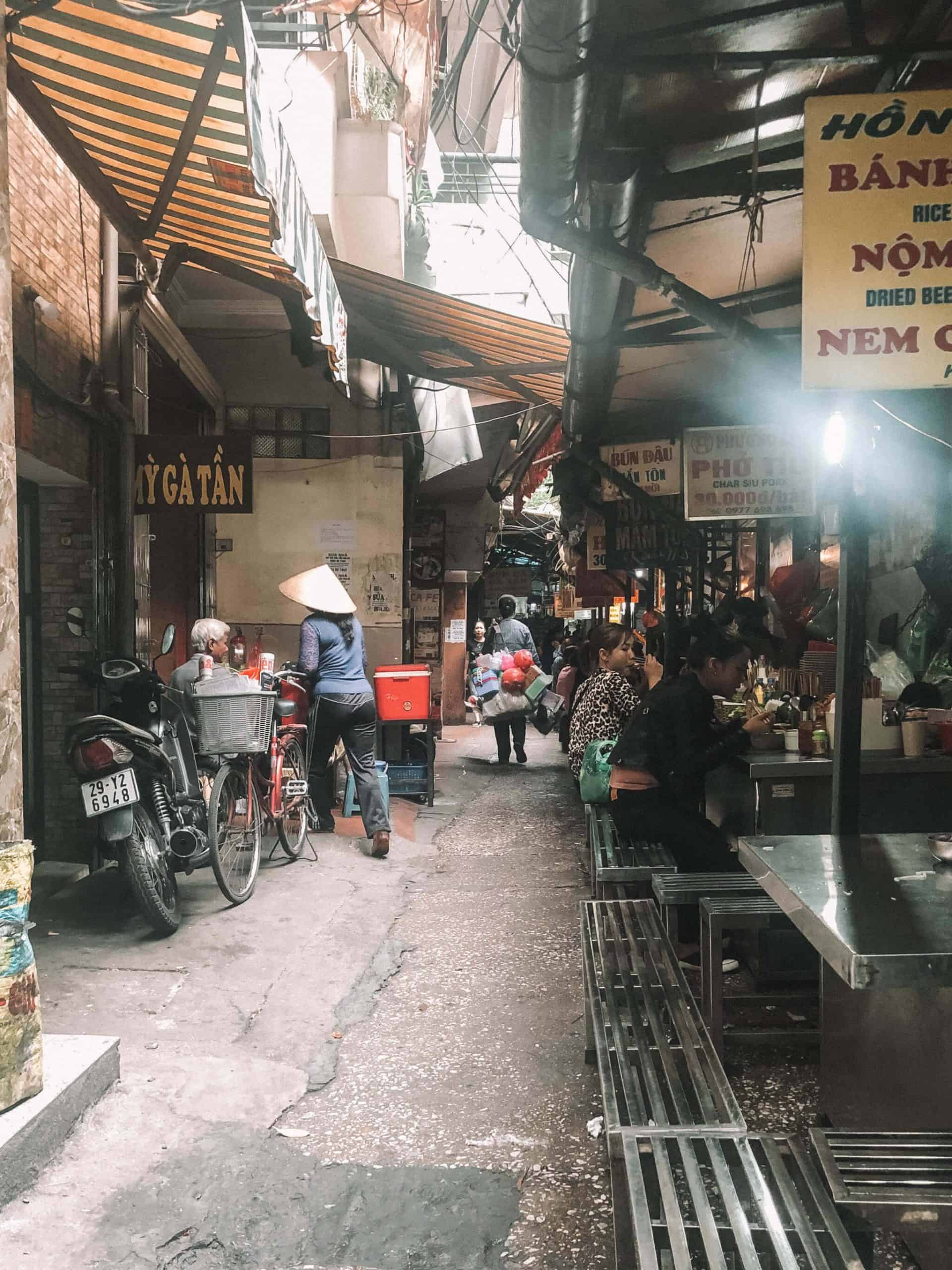 The last stop on my Vietnamese journey brought me to the capital of Vietnam, Hanoi.  Hanoi is a big city, though not as populous as Ho Chi Minh, known for its rich culture and old architecture.  It was here that I went on an insane food tour through the bustling streets.  I got my first Vietnamese massage.  And shed tears as I departed back to the United States.

Visit the Hanoi Street Train, where you can watch trains whizz by you in close quarters

Vietnam is a large expansive country with loads to see and do.  If you have more than a week and a half to spend in Vietnam I would recommend a flight to Phu Quoc, an island off of Southern Vietnam.  Or head north and trek through Sapa.