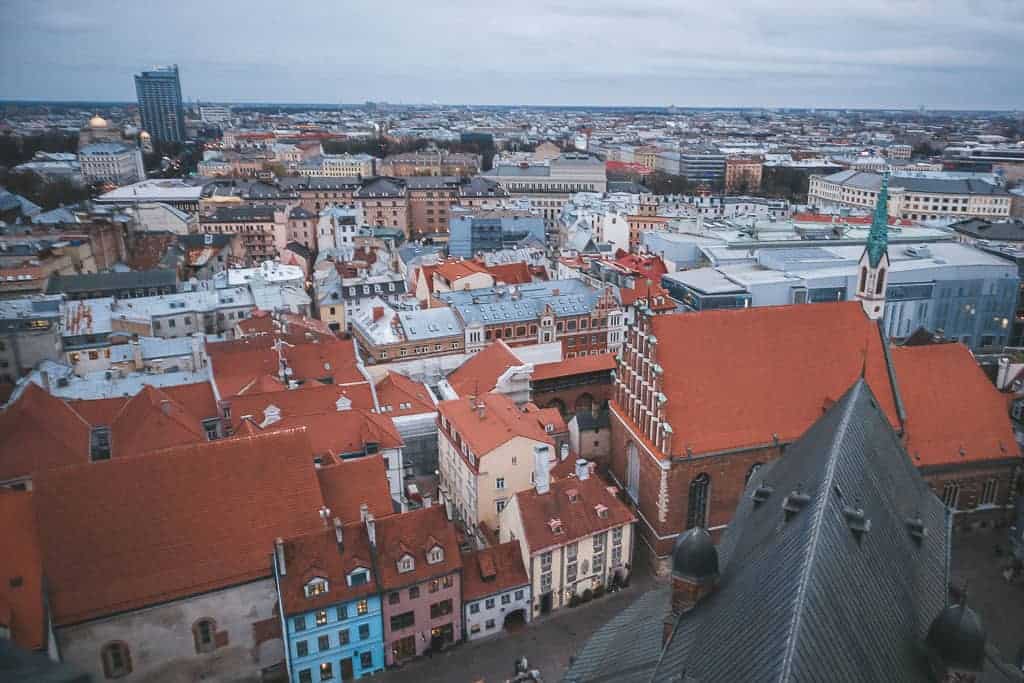 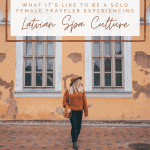 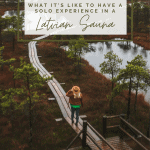 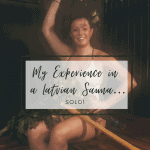 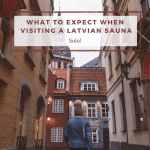 Having a solo experience in a Latvian sauna was the most terrifying, thrilling, invigorating experience I’ve ever had.  And it also started with the words… “Do you want a master”?

I heard about Latvia’s “sauna culture” a while back.  I remember reading something along the lines of, “It’s hot. Then it’s cold.  Then you get hit with tree branches”.  So naturally… I was curious.  When I found out I’d be visiting Latvia I knew I couldn’t pass up the chance to partake in this tradition dating back to the 19th-century.

Not knowing what to expect I simply began Googling “Sauna Riga”.  Keep in mind, I wasn’t looking for information, only where to find a sauna in Riga.  As of this moment I still only know, “It’s hot.  It’s cold.  You get hit with tree branches.”  My Google search informs me that most traditional Latvian saunas are outside of the city in the countryside, and the experience usually lasts all day.  The one sauna located in Riga happened to be closed on the only day I could go.  Determined, I found a local who started to do the research for me.  She came across a Facebook page, strictly in Latvian, and told me that I should message the owner to see what he says. 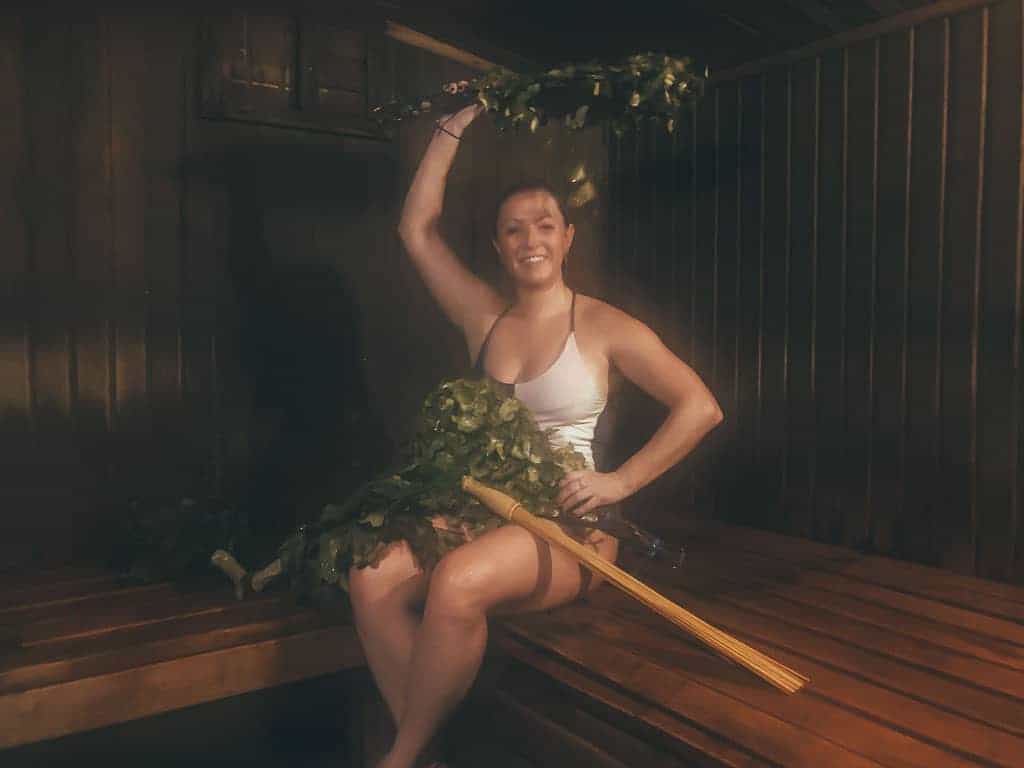 I messaged the owner and without expecting a reply back I was shocked when a mere moment later my computer “dinged”!  I had simply asked if there was an opening for one for a traditional sauna experience later that day.  The answer I got back enticed me… “Do you want a master present”?  Without thinking I excitedly typed “YES”.

As the time came closer to engage in the Latvian sauna culture, I felt increasingly more anxious.  I was heading outside of the old town to a part of Riga I hadn’t yet been.  Alone.  And was supposed to partake in a ritual I knew nothing about.  FOR THREE WHOLE HOURS.  On my walk there all I was thinking was, “Hot.  Cold.  Hit with branches”.  My anxiety only intensified when I had arrived at the location.

I turned off the main street to a mysterious looking side street.  On what looked like an old rundown hotel, I saw the word “BATH” written on the door.  With all of the doors locked I almost breathed a sigh of relief, “Guess it’s a scam, time to go”.  And that’s when the door swung open…

Two men awaited me in an old, shabby, rundown hotel

I was led around back and into the dark, shabby, no-frills, sauna.  There two men await me.  Just me.  And two strange men.  The owner… and the master.  I immediately thought, “This has to be some sick joke”.  Before thinking, “Am I being sold into sex slavery?”  Was the girl who found this place in on this?  After all, I couldn’t read the Facebook page.  I did not know about the sauna culture.  And very little explanation as to what to expect.  Oh, and did I mention that I was completely alone?

Luckily the owner of the sauna spoke English and walked me through what I was to expect during this three-hour ritual.  With my head buzzing I took in words such as, “naked”, “hit”, “honey”, “grapefruit”, “hot”, and “cold”.  With every sentence, I nodded my head willing tears not to stream from my eyes.  Although the owner knew I was worried, I was assured that the master was a professional and he had been working in saunas for 20+ years.

History of the Latvian Sauna Culture 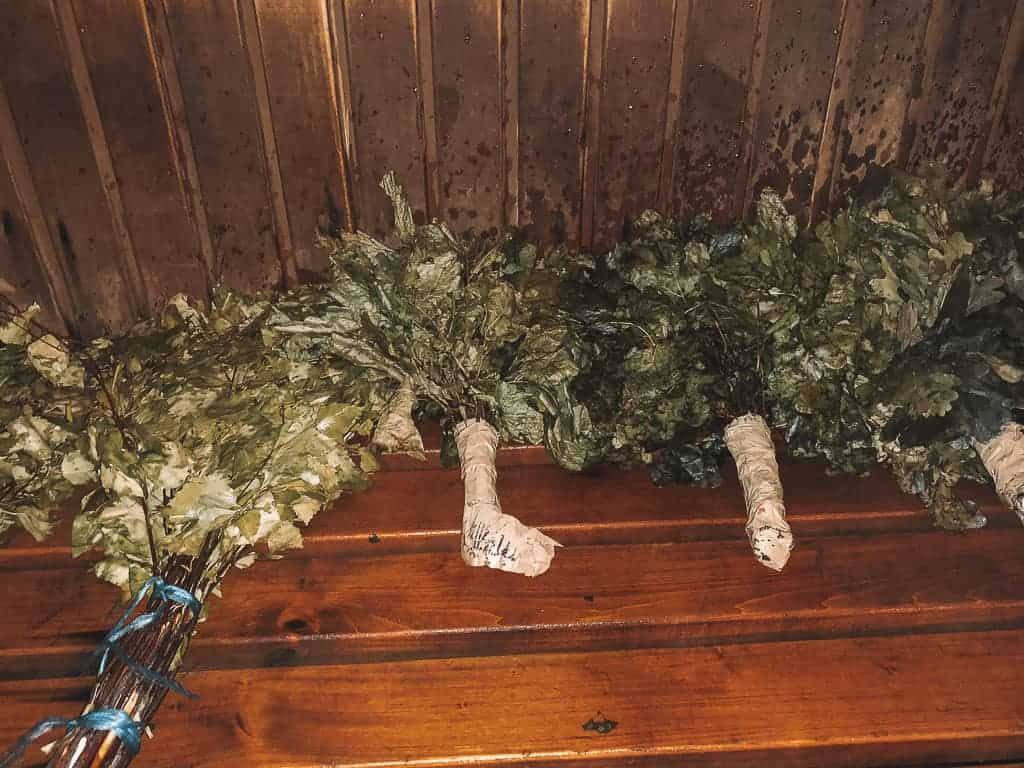 This history of the Latvian sauna culture dates back to the 19th century.  It’s more than a place to clean oneself, it’s designed to reduce stress and revive your spirit.  It’s also designed to strengthen your body by exercising your blood vessels.  It does this by exposing you to extremely high temperatures and then immediately extremely low temperatures; contrasting hot and cold throughout the process.

Two more things unique to the Latvian sauna are the use of pirts and the use of switches to swat one’s body.  Pirts, traditionally means that the sauna is wet versus using dry heat.  In Latvia cold water is gathered and poured over the stones, heated by a fire, which is how the sauna heats up.  The switches used are made from twigs – each master designs their switches based on healing properties, scents, and energy.  Being swatted is a form of massage and aromatherapy, it also helps build heat.

After the owner left the sauna it was just me and my master.  “What is my fate?” I thought to myself.  I took a deep breath and willed myself to clear my mind.  I put my stuff in the locker provided and before I knew it I had begun.  I was sitting in the sauna.  The master stepped in… and added cold water to the stones before stepping out again.  Not thinking it was too hot and I thought to myself, “Okay this won’t be so bad.  Maybe I can just stay in here the entire time”.  Little did I know the heat only builds as the minutes go on…

What felt like hours had passed when I finally got too “hot”.  When this happens I was instructed to say “hot”, so that the master knew it was time to cool down.  Remember, the sauna culture is unique in Latvia because it combines the sudden contrast between feeling hot and cold.  When it was time to cool down I was led to the main lobby and sat in front of a fireplace.  Tea was handed to me and I was instructed to wait until I felt as though I could return to the sauna once again.

With just us two, the process was starting to become… exhilarating 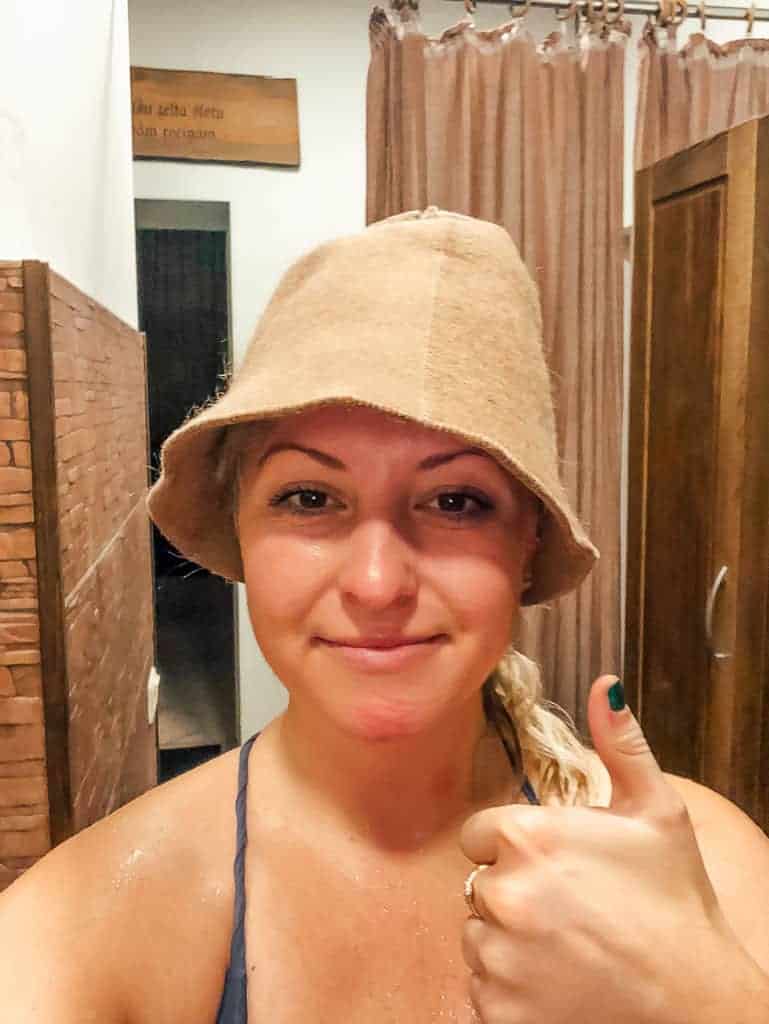 This ensued a few more times – enter the sauna.  Get unbearably hot.  Leave the sauna to sit in front of the fireplace.  However, each time I entered the sauna, the heat was building.  After the third time back in the sauna is when things started.  I was scrubbed down with salt and cinnamon (a surprising yet delicious smelling mixture) and rubbed raw with what felt like rubber prongs.  Next (and although it was not a surprise, I was instructed that this would happen), the master started swatting me with different types of branches.  Most commonly used are oak, birch, linden, and juniper.  A unique bundle of twigs picked by my master and suited for me.  Terrified, yet enthralled with this experience I willed myself to keep going.  With just us two present… the process was becoming exhilarating.

This time when I said “hot”.  I left the sauna expecting to cool down by the fireplace.  Instead, I was instructed to jump into an ice-cold pool.  The master would hold me as I lay flat, floating in the pool, with only my head above water.  As I hesitantly climbed the ladder to enter the pool, my thoughts of “Am I going to drown?” were swept away as I plunged into the water.  My breath was knocked out of me.  Wondering how long I’d last I lay there, eyes closed, lights off until I went numb.  What happened next was an out of body experience.  I felt as though I had taken off and was flying.  I was later told that this commonly happens and the more relaxed you are, the more intense the feeling.  The water experience only lasted about two minutes but even when I returned to the sauna the feeling that I was floating above my body hadn’t gone away.

Although I thought things were intense before… it was only after the ice-cold bath that things truly started to intensify.  Now when I entered the sauna it was so hot that I had to put a hat on my head to keep cool.  I was not only laying on the wood benches but on twigs and leaves that had been soaked in cold water.  Heat built as the master swatted me with the branches and this time when I said “hot” I was not allowed to leave.  Instead, cold grapefruit juice was squeezed into my mouth.  This continued in a cycle… over and over and over again.

I had only just given in and relaxed when my three hours were up.  Still unsure of what I had just gone through, I dressed as the masters next client walked through the doors.  A local.  She looked at me bewildered and said, “How did you hear of this?”  Quickly followed by a smile and, “You have the best master in Latvia.  Glad to have you here”.

And that is how I left.  Feeling on cloud nine.  Like I had pushed through my fears and accomplished something amazing.  I had been immersed in a local experience.  How many people travel and get to truly say that?

For the record, I would highly recommend and go back to this sauna.  It was called Lauku Pirts. 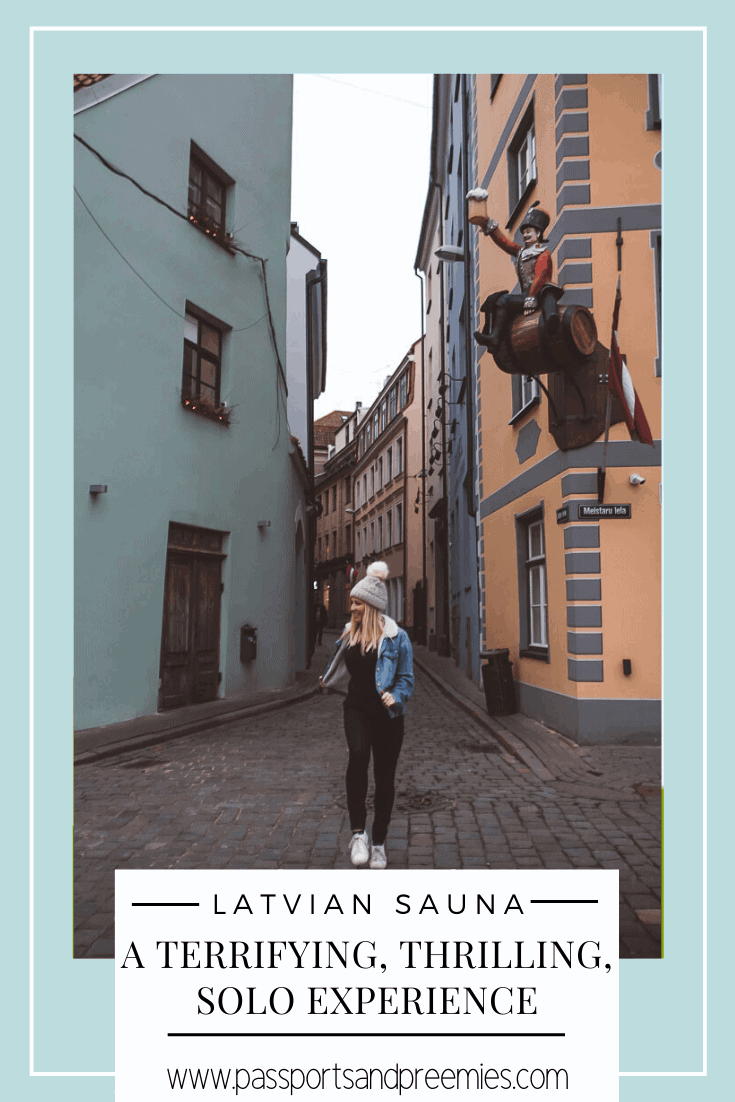 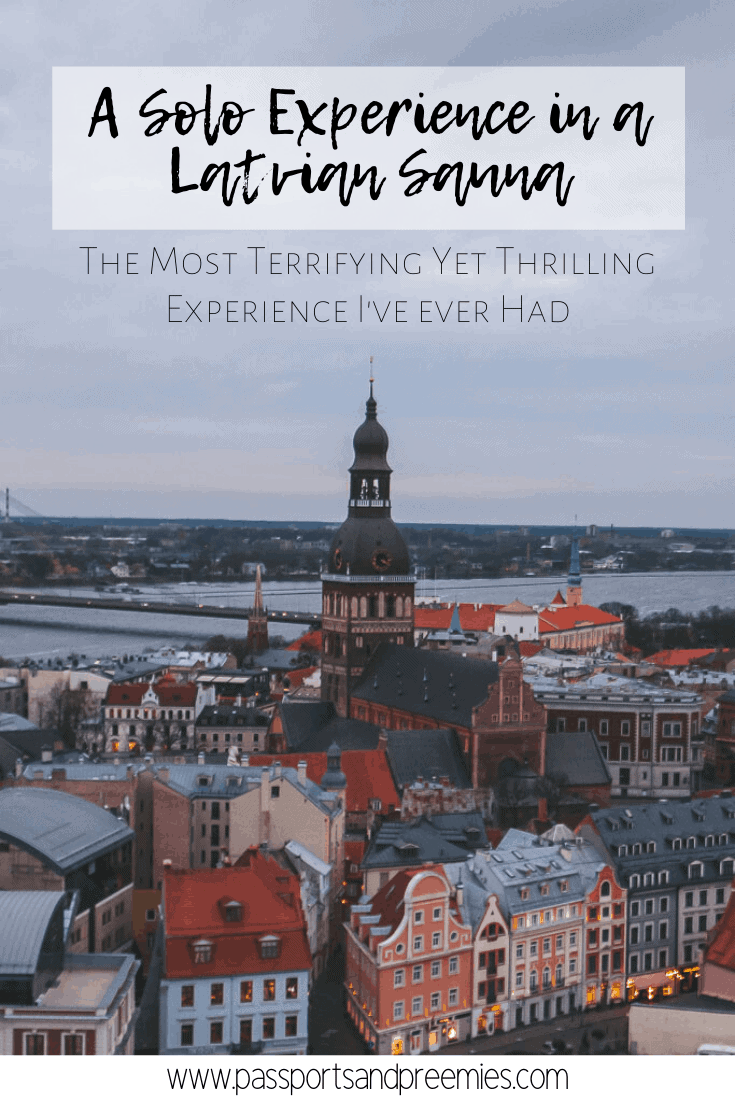 END_OF_DOCUMENT_TOKEN_TO_BE_REPLACED

Travel Nurse Health Insurance – What’s the Best Choice For You?