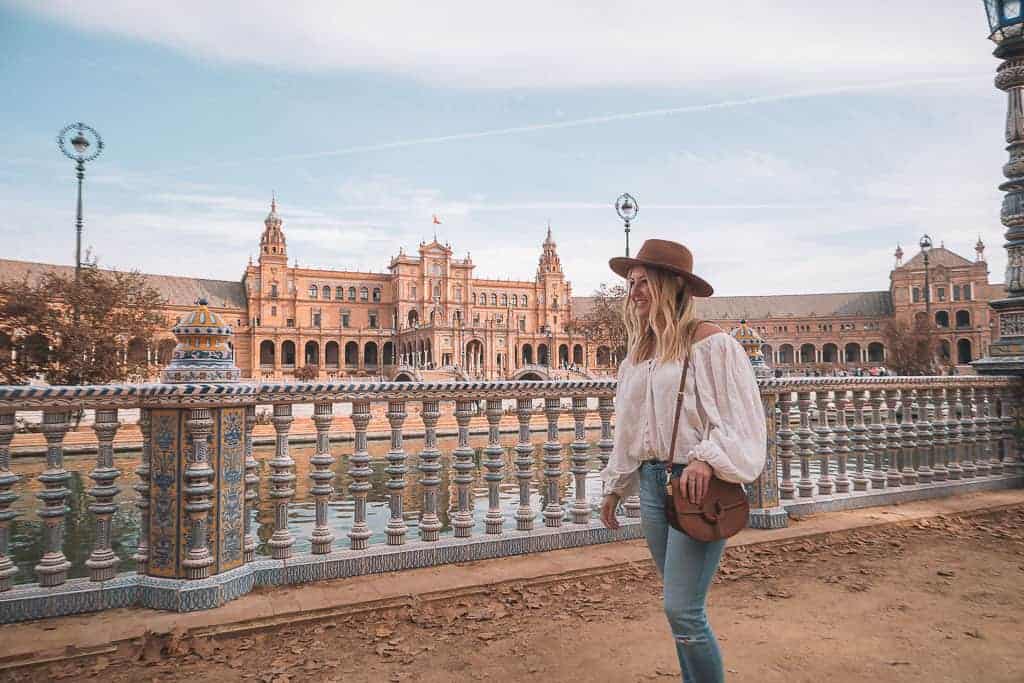 Seville is a town buzzing with high energy, bright colors, and friendly Spaniards welcoming you to town.  It’s located in what is known as the Andalusia region of Spain – Southern Spain; a region of hills and a region that was once under Moorish rule.  Aside from its bright colors and high energy, Seville is known for the creation of Flamenco, bullfighting, orange wine, tasty tapas, and more.  Although it’s not the biggest city in Spain there are many things to do in Seville and many reasons to visit.

Below you’ll find the top five experiences to have in this Spanish city.  From food and drinks to culture and experiences!

1. Experience the colors of the city The town is primarily painted in yellows (although more referred to as “sand color”) and reds due to the bullfighting that takes place in Seville.  The yellow is a tribute to the sand that is found on the floor of the ring, and the red is a tribute to the bloodshed during the fights.  I think that one of the things that makes Seville so unique is the colors themselves!  Brightly colored buildings greet you at each corner; primarily made up of reds and yellows with blues to compliment.  Everywhere you turn you’ll be amazed at what awaits you.  The three best places to experience the incredible colors of Seville while simultaneously visiting well known Seville attractions are listed below. 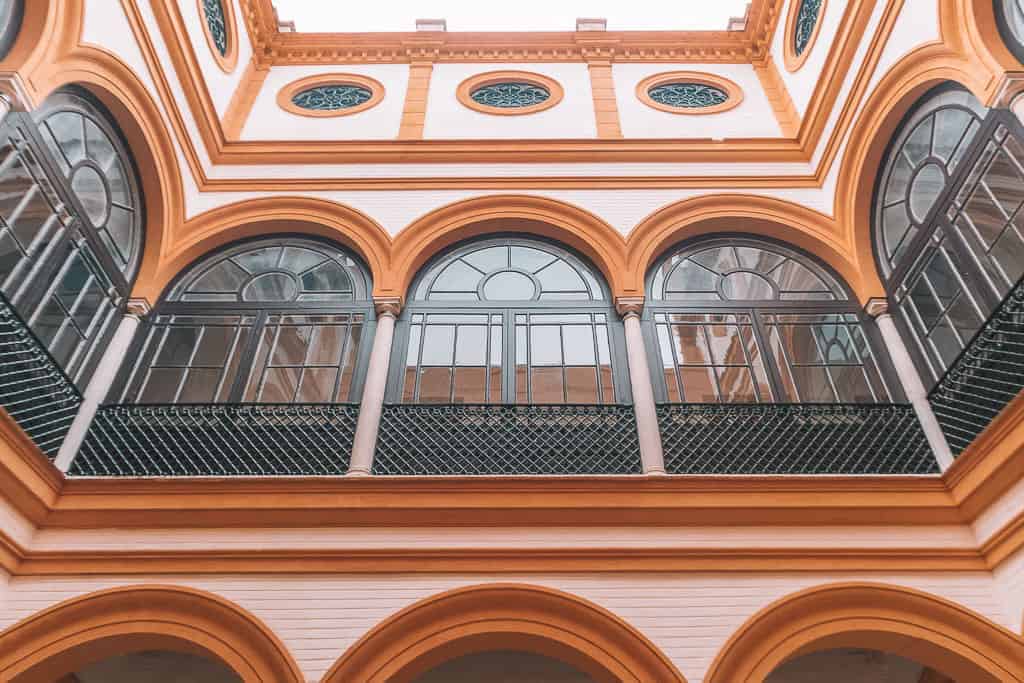 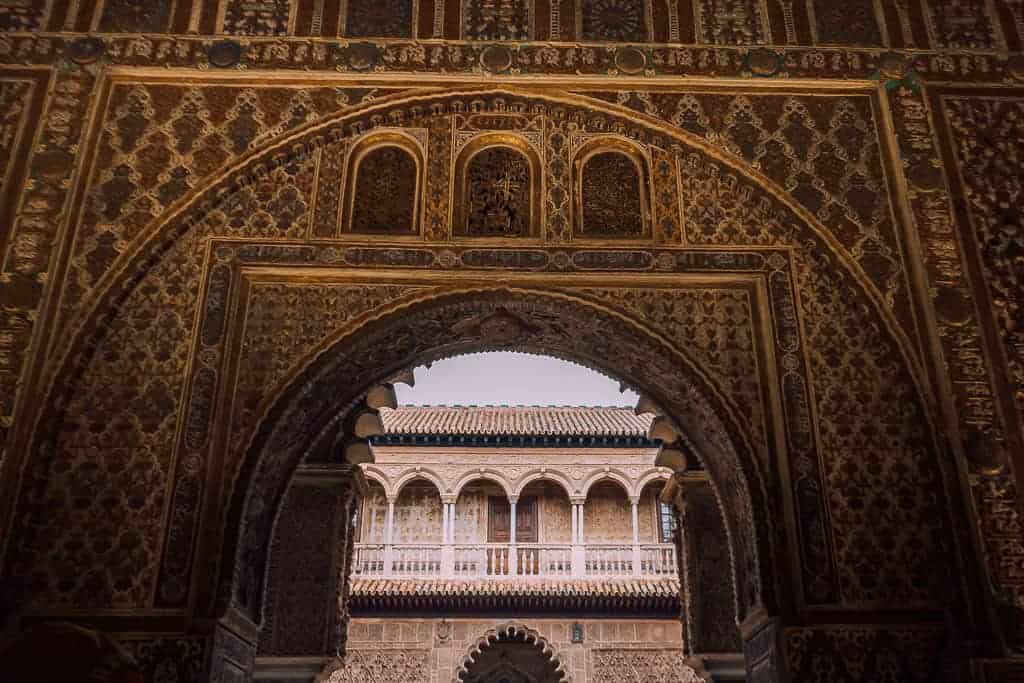 One of the top things to do in Seville is to visit the incredible Royal Alcázar.  The Alcázar was once a Muslim fortress, but after the “Reconquista” of Spain occurred (when the Christians overthrew the Muslims in 1492), the fortress was destroyed and built on top of it was a palace built for the king Peter of Castile.

Nowadays you can buy a ticket and tour the Castle grounds yourself, easily spending a few hours wandering around.  A maze of bright colors and Muslim and Christian influence will greet you as you tour the grounds.  The Alcázar is big enough to make you feel lost at times, but not quite big enough to get away from the crowds of tourists who flock to visit.  Because the Alcázar is wildly popular, I’d recommend buying tickets in advance in order to skip the line.  A general ticket with an audioguide will set you back 12.50 Euros.  The Alcázar is open seven days/week from 0930-1700. If you visit Seville, strolling through Plaza de España is a must.  Seeing the plaza was one of the more memorable experiences I’ve had while traveling and the intricate details of it took my breath away.  Made up of brick, tiles, and ceramic decorations, Plaza de España is located in Parque de María Luisa where it’s free to roam around.  The plaza was built for the Spanish-American Exposition of 1929 where multiple countries came to Seville to improve relations between themselves and Spain.  Seville had to prepare for the exhibition for 19 years, which I believe is a testament to the truly intricate details put into Plaza de España. Another location to experience the colors of Seville is where they originate from!  The bullring itself!  In Spanish, referred to as Plaza de Toros de la Real Maestranza de Caballería de Sevilla, the bullring is still in use today.  Although now it draws more controversy – according to my tour guide, the older generation feels as though bullfighting is a tradition.  While the younger generation feels as though bullfighting is animal cruelty.  Despite what stance you take, even viewing the ring from the outside allows you to see the colors that have inspired Seville. Having visited multiple cities in Spain, I don’t take it lightly when I say that Seville has some of the best Spanish tapas in the country.  Melt in your mouth croquettes.  Cold and creamy gazpacho.  Chorizo, sheep cheese, fried seafood.  All of these things and more can be found in almost every tapas bar that lines the streets.  Below you’ll find some of the best Seville restaurants to go for certain dishes.

Casa Morales – One of my favorite Seville tapas bar, head here for traditional Spanish tapas in a traditional Spanish sense.  Think creamy meatballs and fried croquettes all while standing around small tables chatting with friends.  (Don’t worry, I was alone and still enjoyed the experience!).

Quitapesares – For the cold gazpacho.  This tapas bar is unique because the owner (who has since passed – his son has now taken over), brought his love of song and orange wine from Portugal to Seville.  When he was alive it’s said that you could oftentimes find yourself in a lively bar full of singing!  Oh and that orange wine?  Made from grapes and aged for years in barrels with orange peels!

Casa Ricardo – For croquettes and sirloin with whiskey sauce.  What’s themed as an “Easter” bar, Casa Ricardo is almost always packed to the brim.  Locals and tourists alike come for the incredibly tasty tapas and vibrant atmosphere.  If you can’t find a place to sit, don’t turn away.  The food is worth the wait and the creamy, melt in your mouth croquettes are 100% worth it. Seville has a unique “drink scene”.  While you can get traditional Spanish beer and wine in any tapas bar or restaurant you enter, Seville celebrates a unique orange wine.  As explained above, the orange wine is made from grapes but aged for years in barrels with orange peels.  It’s quite sweet and is served in a small glass.  So if you find yourself wondering what to do in Seville, trying the orange wine should be on your list!

Las Setas De Sevilla – Also called Metropol Parasol, this structure is hard to miss and a wildly popular rooftop bar (amongst other things).  Be prepared to wait in line to get in.  The line starts on the bottom floor where you’ll take an elevator up.

Hotel Alfonso XIII – This beautiful five-star hotel is the most expensive in Seville, and has seen visitors such as former President Obama, David and Victoria Beckham, and more.  While the cheapest drink you can get is a coffee, its worth it for the look around inside.

4. Experience the largest Gothic Cathedral in the world 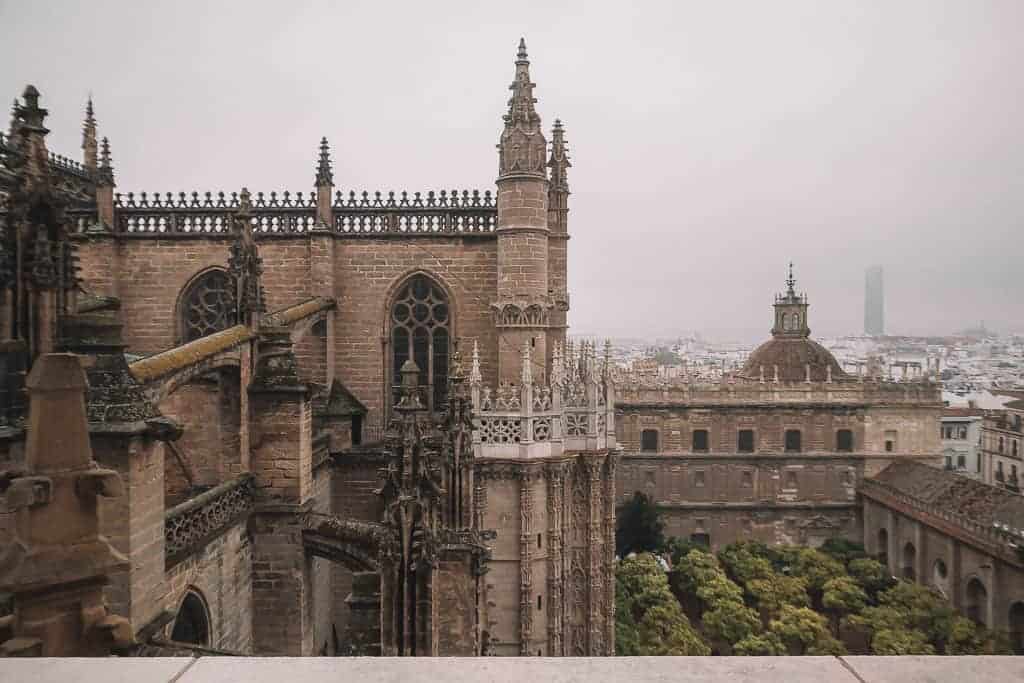 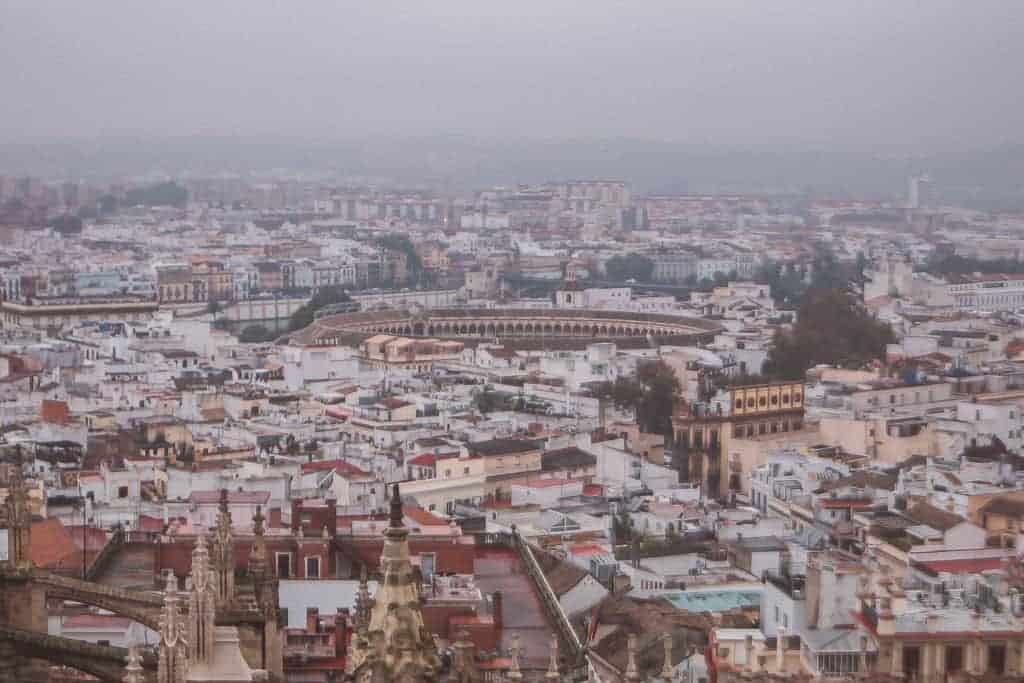 The Catedral de Seville is the largest gothic cathedral in the world and the third-largest cathedral in the world.  It’s a Roman Catholic cathedral, a UNESCO World Heritage Site, and is near the infamous Royal Alcázar.  The cathedral was built to show how wealthy Seville was due to it being a major trading center after the Reconquista.  Members of the cathedral are quoted saying, “Let us built a church so beautiful and so grand that those who see it finished will take us for mad”.

To enter the cathedral you’ll have to pay a fee at the door – nine Euros, which allows you to access the cathedral along with the Giralda Tower.  If you want to purchase an audio guide while you walk through, that will set you back an extra three Euros.  The Giralda Tower is over 300-feet tall and offers sweeping views over Seville.  As you walk up the ramps to the top of the tower you’ll pass many lookout points and nooks that showcase various historical displays.

5. Experience Flamenco – Where it was born! If you want to experience Flamenco in Seville you must start the proper way, by visiting the Triana neighborhood.  Located on the west bank of the Guadalquivir River, Triana has played a huge role in the development of the culture and traditions found in Seville.  Triana was once referred to as the Gypsy Quarter for the Roma people who occupied it.  The Roma people have produced some of the greatest Flamenco performers and Triana is typically referenced in songs.

If you want to dive further into the history of flamenco, there’s a flamenco museum – Museo del Baile Flamenco – where you can learn the heritage of this art.  You can visit the museum and see a live show while you’re there.

So you see, there are tons of things to do in Seville, Spain, and many different types of experiences to have.  Whether you’re interested in history, culture, architecture, or food… Seville is definitely worth the stop if you’re in Spain.

Are you planning on visiting Spain?  You might find these posts helpful…

The Ultimate Guide to Barcelona

How to Spend One Day in Malaga

Do you want a more visual look at Seville?  Make sure to check out my Instagram story/highlight reel! 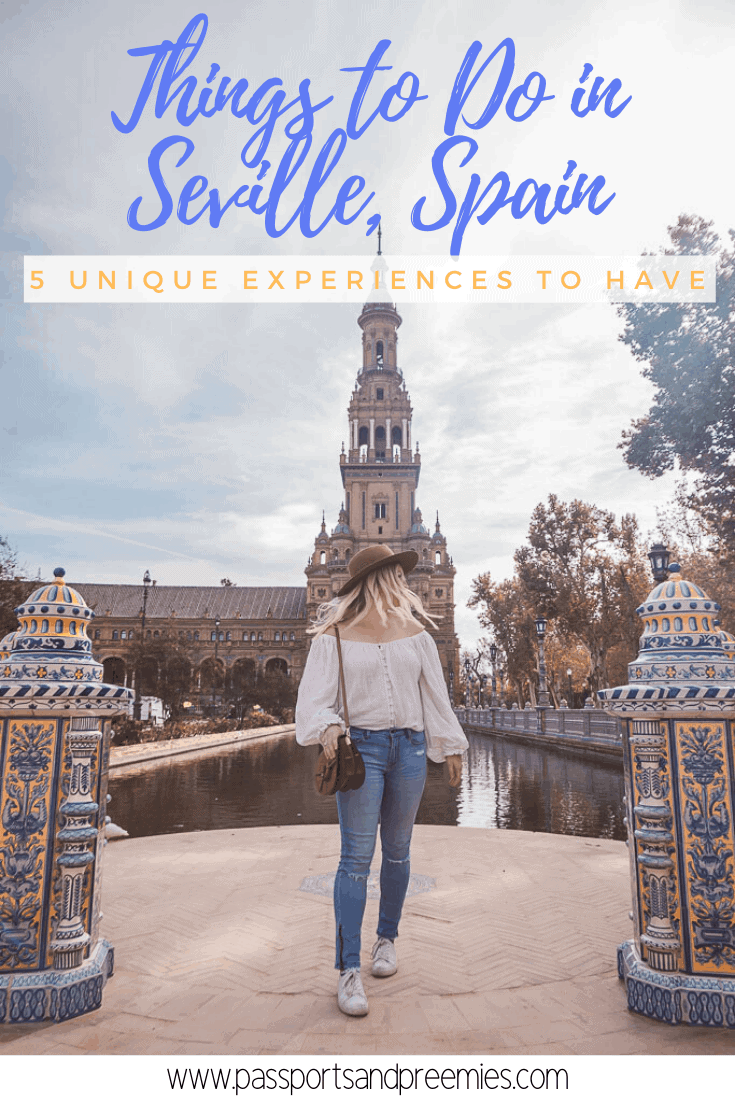 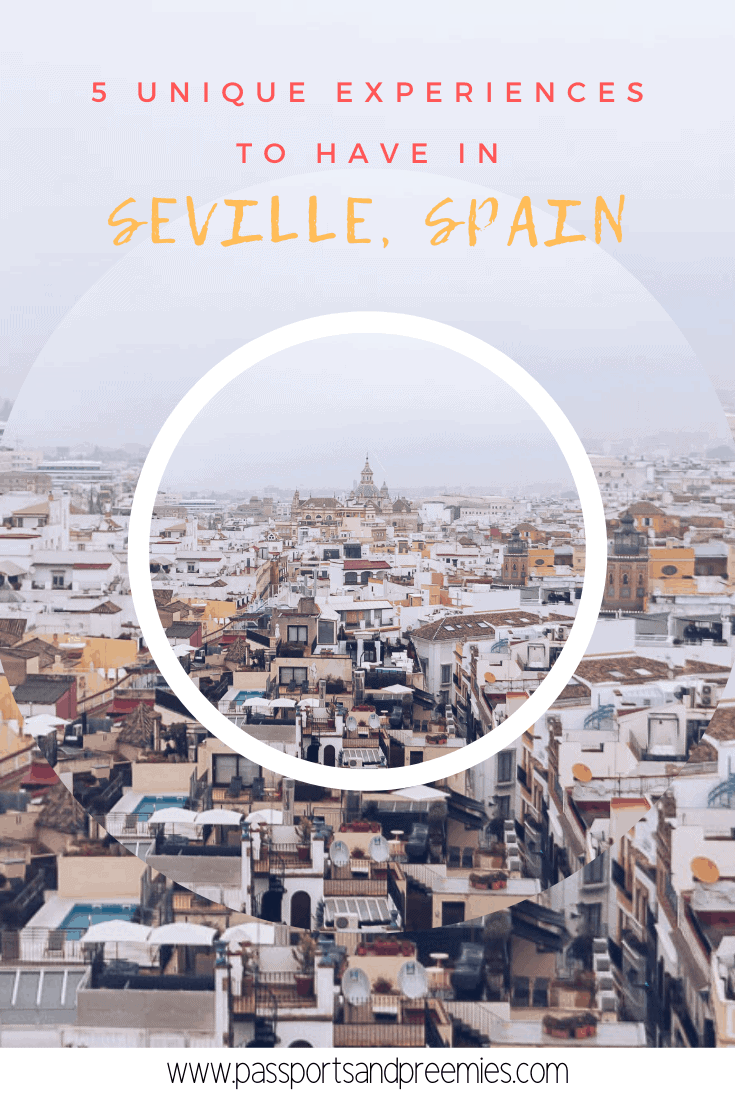