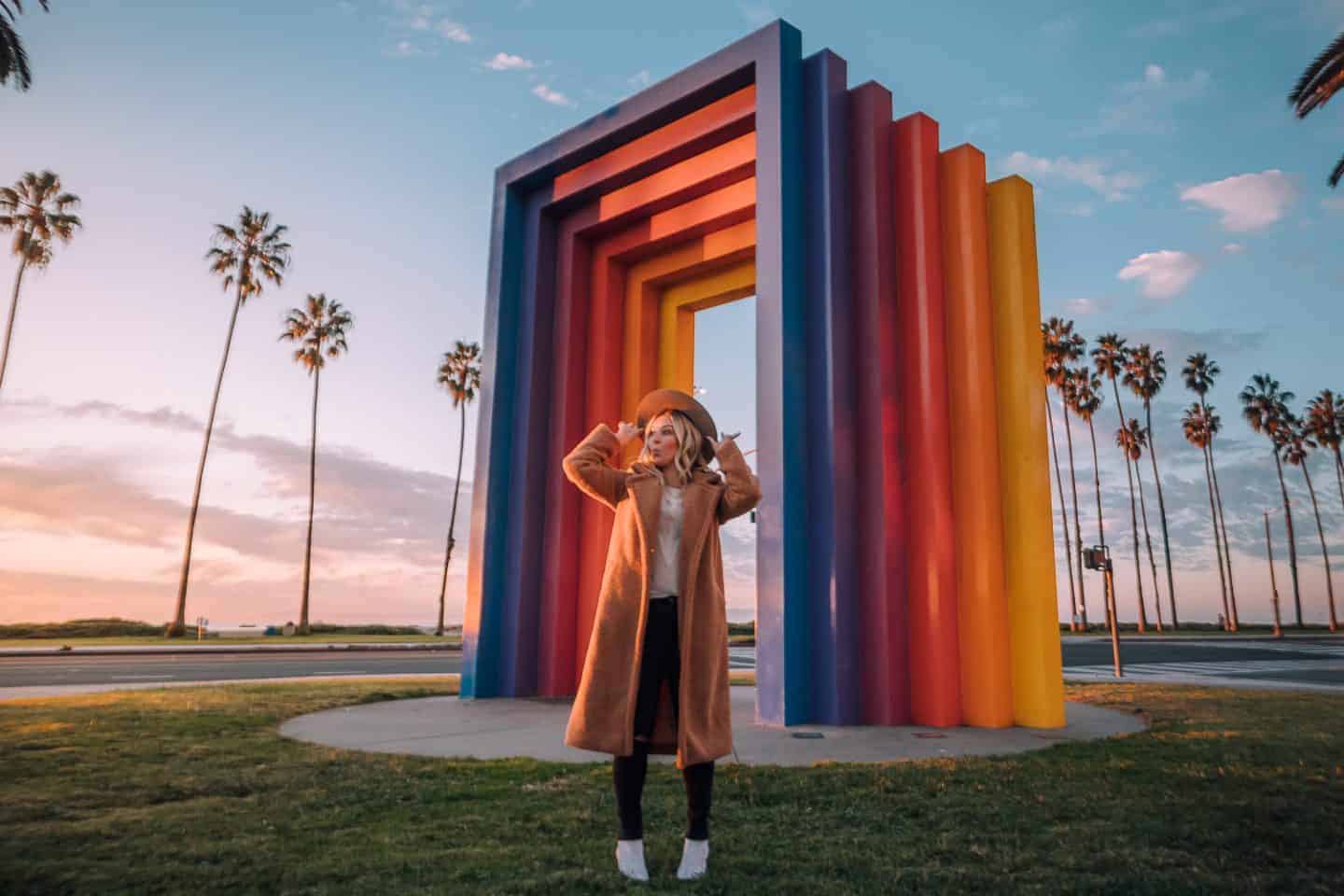 Located in Central California, Santa Barbara is a beautiful beach town north of Los Angeles and south of San Francisco.  It sits between the Pacific Ocean and San Ynez Mountains, making it an ideal location for those looking for outdoor activities and fun in the sun.  With this ultimate Santa Barbara itinerary, you’ll see the best things to do while spending 2 days in Santa Barbara and the surrounding areas. 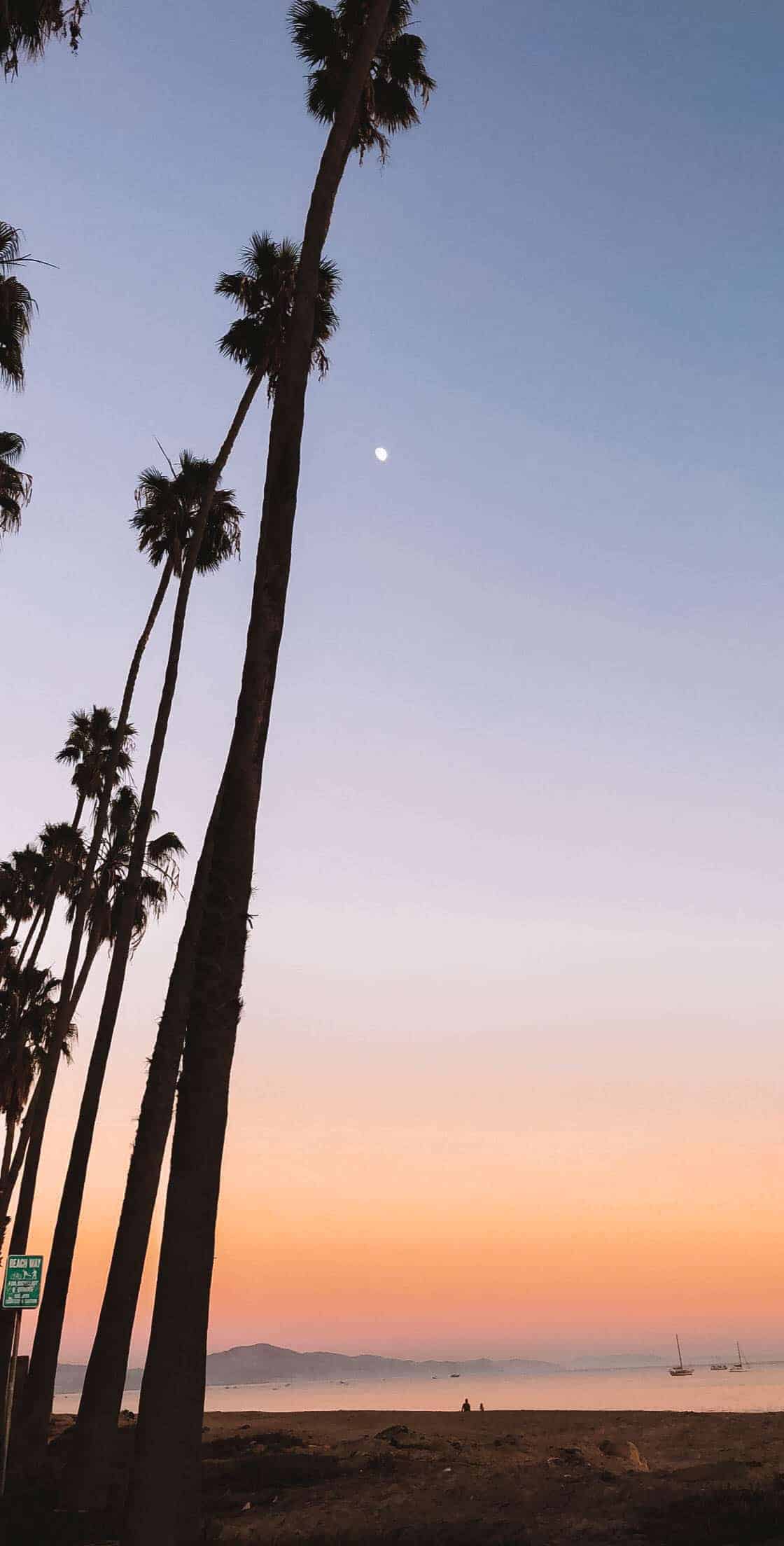 Referred to as “America’s Riviera”, Santa Barbara is home to upscale boutiques, wine rooms, and pays tribute to the Spanish that once ruled the area with white stucco buildings and Spanish street names.  It’s ideal to spend a weekend in Santa Barbara, soaking up the California sun, day-tripping to surrounding regions such as Solvang and Los Olivos, amongst other things. 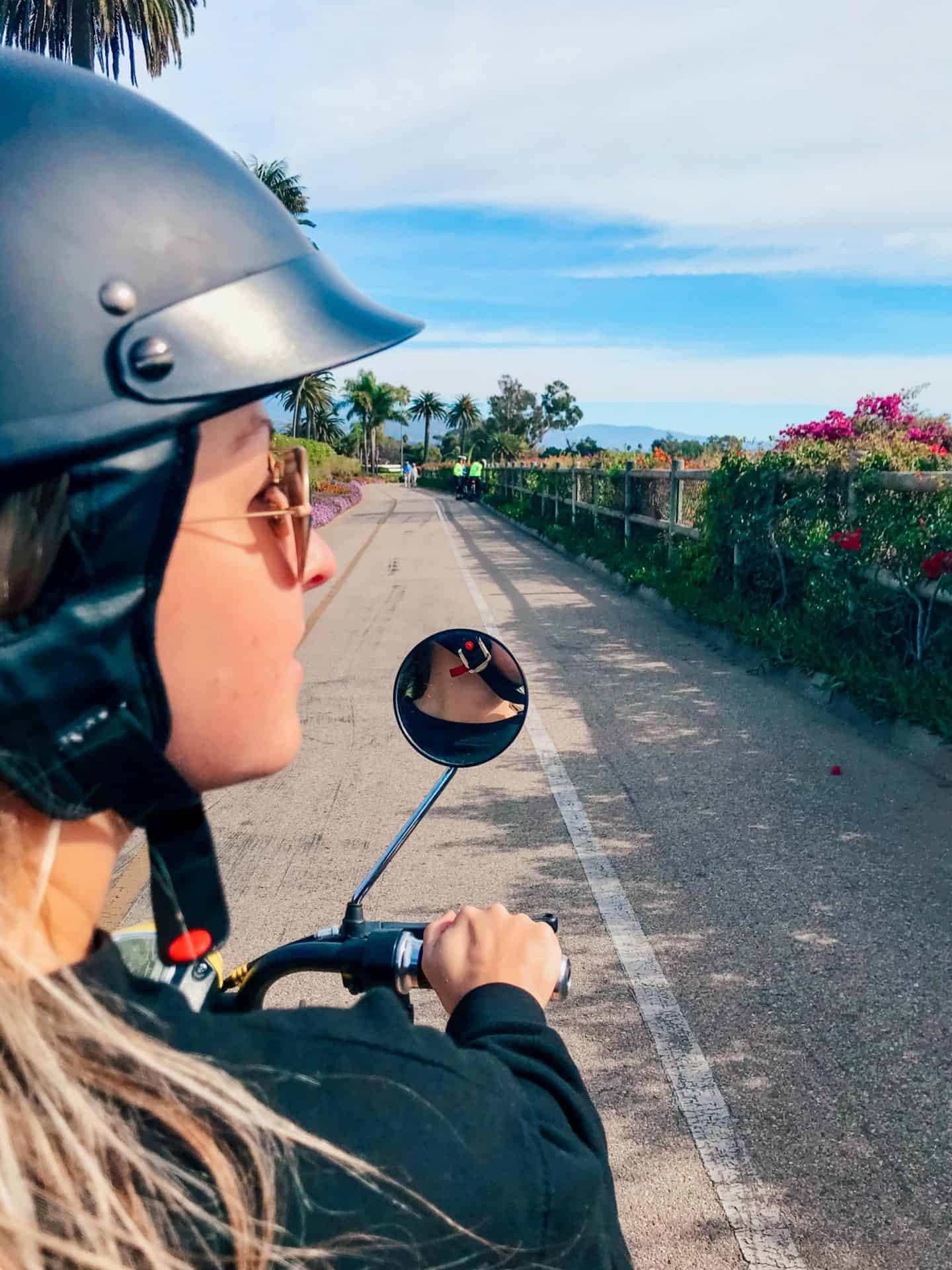 The Santa Barbara Airport services the city of Santa Barbara and is located 11-miles west of downtown.  Because it’s a small airport, other feasible options for arriving in Santa Barbara include flying into San Francisco, renting a car, and making a trip down the coast until you reach this beach town.  The total distance from San Francisco to Santa Barbara is approximately 300+ miles and will take nearly five hours without stopping.

Your other option is to fly into Los Angeles, rent a car, and drive 90+-miles, or an hour and a half to town.  If you aren’t interested in renting a car you can also take the Santa Barbara Airbus, which will pick you up at LAX and drop you off in Santa Barbara.  The price of a standard ticket for an adult is $60, one-way.

As far as needing a car to get around Santa Barbara, it’s a very walkable town and therefore a car isn’t necessary.  Plus, with Uber and Lyft operating in the city you can always get a rideshare if you need to go somewhere too far to walk, but close enough to drive.  However, if you plan to venture outside of Santa Barbara to explore different areas, then a car is necessary. 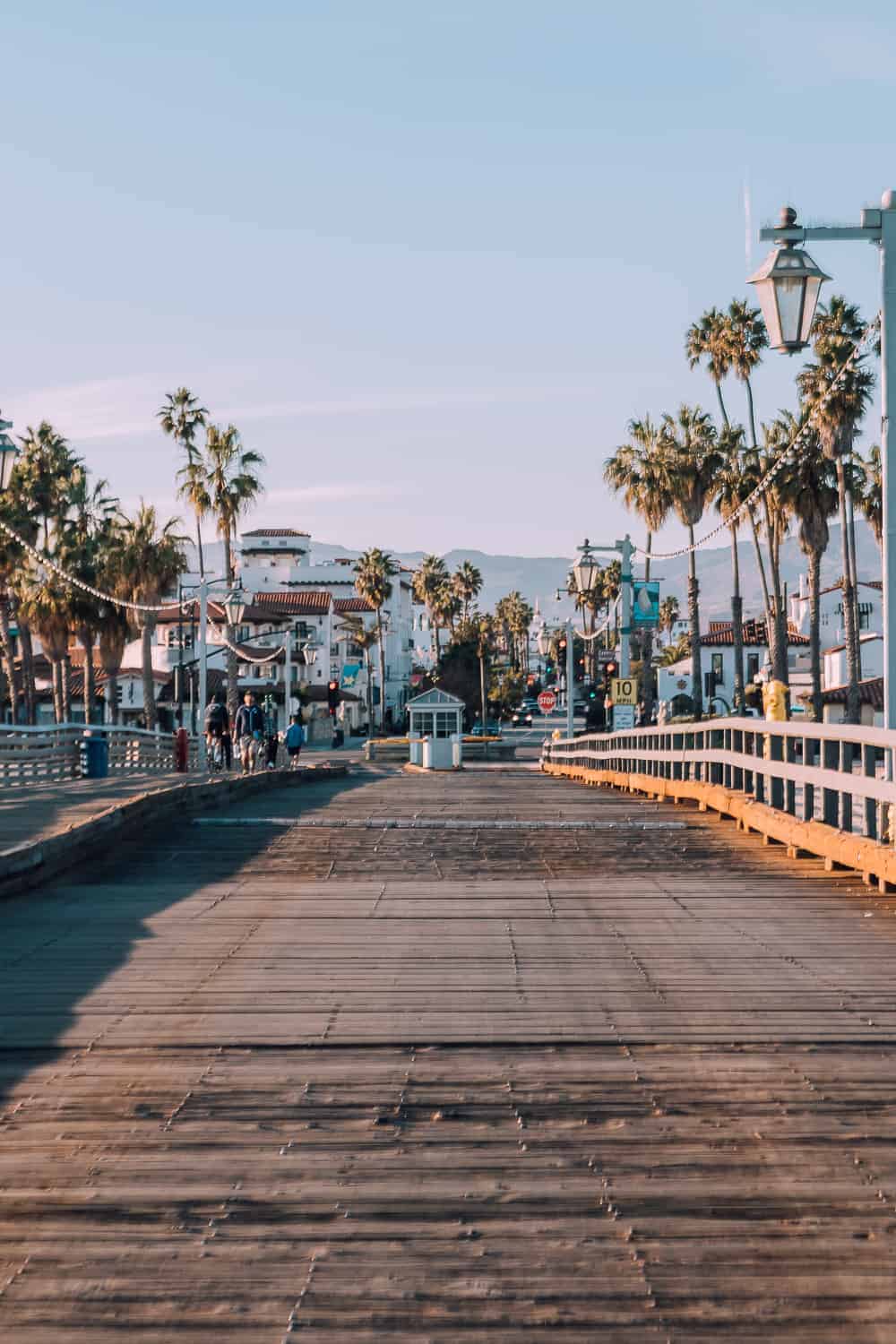 Being in California, Santa Barbara has generally good weather all year round.  While summers can be blazing hot, fall through spring cools off to a mild 70 degrees.  While you won’t necessarily be able to layout on the beach and jump into the ocean, I recommend coming in “shoulder season”, or October-April.  You’ll experience milder temperatures and fewer crowds, thus hotel rooms will be more affordable during this time. 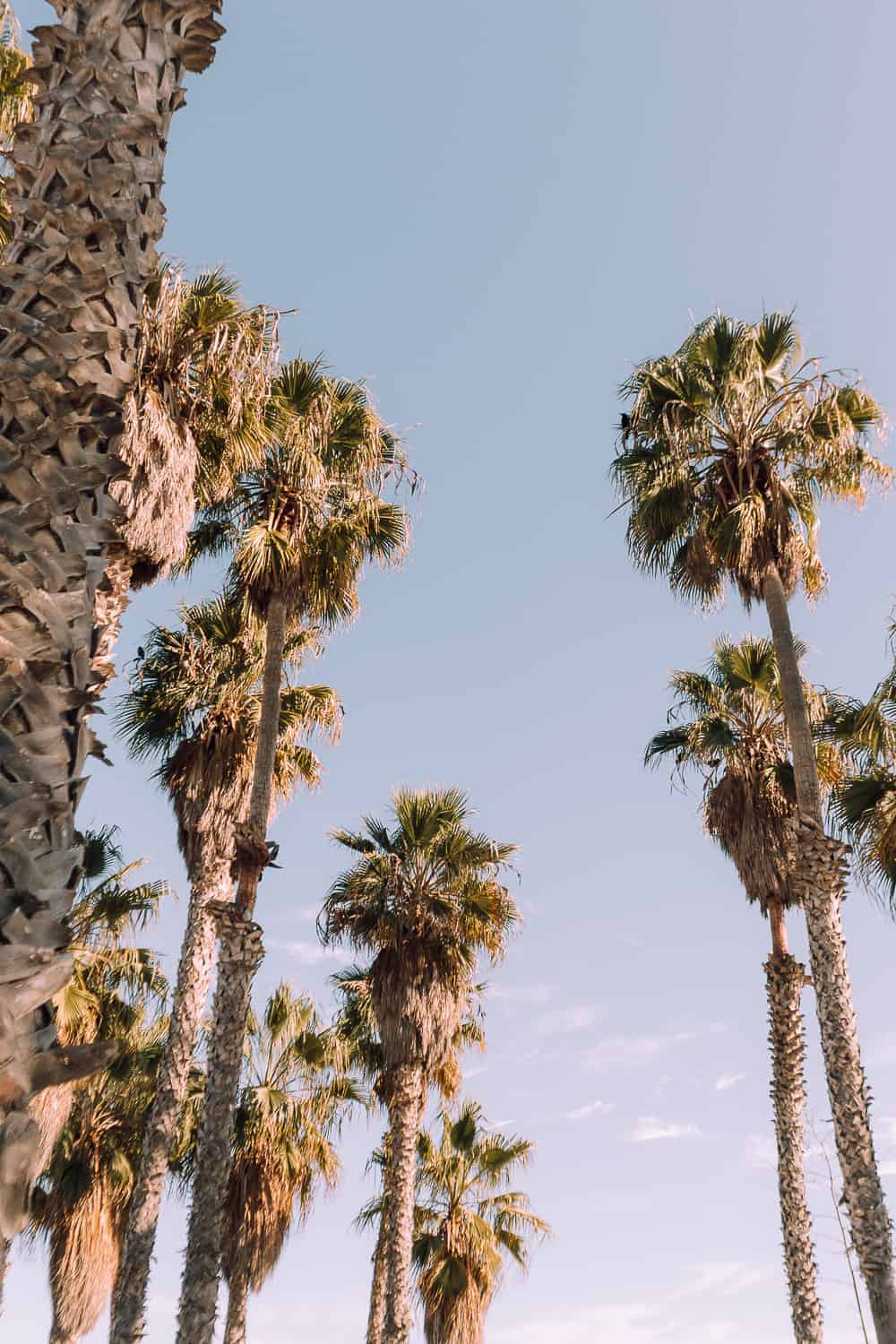 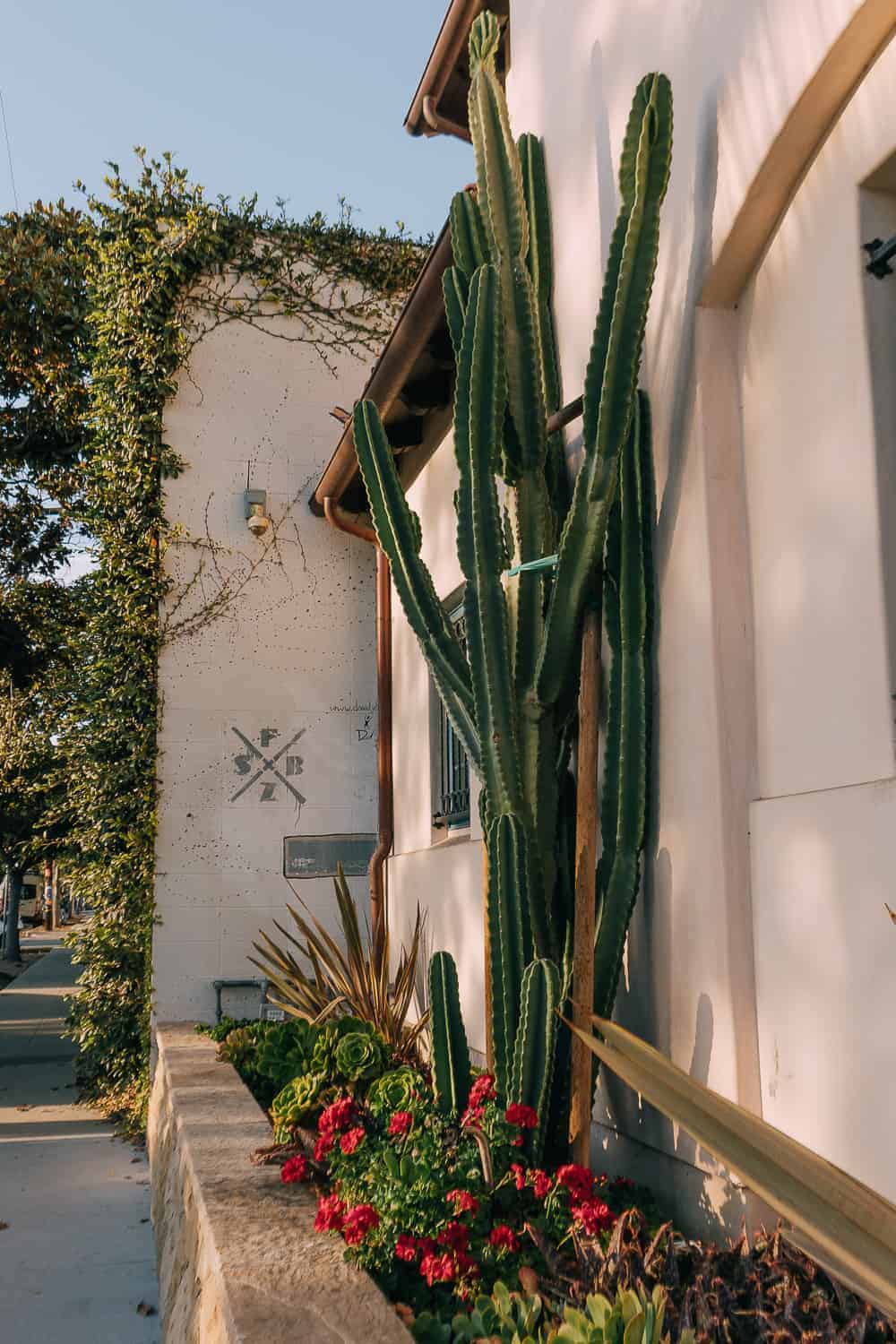 Stretching for 42 square miles, Santa Barbara is relatively easy to see on a short weekend trip.  With beaches, wine rooms, incredible food, and easy day trips around; there are so many fun things to do in Santa Barbara.

Below you’ll find highlights of the area, plus how to maximize spending two days in town.

Highlights/Things to Do in Santa Barbara & Surrounding Areas 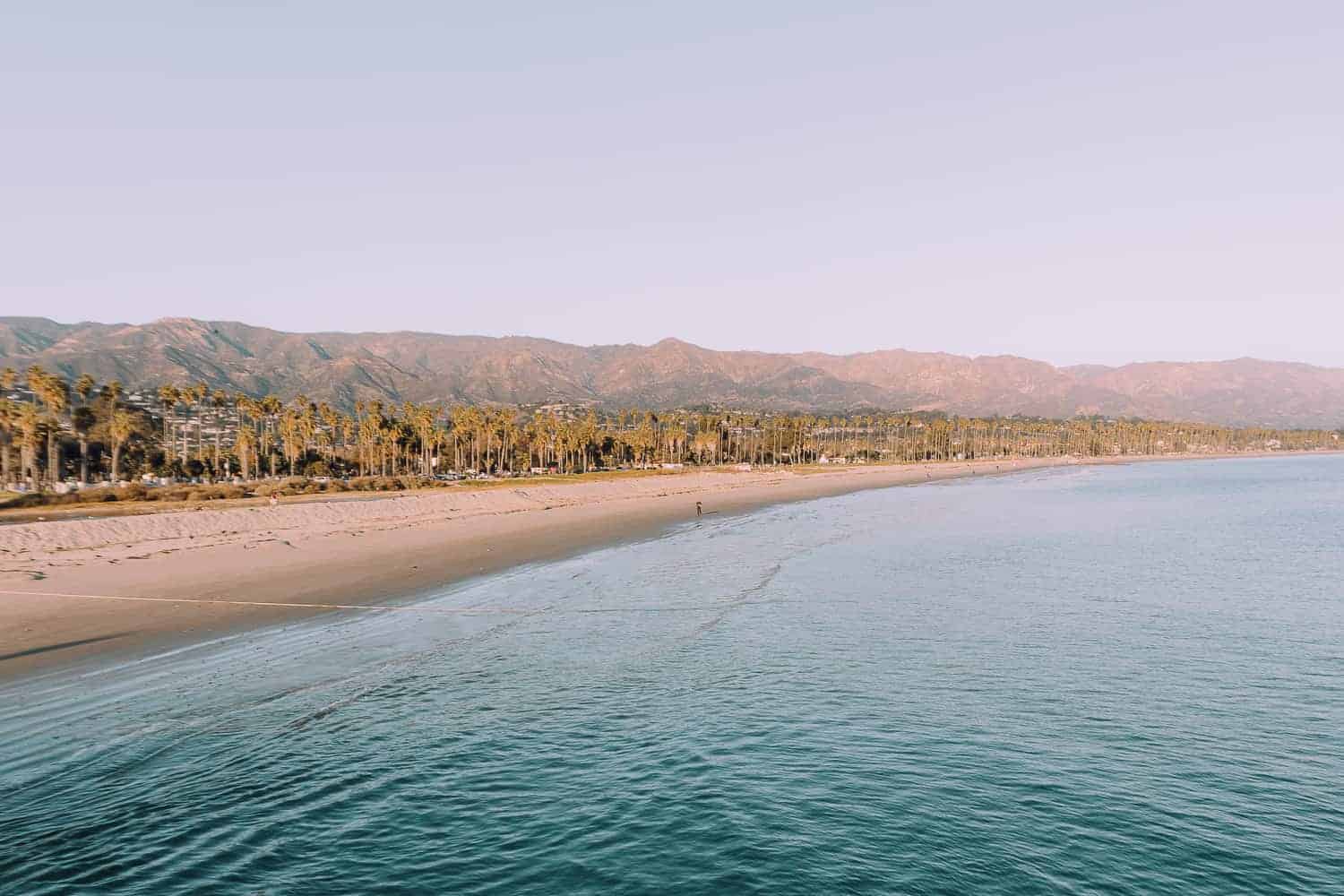 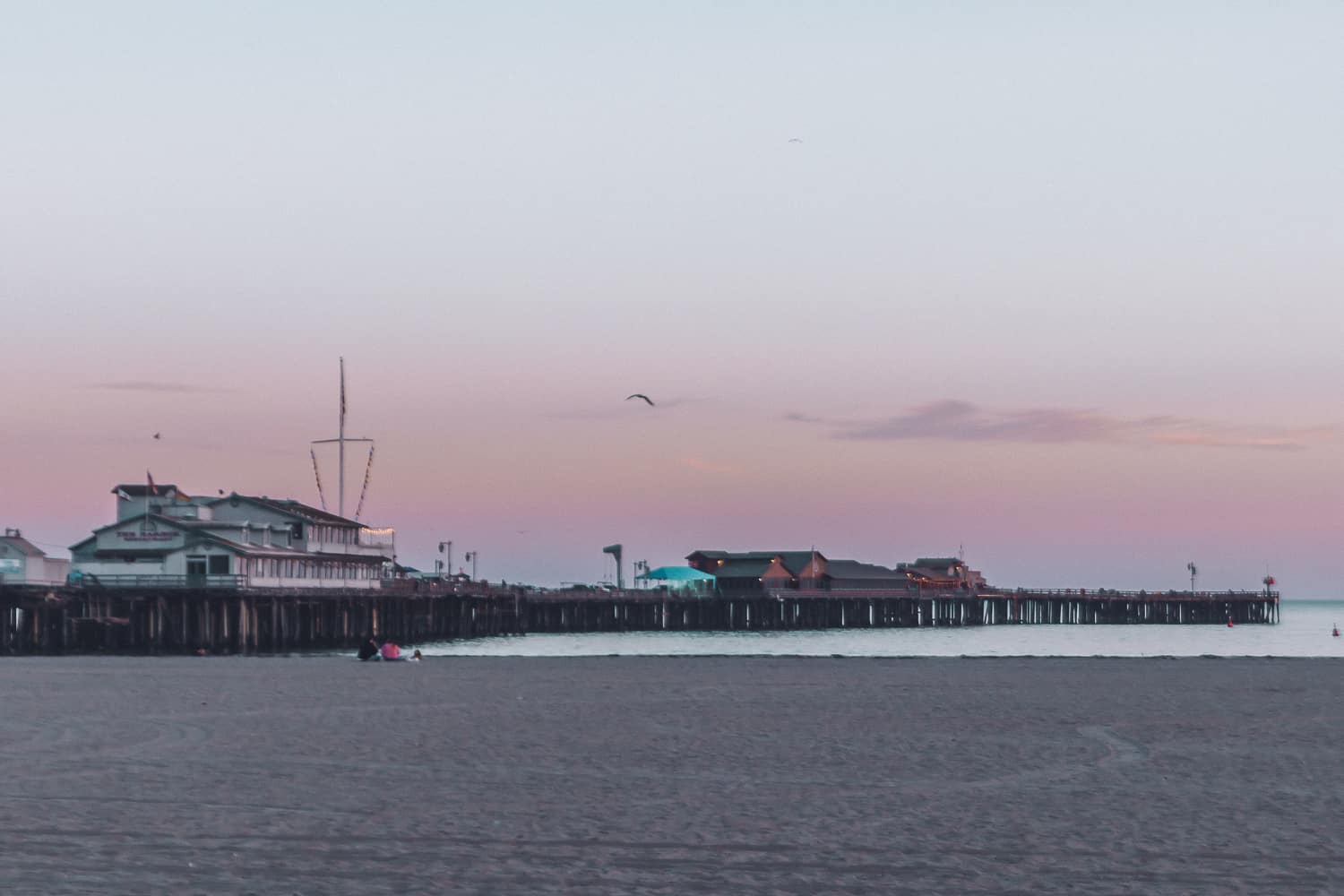 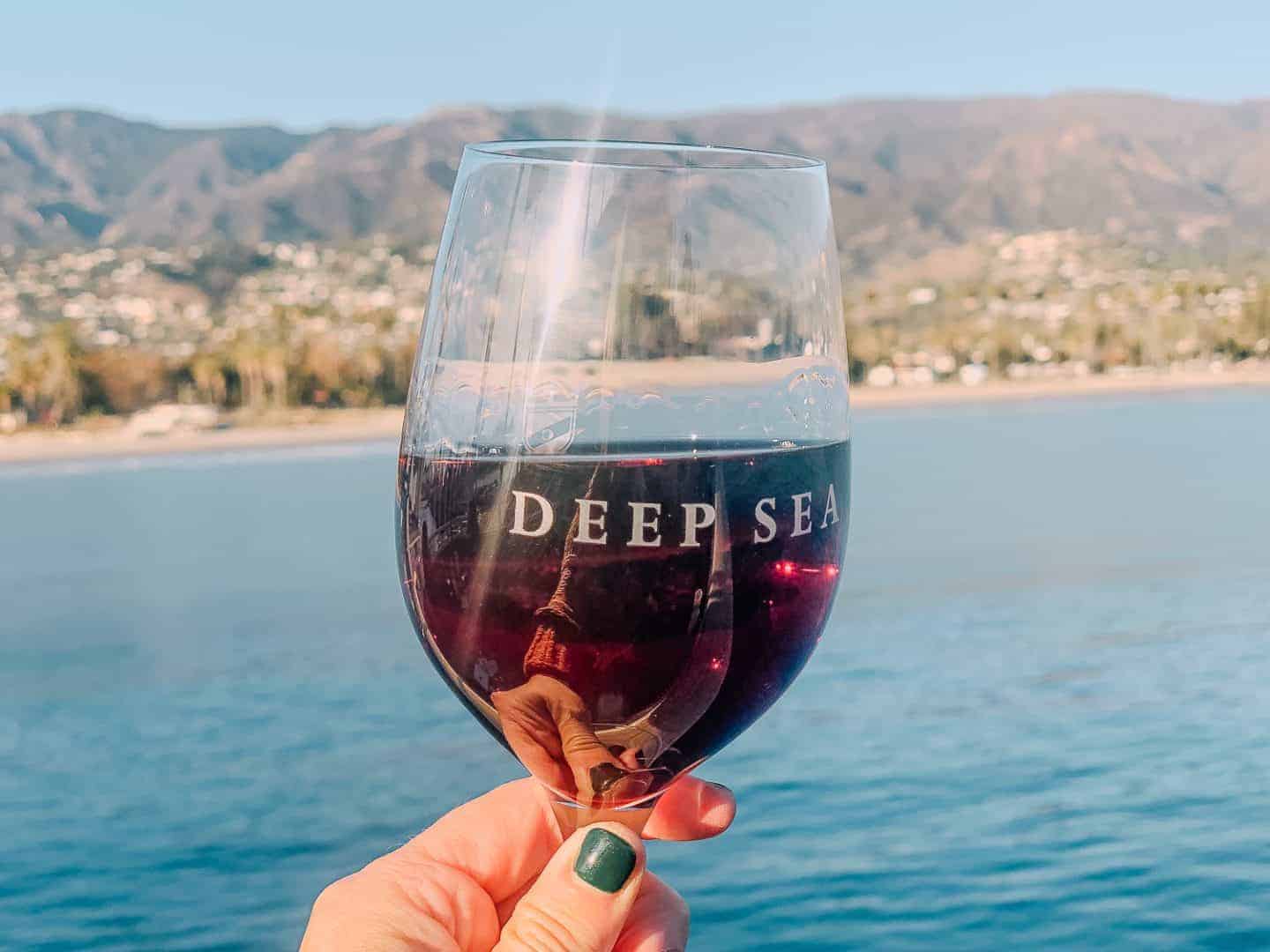 On your first day in Santa Barbara, begin your morning by walking 3-miles along Cabrillo Blvd east to Montecito.  Montecito is a town for the rich and famous, where big-name celebrities (like Oprah), have homes.  While you’re in Montecito, walk along Coast Village Road where you’ll find bars, restaurants, and boutique shops.  For breakfast, eat at Jeannine’s, or stop at Blender’s in the Grass for a quick smoothie or acai bowl.  While on Coast Village Road, stop in at Whiskey & Leather, a fun and affordable boutique store.

Walk back to downtown Santa Barbara, or get a rideshare and head straight to State Street.  I recommend starting near Corepower Yoga, and make your way down the street until you get to Stearns Wharf.

State Street is the main street in Santa Barbara with bars, restaurants, and boutique shops.  It’s incredibly pedestrian-friendly, with roads oftentimes blocked off for people to walk in the streets.

From State Street continue walking towards the Pacific Ocean until you reach Stearns Wharf.  Completed in 1872, Stearns Wharf is the longest deep-water pier between Los Angeles and San Francisco.  Stearns Wharf has kitsch tourist shops, ice cream shops, and restaurants; but my favorite stop is the wine tasting room Deep Sea.  Deep Sea Tasting Room sits above the pier, over the ocean giving you sweeping views of Santa Barbara and the San Ynez Mountains.

The Santa Barbara Funk Zone is located east of State Street and is a vibrant area of restaurants, bars, and mainly wine tasting rooms.  It’s the biggest part of the Urban Wine Trail, a trail that is composed of 33 different wineries, created in 2007 by eight winemakers.  The goal of the Urban Wine Trail was to allow people the opportunity to learn about and taste the wines from different varietals across the area.

For more on the Funk Zone, and which tasting rooms to visit, read Santa Barbara Funk Zone Wineries – A Guide to the Wine Tasting Rooms 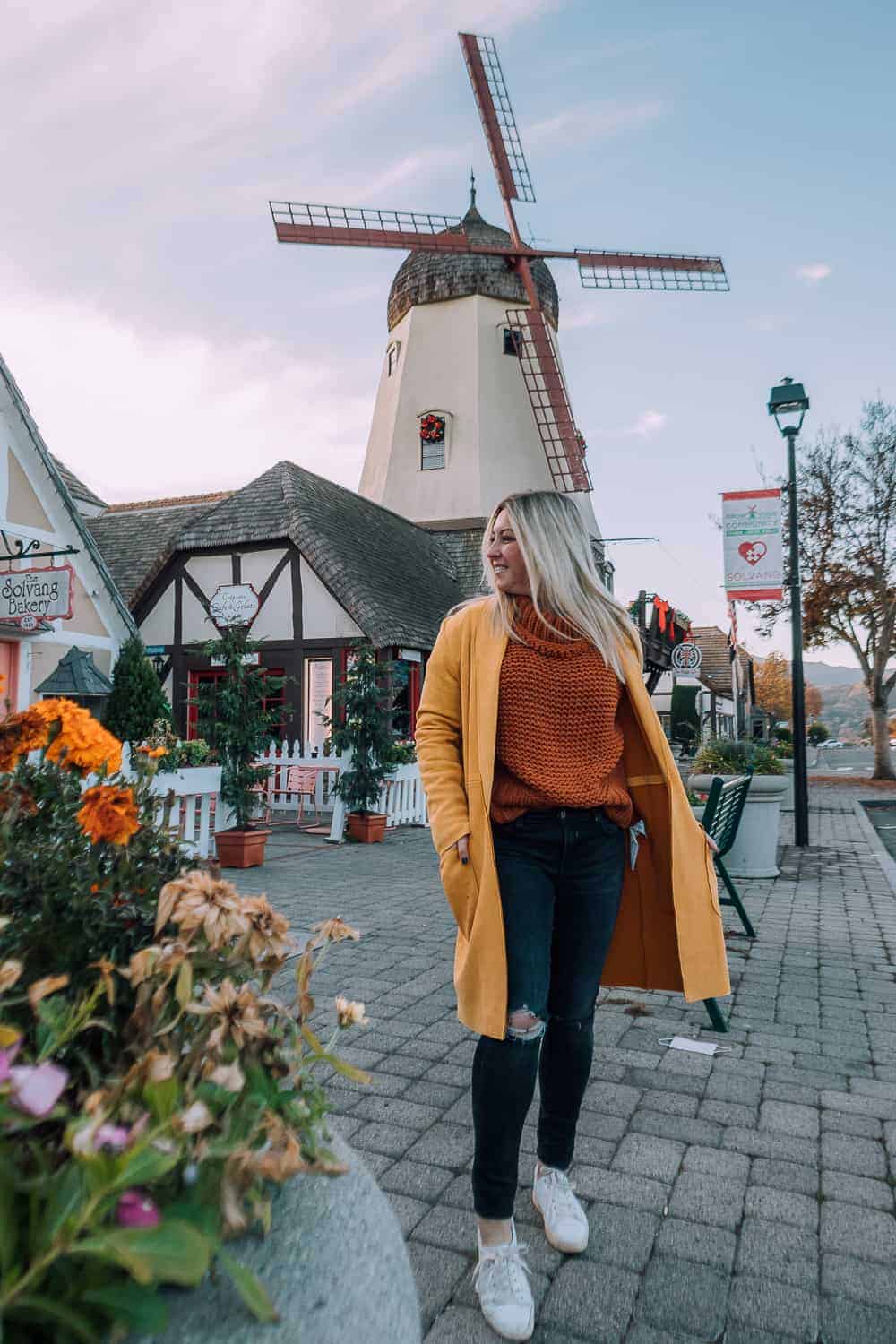 Begin your day in Santa Barbara at Hendrys Beach (also known as Arroyo Burro Beach), a dog-friendly and surf-friendly beach 3+-miles southwest of downtown. Walk along the beach or brunch at Boathouse, a restaurant most famous for its bloody marys and benedicts.

From Hendry’s head northwest to the wine tasting region, Los Olivos.  Los Olivos is located in the heart of the Santa Ynez Valley and is home to vineyards, 30+ tasting rooms, restaurants, and more.  It’s an ideal getaway outside of Santa Barbara if you’re looking to try some of the wine that grows in the area.  I recommend arriving early, most tasting rooms in the area close around 5 pm and weekends can get crowded.

Once you arrive in Solvang, you’ll feel as though you’ve left America and have arrived in Europe without needing a passport or crossing the Atlantic.  The town itself is surrounded by rolling hills and adorned with classic Danish-style architecture.  You can visit more wine tasting rooms here, or grab dinner before heading back to Santa Barbara.

For a more comprehensive guide to Solvang, don’t miss The Ultimate Guide to Visiting Solvang, California 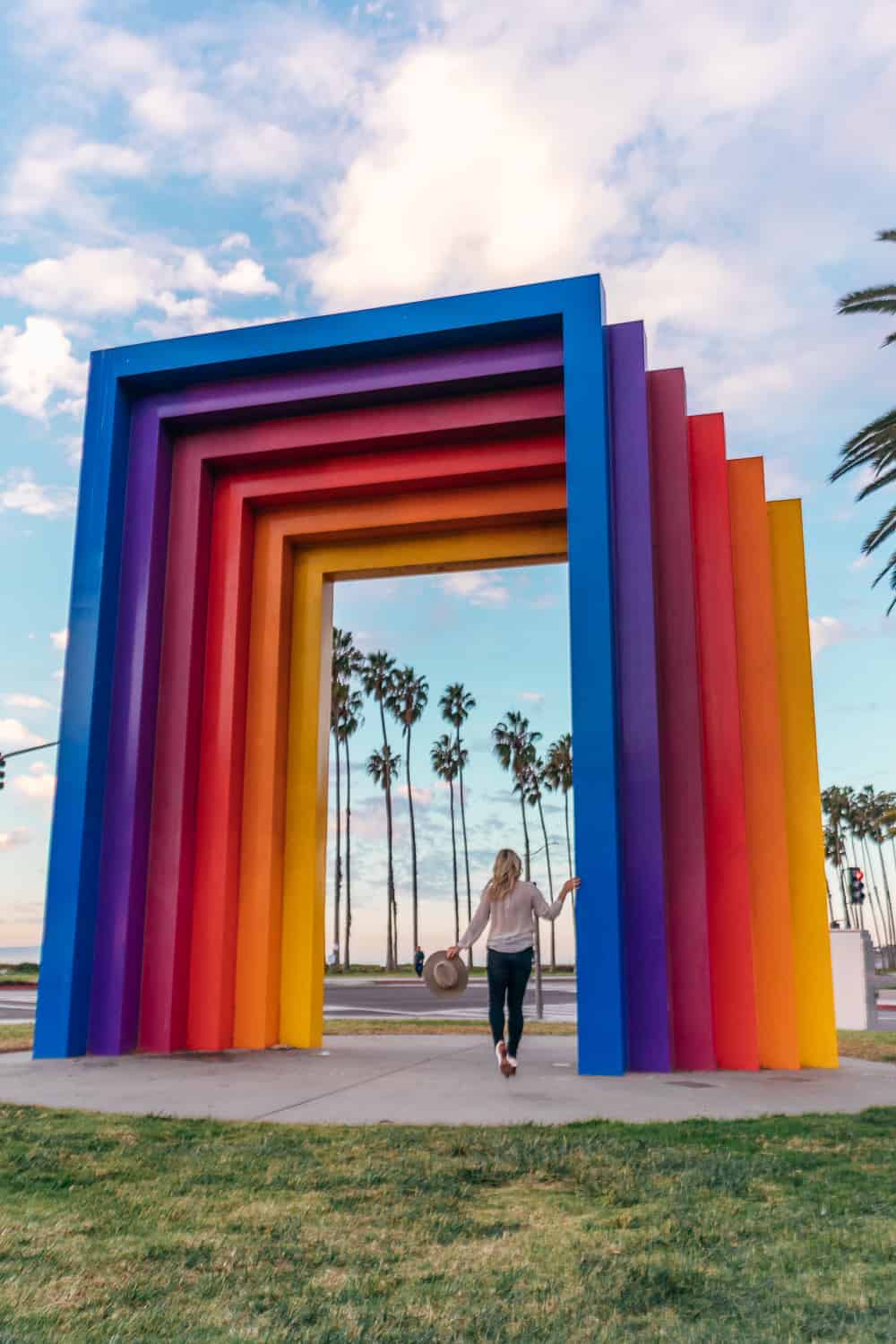 If you have additional time in Santa Barbara, there are tons more ways to fill your time.  Visit Butterfly Beach in Montecito, the mountainside western saloon, Cold Spring Tavern, or spend time in the Santa Barbara Public Market.

If Santa Barbara is just a quick stop on an extensive California trip, head north to explore Carmel, Monterey, and San Francisco; or instead go south to see Malibu, Los Angeles, and San Diego.

This ultimate Santa Barbara itinerary will guide you through planning a weekend escape in one of the most beautiful beach towns in California.  Explore Santa Barbara and surrounding areas to get a complete feel for Central California.

For more on Santa Barbara, make sure to check out

Places to Eat in Santa Barbara – 10 Restaurants You MUST Try 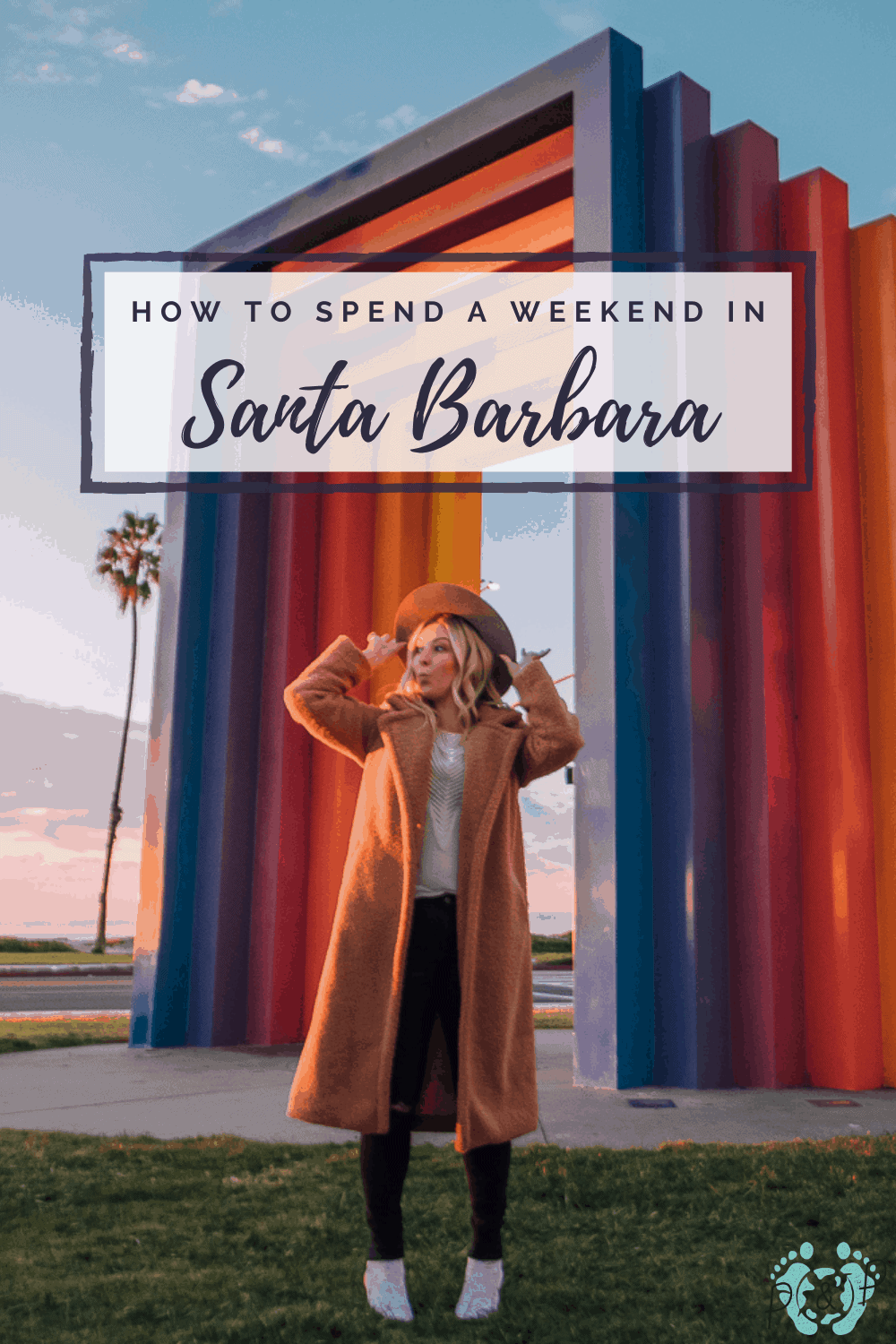 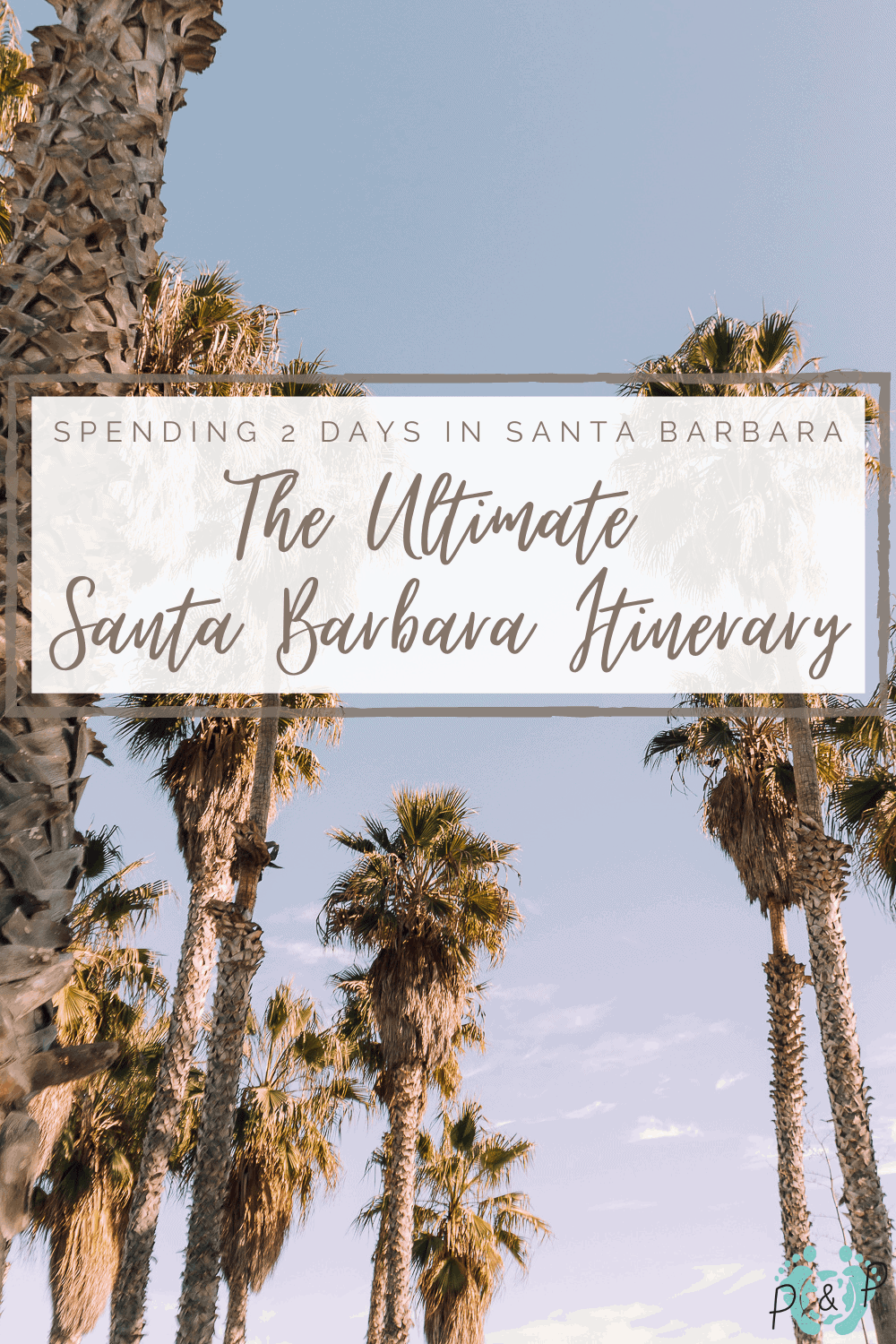 END_OF_DOCUMENT_TOKEN_TO_BE_REPLACED

20 Georgian Foods You Have to Try When You Visit Georgia

How to Stay Healthy As a Travel Nurse