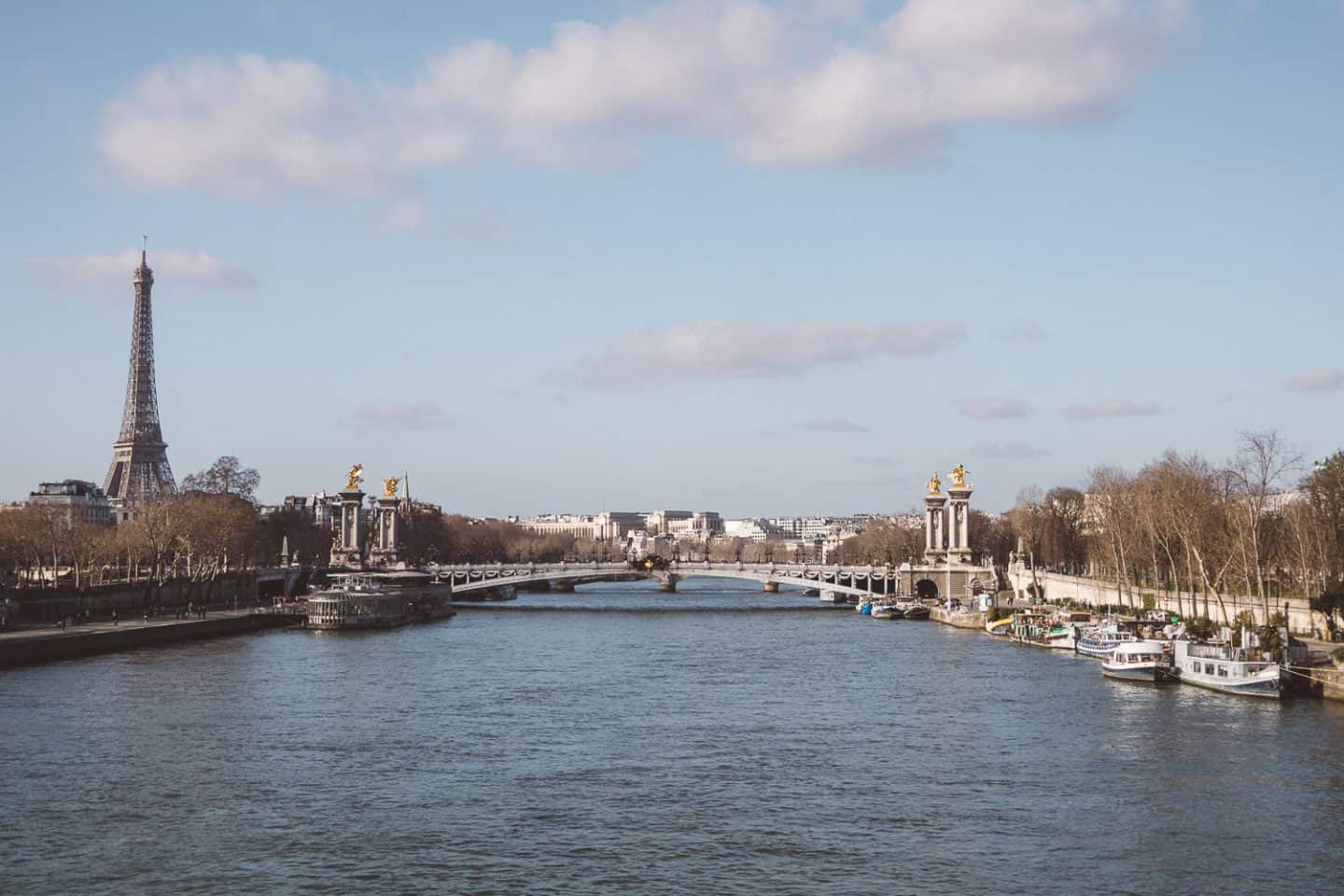 It’s no secret that Paris is one of the most sought after travel destinations.  In fact, in 2018 Paris welcomed the most tourists it ever has with a whopping 17,000,000+ people visiting.  The city is an incredible mix of old and beautiful, but also busy and buzzy with trendy bars and restaurants.  There’s something for everyone from kids to adults whether you enjoy walking around museums, lying around in parks, shopping, eating, or drinking espresso in outdoor cafes.  The city brings out a sense of wonder and thoughtfulness, invoking feelings of gratitude for the art of slowing down and taking your time, savoring every moment. 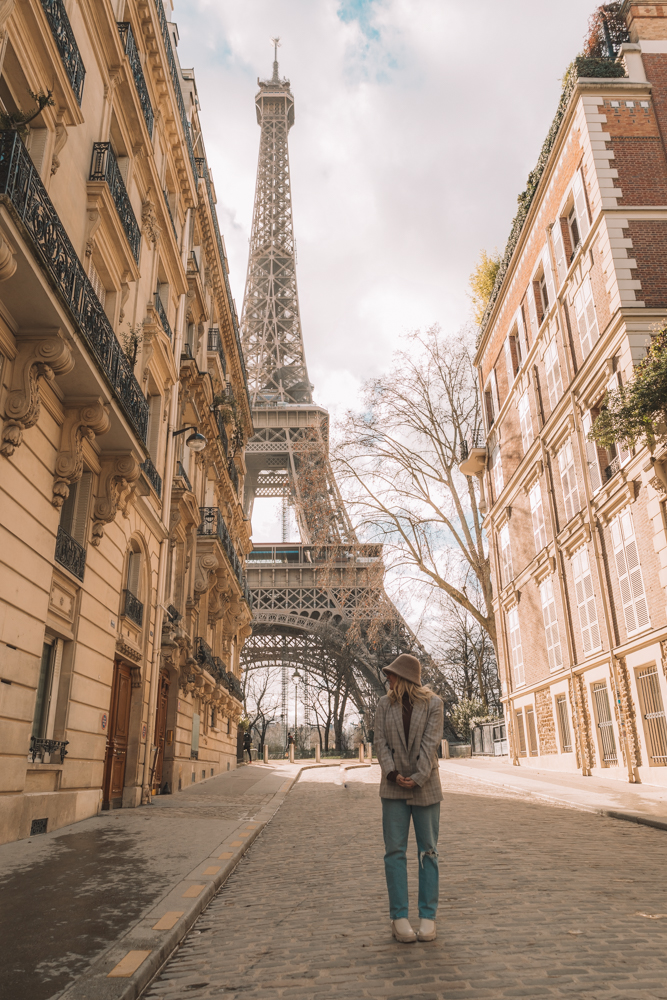 When is the Best Time to Visit Paris? 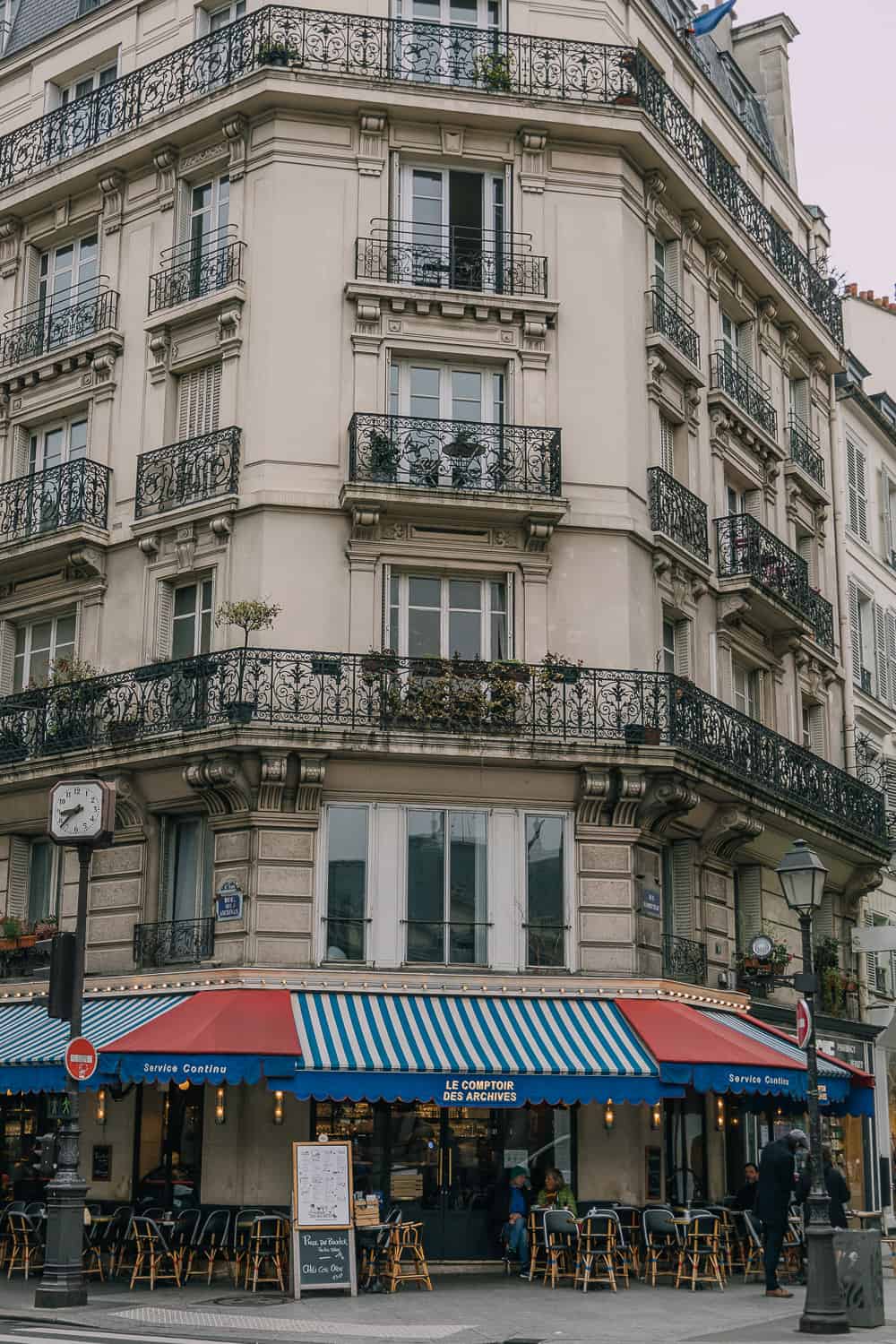 Truthfully, there is no bad time to visit Paris, but it depends on what you’re looking for.  Paris experiences all four seasons – spring, summer, fall, and winter – and each season brings something magical to the city.  In the spring (March-May), the weather starts to warm up from the chilly winter months and the sun sets later meaning you have more people getting out of the house and experiencing the city.  In the summer (June-August), the weather is at its peak and there is little to no rainfall.  The summer months also bring in the most tourists so if you’re looking to visit when there are fewer crowds, I’d avoid summer in Paris.  In the fall (September-December), the crowds leave Paris, the weather starts to change, and so do the leaves making fall in Paris absolutely beautiful.  And in the winter (January-February), the city sparkles under the glow of holiday lights.

Other things to take into consideration when you plan a trip to Paris is what do you want to get out of your trip?  Do you plan to hit the museums and stay inside all day?  If so, then perhaps winter is the best time to visit.  Do you want to experience the parks and walk the Seine?  Then maybe the spring or summer is the best time for you to visit.  Are you okay with large crowds and lines into museums or are you trying to avoid crowds?  I suggest writing down your dream trip (weather, activities, crowd size, prices) and from there decide what the best time of the year to visit would be.

I visited Paris in the winter and highly recommend it!  Read why here.

How to Get Around Paris 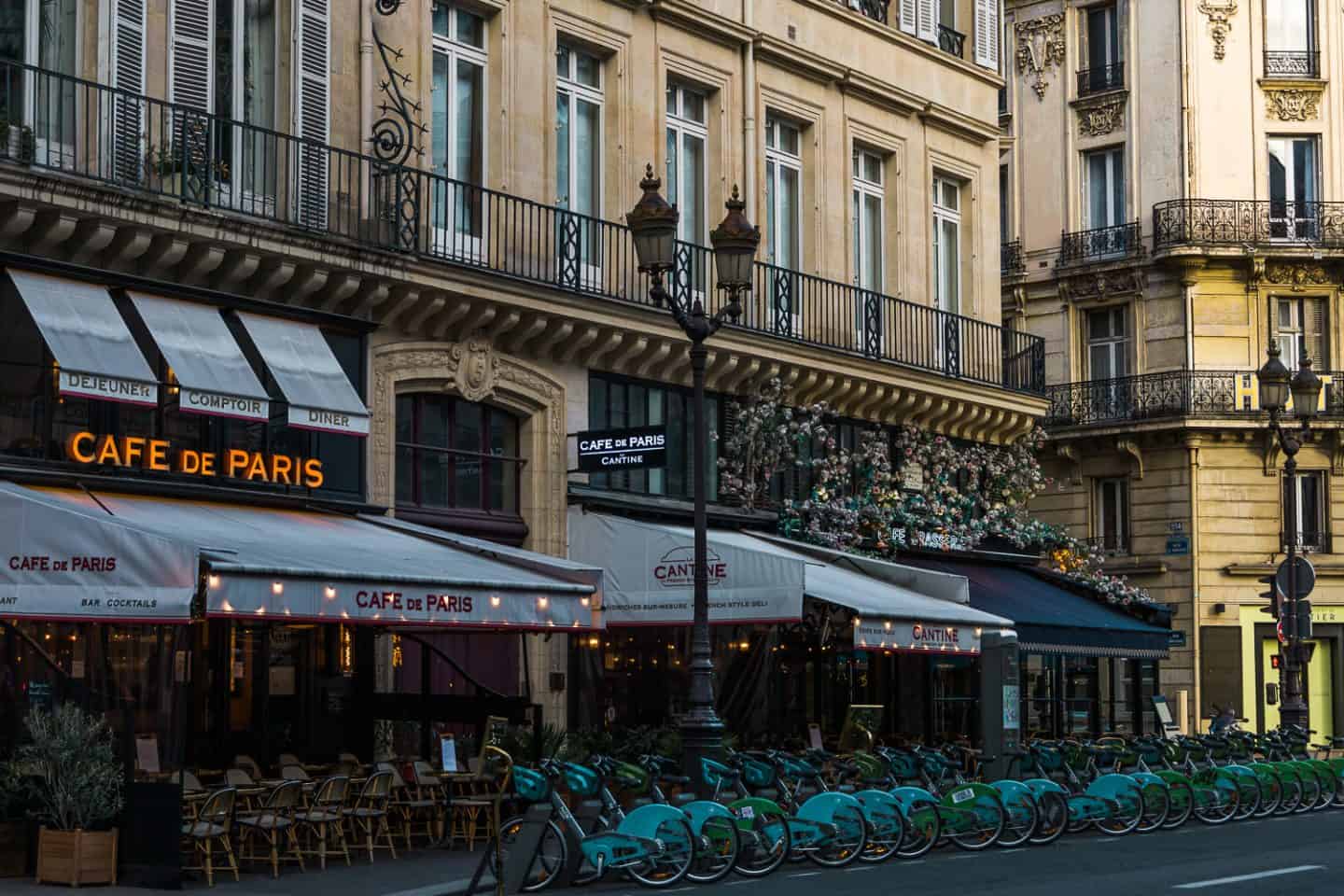 While Paris is a very walkable city, it’s also big so if you’re trying to get from one end of the city to the other it can be quite far.  Luckily, Paris has a reliable metro system and other means of transportation that make it quite easy to get around.

The metro in Paris has been around since 1900 when the first line opened.  Today there are over 300 stations and 136-miles of tracks around Paris, making Paris the third longest “line” in Europe behind London and Madrid.

The metro runs within the city of Paris from 5:30am to 1am.  With stops all over the city, it’s easy to find the metro; just search for the “M” sign and head underground.

Aside from the metro, Paris also has the RER train.  And while the two are different, they each connect with each other allowing you the ability to use the same travel cared between the two.  While the metro stays within Paris city limits, the RER connects to CDG Airport, Disneyland, and Versailles.  There are also two types of RER trains – an express train and a normal train.

Prices for tickets vary based on where you’re headed.  You can purchase tickets at each station with cash or a credit card.

Both Ubers and taxis are prevalent in Paris.  I suggest downloading the Uber app before arriving and making sure that your credit card is set up so that you can easily request rides.  Otherwise, you can find taxis around the city as well.  If you do take a taxi, the meter should be running as it’s illegal for a taxi driver to drive without it running.  Taxis take cash or credit card and tipping is not standard.

Biking is quite common in Paris and the city is very user friendly towards bicyclists with well-marked biking lanes and areas to park bikes.  Vélib’ is commonly found throughout the city with 1,400 docking points and 20,000 bikes (40% of them are electric).  Download the app ahead of time to rent a bike while you’re visiting Paris.

GETTING FROM THE AIRPORT (CDG) TO THE CITY

Charles de Gaulle is the main airport in Paris and is located about 20-miles from the city.  With traffic, it takes about an hour to get between the two and without traffic, about 30-minutes.  The cheapest way to get to the city is by taking the RER B train, which takes about 30-45 minutes.  For more information on taking the train from CDG to Paris, read this post.

You can also get to the city by taking a ride share, like Uber or a taxi.  In my experience, the prices were about the same and because there are so many taxis ready and waiting at the airport it might be easier to take a taxi.  Taxis have set prices to get from the airport to the city (and vice versa) with the price being 54 Euro.  It’s important to note that there are drivers at the airport that claim to be taxi drivers, often approaching you and asking “Do you need a taxi?  I can take you”, when they aren’t a licensed taxi driver.  Unless there is a “taxi” sign on top of the car you shouldn’t get in as this is usually a scam and your ride will cost way more than it should.

To get a taxi follow the signs and head outside.  There will be a line of taxis and you’re expected to get in the first taxi at the front of the line.  Every taxi will cost the same amount of money from the airport so don’t worry about getting in a van versus a car.

Where to Stay in Paris 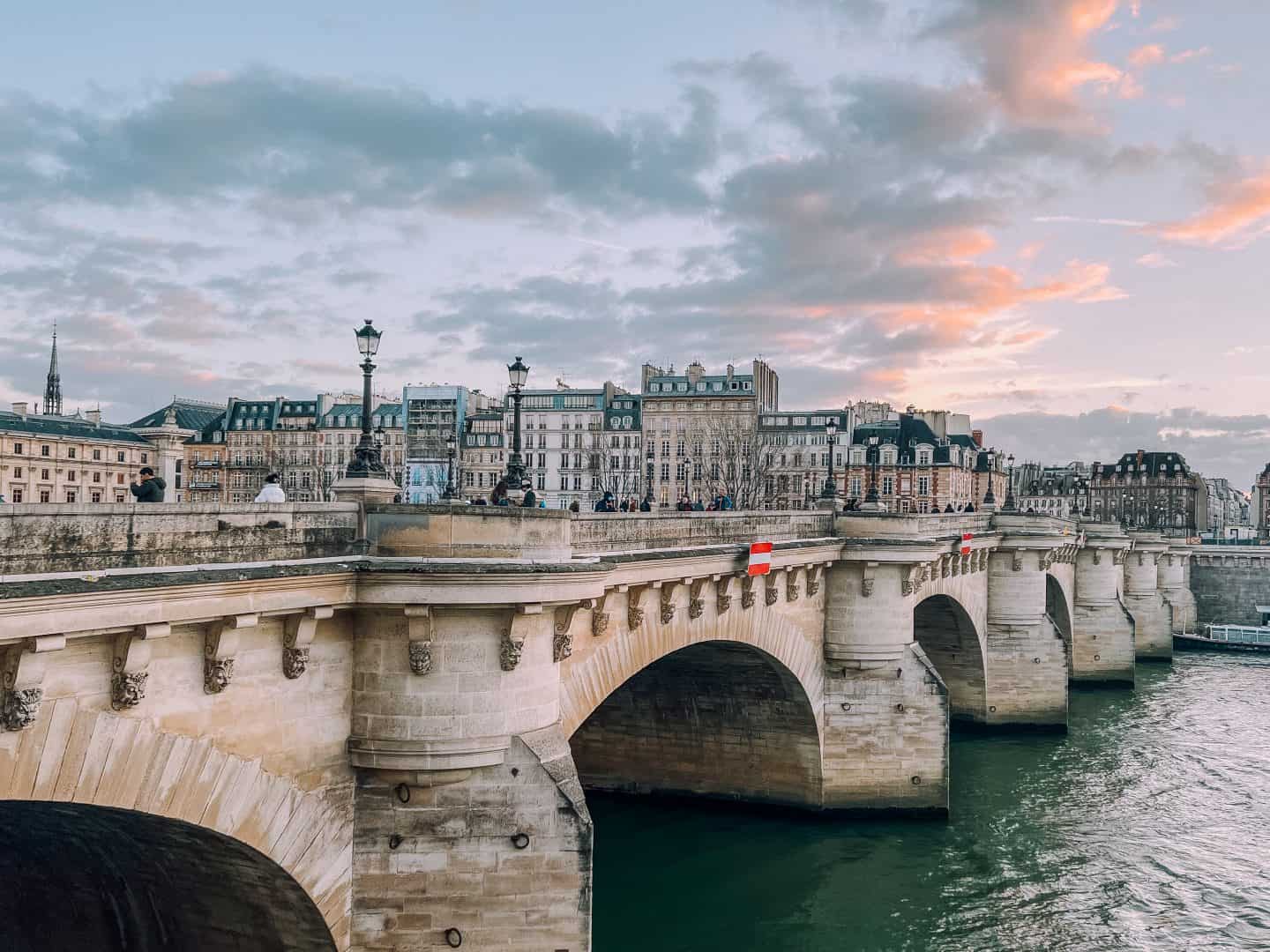 There are 20 different arrondissements (neighborhoods) in Paris, each offering something unique and special.  When choosing where to stay, I recommend mapping out a few places that you’re planning to visit and choosing where to stay based on that.  Below you’ll find some of the more common arrondissements to stay in and what is attractive about each. 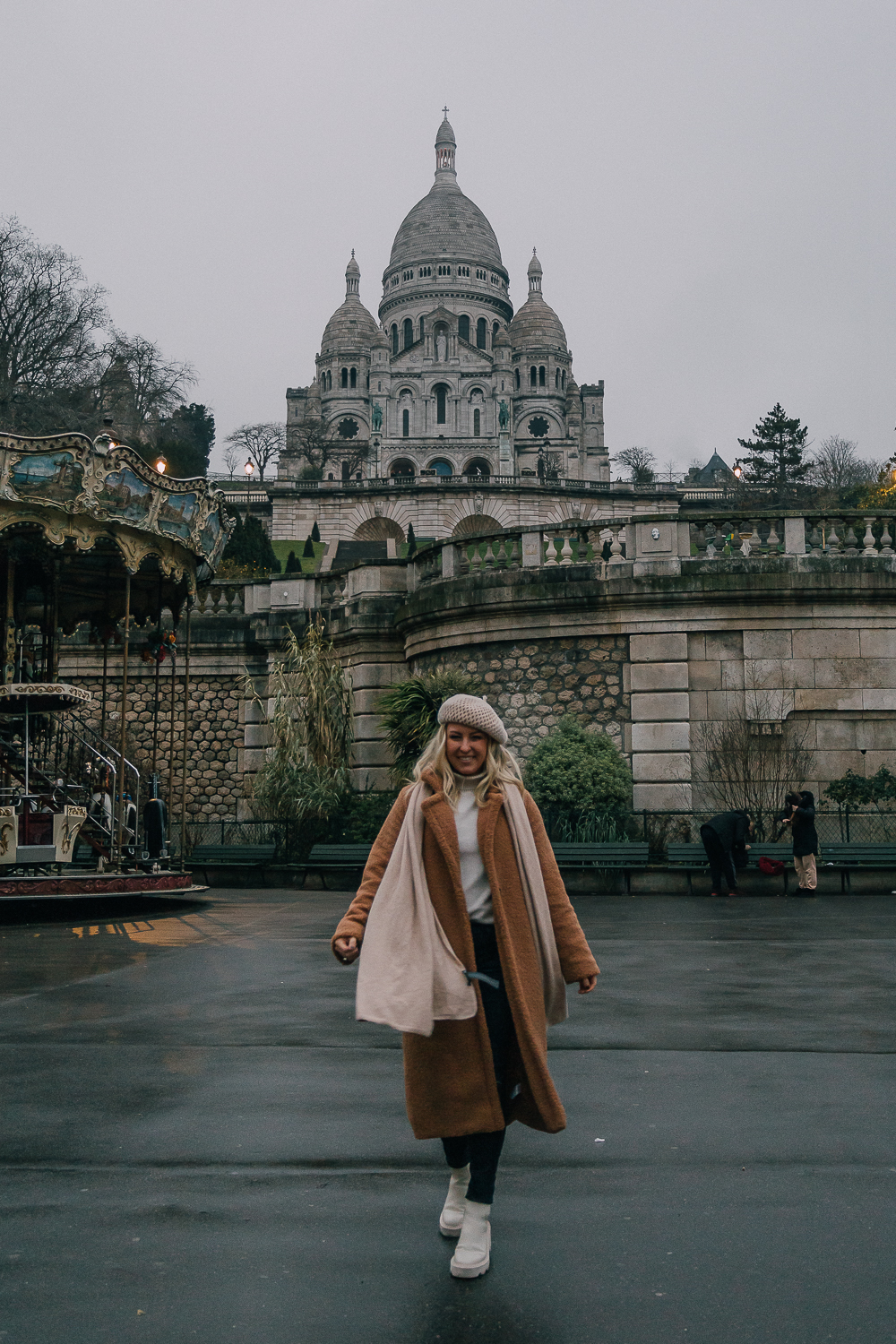 Just like any big city, every traveler should follow general safety tips (see below).  However, specific to Paris, the biggest thing to be aware of is that pickpocketing is common around the main tourist attractions like the Eiffel Tower and the Sacré-Cœur.  It’s common to find men outside selling trinkets and targeting tourists.

Budgeting for a Trip to Paris 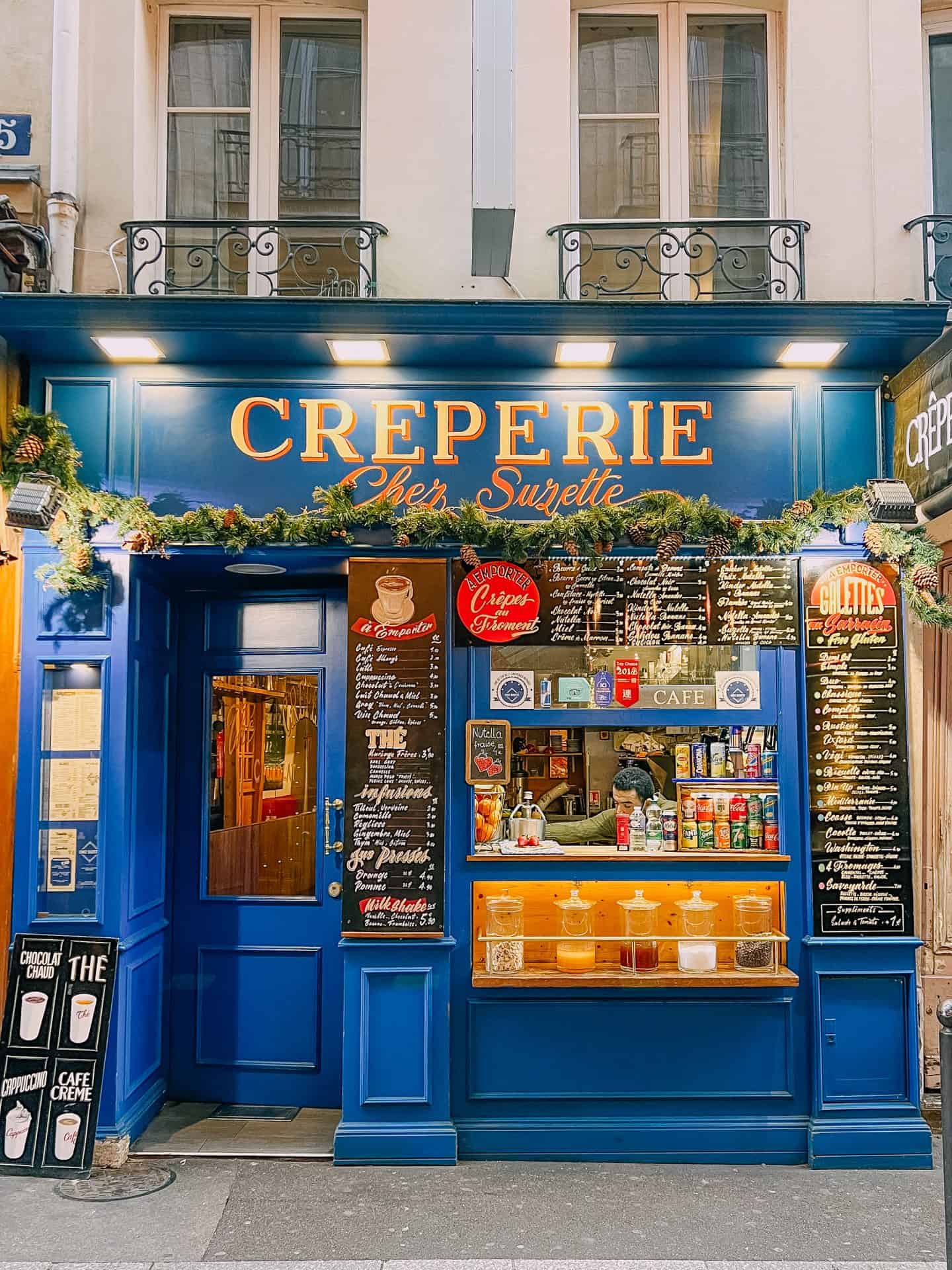 Paris is a glamorous city, but that doesn’t mean that you can’t visit if you’re on a budget.  While there is all the opportunity in the world for incredible high-end shopping and staying in 5-star hotels, there is also opportunity for free activities and to stay in cheaper accommodations.

If you find yourself visiting Paris on a budget, follow these simple tips for saving money! 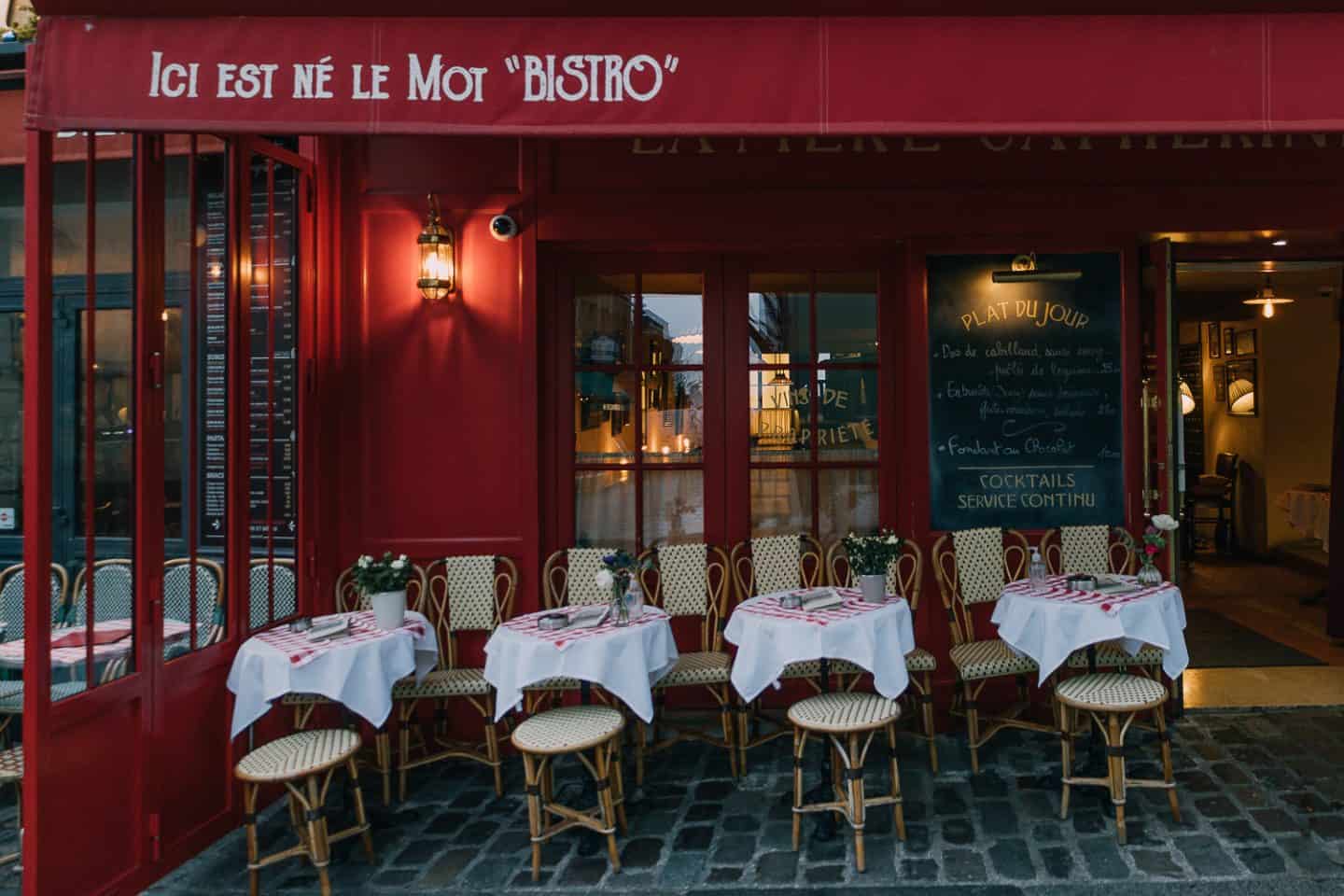 Eating out in Paris is quite the scene and it’s important to touch on dining etiquette as it’s much different than dining out in America.  For starters, the French don’t work on tips – the servers get paid a fair compensation so they aren’t there to impress you, but instead to serve your food and drink.  (This doesn’t mean that servers aren’t helpful and friendly, but they won’t go above and beyond for you like they do in the US because they don’t need the tip).  While tipping isn’t as common in America, if you dine at a nice restaurant or experience particularly good service you can leave a tip of your choosing.  If you’re paying with a card and don’t have cash, you can ask them to please add a tip onto your total bill before running your card.

When ordering at a restaurant, it’s common in France to order your entire meal at once.  Your starter, main course, dessert, and drink.  However, don’t feel pressured to order all at once, especially if you’re unsure if you’ll have room for dessert.  You can always order this later to complete your meal.

You should know that the French thoroughly enjoy taking their time and don’t rush through meals.  It was explained to me once that “meals are an intimate part of life and should be shared and enjoyed”.  In fact, at popular restaurants it can be hard to get a seat because patrons sit for hours just enjoying themselves and aren’t expected to leave just because they are done with their meal.

Because servers don’t work on tips and because the French take their time at meals, you may feel that your server has forgotten you or hasn’t been around in a while.  Instead of getting frustrated, embrace the lifestyle, slow down, and take your time.  Enjoy an entire bottle of wine before ordering your food.  Sit and read a book between dinner and dessert.  One of the best things you can do in Paris is sit at a restaurant and people watch, you can learn a lot about the culture by watching other people interact.

Lastly, the French value what their chefs create.  Unlike America, it isn’t common practice in France to order a meal and ask for requests with your meal.  “No cheese, extra bacon, sauce on the side, etc.”  If you do this you’re likely to be met with a stare and perhaps even a “no”.  If you’re a picky eater I recommend browsing the menu ahead of time to find a safe option or avoid eating out all together.

If you’re planning a trip to Paris, don’t miss these posts:

A Guide to Le Marais

From Paris:  A Day Trip to Versailles

From Paris:  A Weekend Trip to Mont Saint-Michel 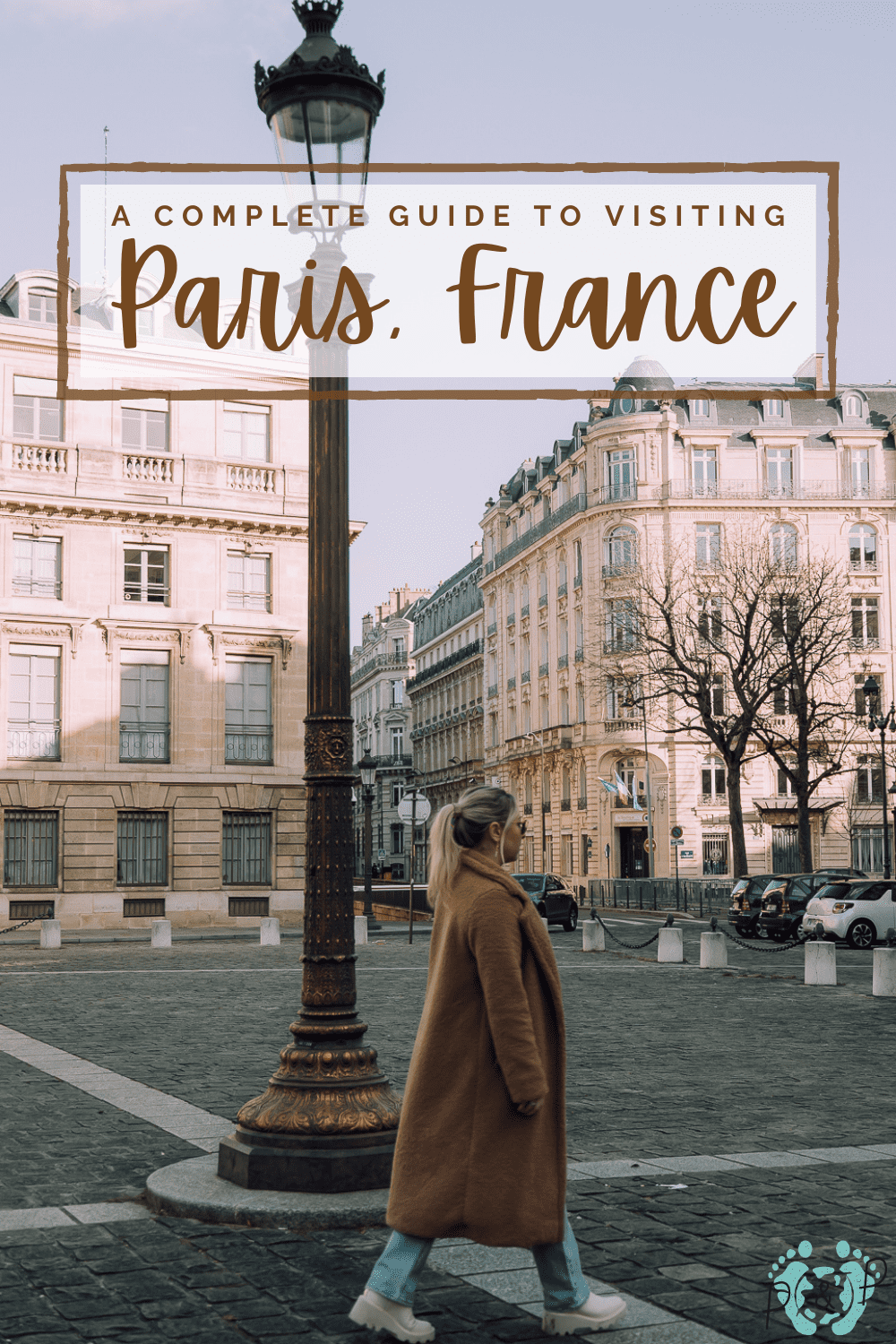 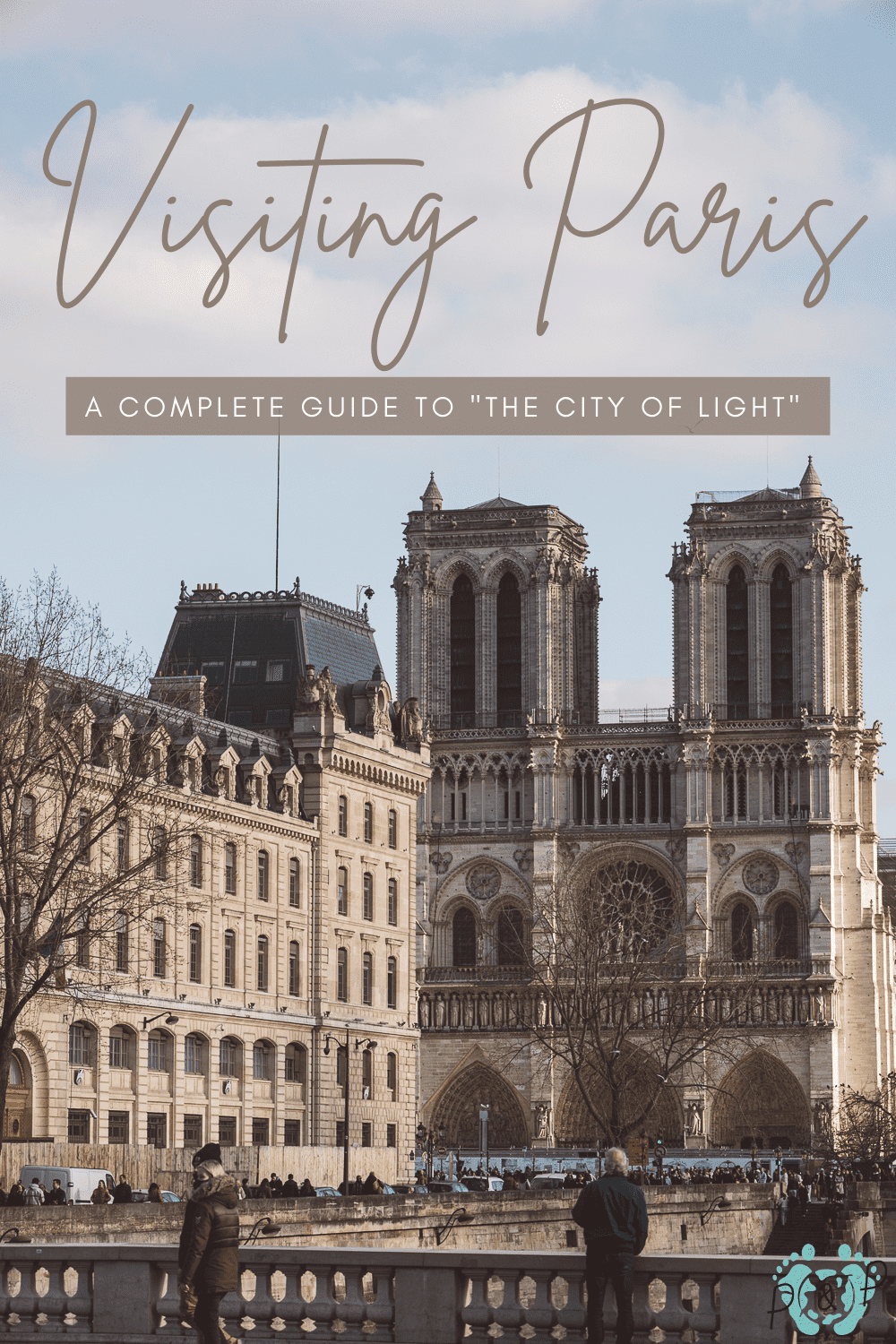