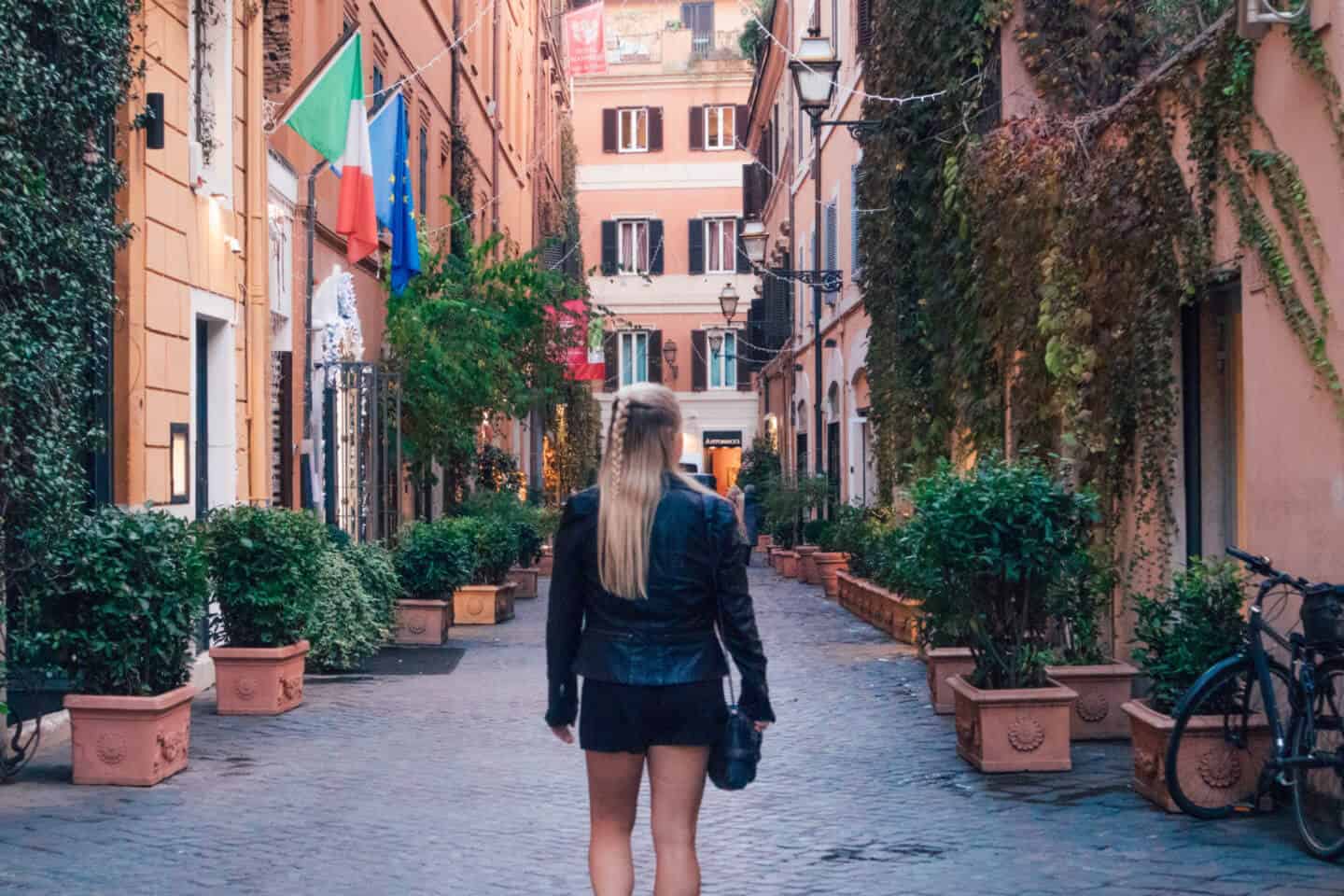 While some people have Italy at the very top of their bucket list, I came to fall in love with this country by happenstance.  I had found myself drinking one too many vodka martinis in Budapest (read about that here) when an intense desire to eat real, authentic Italian pizza struck.  What ensued was a last-minute flight to Naples (the birthplace of pizza) and ultimately the best two and a half weeks in Italy.  I took the train north from Naples and stopped in six different Italian cities.  Along the way, I fell in love with Italian landscape, architecture, food, wine, and three incredible Italian cities – Rome, Florence, and Verona.

This is part of my “8 Day Vacay” series!  A travel series aimed at nurses who are looking to take 8 days off from the hospital (with no need to take PTO) and travel to destinations both near and far.  For more information, read this post.

How to Spend 8 Days in Rome, Florence, & Verona

WEDNESDAY – Depart from the USA, fly into Rome, Italy 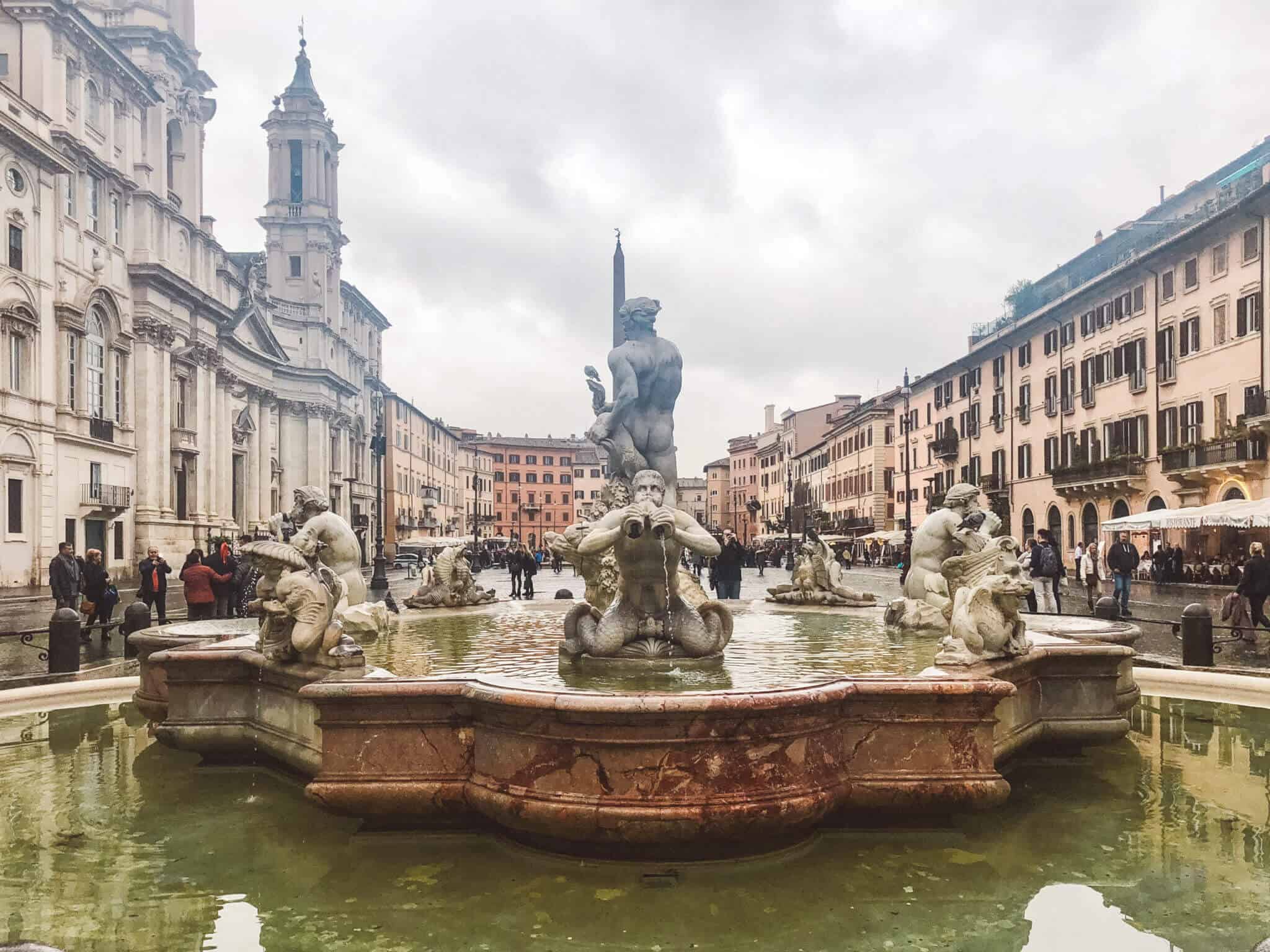 One of the easiest European destinations to get to from the USA, Italy is located smack in Southern Europe.  One of the reasons Italy is easy to access is because Rome is a big city with a big international airport.  For that reason, there are tons of flights in and out of the country each day.  When searching for flights, I prefer to compare prices on Kayak.

Tip:  If you’re coming from a small state (like me – Nebraska), I tend to search for options from the nearest international airport to bring down prices.  So for instance, I would search for flights out of Chicago instead of out of Omaha. 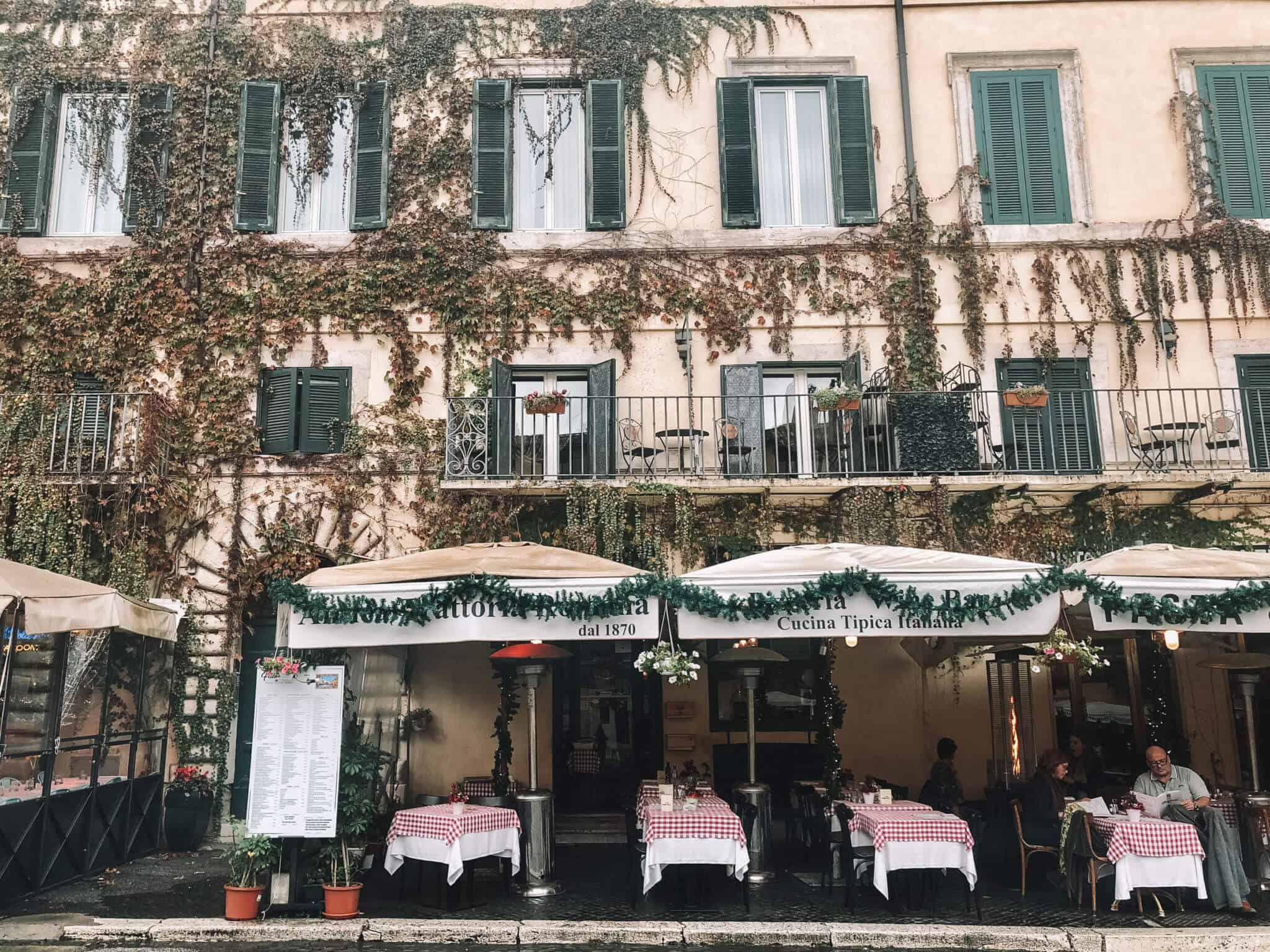 WHERE TO STAY IN ROME

Hotel Cosmopolita – A simple, no-fuss hotel in the heart of Rome.  Just minutes walking distance from both the Trevi Fountain and Colosseum, the location of Hotel Cosmopolita is what makes this hotel such a good deal.  If you don’t find that this hotel suits you, I encourage you to search on Airbnb or booking.com.

When I arrived in Rome I was filled with a sense of freedom and wanderlust.  It’s a city that is steeped in history and has managed to influence almost every corner of the world.  Walking through Rome is like walking through an outdoor museum. Everywhere you turn there is a piece of history in front of you, be it the Colosseum, the Trevi Fountain, the Vatican, and more.

The best part about Rome isn’t that walking through the streets sets you back in time and teaches you history along the way.  It’s that Rome quite literally has everything to offer.  Food, wine, weather, and friendly locals.  In Rome, there is something for everyone.

Upon arriving in Rome, and dropping off your luggage hit one of the most famous sites in Rome. The Trevi Fountain.  Of Baroque style architecture, the Trevi is one of the most famous and recognized fountains in the world.  Throwing coins in the Trevi is common practice, and it’s estimated that 3,000 Euros are thrown into the fountain every single day.  The money is collected at intervals and has been used to build a supermarket for Rome’s underprivileged.  It’s found in the Trevi District, surrounded by cafes, bars, and restaurants.

From the Trevi, make a stop at Giolitti, a gelato stop, before making your way ten minutes north to the Spanish Steps.  Arrive at sunset, gelato in hand, to see the sun drop behind the city, illuminating the buildings and painting the sky a burnt orange. A five-minute walk further north will bring you to one of Rome’s most picturesque streets – Via Margutta.  Stroll down the street as dusk settles in on Rome, taking in the romantic feeling of being in the Eternal City and enjoying one of Rome’s quieter streets. 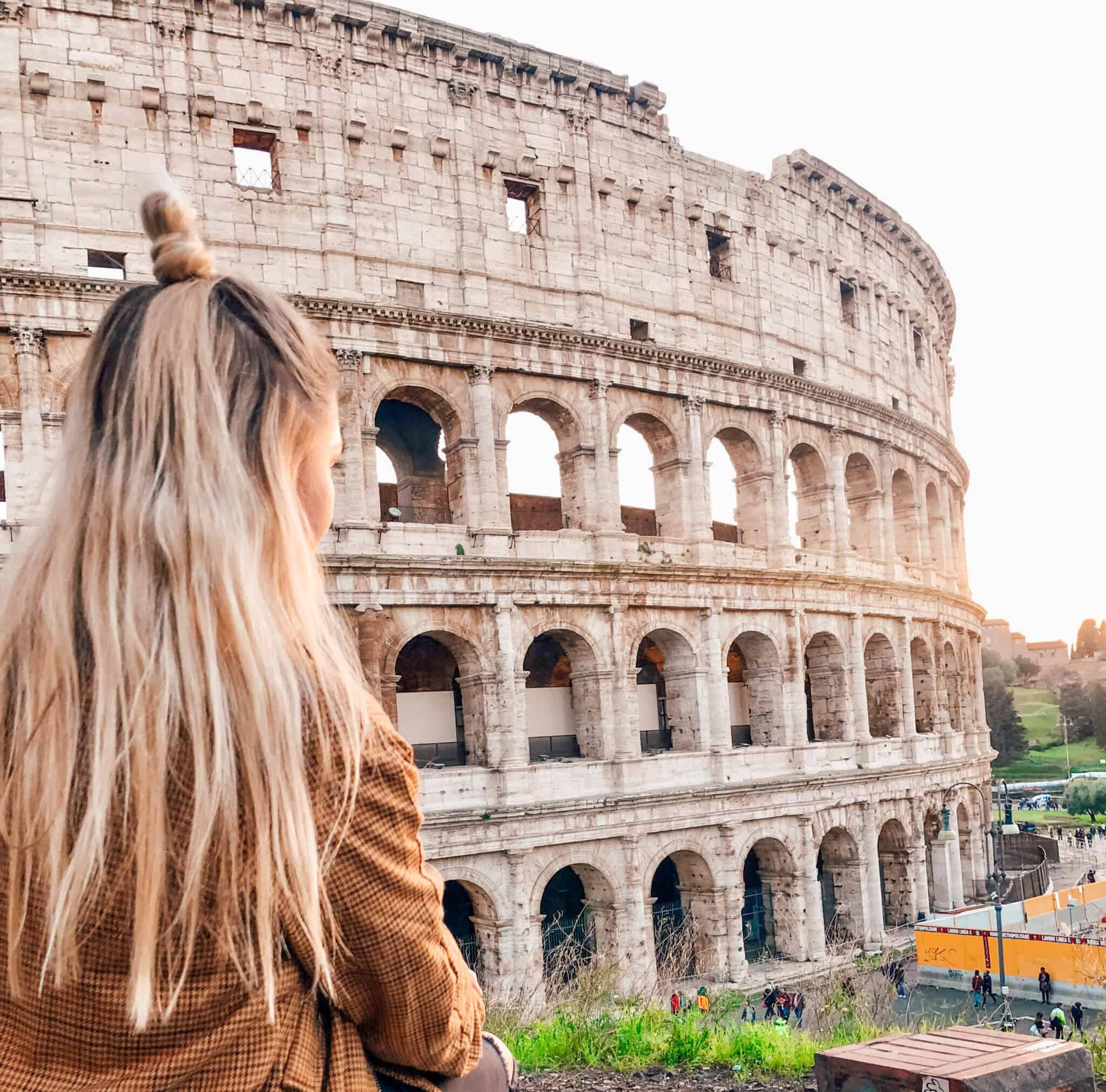 The Roman Colosseum is undoubtedly Italy’s most recognized structure.  Dating back to 70 AD, the Colosseum was used for animal and gladiator fights for over 500 years.  Standing in this giant structure will set you back hundreds of years.  It’s as though you can hear people screaming for their “team”.  The smell of sweat and tears, the splatter of blood across the ground.  One animal tearing out another animal’s throat. A truly exciting experience. And one that brought people together from all of the worlds for hundreds of years.

Needless to say, if you’re visiting Rome… don’t miss a visit to the Colosseum.  You can choose to enter the Colosseum alone or take a tour.  Beware of what tour you choose to take, keeping in mind that cheaper isn’t always better.  I used Roman Guy and couldn’t recommend them enough. We toured the Colosseum, learned about the rich history from the animals to the slaves.  From there we toured Palatine Hill and the Roman Forum.  A trio of history that has impacted the world as we know it.

For dinner, if you’re looking for a true and hearty Italian restaurant, a bit off the beaten path, check out Osteria da Fortunata. 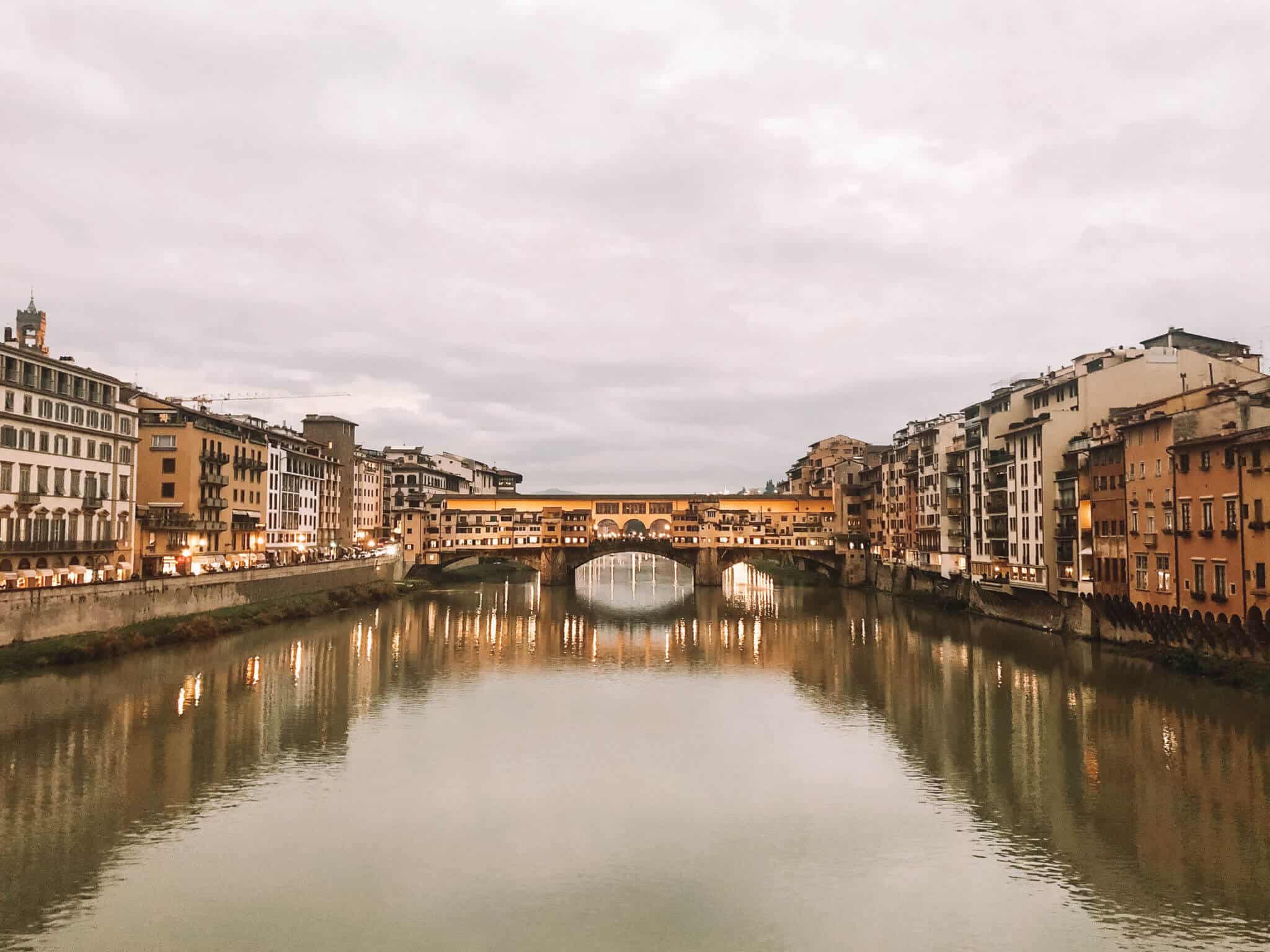 TRANSPORTATION – GETTING FROM ROME TO FLORENCE

The easiest way to get from Rome to Florence is by train.  As quick as an hour and a half ride, I prefer to use Omio when searching for transportation throughout Italy.  Please note that you’ll want to depart from Rome Termini and arrive in Florence Santa Maria Novella.

WHERE TO STAY IN FLORENCE

I would recommend staying in an Airbnb or hotel near the Ponte Vecchio Bridge, Palazza Vecchio, or Palazzo Pitti.

Upon crossing the Ponte Vecchio, make your way to Palazzo Pitti. The highlight of Palazzo Pitti is seeing The Boboli Gardens, a UNESCO World Heritage site housing a collection of sculptures ranging from the 16th-18th centuries. 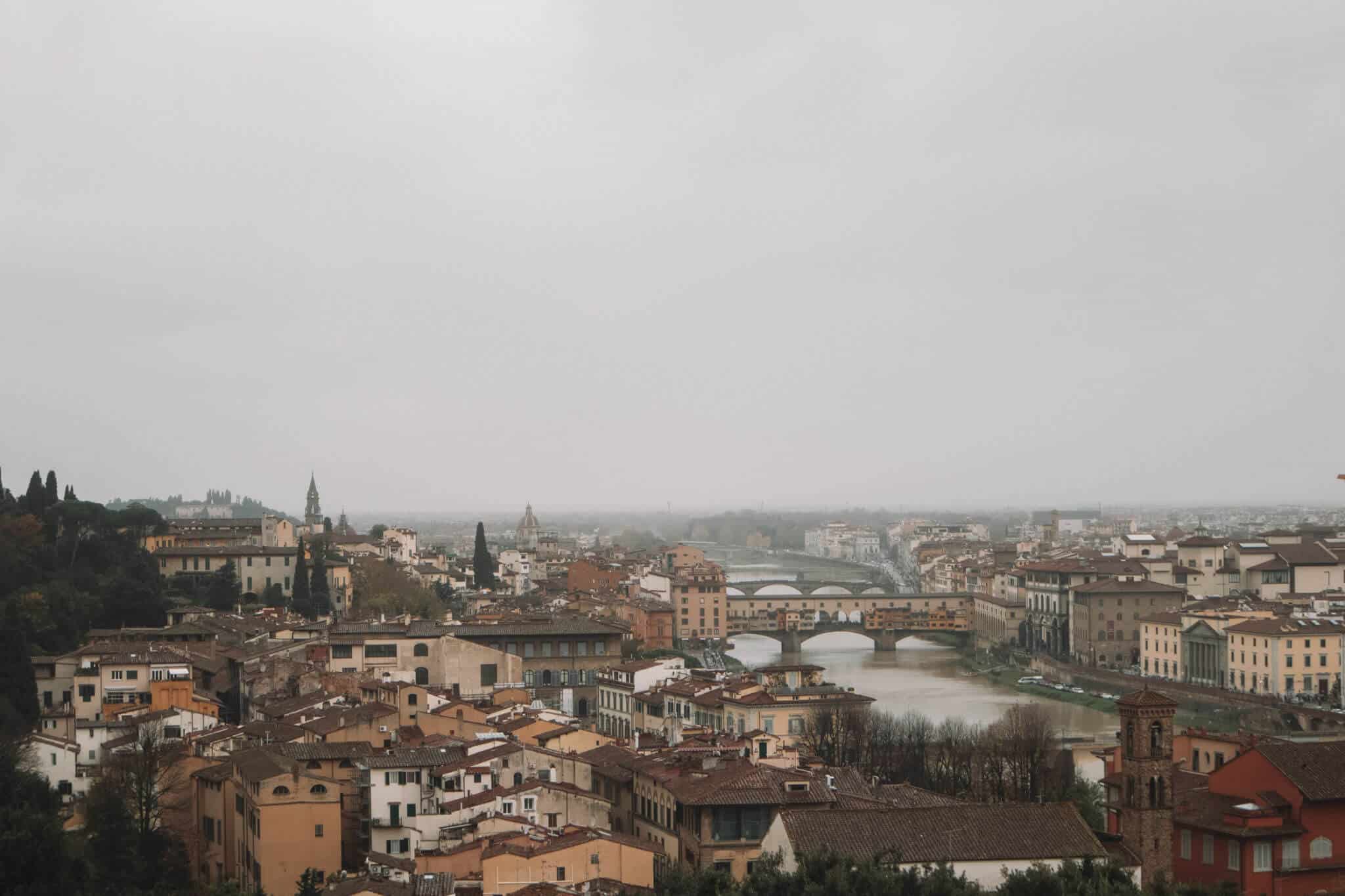 Spending a second day in Florence, make it your mission to get lost in the many streets. My favorite stops along the way are Gustapizza, for heart-shaped pizza, La Prosciutteria for wine and charcuterie, and Il Santino for Italian wine and a cozy, off-the-beaten path, feel.

After exploring the city for the day, pick up a bottle of wine from a corner store, and make your way to Piazzale Michelangelo to watch the sunset behind the city. Although you have to climb over 100 stairs to reach the top, the sweeping views of Florence are worth it. The city in front of you with its burnt orange and yellow buildings, Ponte Vecchio bridge making a walkway over the Arno River. And to the left, lush, rolling green hills.

• Alternate Route: If you want to hit more cities, spend only one night in Florence, and take the train to Bologna for a night, before departing onwards to Verona • 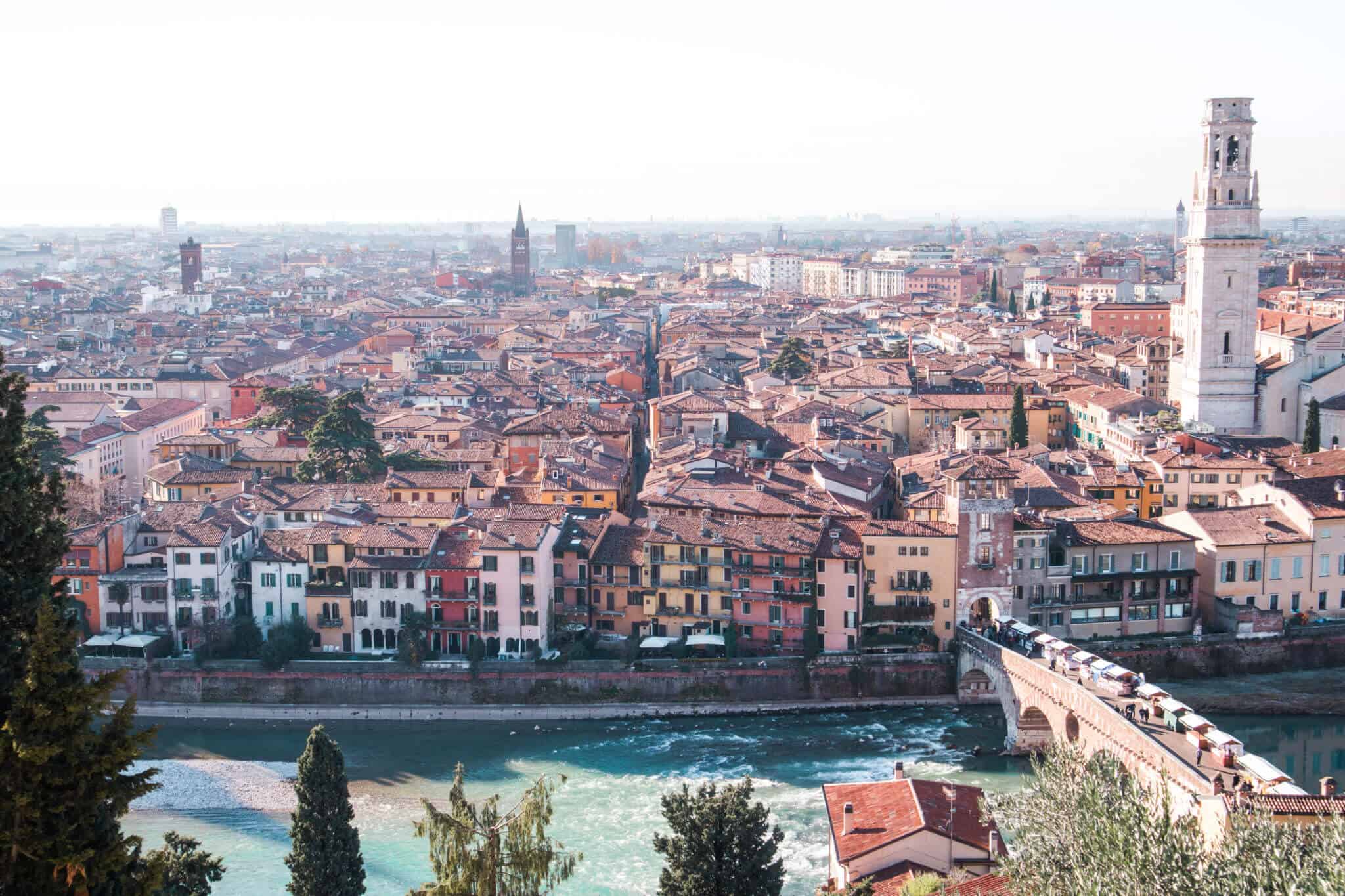 TRANSPORTATION – GETTING FROM FLORENCE TO VERONA

From Florence, the easiest way to get to Verona is by taking a train an hour and a half north.  You’ll want to depart from Florence Santa Maria Novella and arrive in Verona Porta Nuova.

WHERE TO STAY IN VERONA

I would recommend staying in an Airbnb or a hotel near Piazza dei Signori or Piazza Bra.

You’ve seen some of the best that Italy has to offer. The history-rich, capital city of Rome. The understated, bustling city of Florence. You may think that you’ve seen the best…  but you haven’t even scratched the surface.

Making your way further north brings you to Verona, a colorful Italian town with oodles of charm. Situated along the Adige River, Verona was put on the map by Shakespeare, having inspired Romeo and Juliet. A city so quintessentially Italy, with fewer tourists, and a culinary scene that can stand up to anyone else, Verona offers it all.

Getting lost in the colorful streets is truly the best way to discover Verona. Start in Piazza Bra to see the Verona Arena. An Arena that on a smaller scale, looks almost identical to Rome’s Colosseum. Eventually, make your way towards the Adige River. Here you’ll find the gem of Verona, Teatro Romano. While it costs a few dollars to enter, it’s worth it to see the views of Verona. Once you reach the top of the theatre, you’ll look down upon the turquoise river, orange roofed, multi-colored buildings, and hundreds of years of history in front of you. A chance for still and quietness, above a city bustling below.

For more reasons on why you should visit Verona, don’t miss Pictures of Verona to Inspire Your Visit 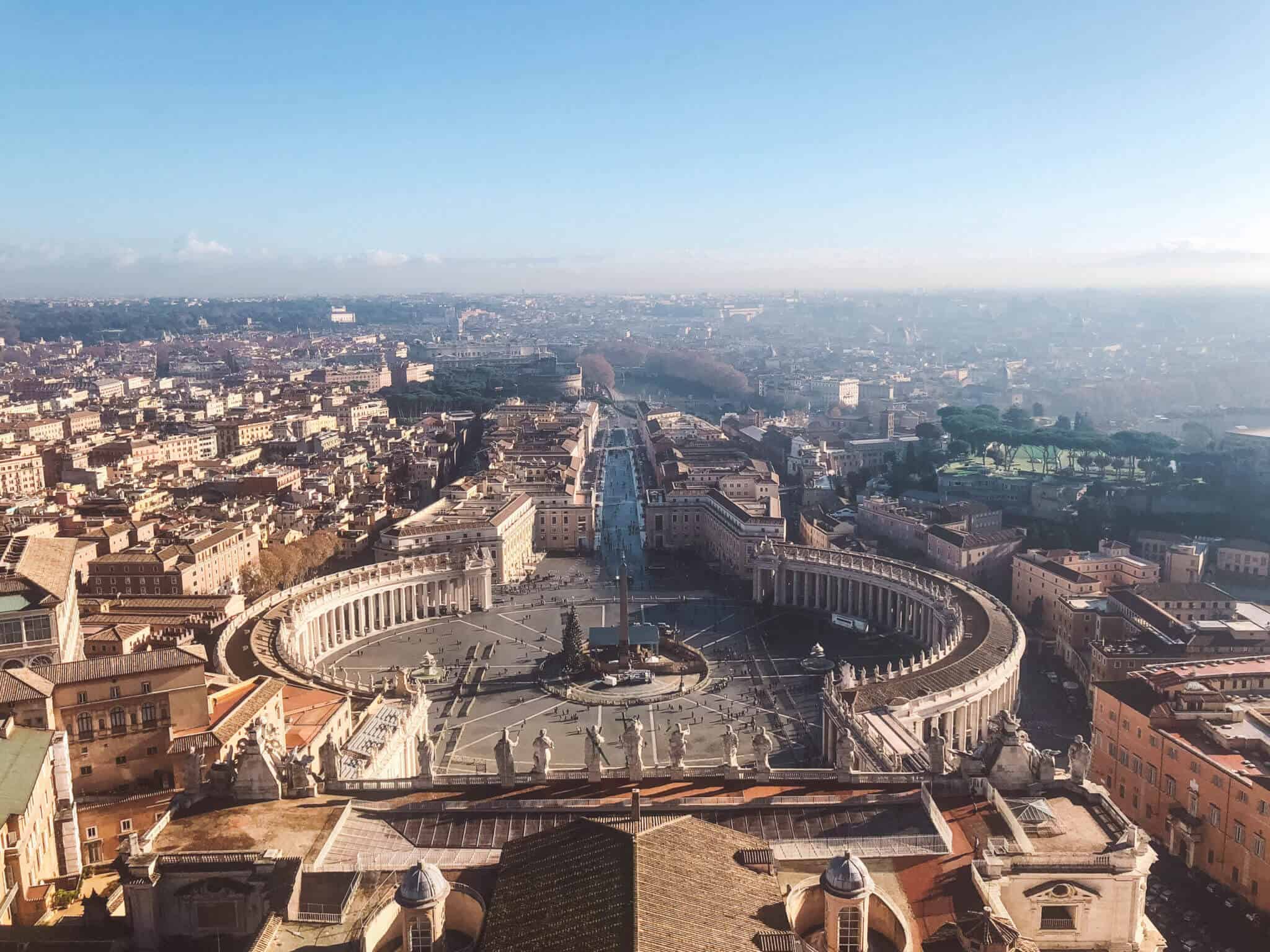 TRANSPORTATION – GETTING FROM VERONA TO ROME

Again, the easiest way to travel from Verona to Rome is by train.  The ride takes about three hours as you make your way back down south to Italy’s capital.

On your last day in Rome discover the works of Michelangelo, visit a city within a city, and climb the largest basilica in the world for views overlooking the Eternal City. All three wonders can be found in Vatican City, a city-state within a city, founded in the 1900s. Currently, Vatican City has a population of over 1,000, uses its currency, and houses the Pope.

Entry into Vatican City costs 17 Euros and also allows entrance into the Sistine Chapel. The Sistine Chapel is where you will find Michelangelo’s work, The Last Judgement, adorning the walls and ceiling. Truthfully, the most exciting part of Vatican City.

St Peter’s Basilica can also be found in Vatican City, a renaissance church where Saint Peter was buried. Entrance into the church is free, while the climb to the top of Basilica for the views of Rome costs 10 Euros for the elevator, eight for the stairs.

All three sites are worth the visit, you have to decide if you want a tour guide, or to visit on your own. While a tour guide from the Roman Guy will allow you to visit before hours, granting you privacy and quietness as you move through the Vatican; it wasn’t my favorite tour I’ve gone on.

WEDNESDAY – Depart Rome, fly back to the USA 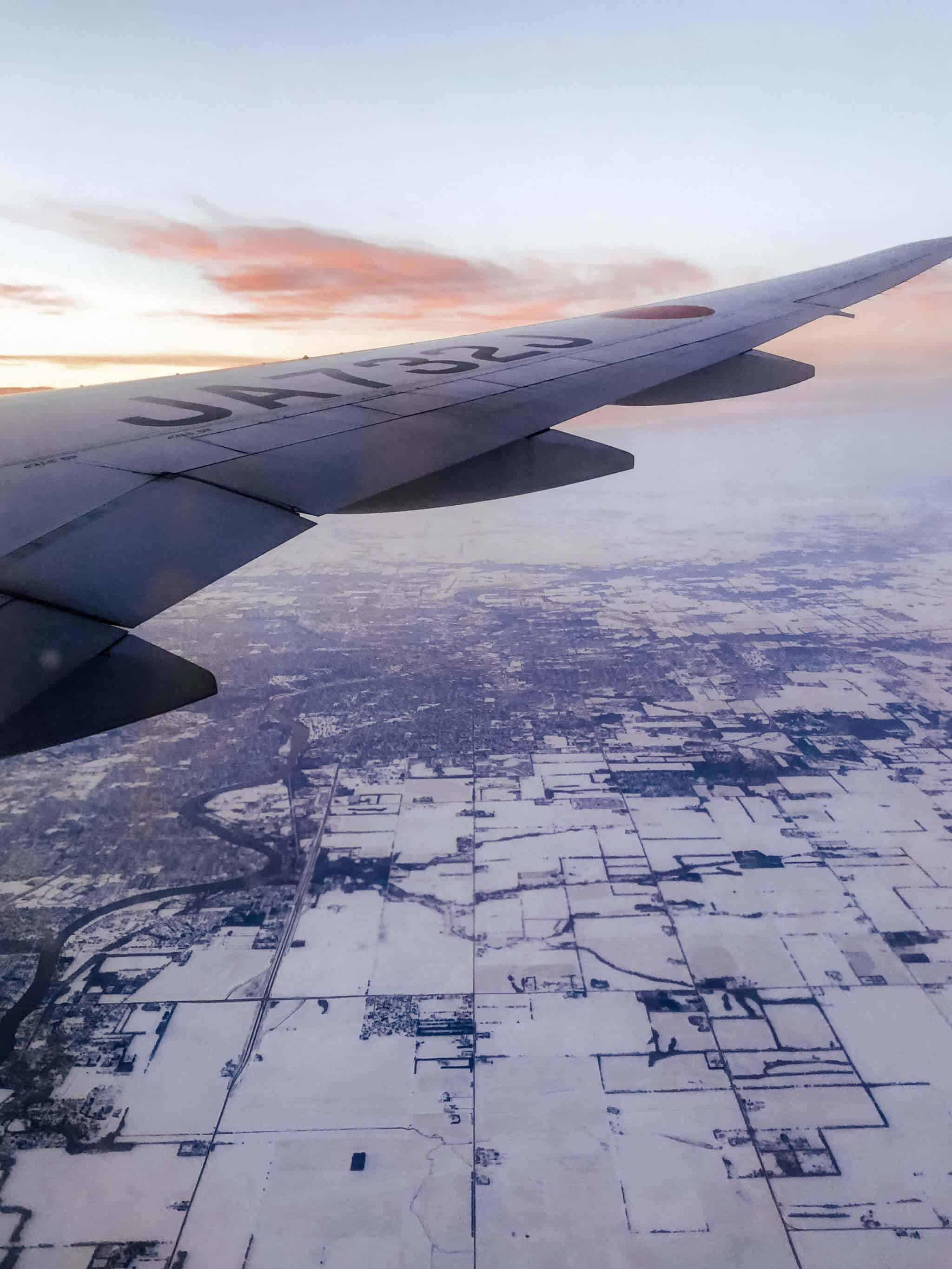 Because Italy is ahead of the US time-wise, you should be able to leave Wednesday and arrive back in the States on Wednesday.  Just in time to clock in for your shift on Thursday!

Things to Know About Italy

END_OF_DOCUMENT_TOKEN_TO_BE_REPLACED

Spending the Day in Healdsburg – The Best Healdsburg Wineries to Visit

8 Apps You Need for Transportation in San Francisco