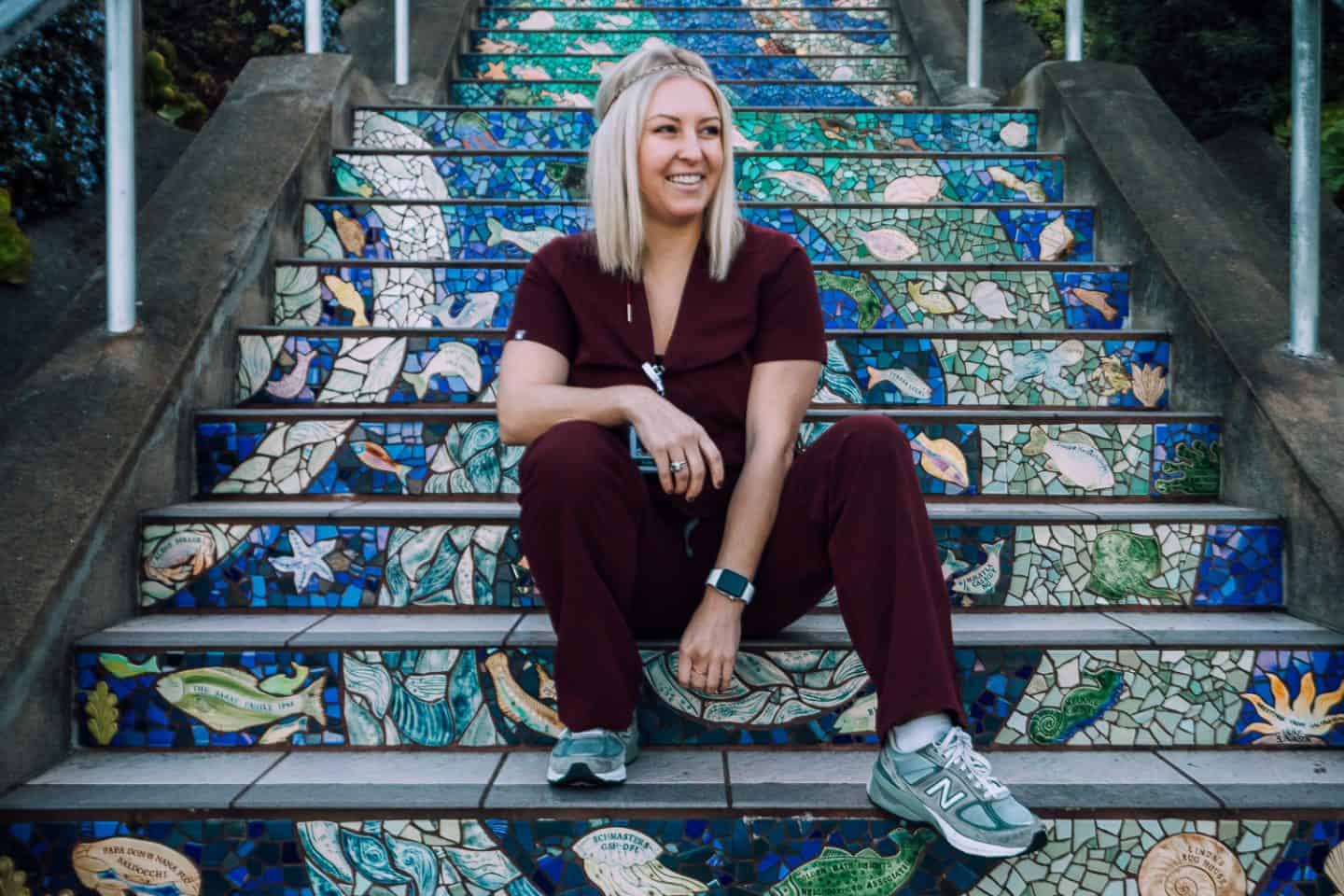 As a travel nurse of 4+ years, I’ve been able to work with four different travel nurse companies.  I can spot a great company (or recruiter) a mile away, and I can definitely sniff out when a company is acting sketchy (or a recruiter is acting sketchy).  For two of my assignment, I worked with American Mobile, having two different recruiters, and on both assignments, I had major issues with American Mobile.  Before reading any further, I want to make it clear that this has been MY PERSONAL experience with American Mobile, and I don’t speak for anyone else besides myself.  I’d also like to mention, that I believe a bad recruiter can ruin a great company just like a great recruiter can elevate a bad company.  (Read about my thoughts on that here).  This post isn’t about recruiters though, although they may have not helped my experience.  But instead, this post is about why I think American Mobile is a shady company and why I think every travel nurse should be cautious when working with them.

Looking to work with a good travel nurse company?  Check out this post:  Travel Nurse Agencies Ranked by Travel Nurses

Why You Should Be Cautious When Working With American Mobile 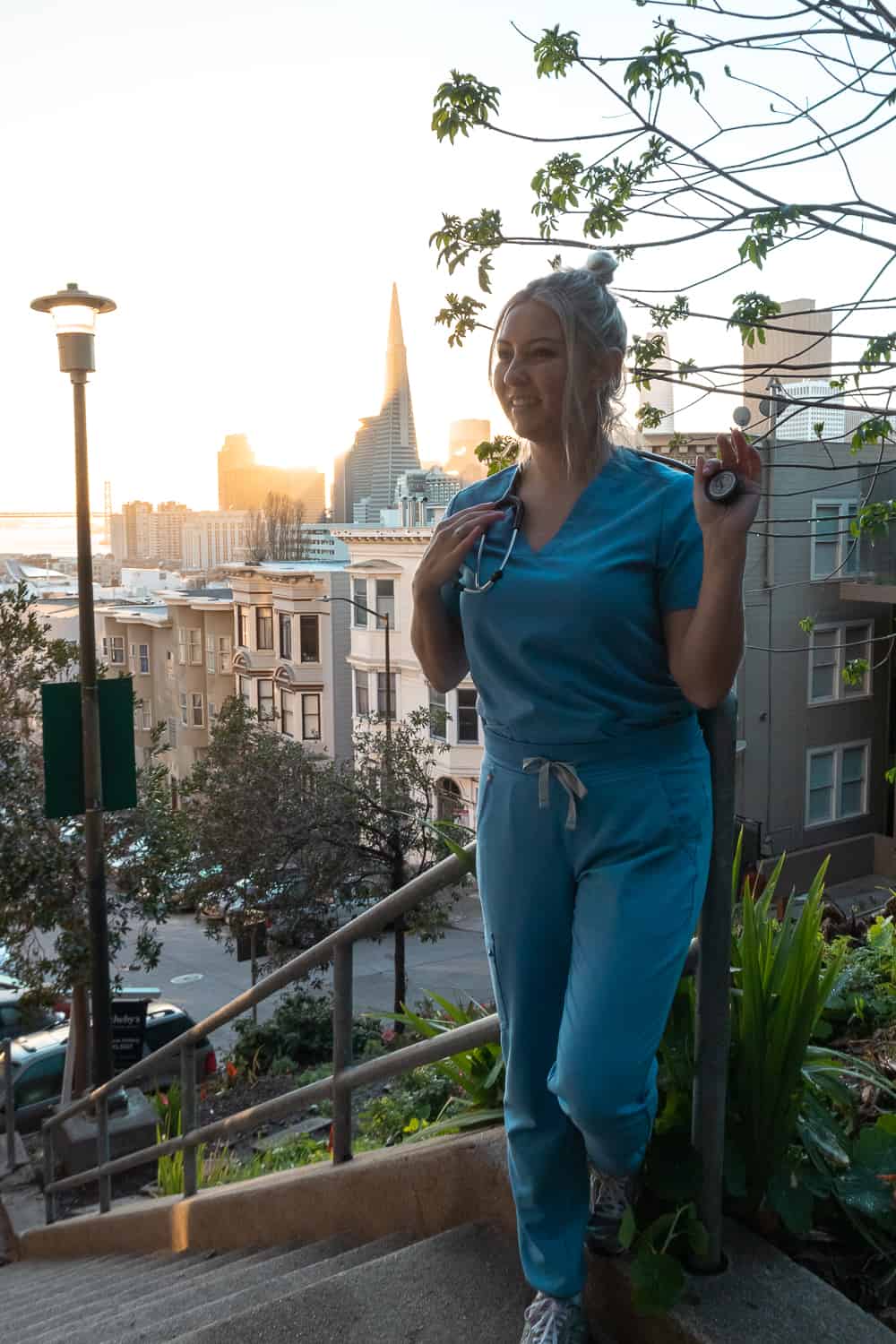 Never have I ever had to be so meticulous when reading my contract.  Nor have I ever had to put every little thing in writing like I did when working with American Mobile.  For example, I requested to be reimbursed for my California, RN license that was expiring.  In the past, working with Fusion Medical, I never even have to bring that up – everything is just reimbursed, no questions asked.  However, with American Mobile, I had to request it, and even then the recruiter tried to take money out of my paycheck to pay for it.  New travel nurses – you should be receiving a pay package and THEN on top of that also be reimbursed for expiring certifications/licensures.  You should not have to fight for this.

Need more guidance on negotiating your contact?  Read How to Negotiate Your Travel Nurse Contract – What’s Worth Negotiating and What isn’t

2.  You Have to Triple Check Your Paycheck

If you choose to work with American Mobile, be prepared to check your paystub every single pay period.  If you have a week where you worked extra for some reason, I’d even recommend calling payroll and ensuring that everything is submitted correctly to ensure an accurate and timely arrival of your weekly pay.

3.  Your Housing & Meal Stipends Won’t Start Until the First Day of Your Contract

What this means is that your first week of work, even if you clock a full 36-hours, you will miss out on your housing and meal stipends until the first day you’re working.  For instance, if your first day of orientation is on Tuesday (which can be common), American Mobile won’t pay you your housing and meal stipend for Sunday or Monday REGARDLESS of working a full 36-hours.  Even if you have to do pre-work modules, your stipends won’t be paid out until you’re showing up in person.

In my experience of working with other companies, this is unique to American Mobile.  If I start work on a Monday, usually my week stipend (Sunday-Saturday) is paid out in full, no questions asked.  With American Mobile, this is not the case.

Of course, I fought this idea tooth and nail.  I read and re-read my contract, and even read the employee handbook.  And not only is this not listed in the contract, but it’s also not listed in the employee handbook.  When I asked my recruiter about this she told me, “American Mobile is a business and this is how we make money”.  I then called someone in payroll to ask about this and they said, “Your recruiter can give you the money if they wanted to”.  Finally, I reached out to my recruiter’s director who told me, “We don’t pay out the stipends on week one because of the IRS and we’re trying to protect you”.

Two days after speaking with the director, my recruiter called to tell me American Mobile would be changing this rule (that they have in place to “protect us from the IRS”), and that stipends will be offered for each day of the week despite your start date.  Being curious, I spoke with an attorney about this and the attorney told me, “Anytime someone in the company blames the IRS, they have no reason that they are doing what they are doing and typically say that to make you stop asking questions”.

In my opinion, American Mobile operating like this is bad optics and bad business.

If you’ve read the beginning of this article, by now you may have gotten the picture that American Mobile places themselves first, and you, the traveler, second.  I don’t appreciate or prefer to work in an environment like this.  I find it stressful knowing that if push came to shove, American Mobile would not have my back and that I’m more than likely being screwed over in some aspect of my contract.

For more on why it’s important to work with a transparent company, read Your Guide to Travel Nurse Pay + the Importance of Transparency in Travel Nursing

5.  There is Very Little Support

I tried to handle my issues with American Mobile like an adult, by emailing and calling the correct people in the company to voice my concerns with issues I was having on assignment and with my contract.  There was no support.  Nobody would call me back.  Nobody would email me back.  In fact, both of the recruiters I worked with in my time at American Mobile were incredibly hard to get ahold of.

Another point to mention, I received a satisfaction email when on assignment.  I filled out the form stating I was not satisfied working with American Mobile and I received an email stating that somebody would follow up.  Someone did follow up, but it wasn’t until months later after my assignment was over.

6.  They Try to Steamroll You

I was speaking with a new travel nurse who told me that American Mobile tried to submit her to an assignment without sending her the pay package first, stating, “We talk about pay after you’re submitted”.  New travel nurses.  If you take anything away from this blog post, let it be this:  That is, positively, UNTRUE.  Pay should be talked about well before you’re being submitted to an assignment because it is then that you can negotiate.

If you’re submitted to a hospital by one company, you’re not allowed to be submitted to that same hospital by another company.  So if it’s somewhere that you want to go, and you’re submitted without talking about the pay, and then the pay package comes back low – you have no negotiating power.  You can’t take the job with another company, and at this point, they have no reason to increase your pay so you’d either have to accept it or find a different assignment.

I talk all about pay packages, negotiating, and spotting red flags in The Ultimate Travel Nurse Bundle.  It’s a complete guide (from start to finish) to becoming a travel nurse!

On one of my assignments, I was missing a bonus that was supposed to be paid out on my last paycheck.  My recruiter told me that we were waiting on payroll to pay that out, so I called them to make sure that that was correct.  Payroll told me that they were waiting on my recruiter, and it wasn’t their call to make.  They would not speak to each other, and I had to be the middle man figuring out how to get my bonus that was given to me.

I went back and forth between my recruiter and payroll several times.  And my bonus was delayed weeks.  This is unacceptable and something a traveler should not have to do.

As I stated earlier, I’m sure that there are some great recruiters at American Mobile.  But this post isn’t about the recruiters, instead, this is a post aimed at explaining the intricacies of travel nursing, and pointing out that while American Mobile is one of the biggest travel nurse companies out there… it doesn’t mean that they are the best to work with.  And in my opinion, this is a company that I would not waste my time with again. 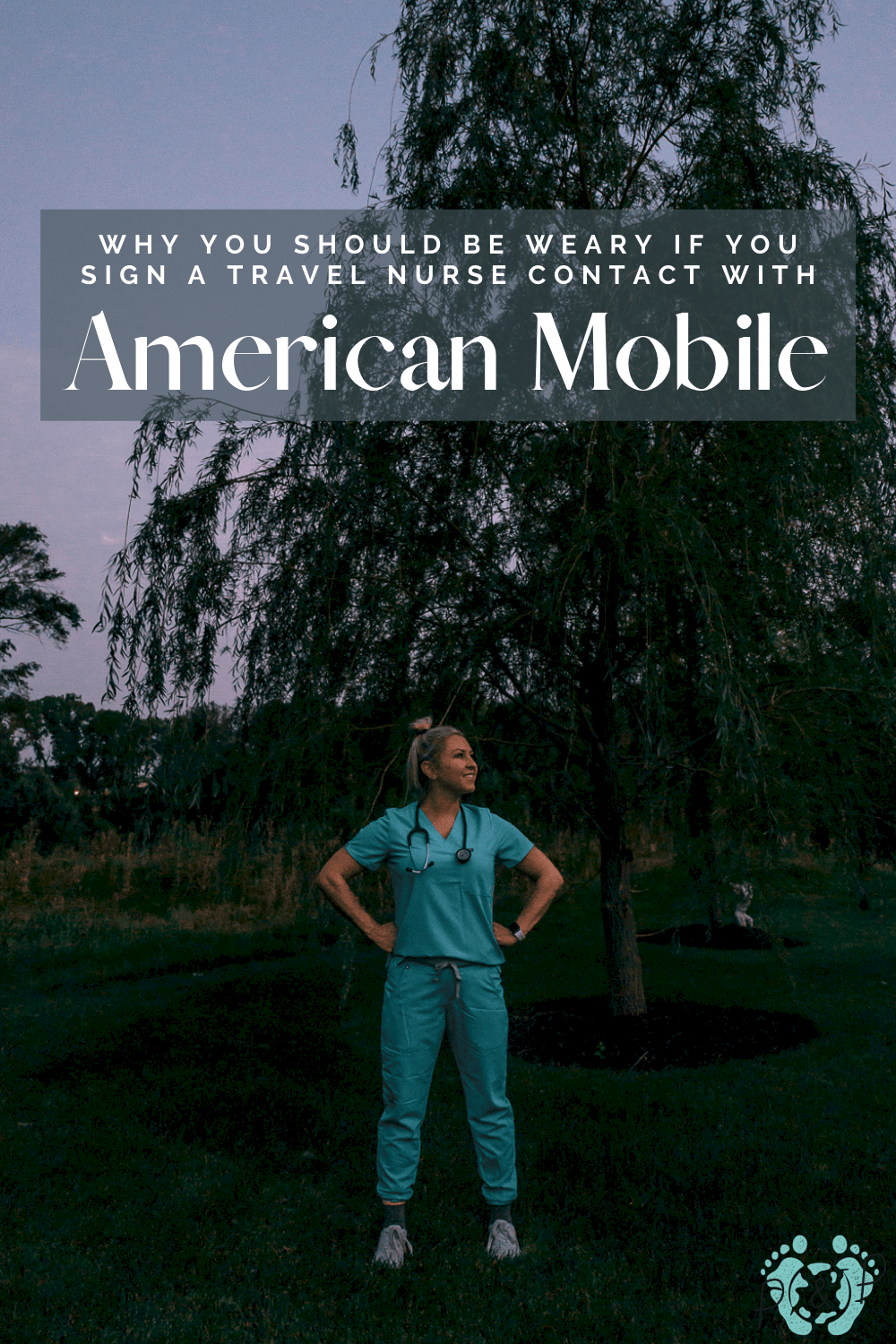 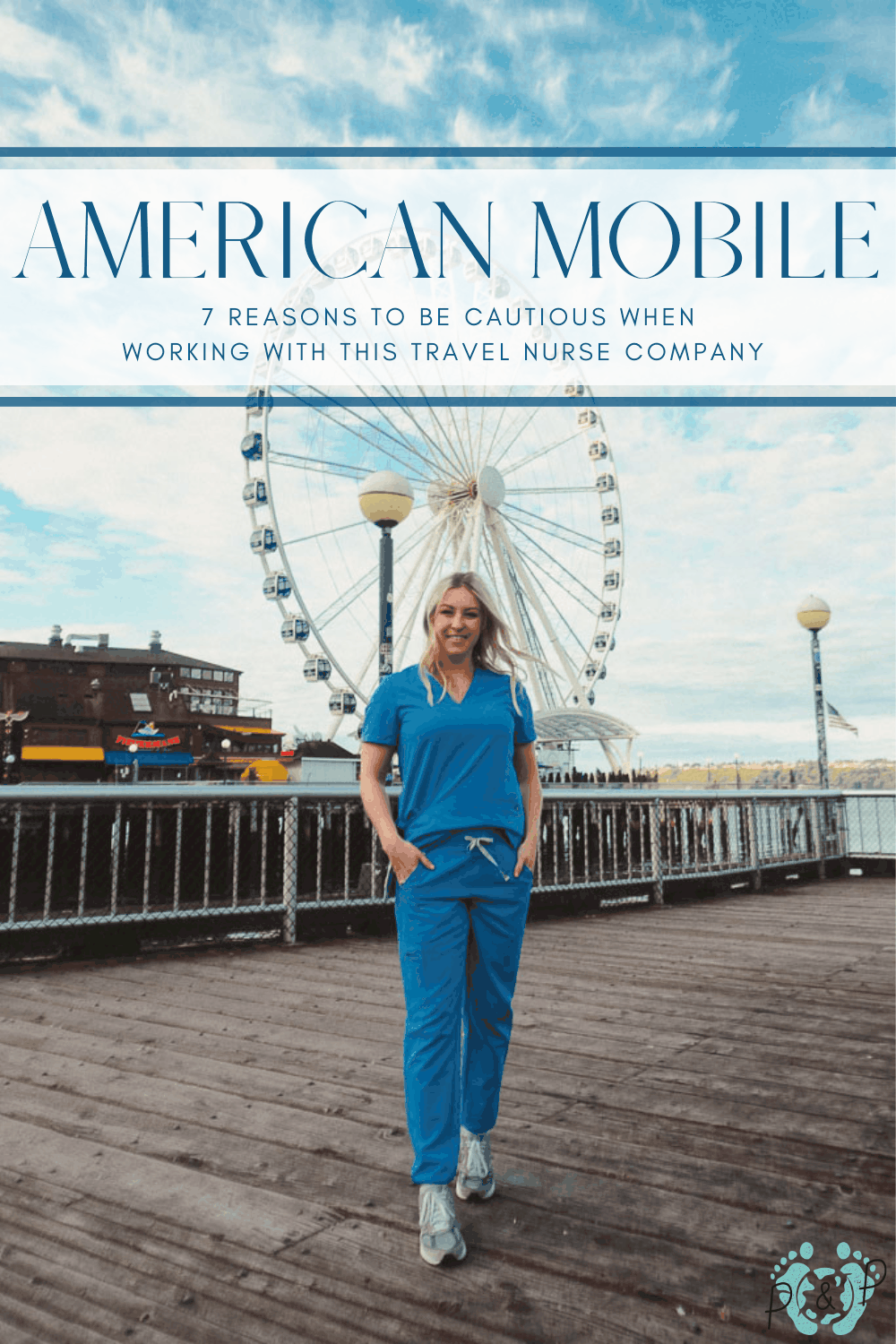 END_OF_DOCUMENT_TOKEN_TO_BE_REPLACED

The Best Things to Do in Paso Robles

10 Affordable Countries Every Nurse Should Visit

How to Stay Healthy As a Travel Nurse